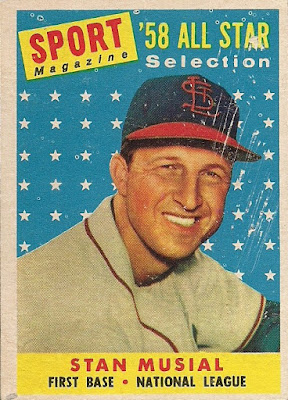 I've already reveled in those years, from 1975 to 1981, when Topps did this. I compiled a countdown of the best cards and everything.

But this actually was a very brief period in Topps' history. Sure, it corresponded with my childhood, but many other collectors, both before and after I was collecting cards as a kid, are more familiar with another way to acknowledge All-Stars -- by producing an extra card.

This has been a common Topps practice for years, pretty much an exclusive of the Update set now. But long before that, before I was even born, Topps was offering extra cards of All-Stars. It did so in the late 1950s, with impossibly-difficult-to-collect high number All-Star cards like Stan Musial here. 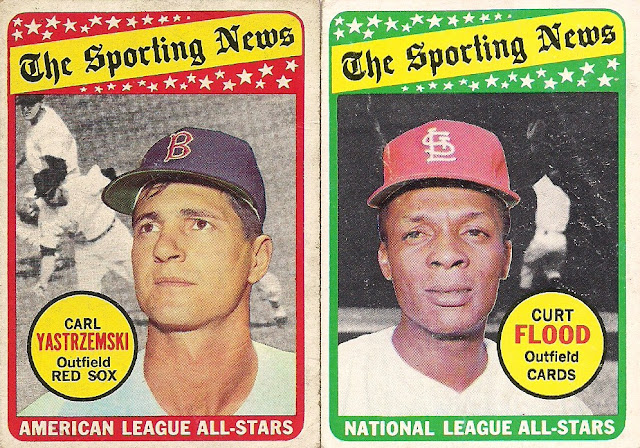 And it did it again in the late 1960s with cards like these. I particularly enjoy the 1969 versions because the border colors cooperate with my AL/NL synesthesia.

But I admit, part of my problem with these "extra" All-Star cards is that they've just been so unobtainable for most of my life. The late '60s cards aren't all that difficult to find, but really any star card from the '50s or '60s is a hassle for the wallet these days. The '70s cards -- because I collected them -- seem more accessible.

Thank goodness for the '80s.

The '80s took the "second all-star card" of the '50s and '60s and made it its own. Topps couldn't put out a flagship set without featuring extra cards of all the All-Stars, and getting those cards went from "holy crap, I have this card" to "another Ryne Sandberg All-Star card again?"

But I don't want to focus on the pervasiveness of '80s All-Star cards on this day, which also marks the 40th straight time I've watched the All-Star Game.

Instead, I want to acknowledge the set that at long last allowed me to complete the "extra" All-Star set. And that would be 1982 Topps, the first time Topps featured extra All-Star cards for each individual starter since 1970.

Here is the first All-Star "team set" that I was able to complete: 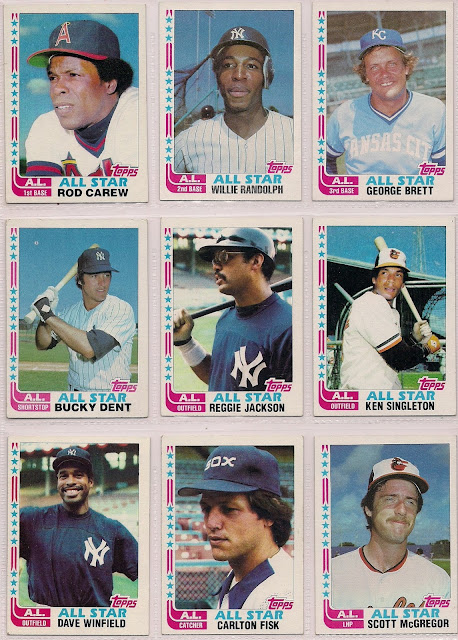 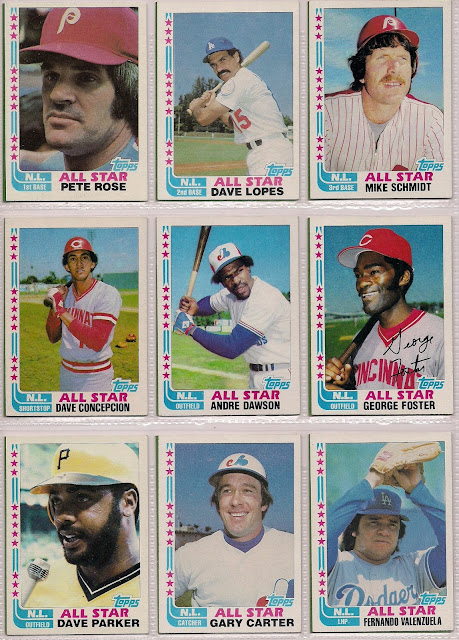 Like the previous year (in which there was no extra card), Topps added two extra All-Stars, presenting two starting pitchers instead of one, and throwing in a relief pitcher.

Such tinkering made me automatically suspicious of the other Topps All-Stars, but they're pretty accurate. All of the position players featured started in the 1981 All-Star Game. And Tom Seaver and Bruce Sutter played, too. Scott McGregor and Rich Gossage didn't play in the game at all, although both were named.

Now, let's go through the usual "Joy of a Team set" categories: 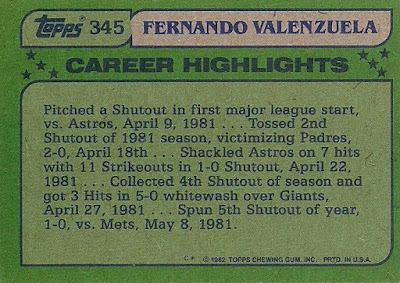 The All-Star backs are an achingly boring recitation of statistical achievements ('80s Topps backs are the worst). But Fernando's card back sucks you into what Fernandomania was all about. You can almost hear the cheers reading it.

Team's claim to fame: The two teams signaled the official end of the players' strike as the All-Star Game was the first game after two months of silence. The National League won 5-4 and Gary Carter was named the MVP after hitting two home runs.

Players I've talked to: None. I assigned someone to interview Rich Gossage once. 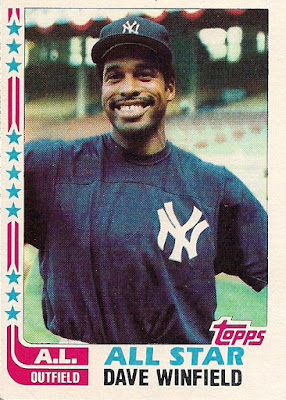 The cropping on the Dave Winfield card is rather unfortunate. He looks like he has no arms. 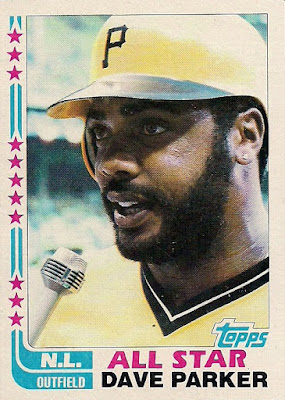 The '82 Topps All-Star set wasn't perfect. I'm not crazy about the fact that the AL and NL teams are separated in the set (NL is cards #337-347 and AL is #547-557), and back then I hated that I was collecting a second card of the same player (actually a third card because the "In Action" cards appeared in '82, too).

And, it's true, you could have assembled a "team set" of All-Stars between 1975-81. But, still, this was an achievement just because I never thought I could do it when I saw those 1969 All-Star cards for the first time.

I hope you enjoy the All-Star Game.

If you can't, well, at least there's cards to collect.

Cards That Never Were said…
Never noticed that Foster was the only one with the "autograph" on his AS card. Also why is the version without the signature referred to as "Blackless"?
July 15, 2015 at 2:54 PM

night owl said…
I don't really pay attention to variations like this, so I can't answer other than I believe there is a whole "blackless" set for 1982 Topps in which regular base cards don't include facsimile autos (black ink ran out on printing press), and they were somehow mixed in with the regular base cards. How this corresponds with the Foster card, I don't know.
July 15, 2015 at 4:45 PM

Fuji said…
Always enjoyed collecting these all-star cards when I was a kid... especially in 1982 and 1983. I'd get all excited to find guys like Jackson who had three different cards in the set. For some reason, it just looks so cool to see his base card, all-star card, and in-action card lined up in a 9-pocket page. The same thing goes for 1983... where my all-star Pete Rose is joined with his base card and super veteran subset card in my 80's binder.
July 16, 2015 at 9:20 AM