A little over a year ago, I wrote about the early 1960s Post and Jello cards and their similarities and how I still don't have a single Jello card in my possession.

While Post cards ran between 1961-63 and I believe were available pretty much everywhere, Jello cards appeared only from 1962-63 and their availability was restricted mostly to the Midwest.

So, it took someone from the Midwest to finally get me my first Jello card.

Tom from Waiting 'Til Next Year recently announced that he had discovered a bunch of 1961 and 1962 Post cards at his card shop and dug out several in hopes of helping people complete their Post sets. You see, Tom lives in Illinois, which I am now convinced is the center of the card collecting universe. There seems to be a card shop or card show or flea market on every block. As a trade off, nobody cares whether there's a place for you to go to the bathroom at the Cubs game, but that's a trade I'd make in a second. Just let me work on my bladder exercises.

So I jumped quickly on the opportunity for someone with a respectable card shop to find some cards for me.

But sadly, even in Illinois, everyone is a Dodgers fan.

Tom said that someone beat him to most of the Post Dodgers. But he was able to find two. 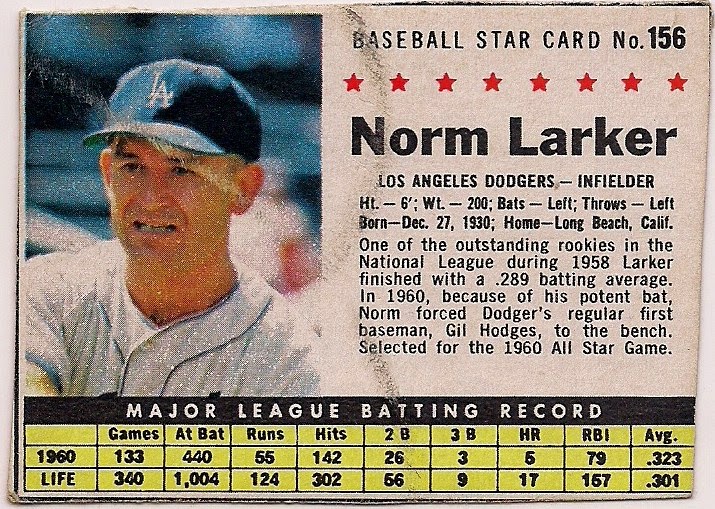 That's a 1961 Post Norm Larker card. Larker looks like he's wincing from whatever marked up this card. It was possibly stuck to the bottom of someone's shoe for a short period. But I will not quibble about the condition of my cards cut off boxes. 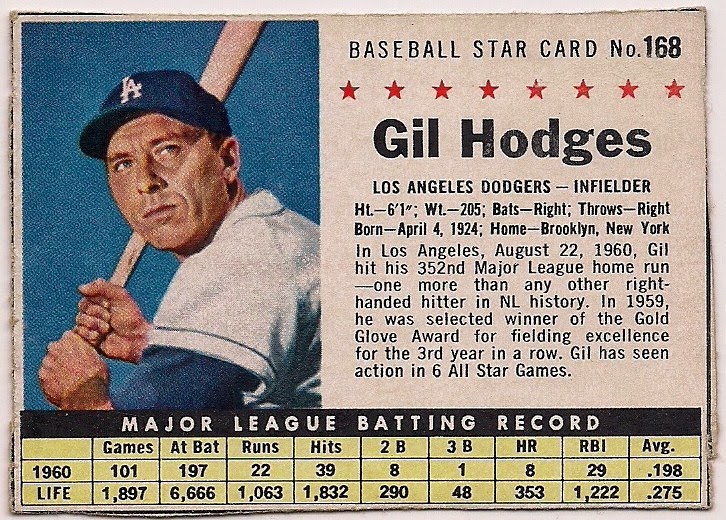 Look at that. A very cool 1961 Post Gil Hodges, basically the last time you'd see him in a Dodgers uniform. Drink in those 6,666 at-bats. Awesome.

I was very happy to get those two cards off my want list, but Tom perhaps felt the package was a little bit wanting.

He sent this note of explanation with the cards: 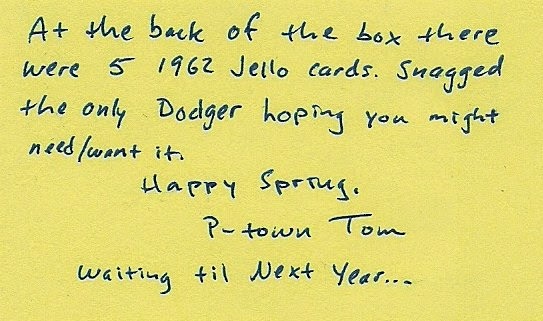 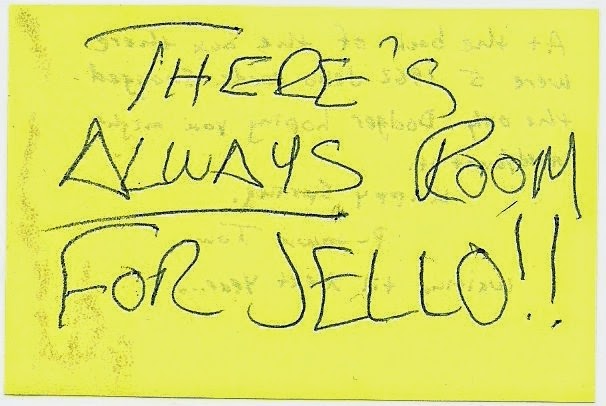 I've always wanted to say that in a baseball card context.

And here is the very first Jello card in my collection: 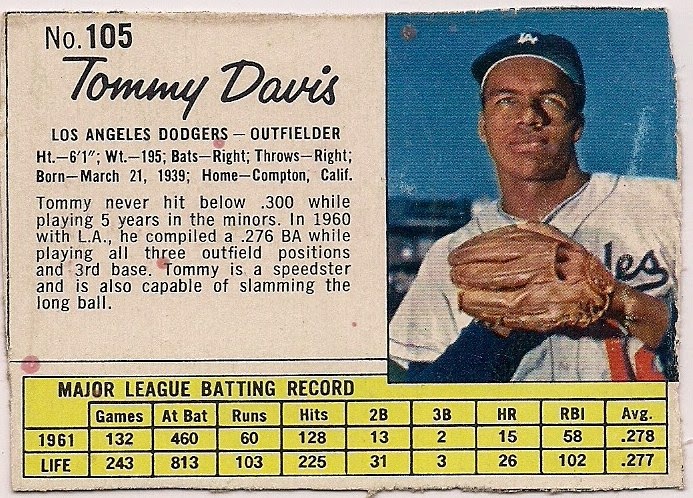 Wow. Let's gaze upon it for a little while.

All done? Well, we can come back to it later. 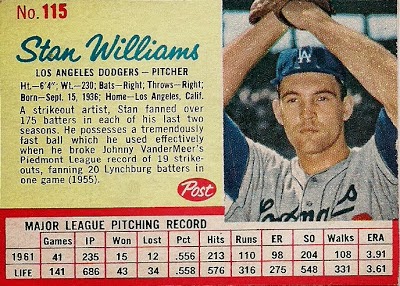 The thing that boggles my mind about the Jello cards -- a little about the Post cards, too, but mostly the Jello ones -- is how many of these suckers exist in the set.

This underlines for me how unimportant it was at that time to complete sets. It was simply enough to have a few cards and try to trade them for one or two of your favorite players. Who on earth would think of attempting to complete 200 different cards off the side of a Jello box in 1962?

But, like the modern set collector I am, once I received the Tommy Davis card, I dutifully wrote down all the numbers for the Dodgers for both the '62 and '63 Jello sets in my want list. The 1962 collector may not have dreamed big --hell, not even 1976 night owl had any thought of actually completing a set -- but grown-up night owl has many, many, many completion goals.

OK, right, you wanted to look at the Jello card again:

Zippy Zappy said…
So baseball cards came with cereal boxes, potato chips, cakes that gave you diabetes and jello. Man, if only the world was convenient enough for that to still be true today.
April 9, 2015 at 8:58 PM

P-town Tom said…
I totally agree. If Topps and Panini knew what was good for them they would start inserting baseball cards in everything from string cheese packages to Ding Dongs. Get the youth of America hooked on cardboard at an early age.
License or no MLB license, I would buy some food I wouldn't normally toss in cart just for the cards... and probably add fifteen quick pounds in the process.

Tony L. said…
I am planning a post on this coming up. There are so many opportunities for local marketing with local corporate sponsorships to national marketing with food companies and the like.

Fuji said…
You make a great point. It should be a challenging, yet entertaining project for you to build these team sets. And I wonder how many people have actually built the 200 card set. That's just insane.
April 10, 2015 at 11:03 AM