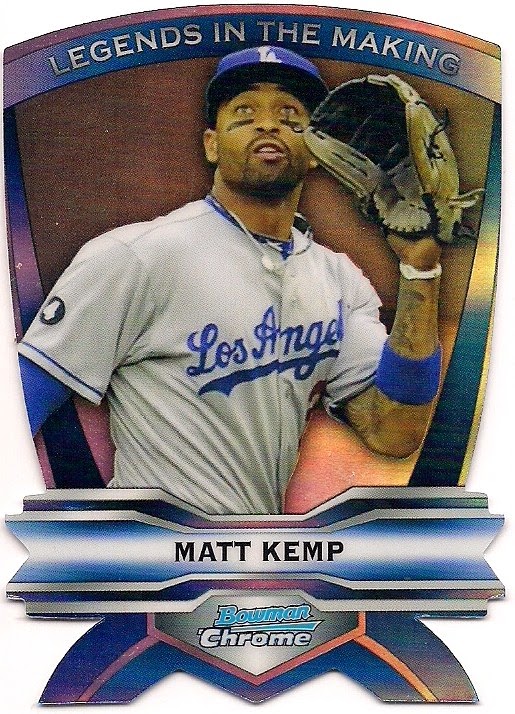 There isn't a thing about the morning that I prefer over the night.

My job and my personality dictate that I rarely wake up before 10 a.m. or hit the sack before 3 a.m. I prefer it that way.

The morning to me is loud, abrasive, and much too bright. Alarm clocks are a horrible invention. The thought of an egg sandwich from a McDonald's drive-thru makes me nauseous. To me, coffee-drinking borders on cult-like behavior. And grim-faced 7 a.m. drivers appear all too willing to run you down. Morning TV news shows seem like a plot by a futuristic government: pummel these civilians with stories of death and human twistedness so that they're too demoralized to demand anything. I don't even like the sun shining from the east. The angle is all wrong.

If I am up before 10 a.m., it's usually because of an illness, an automobile issue or another Very Adult Problem. Can we pleeeeease just dim the lights and all go to sleep 'til noon?

Night, on the other hand, is when all the best things happen. No, I'm not talking about crime -- those people don't know how to handle night. But you know what I'm talking about. I'm pretty sure that statistics somewhere say romance is a creature of night. Virtually all of my past girlfriends were discovered at night. Entertainment is generally more available at night -- music, parties, baseball games, whatever. And, best of all, you have time to do things at night that you don't have the time to do during the day.

I operate more efficiently at night. I smile more at night. I've had a good 6 or 7 hours to warm up, and I'm ready to go. It's 9:30 p.m. and I'm talkative, charming (some say), interested and productive. The moon is high, and so am I -- or something like that.

So with all this in mind, there is a card blog called "I Love the Smell of Cardboard in the Morning". Note the "morning" in the title. The blog operator, Tim, recently sent cards to me, operator of "Night Owl Cards". Note the "night" in the title.

Now, how was this collision of worlds going to turn out?

Although I'm well aware Tim's blog title is a take-off on the famous Apocalypse Now quote, I have never smelled my cardboard in the morning. I have smelled cards at other times of the day. But in the morning? I would never subject my cards to the morning.

Baseball cards are best pondered at night, in the wee hours, when everyone is sound aslee ... it's RIGHT THERE on the sidebar!

Still I am aware that everyone is different, even baseball card collectors, and I was looking forward to seeing what happens when a "morning blog" collides with a "night blog".

Tim sent me about 30 different Dodgers cards, a wide variety.

How many were new to my collection?

Well, not to toot my own hoot, but you've got to get up pretty early in the morning, Mr. I Love the Smell of Cardboard in the Morning, to find a Dodger card I don't have.

The Legends In The Making Matt Kemp at the top of this post -- a fine card by the way -- didn't make the cut. 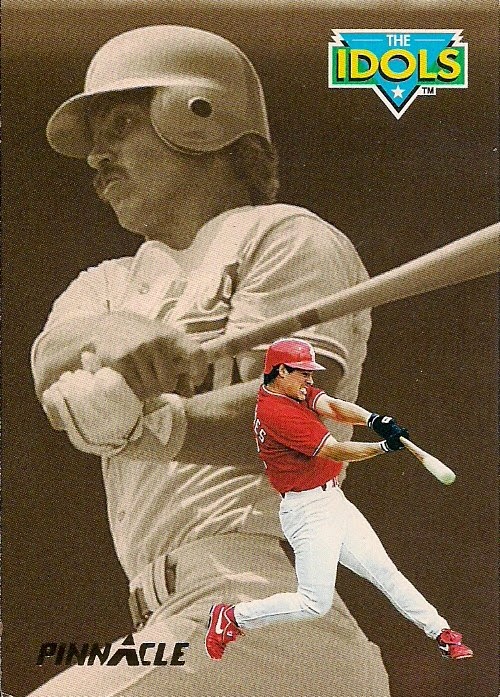 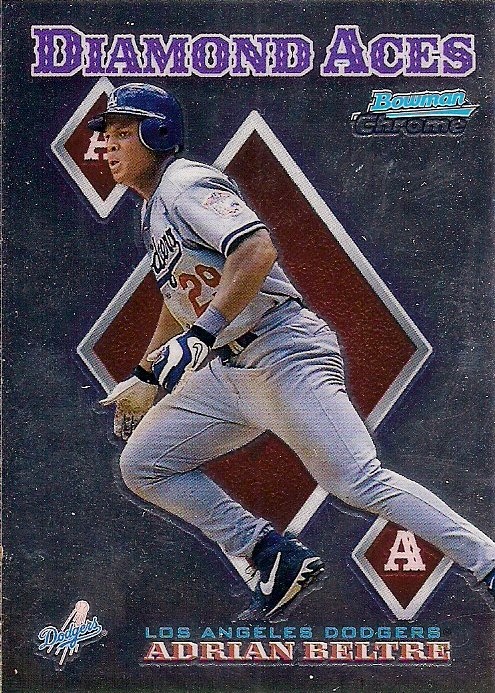 Neither did these beauties.

But smelling cardboard in the morning did pay off because six well-sniffed cards slipped into my collection.

Let's get a look at them now that it's at least dusk in this part of the world: 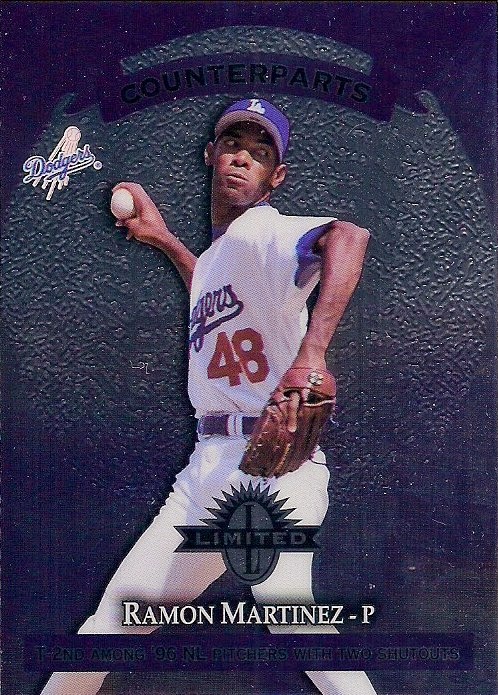 All right, maybe it's too dark out -- or more likely my scanner still hates late '90s cards.

This is a Leaf Limited Counterparts card of Ramon Martinez. The Mets' Bobby Jones is on the other side, but he'll never see the light of night. 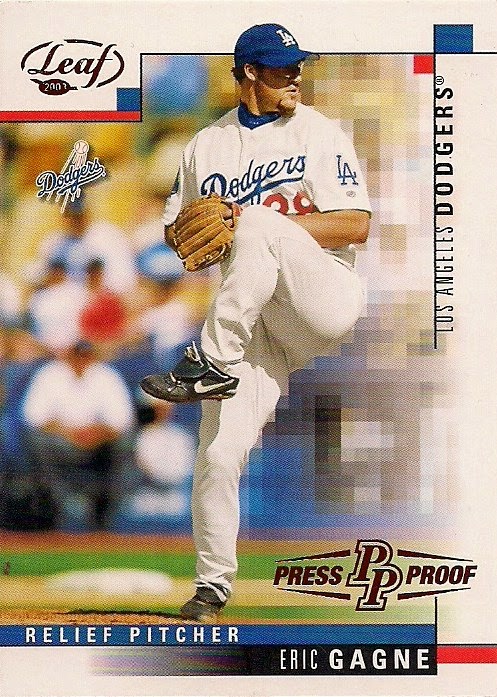 Here is a Press Proof parallel of Eric Gagne from 2003 Leaf. Someone needs to shed some night ... er, light on the appeal of these kind of parallels. 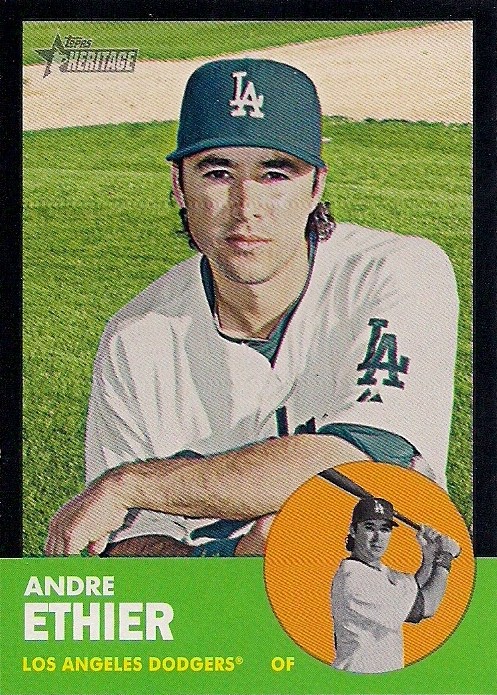 A black-bordered 2012 Heritage Andre Ethier. Or, what I call a night-time border parallel. 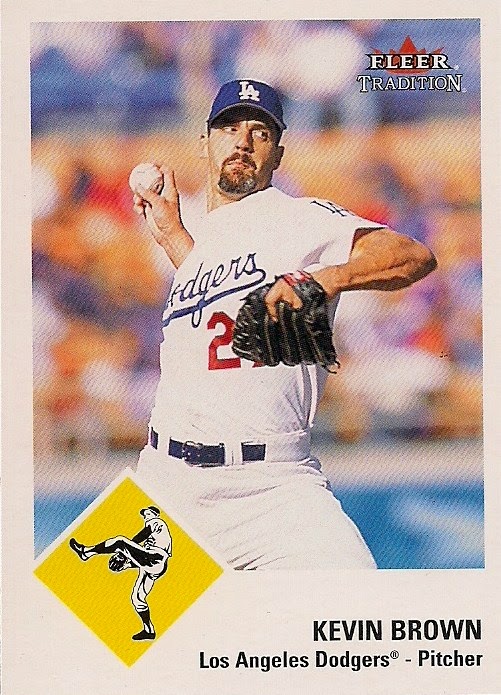 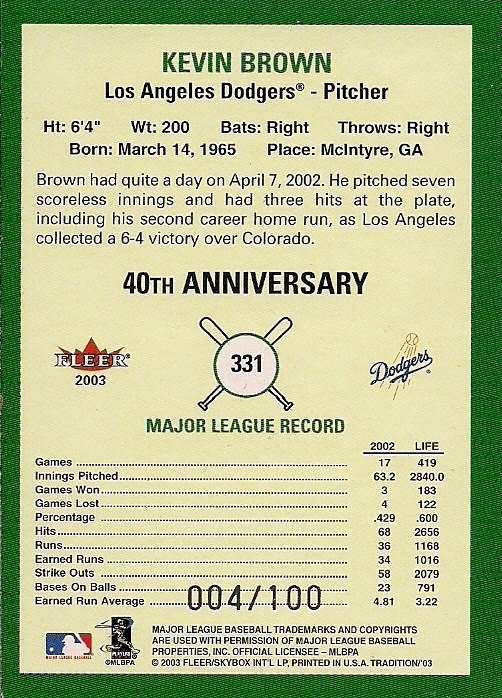 It is a numbered, glossy 2003 Fleer Tradition Kevin Brown card.

I don't know which horror to confront first: the fact that there is a whole new 12-year-old parallel set that I never knew existed before I received this card, or that the only one of these parallels that I own -- and likely will ever own -- is of Kevin Brown. What a daymare. 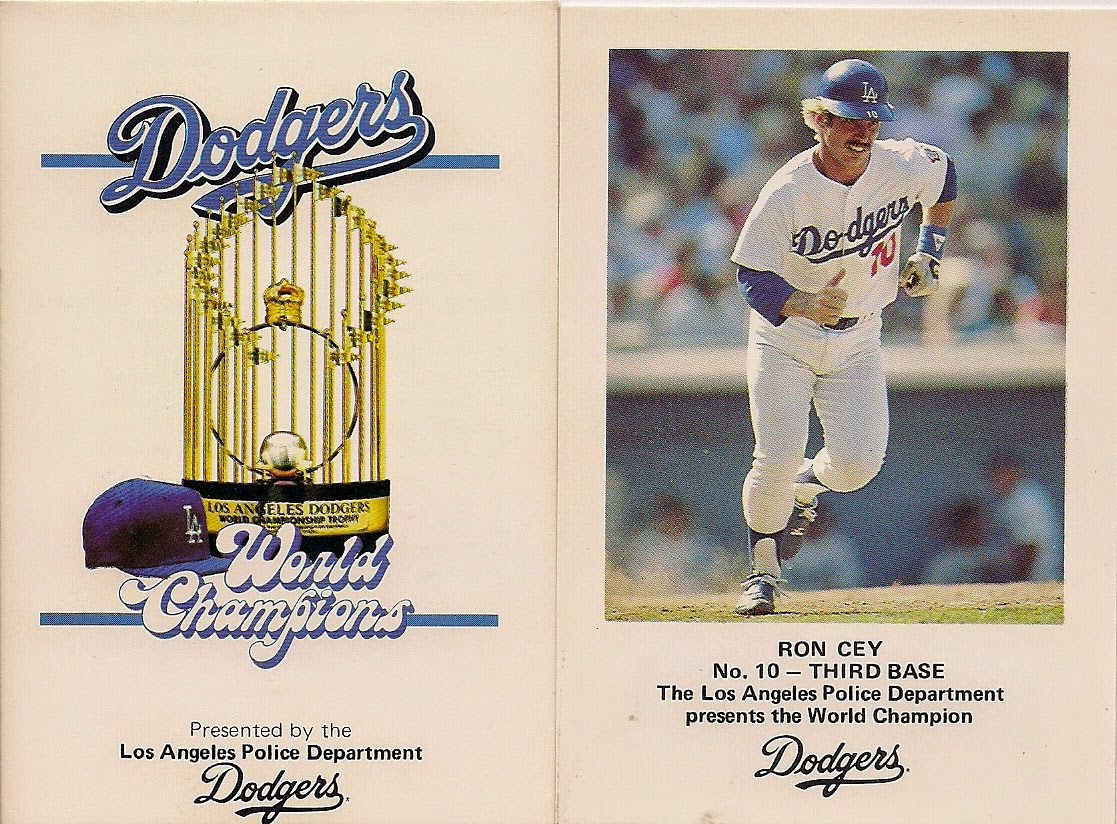 Finally, here are two very key cards from the 1982 Dodgers Police Set, issued, of course, after L.A. won the World Series. I have a number o Police cards from various different sets, but I was completely lacking in anything from 1982.

These cards cause me to wonder when the Dodgers will ever win another Series. In fact these are the things I think about when I lie awake at 8 a.m.


I'm pretty pleased with those six cards. At this stage of my collecting adventure, that's darn good for a blind trade. I hope I can at least do as well when I send some cards back to Tim.

I don't know when exactly I'll be gathering cards, but I do know I will be doing it either in the early afternoon or after the sun goes down -- as is proper.

And I assure you, if I am smelling any cardboard, it will be at night ... when nobody can see me.

Fuji said…
I'm a total morning person and have been ever since I started teaching. Before that... I was a night owl myself. The older I get, the less sleep I require. It's not uncommon for me to stay up past midnight and wake up at 5am. So maybe I'm evolving into a night owl who loves the smell of cardboard in the morning.
April 8, 2015 at 11:09 AM