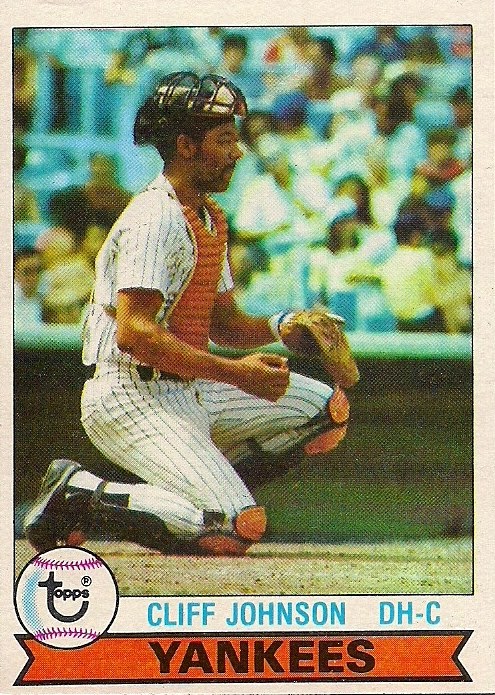 When the 1979 baseball cards hit store shelves, my hatred for the Yankees was as high as it had ever been and perhaps has been since.

The previous season, the Yankees had rallied to surpass my second favorite team and my brother's favorite team, the Red Sox, to make the playoffs, then defeated another favorite, the Royals, for the third straight time to reach the World Series, then beat my favorite team for a second straight time, the Dodgers.

That feeling lasts to this day. But that doesn't mean I can't enjoy Yankees cards.

Growing up in the Northeast, in Yankee territory, there were just parts of my childhood that are stamped with Yankeeness. The instrumental theme song before every game. The 1978 Yankee yearbook acquired when I saw my first MLB game in person. And, of course, the Yankee Burger King cards.

I eventually acquired a single card that year and I wrote about it a few years ago.

But that didn't stop the needing.

So, not long ago, Mark Hoyle found an entire set of 1979 Burger King Yankees and sent it to me.

In an accompanying note he said he never thought he'd be sending me Yankees.

I understand. It's very weird.

But we were deprived kids in the '70s. The only cards available that were not the Topps flagship set from that year, were cards out of a cereal box (Kellogg's), on the bottom of a twinkie (Hostess) or floating out there in some mail order netherworld (TCMA). Not only were Burger King cards new, but they looked just like Topps cards EXCEPT THAT SOME OF THEM DIDN'T.

This was the selling point and the reason for my overwhelming interest.

Looking at the 22-card Burger King set now, I noted that there are just four cards that are different than their 1979 Topps counterparts, but I'll get to that in a second.

First, here is the team card: 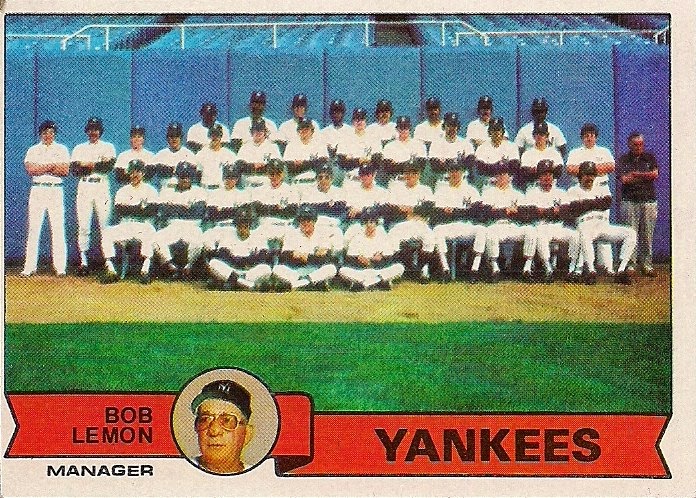 It's the same as the Topps Yankees team card, except the back is different. 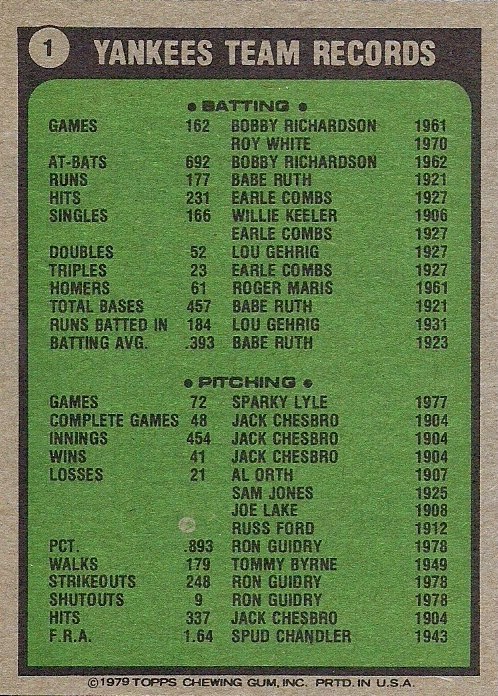 While the Topps back features a checklist, the Burger King back shows historic team leaders. This is what team cards did in the 1960s and early 1970s. I like this a lot. 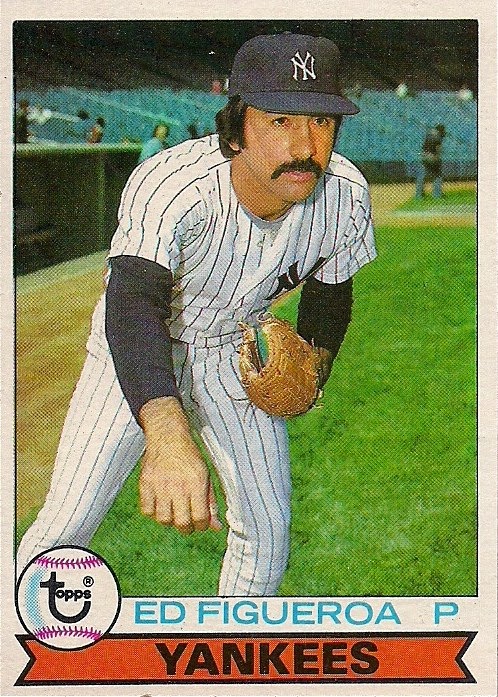 Most of the rest of the cards are identical to what you see in the 1979 Topps set with the exception of the card number on the back (there are some subtle cropping differences with some of the Burger King cards). 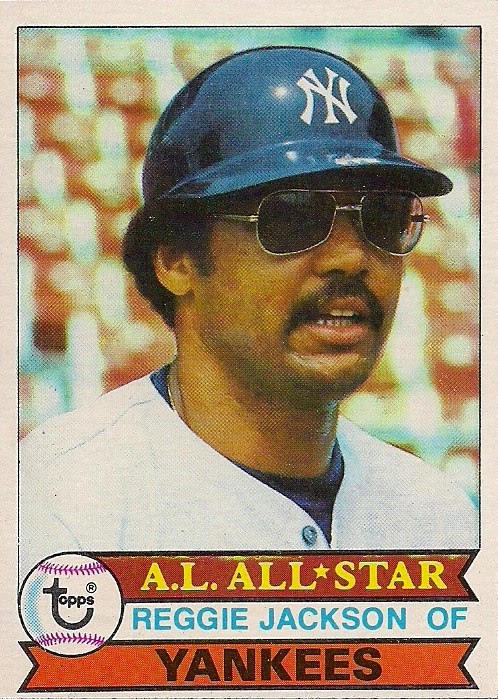 Reggie Jackson even keeps his All-Star logo in the Burger King set.

But where it gets fascinating is where Burger King ventures out on its own. 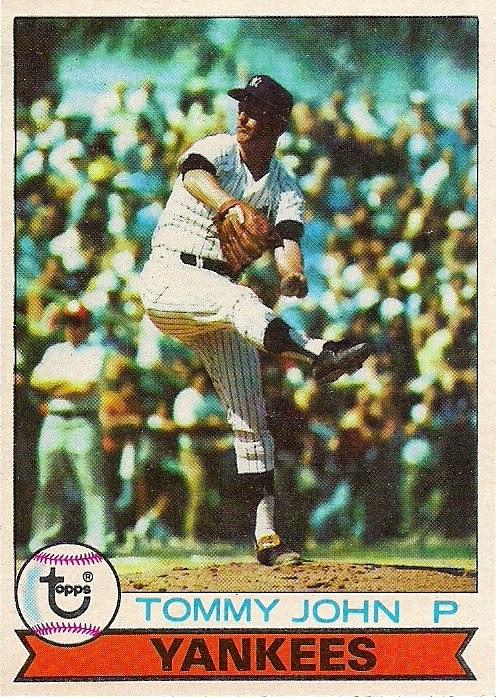 There is the Tommy John card, which I've shown before. 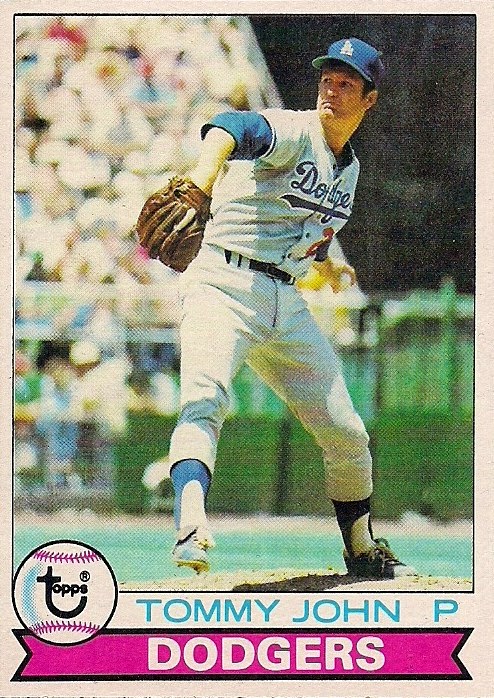 And that's what John looked like in the 1979 Topps set. 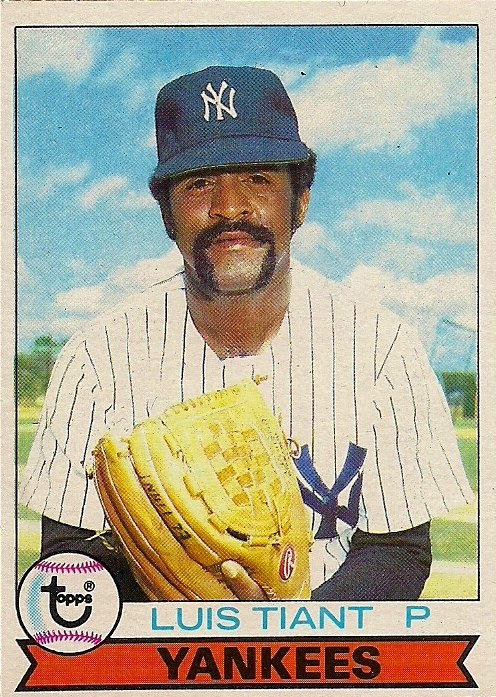 Luis Tiant was a headline-making acquisition by the Yankees in the offseason of 1978 and by the time this card came out, Tiant was probably already rehearsing his lines for Ballpark Franks. 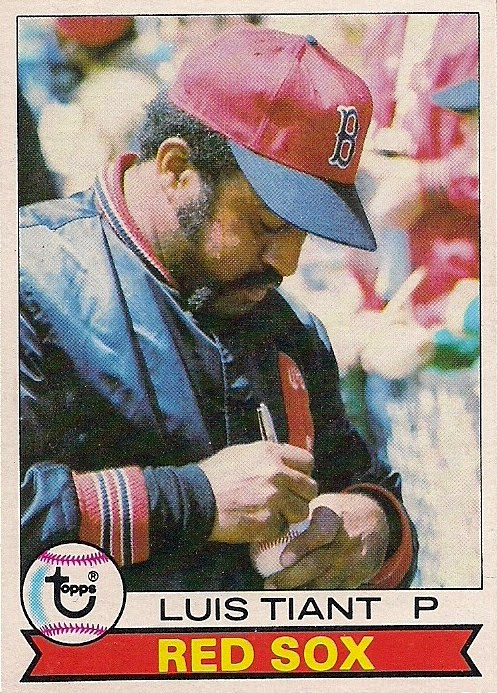 This is so much better.

The other card in the set featuring a player who switched uniforms is Juan Beniquez. 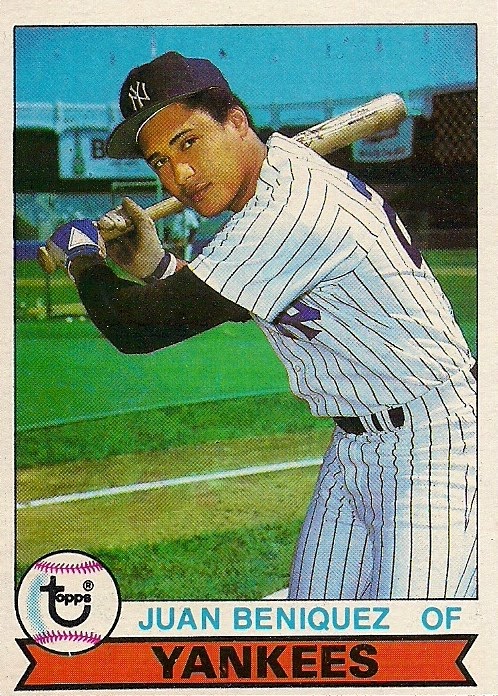 That is Beniquez as a Yankee. 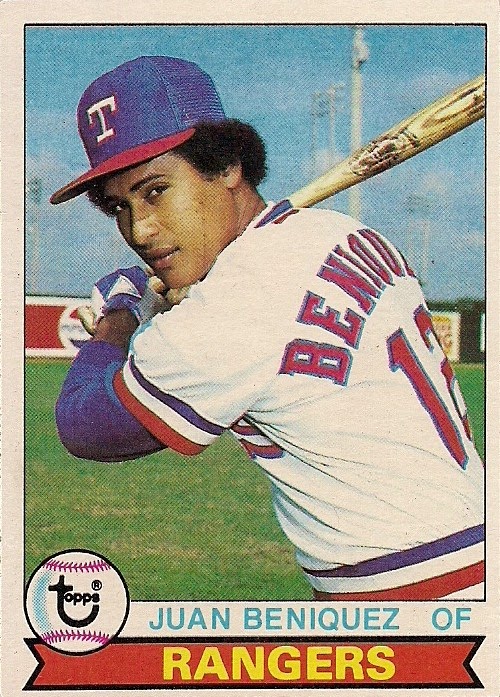 And there he is as a Ranger, with much longer hair and positioned between a Pepsi ad and an ad for -- wouldn't you know it? -- Burger King.

The other card in which the photo is different from the '79 Topps set is one that was a surprise to me. 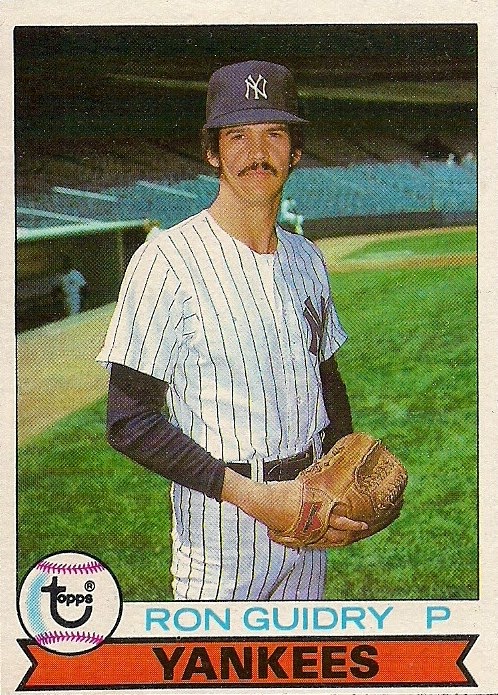 Ron Guidry didn't switch teams. In fact, he was the most celebrated pitcher at the time, winning the Cy Young Award with 25 wins and a 1.74 ERA.

But, for some reason, Burger King's photo is different. 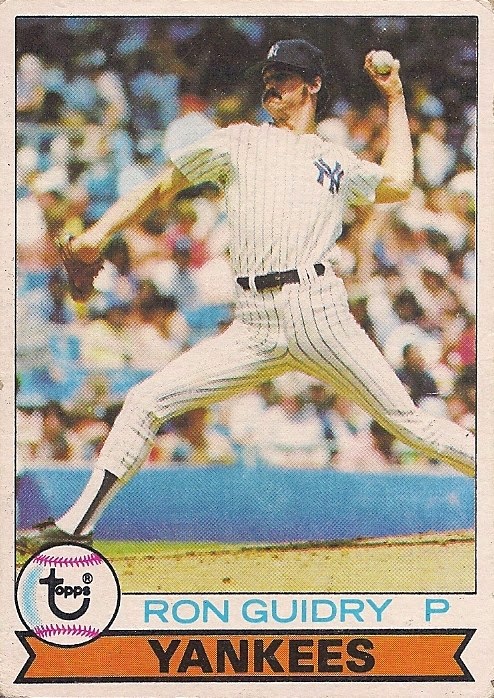 I'm not sure why you'd want to change that.

However, the photo used in the Burger King set is not unfamiliar to the 1979 Topps set. It appears in the record breaker subset. 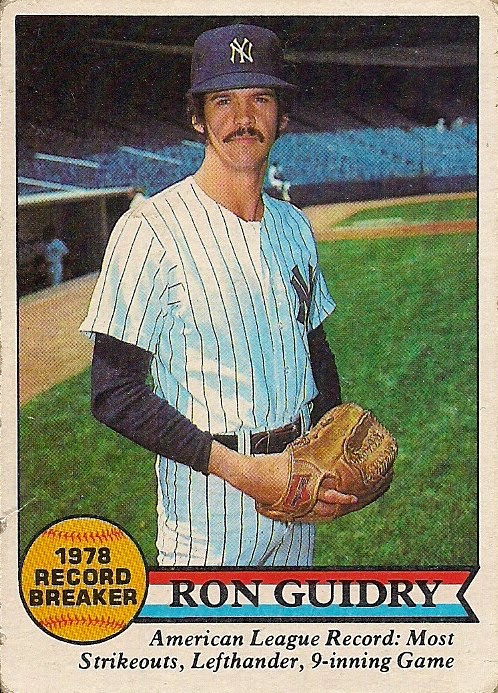 Even though the vast majority of the cards are "repeats", and Yankees at that, I would have cherished this set if I received it in 1979. This was before Traded sets were a thing, so there was no chance of seeing players in their new uniforms that soon. Burger King accomplished what Topps Traded sets wouldn't accomplish -- without airbrushing -- for two more years.

That's how Topps got me to clamor for a Yankee set.

But don't expect it to happen ever again.

carlsonjok said…
Talk about synchronicity. I am sitting here sorting through a large lot of 1979 Topps that I bought at a show over the weekend,. So, I am looking at some of these cards as I am reading about them.
April 27, 2015 at 10:19 PM

AthleticGigantes said…
I associate the Yankees from this era with urban blight that was prevalent in the old and dying urban core of the large post industrial metropolitan areas on the east coast, especially the Bronx. The things one remembers from reading the papers (before delivering them) and of course there was Walter Cronkite on the evening news reporting the dilapidated state of our cities.
Ok, back to baseball cards: those BK cards are great! 1979 was the last year I collected cards as I was of the age when girls took up more and more of my time. I probably bought 8 or 9 packs and managed to pull the Ozzie Smith rookie. However, I didn't like the card design but through your posts I'm beginning to appreciate this set more and more. Someday I may even decide to try to put the set together. I enjoyed the post. It brought back memories of watching the 19u9 WS games with.my dad. Thanks
April 27, 2015 at 11:43 PM

Mark Hoyle said…
Did you and AJ synchronize these posts. I added the Yankees set to my 79 set. I'm going to grab a Phillies BK team set also. Might go back and grab the sets from 78 and 77. Still have one more of the BK Yankees sets ready to send to Nick.
April 28, 2015 at 5:14 AM

Tony L. said…
The Yankee hater in me is telling me not to like these Burger King cards. The oddball lover in me wants them.

Rob's Cards said…
I've thought about getting the 78 BKs just to have it with my 78 set. 1978 is my primal year on baseball cards.And talk about hate, I probably wouldn't be able to post on a Dodger fans blog until only recently. Although I still can't watch the play, I now accept that, yes, Kirk Gibson hit that homer off of Eckersley, and there's nothing I can do about it. ;-P
April 28, 2015 at 9:38 AM