April 16, 2015
The Kmart in my area seems to be dangling by a perpetual thread. This is nothing different from most other communities' Kmarts, that is if they still have one. I've been to enough of them to know that I'm one of the fortunate ones in that my Kmart is relatively clean, well-stocked and there are no drug deals going down in the parking lot.

I had long given up on Kmart for being a source for cards. It was never very good in that area, but during the early years of this blog, I was able to find mega-discounted blasters of Upper Deck Spectrum and the like. However, during the last several years, the "card area" shrank until it was maybe a couple of racks, next to the service desk, where you had to shop for cards right next to a couple of female employees gabbing about whatever. I've never felt more like a nerd in my adult life.

My retail card choices have been Target and Walmart, and I go to them equally because the card availability is a little different at each one, but still plentiful.

Except that I noticed that Walmart's card choices had grown progressively smaller over the last six months and have reached the point where it's not worth going there anymore.

Meanwhile, Kmart appears to have taken over for Walmart.

When I received a rack pack of 2015 Heritage for Easter from my wife, I asked where she got it and was stunned when she said "Kmart".

She went on to say that there was a whole section of baseball cards from different years.

This I had to see.

So, I did yesterday. She was right. At the front of the store, but quite a ways from the registers, was a wide section devoted to trading cards. There were blasters and rack packs and sticker books and even supplies.

The cards weren't from only this year, too. There were racks of 2014 and 2013 and 2012 Topps, as well as the usual discounted Upper Deck packs. And there were football and hockey cards, too.

This was more than I had ever seen at Kmart.

But I didn't have much money to spend on cards after the recent card show. I was intrigued by a 36-card rack pack of 2013 Topps that was marked down to 3 bucks, so I went with that. 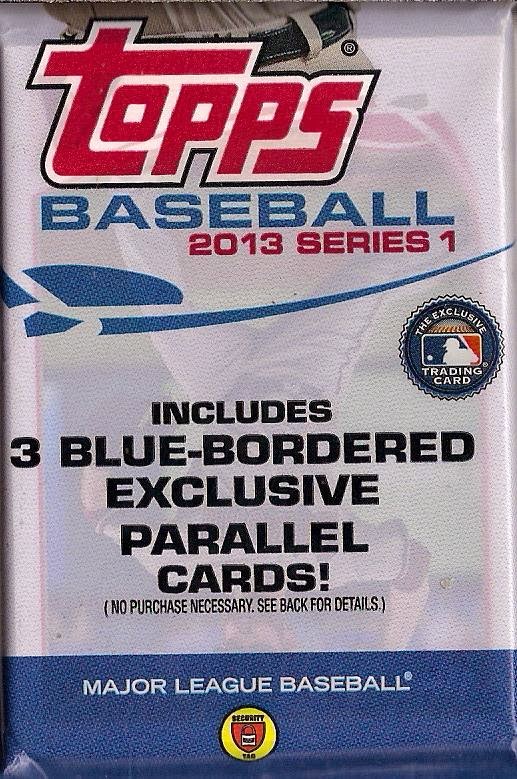 Note what it says on the pack. "Includes 3 blue-bordered exclusive parallel cards!"

These are packs obviously meant for Walmart. So, that's where all of Walmart's cards went!

Either someone from Kmart went to Walmart and stole all of their cards, or Kmart is now acting as a discount outlet for Walmart.

This makes me want to look at the other packs and see if there is stuff earmarked for Target in there, too. Whatever the case -- and I know nothing about retail doings at all anymore -- it is very weird to me.

Those are the "Kmart exclusive" blue parallels that I received in the pack. (Yay, a Dodger! But I have it already).

I fully intend to revisit Kmart to get a better idea of what is going on there.

It's good to have a reason to go to Kmart again.

Meanwhile, there might be some best news of all out of this whole thing:

I may never need to go to Walmart again.

Cardboard Jones said…
Hopefully, the two women weren't HOT, making you feel like an even bigger need. Of course, I don't ever recall a hot chick working at KMart
April 16, 2015 at 8:24 PM

capewood said…
The nearest Kmart to me is just a relaxing 5 hour drive away. I stopped in Toys R Us which used to have a decent card section but no longer. The only 2015 was Topps Opening Day with special Toys R Us cards. Turned out to be purple bordered foil cards
April 16, 2015 at 11:46 PM

BobWalkthePlank said…
Kmart was the place to buy cards in my town for the longest time. They actually had a dedicated aisle! Always quick to markdown blasters to make way for new ones. Unfortunately ours closed down a few years back. The competition from two Walmarts, two Krogers and a Target was too much.
April 17, 2015 at 7:56 AM

Brian said…
The Kmart in Minneapolis is one of the more depressing department stores I've ever been in... The Twin Cities are Target Headquarters, and while Walmart is not in Minneapolis, there are several all around the city limits. Kmart just can't really compete with that. The only reason to go near it is to get food from one of the two Taco Trucks that hang out in the parking lot.
May your Kmart thrive and bring you many cardboard treasures!
April 17, 2015 at 8:45 AM

Fuji said…
I haven't seen a Kmart in my area for years. Back when I was a kid, I hated going there. I was always worried I'd see someone from my school. Not sure if this was just a local thing... but my classmates would always tease people who shopped there. These days the only time I think about Kmart is when I see singles from that overproduced 1982 box set. I'm convinced they printed more of that stuff then actual 1982 Topps.
April 19, 2015 at 2:17 PM