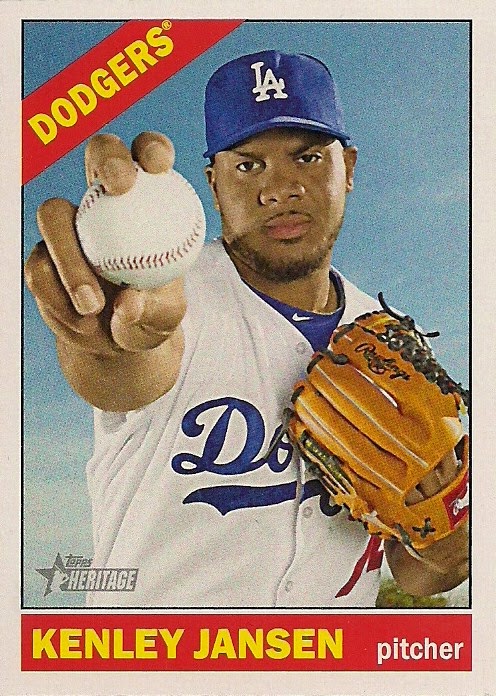 We've got a lot to cover today, so bring your bottled water, some comfortable socks and focus on what I have to say because I'm not saying it twice.

I received some cards from my wife for Easter. Yes, Easter. How many times to do I have to tell you that I'm way behind? It was a rack pack of Heritage, which is very odd to see Heritage in rack pack form. She did very well with the pack selection, because out emerged two of the very latest Dodgers: 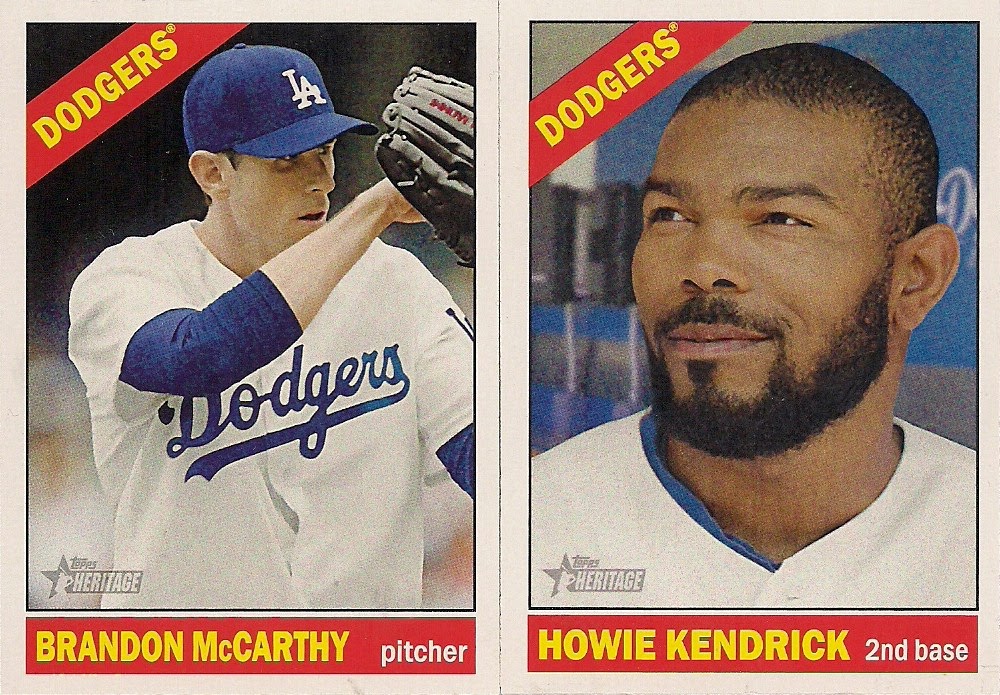 Nobody's fooling me that those are actual Dodgers uniforms that they're wearing, but I won't complain because this is an antiquated hobby and the alternative is collecting virtual cards online, which I hate to break the spell here, is preventing you from obtaining real cards. Think about it. Gotta stay focused in this hobby.

The rest of the Heritage cards were your usual, although one little bit of something stood out: 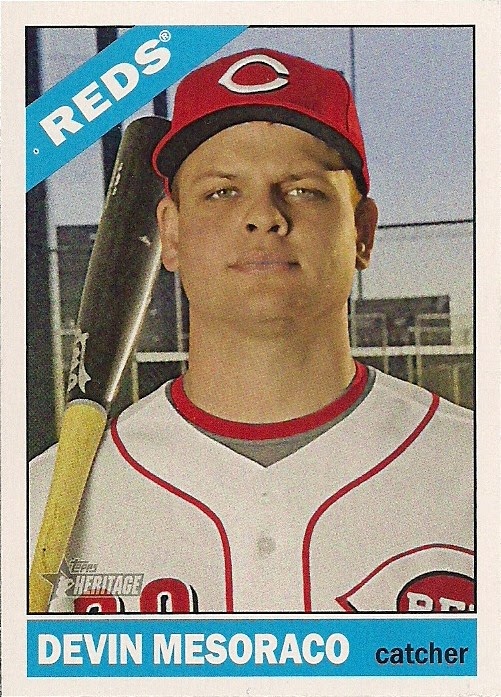 Yikes. No, no, not Mesoraco himself. The sight of him made me want to turn the card over as quickly as possible ... TURN IT OVER! TURN IT OVER!!! 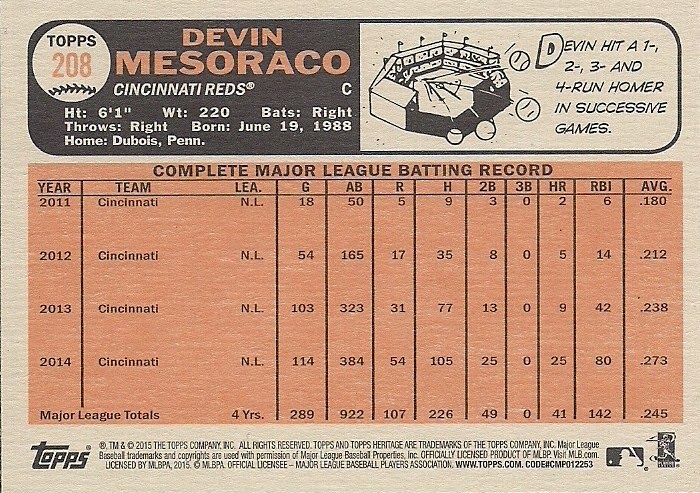 This is what I saw. That's an incredible amount spacing between years there. Somebody neglected to write some text above the stats, or forgot to place it on there.

But, I'm willing to give Heritage the benefit of the doubt. You know how they're always paying tribute to the previous set down to the very last line. 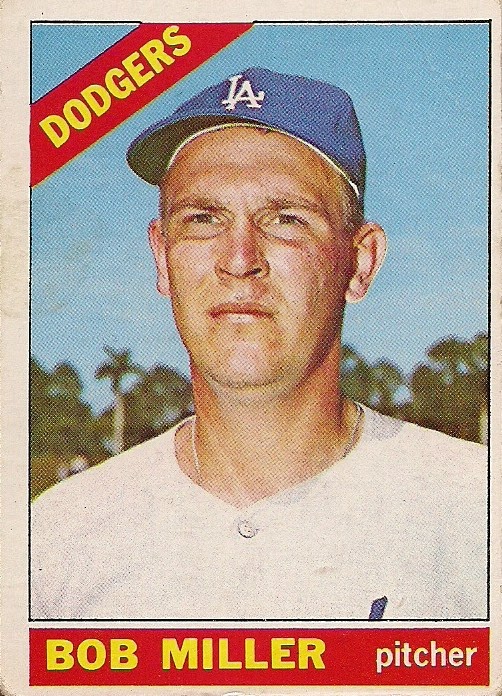 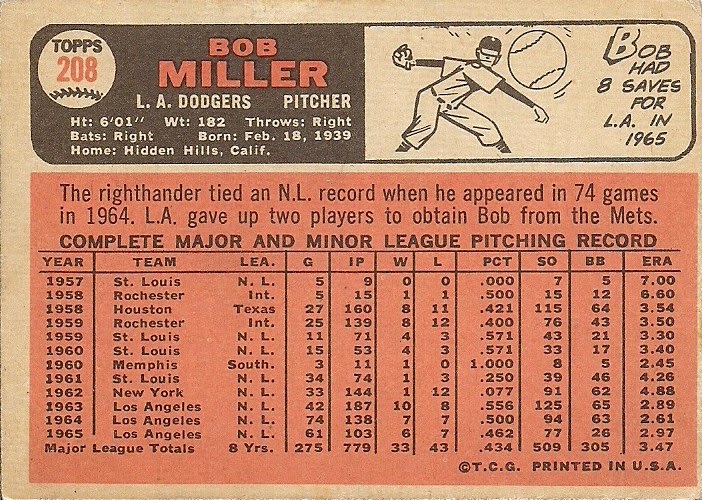 Nope. No exotic spacing there. Guess it's just a screw-up.

Another departure from Heritage I noticed when I did the team card post the other day.

This is what team cards featured on the back of Heritage in 1966: 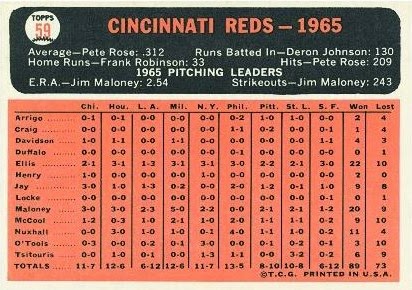 Yeah, yeah, pitching wins are antiquated and all that. But it's some interesting little trivia there.

This is what are on the back of team cards in 2015 Heritage: Weee. A checklist. Not only is it boring, but not in keeping with '66 Topps. 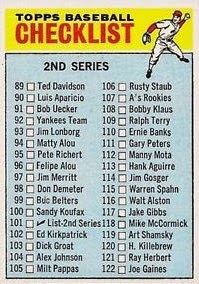 Something like this would be more appropriate, but I guess this turns off too many collectors now. 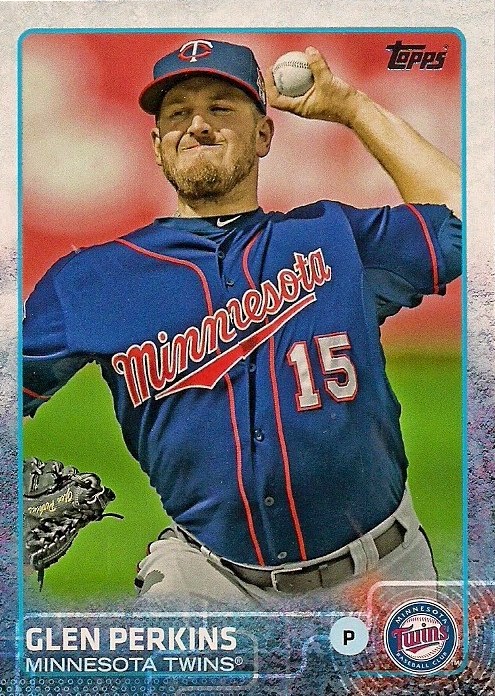 Moving on to another obsessive examination of 2015 Topps cards.

I asked for feedback on naming the 2015 Topps base set. As I suspected "something else" received the most votes. But I'm not opening up the floor quite yet.

I'm putting up another poll because after the comments on the previous post, I realized that I had neglected some options that I really liked.

So this latest poll will include: 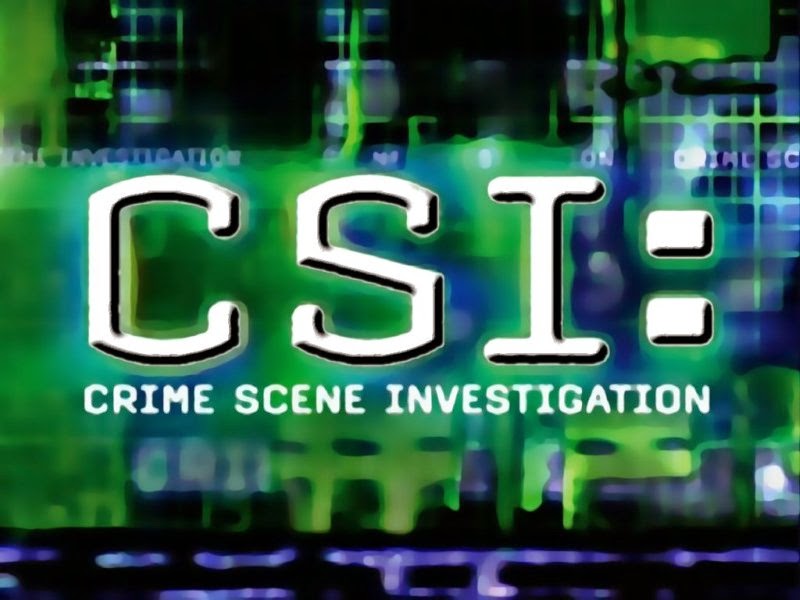 I hope "something else" doesn't win after these three options go on the board. I like all three and can see any of them as the Define the Design option for 2015 Topps. If "something else" wins, I'll probably just name it the Epicenter Set and be done with it, so this is your last chance here.

I'm still working on the 2014 Allen and Ginter set and I still have a few more cards left from the great "Goodbye to March" festival.

One of those cards is the the 2014 Allen and Ginter Babe of the Year: 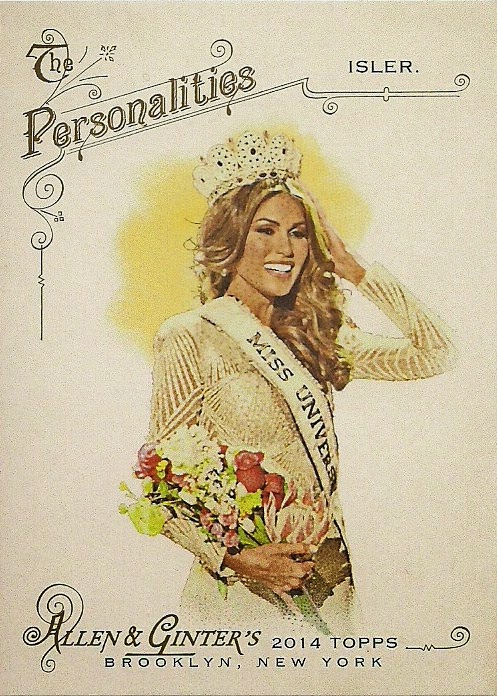 I realize Felicia Day is in this set and some guys have a thing for redheads on nerdy fantasy shows. I have a thing for those girls, too, but this is MISS UNIVERSE, class. They named the universe after her because of her beauty.

Plus, I did my research.

Congrats to Gabriela Isler, the 2014 A&G Babe of the Year. I guess you already have your crown.

All of the winners: 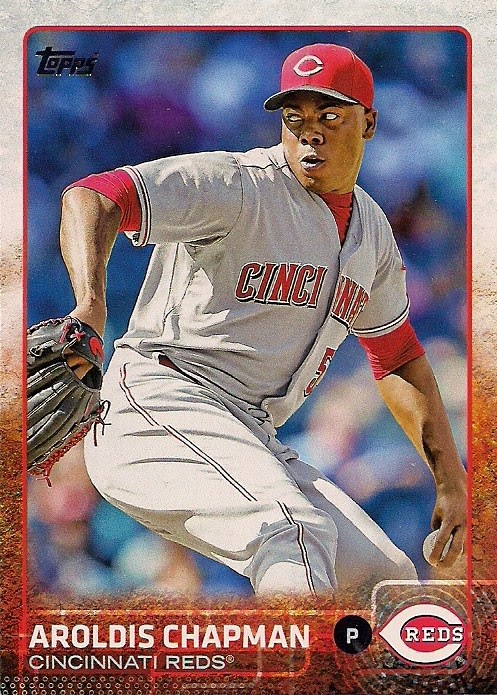 Finally -- and this is most important "shun" of all -- I have completed the 2015 Topps Series 1 set. Aroldis Chapman here was the final card I needed.

That was only for a split second because Chapman was the last card in a series of needs that I received from new Night Owl Cards reader David. He sent this packet of six plus Chapman: 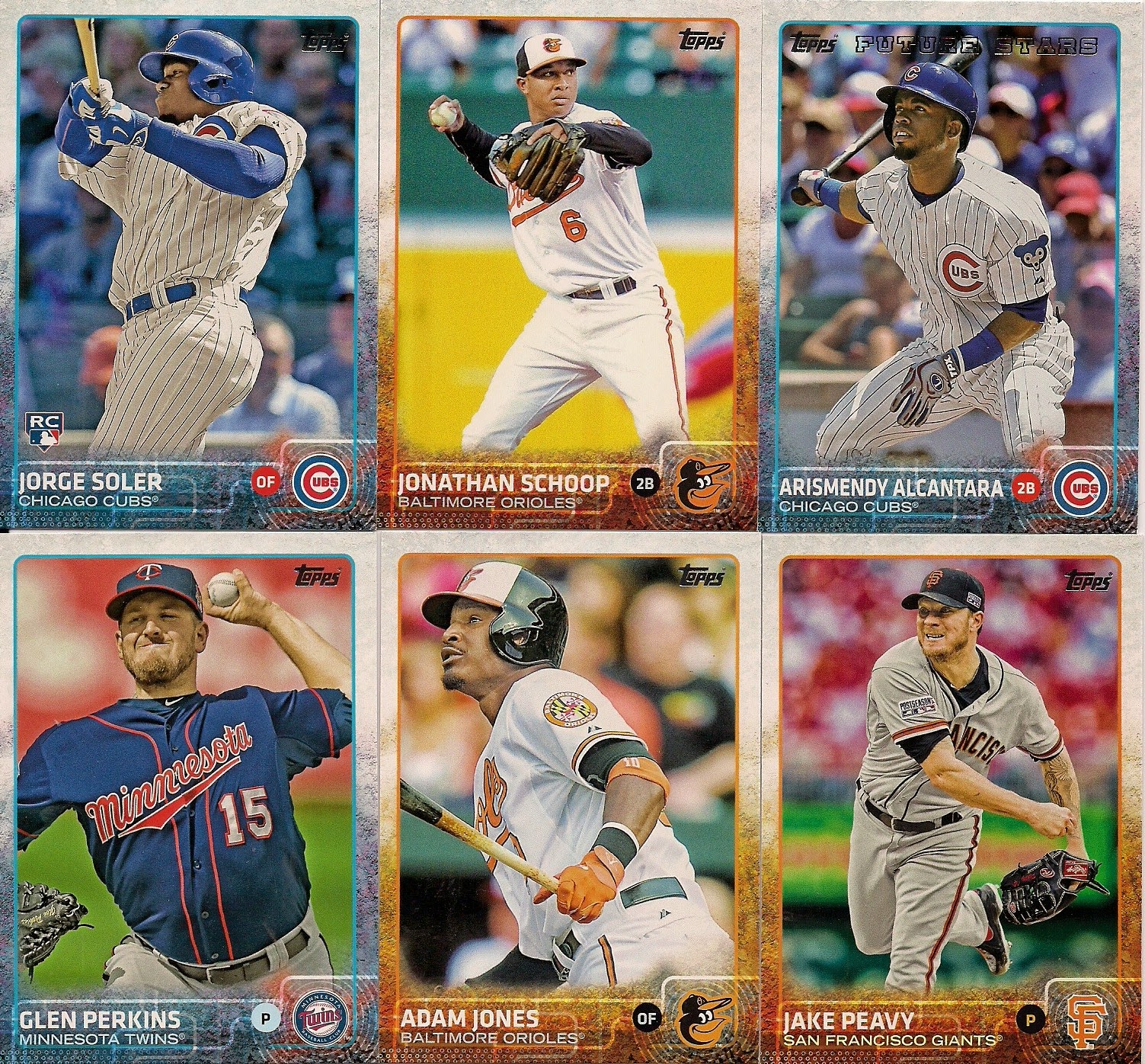 Combined with three cards that I received from Steve of The Card Chop, that does it for Series 1 for me. 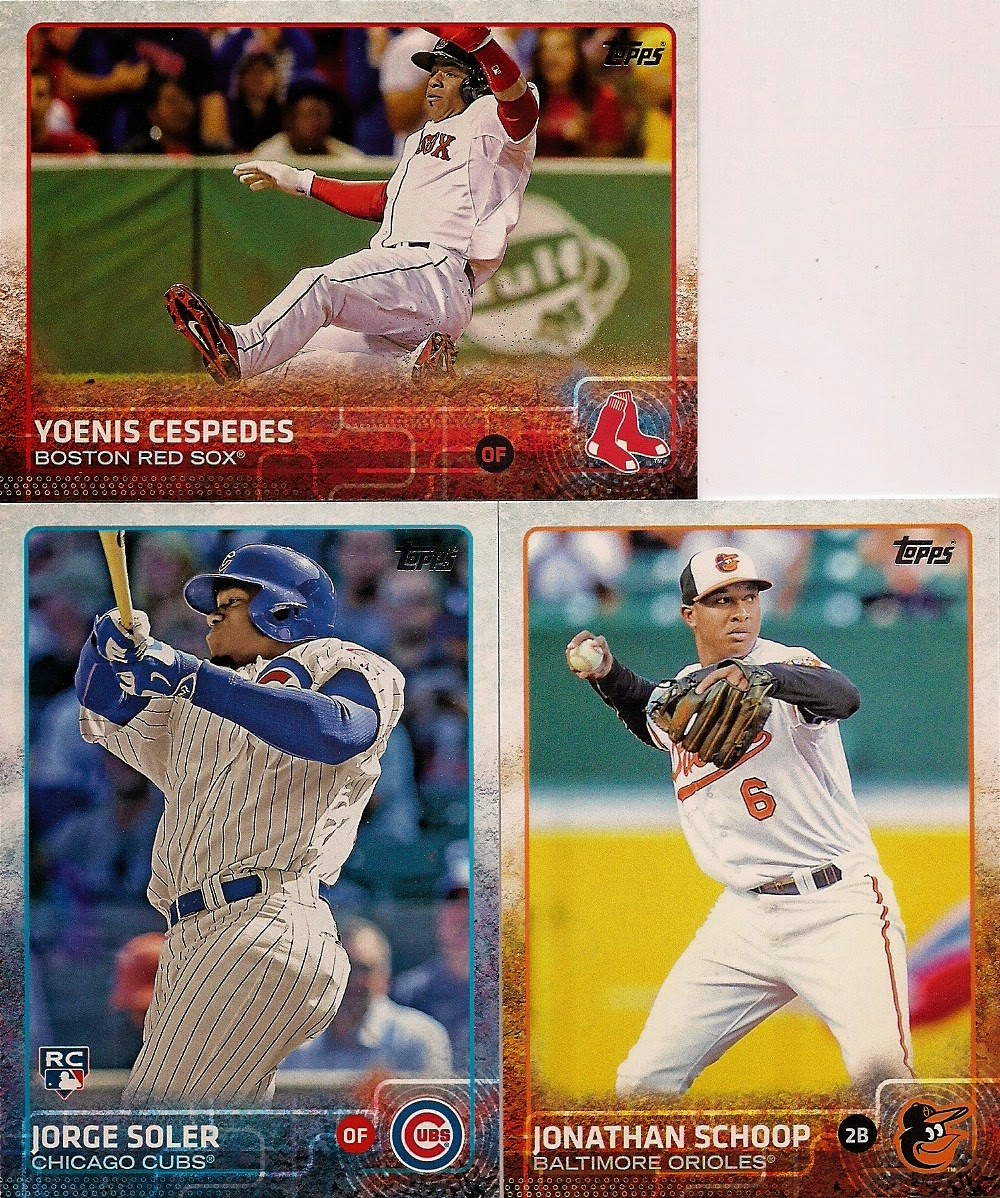 Thanks to everyone who helped out. And now I will wait patiently for Series 2 to arrive. I know Topps expects me to try to collect Gypsy Queen or Bowman or some nonsense, but I can wait until June just fine.

Both Dave and Steve sent me some other cards to help in that cause. I'll show you the cards from Steve first because he had to be a smart-ass. 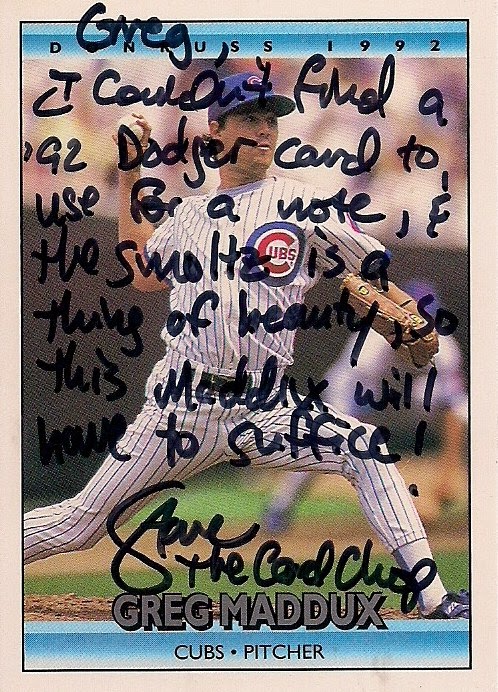 You don't write on 1992 Donruss to destroy it -- you rip it into tiny little pieces or run it over repeatedly with the car! Geez, do I have to go back in time to 1992 and do it myself?

He also sent the '92 Ultra Smoltz card he referenced in the note in yet another attempt to sway me over to the glory that supposedly is '92 Ultra. 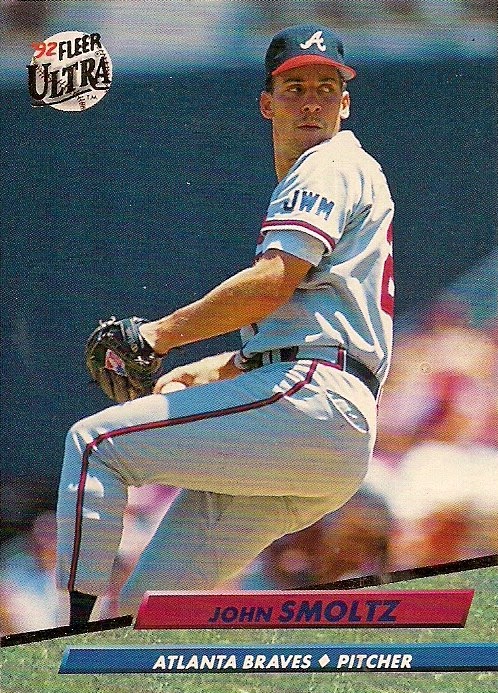 Looks like every other '92 Ultra card, sir. Give me 10 minutes and put your thumb over the top corner and I'll have it confused with another set instantly.

But thank goodness there were some actual Dodgers in the package: 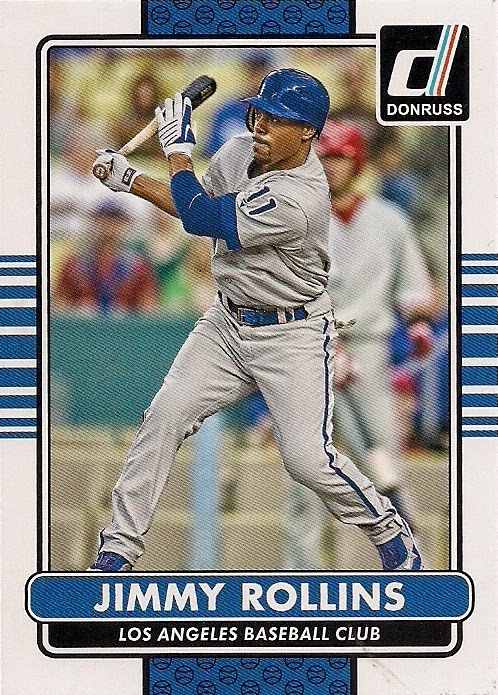 I said, thank goodness there were some actual Dodgers in the package: 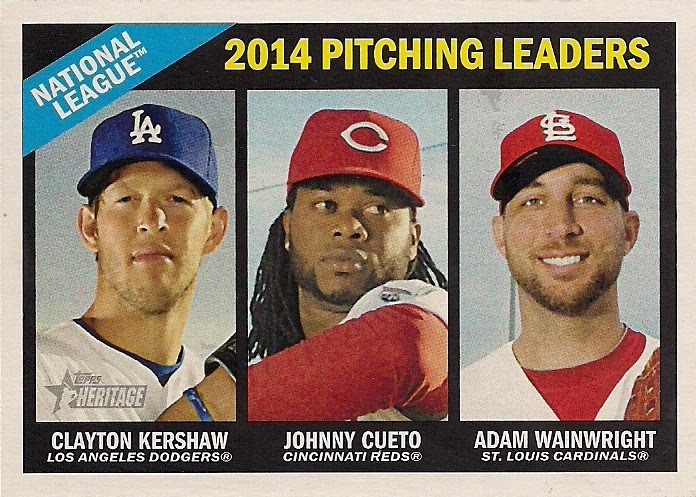 For crying out loud!

Well, he did send me the Kenley Jansen card at the top of the post. Get better soon, Kenley! 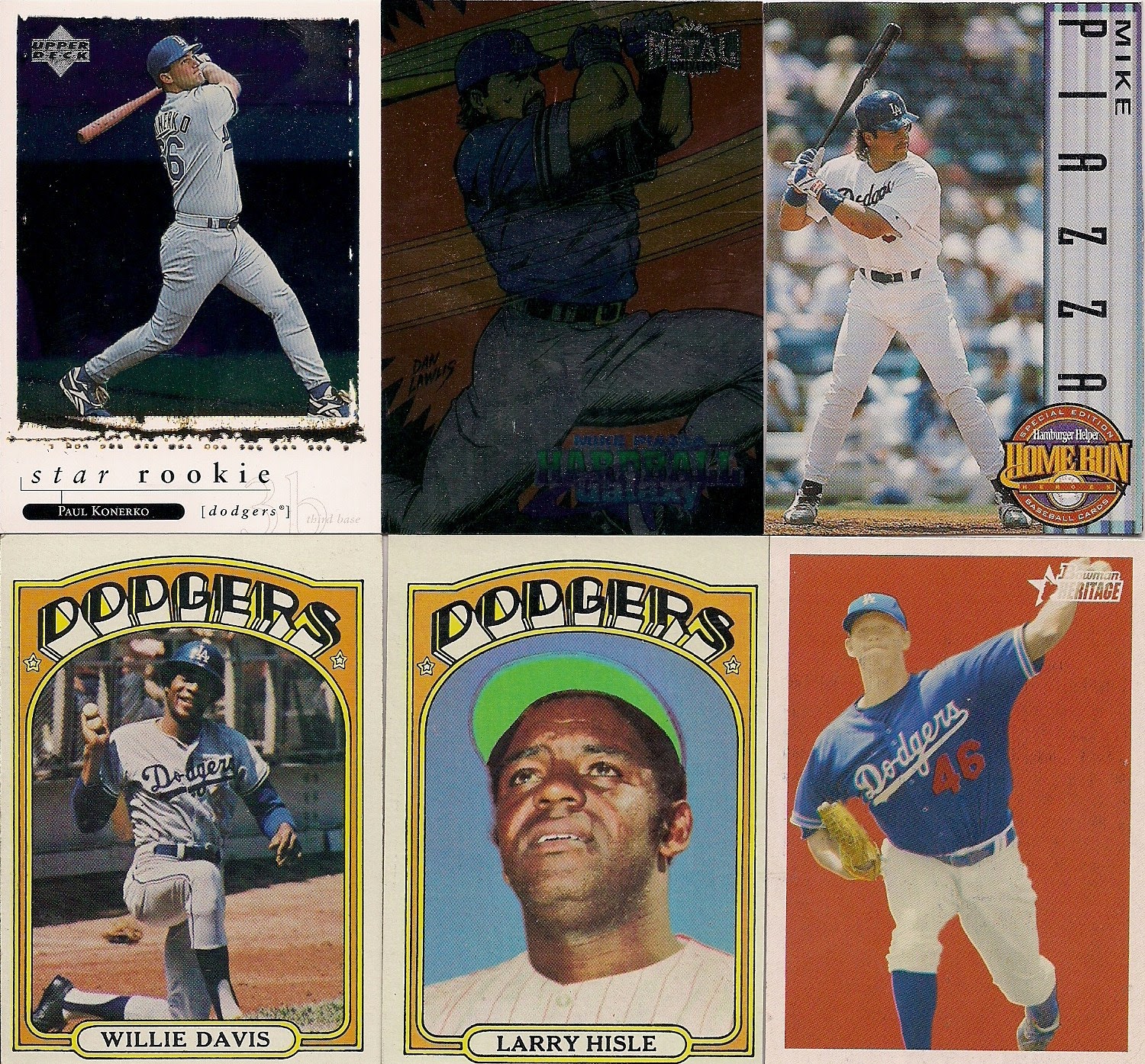 Dave did a little better in the Dodger area, sending these beauties ... 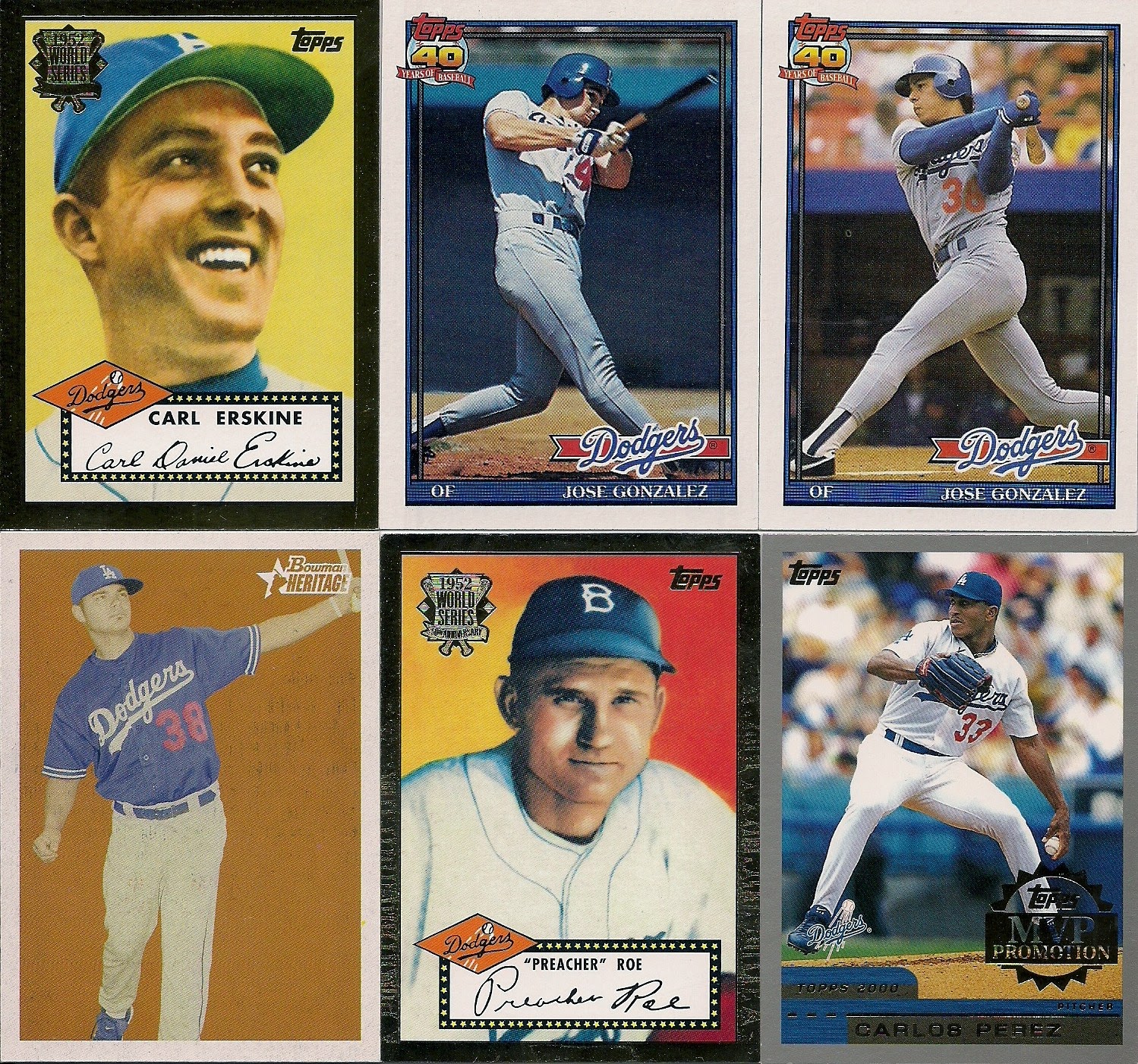 Who doesn't appreciate the two different Jose Gonzalez '91 cards? And the MVP baseball Carlos Perez promo card is something I never knew existed. I'm only 15 years late in entering. 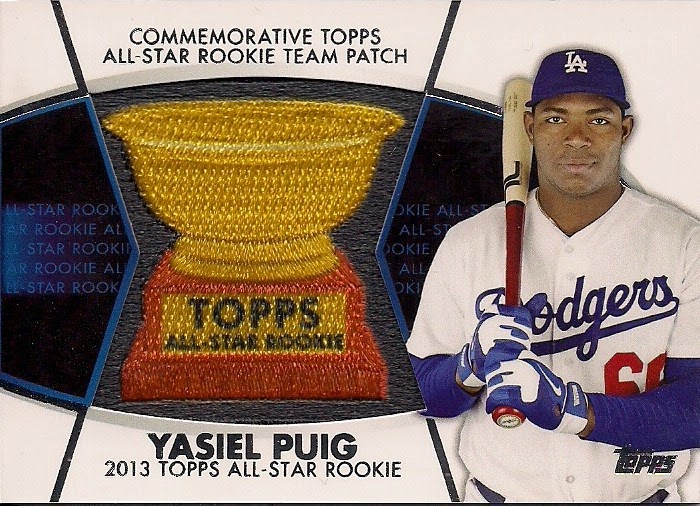 Haven't you always wanted a card with a stitched Topps Rookie Cup?

Never thought about it?

That's Topps, bringing you items you never thought of but now can't live without. Or something like that.

All right, that's everything I've got for today.

Please pick up your trash and exit in an orderly fashion. (And vote in the poll, if you like).

Brian said…
Re naming of Topps:
I'm kinda partial to Blood Spatter Set made famous by our favourite serial killer, Dexter Morgan or perhaps, Buckshot Set in honour of Duck Dynasty!
April 12, 2015 at 7:57 AM

Metallattorney said…
Those MVP parallel promotion cards are very hard to find. I have still never seen any of the Red Sox or Sandy Alomars.
April 12, 2015 at 10:14 AM

Anonymous said…
In defense of Heritage, between expansion and interleague, there' s no way you could fit a team's pitching breakdown on to the back of the card. That being said, perhaps Topps should've just ditched those cards altogether.
April 12, 2015 at 2:31 PM