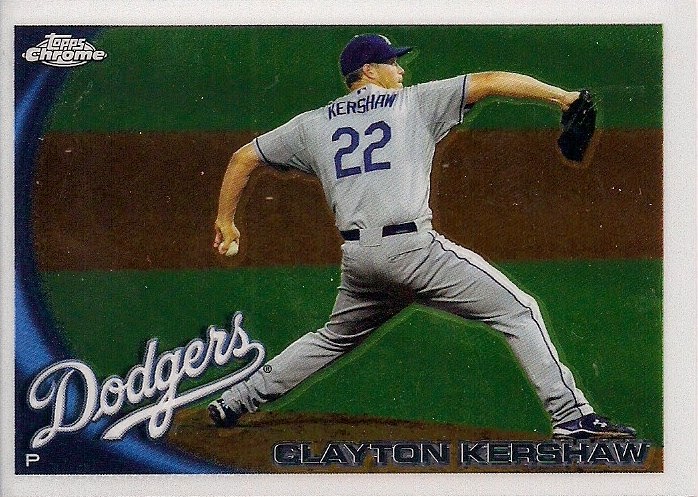 I don't plan to do an update of my Wallet Card every week, as I know I won't have the time to document that frequently, or want to do it every week. I'm sure people don't want to read it every week.

But this was the first week for Wallet Card and everything's exciting and new, so let's take a look at the first week of 2010 Topps Chrome Clayton Kershaw's erosion.

I must say this was a wild week for Wallet Card. The weather was freakish. Twenty inches of snow on Tuesday night. Temperatures at minus 25 on Wednesday night. More snow on Thursday, Friday and Saturday. Wallet Card learned that just because there's snow or you can't see when you're driving, it's not an excuse to stay inside around here. We're strong and hearty people in exotic northern New York, and Wallet Card is going to have be the same way.

On the first day of Chrome Kershaw's stay in my wallet, I took him on my regular walk. I try to go for a walk at least 4 or 5 days a week. January makes it tough, but there was even a day last week when I plowed through everyone's unshoveled sidewalks to get in my 40 minutes.

But on this day the walks were clear and the temperature in the 30s. When we were through with our walk. I stopped and posed Wallet Card next to a dead Christmas tree, which seemed to be the theme of our walk since they were everywhere. 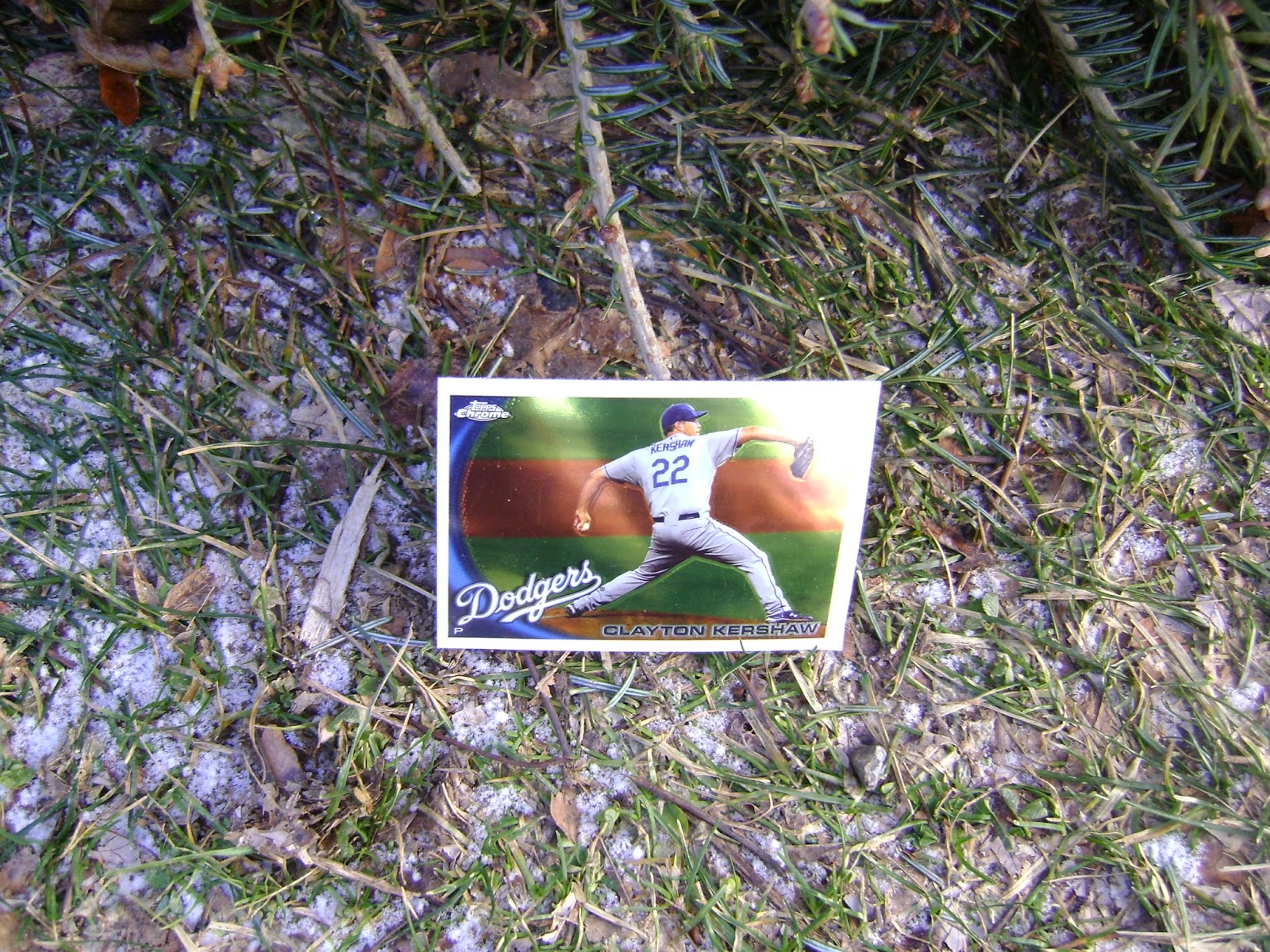 There he is among the needles, still boasting his shiny self. It's a shame Wallet Card didn't get to experience Christmas, but hopefully he'll still be around next December for the festivities.

I was a little concerned that my choice of a chrome card would fail to achieve my desired mission with this project, which is to show the wear and tear through an entire year. Chrome cards are laminated, or chromiumated, or whatever the hell they do to them, and it occurred to me that a lot of other cards in my wallet are also laminated to keep them protected.

That's why I was relieved when I pulled out my Wallet Card after a mere 36 hours and saw this: 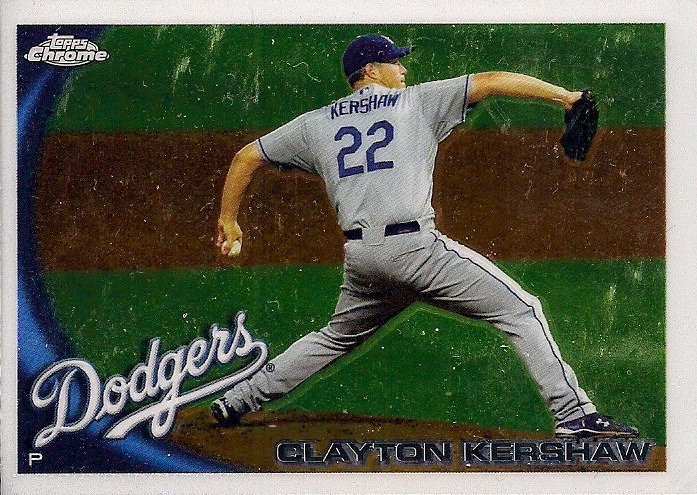 What a relief. I'd never been so excited to see scuffing on a card.

At that point, the snow arrived and Wallet Card and I were so thrilled that we just had to go outside and play in it.

After the first wind-whipped snowfall, Wallet Card climbed onto the top of my car, which was bearing a full 20 inches. 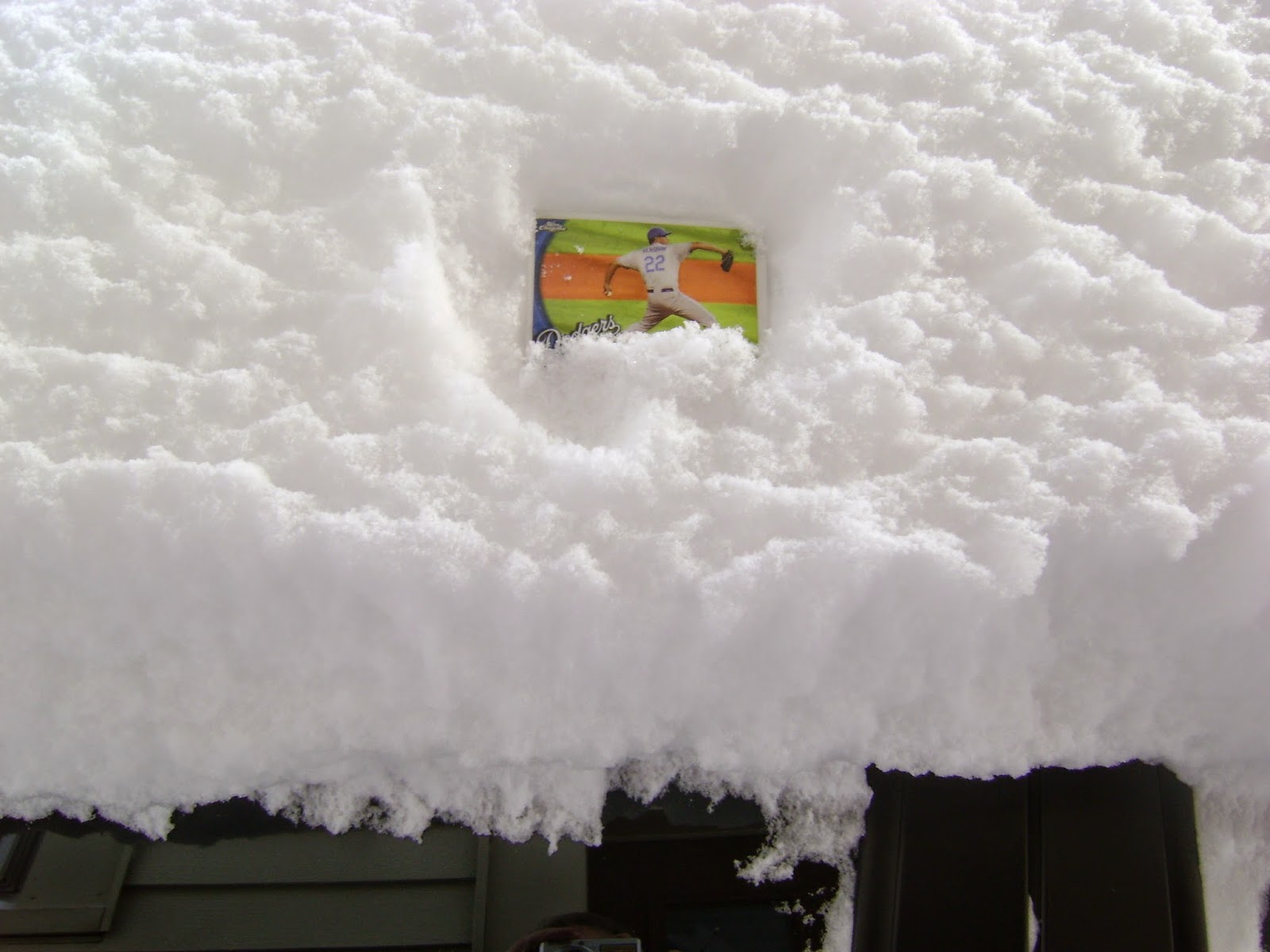 There he is frolicking. Ain't it pretty? 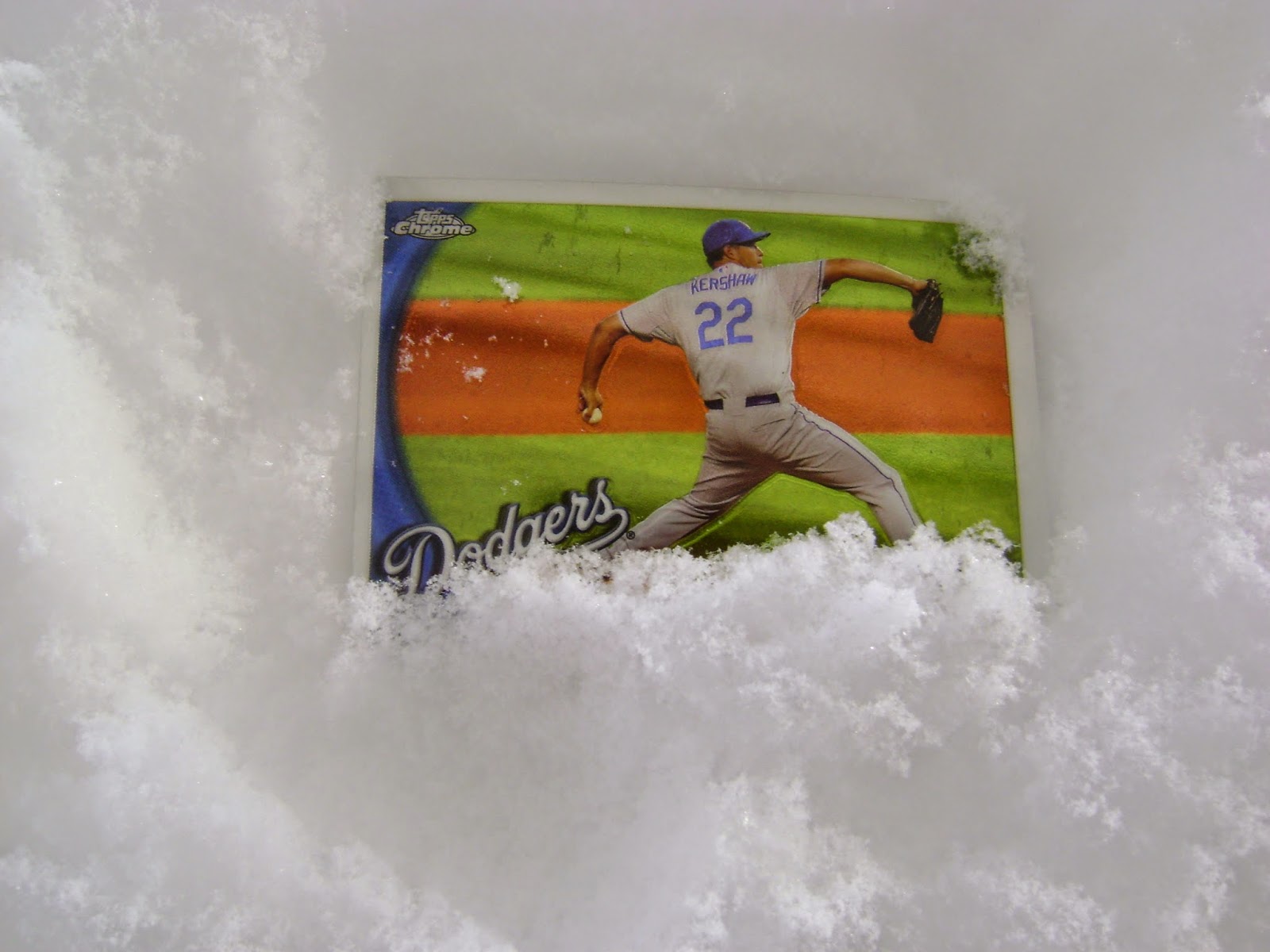 There's a closer look. Kershaw could still mow you down in the dead of winter.

I kept Wallet Card inside the next day. Let's face it, at temperatures plunging into the double digits below zero, none of us were going outside.

On Friday, it snowed again. Another foot. No big deal. All the high school sports around here were called off. Yay! We actually made deadline at work on a Friday night in the winter. Unheard of.

Before work, I went on that unshoveled walk with Wallet Card. It was a tough climb. I could hear him breathing heavily in my back pocket. It was rather unsettling.

At the end of the walk I put Wallet Card down on the sidewalk to measure the snow. 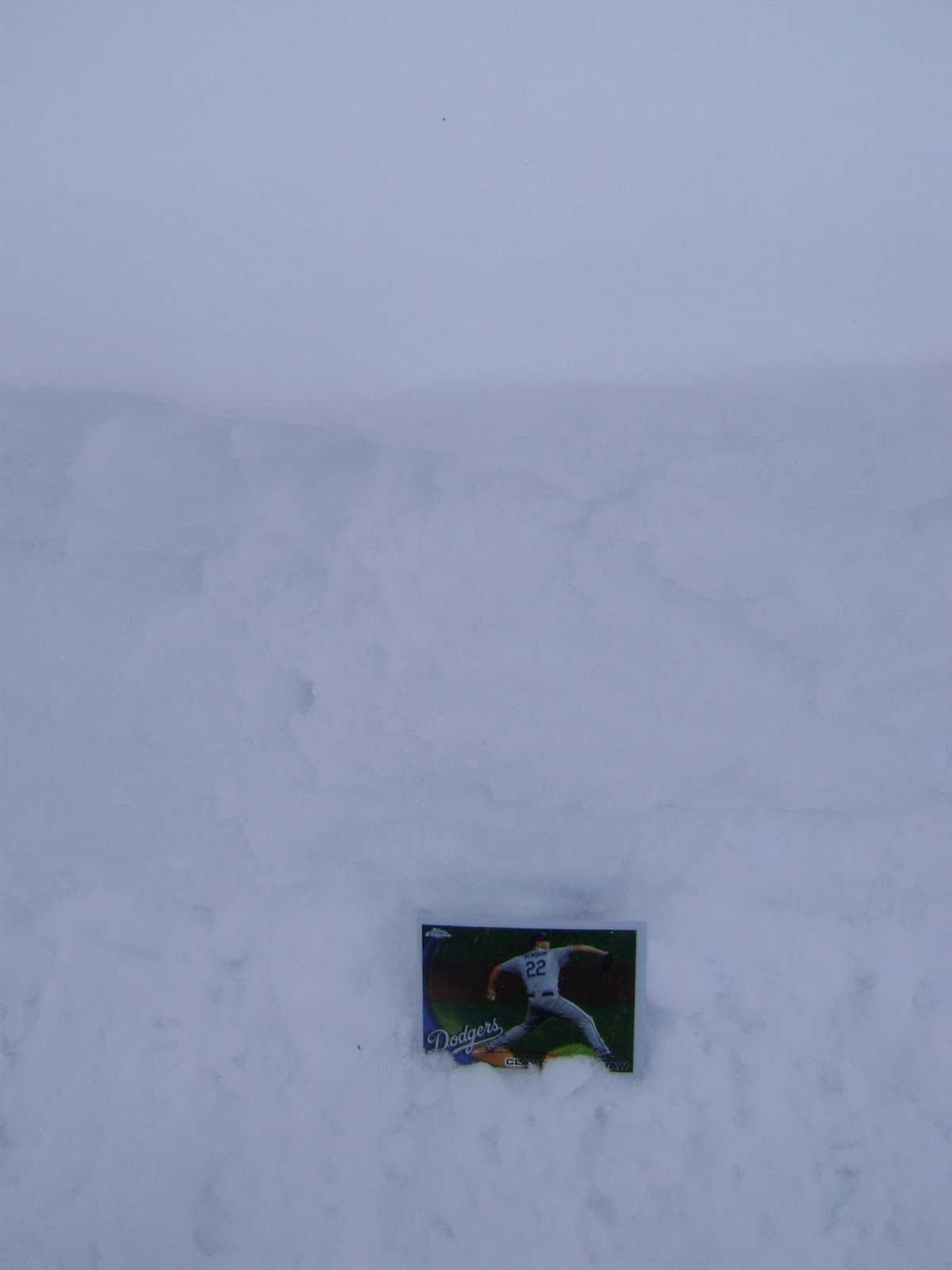 It's a little difficult to see, but the ridge above Wallet Card is the top ridge made by the snowblower. Above that is another mound of snow extending 7-8 inches. There was probably about two feet on the ground at that time. It was a lot, but nothing compared to the 4-5 feet to the south and east of us.

It snowed again on Saturday and we were back out in it. I went on the porch to grab a package and check the shoveling situation and Wallet Card jumped out. He almost drowned in all the snow on the porch.

I rescued him, but somehow he ended up back in a snowdrift ... on the roof. 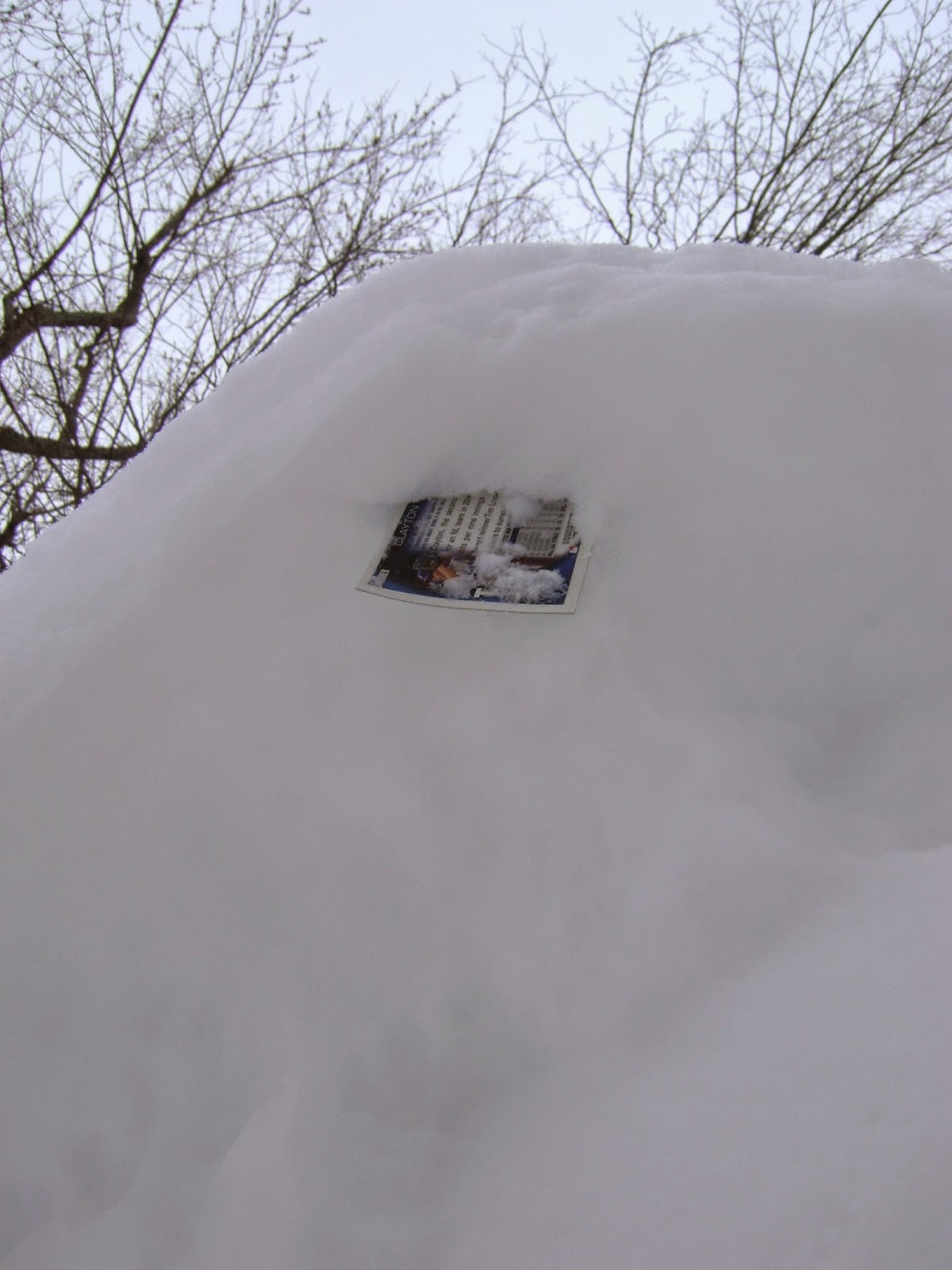 After that bit of nonsense, I decided I should probably reign in Wallet Card a little. So he stayed indoors in his wallet home on Sunday. He needed the recuperation time. It was a pretty action-packed first week.

And now it's time to see what wallet card looks like now: 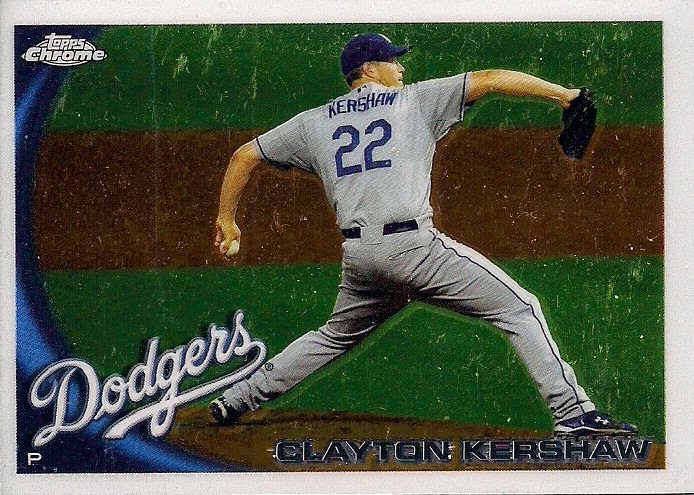 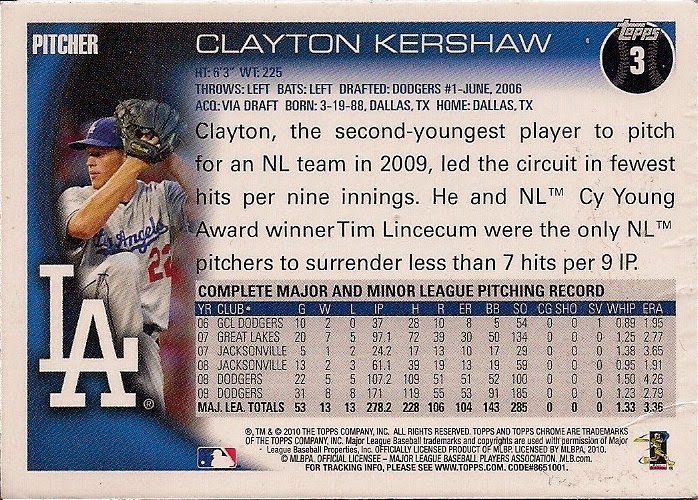 Chromey Kershaw is still as shiny as ever, despite the scuff marks. It's also fairly sharp, although the top left corner is dinged and the bottom right corner is a little bent (you can't really see it on the scan).

The card back already features some weather/wallet damage on the right side.

As for the big question -- is a 2010 Chrome card finally flat now that it's spent a week in my wallet? No, it's not flat. It's not curved in the same way 2010 Chrome tends to curve, but it's certainly not flat.

Anyway, I'm hoping that the weather eases up for the rest of winter.

Any more snow like this and Wallet Card won't last through April.

Zippy Zappy said…
Very nice. Given how the '10 Chrome card I had living in my wallet turned out, your card probably won't get flat (ever) but it will get flatter over time.
January 12, 2015 at 9:48 PM

acrackedbat said…
Kershaw looks great in his colorful, shiny glory on the snow close up. He didn't appear to be much help with the snow chores tho. Savin' the arm for Spring Training I guess.
January 12, 2015 at 9:51 PM

AthleticGigantes said…
My 75 mini Cesar Tovar, a.k.a., "Little Cesar" is living in my wallet. Like your Clayton card I'm taking Little Cesar outside. However, around these parts of California there is no snow. So, Little Cesar will be able to go backyard camping for one night (Tuesday night). The night air and morning fog should speed up the wear and tear to the already warped card. It should be interesting.
January 13, 2015 at 12:52 AM

GCA said…
Thought these were just supposed to weather constant storage in your wallet, not get walked and played with like a pet....? :)
January 13, 2015 at 9:35 AM

AthleticGigantes said…
GCA - I was hoping someone would bring this up. Yes, I agree. But let's have fun with the cards we elect to mutilate in our wallets. Why not take them out for walks or some other adventure. It's all a bit silly but what the heck. We treat these cards with too much reverence, i.e., top loaders, grading, so let's demystify the cards a little. No, I certainly will not treat my favorite rookie cards in this manner but we all could afford to sacrifice one card to the hobby gods. Have fun and do what you'd like to do to your card(s). I've got to go as it's camping time for Little Cesar. Cheers.
January 13, 2015 at 10:15 PM