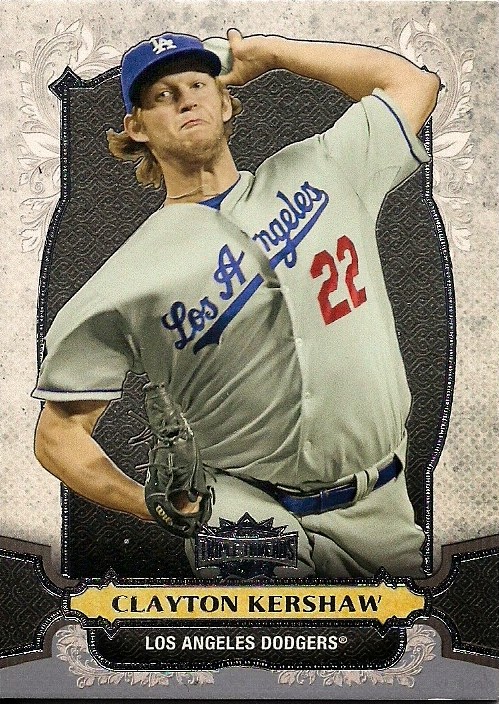 I admit I follow nothing about Triple Threads. It's not a product for me, nor, I venture, for a lot of card collectors with blogs. It's out of my reach and outside of my interest.

So I don't know if this has been discussed -- particularly because nobody buys Triple Threads for the base cards -- but has anyone noticed that this past year's Triple Threads cards are thicker than they have been previously?

The 2014 Triple Threads card is on the right.

So why do I care?

Well, I never buy Triple Threads but I always end up with a few Dodgers each year. People are good enough to throw me a base card bone and I have Triple Threads Dodgers base cards for each year since 2007.

I like this because I like to get at least a sampling of each brand of card -- it keeps the myth going that I am going to one day complete every Dodger team set ever.

And I treat Triple Threads like every other card brand. I put them in pages in a binder with other Dodgers from that year. Triple Threads may think it's more special than others sets, but actually it's not. In fact, it's downright ugly. There has not been a base design of Triple Threads that I have liked yet.

But now that the cards are thicker, I have an issue with storing them in pages with the other cards. The thickness now warps the page pockets and that's not good because I'm forever updating the Dodger binders, advancing cards to other pages, and that means a card with regular thickness is going to end up in one of those warped pockets.

That's probably what TT wanted all along. To be displayed in a top loader -- or better yet, a screwdown -- like it was special.

But I don't want to do that. I have no desire to look at a Triple Threads base card in a top loader. It's ugly. It shouldn't see the light of day.

So I think I'll devote a couple of pages to Triple Threads cards and never move them out of those pages. Or I'll just throw them in a box, with worthless items like 1990 Donruss and Bowman prospects who never made it.

Triple Threads in a shoebox.

Big Tone said…
Im not a collector of anything high end these days but I know what you mean.Remember Bazooka Golden Chunks?Ive got a binder full of RCs and Bowman Prospects that I could get refunded.
January 9, 2015 at 8:53 PM

hiflew said…
I consider Triple Threads (and other thick cards like Marquee or Museum Collection) on par with Ginter-style minis and relics/autos. My Rockies collection is in binders except for my minis, relics/autos, and thick cards. They even have their own column on my spreadsheet. Originally I kept them with my regular cards, but I got tired of having to replace sheets. I store cards by player instead of by set, so I have to move cards often. Trying to slide a thick card over 1 or 2 places just screw up 2 slots. I am much happier now that they are (forgive the term) segregated.
January 9, 2015 at 10:09 PM

The Junior Junkie said…
When I received my first Griffey from the 2014 set I knew pretty quickly that either it would destroy a page pocket, or the pocket would destroy it. It sits in a plastic card case with all my other too-damn-thick Juniors. I'm also not crazy about the design nor the parallels.
January 10, 2015 at 10:21 AM