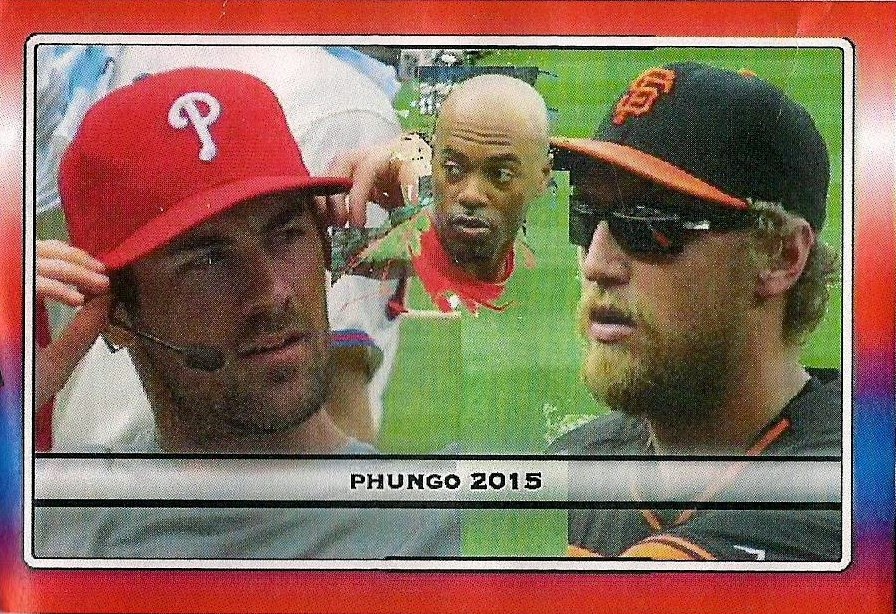 I don't know why I bag on January so much. After all we did just get rid of college football last night.

Also, January is the month when anticipation for the year's baseball cards is at its highest. How can I dislike a month when it signals the arrival of baseball cards? Why just today, Topps said this. Come on, man, despite what you think of Topps' modern baseball card ways, NEW BASEBALL CARDS ARE COMING! IN LESS THAN A MONTH!

So what does one do to tide themselves over until then when they've been built into such an anticipation frenzy that they're running around the bedroom nonstop?

Well, if you're lucky like me, you get Phungo Cards ever January! Another reason to like this month!

I've received Phungo Cards from Phungo for at least the last five years. They are the first cards of the season. You could even call them the precursor to Topps' annual set. Because, like magic, once Phungo Cards arrive, Topps appears shortly afterward.

As usual, the pack includes Phungo Card exclusives mixed with more mass-produced cards that are tailored to my tastes. Phungo has got the marketing thing down. Topps could take a few tips from this.

But lets start with the unpleasant wrapper. I'm going to take this thing and chop it in half as soon as I'm done with this post. No wrapper should have Hunter Pence on the front. Or a Giant, period. 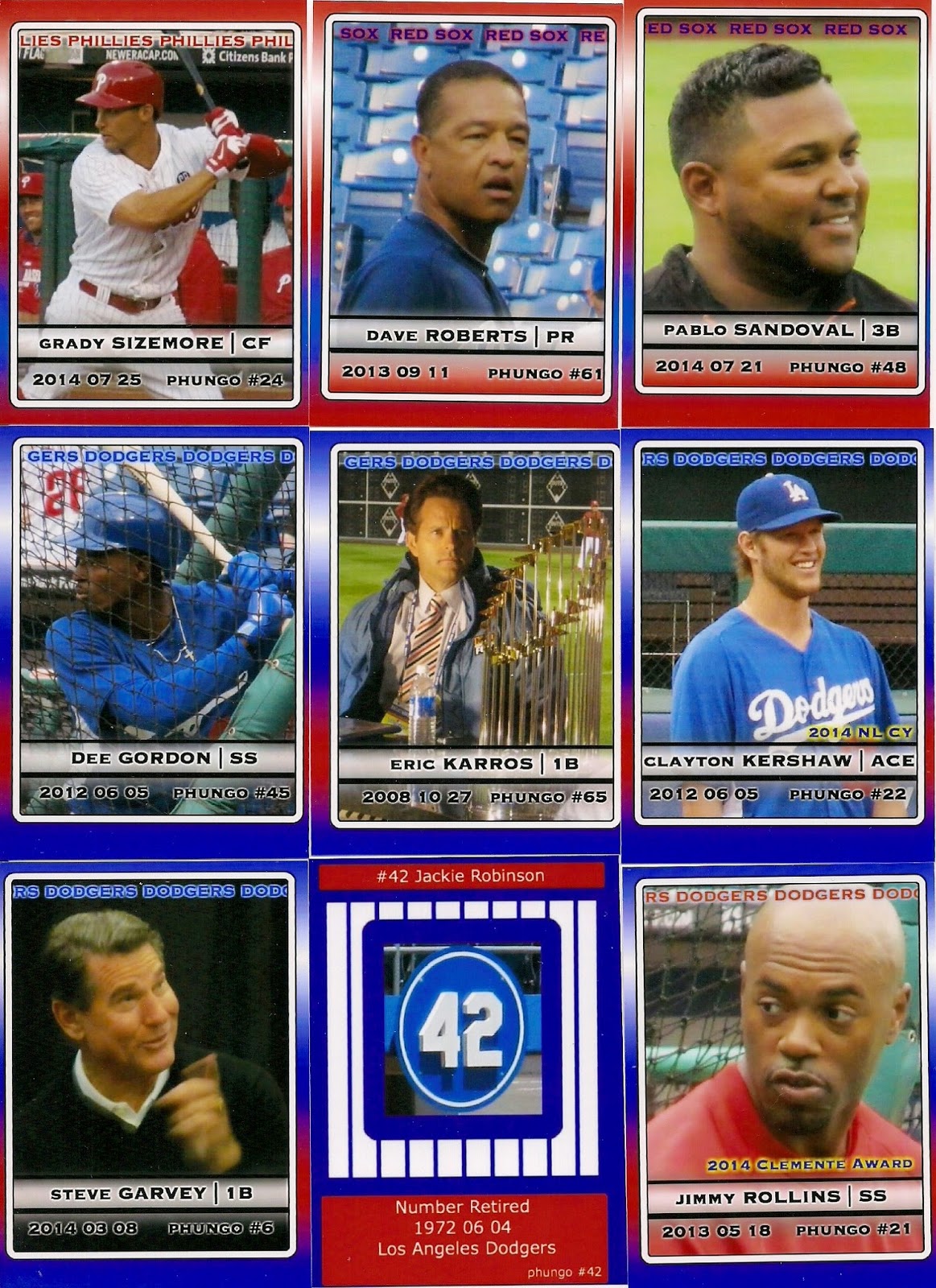 This year's design features a red-and-blue gradient border and some funky stuff that I can't explain because I'm not a designer. Last year's border design was color-coded depending on the team, which is something Topps is doing this year. Hmmmmmmmmm.

Among the highlights here are the Kershaw card (of course), Eric Karros staring vacantly at the World Series trophy (I'm assuming this was taken during the Phillies' 2008 Series championship), the FIRST Dodger card of Jimmy Rollins, Steve Garvey being his usual suave self, and another No. 42 Jackie Robinson retired number card -- this time from Dodger Stadium. This is a card that I wished for last year.

Gee I hope Phungo didn't go all the way out to Los Angeles just to get that done.

There was also one Phungo retro card in the pack, of one of the newest Dodgers: 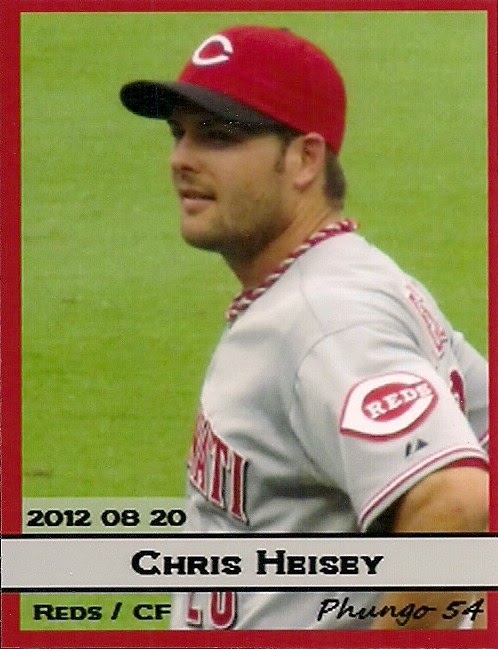 Mixed in with the Phungo cards were some righteous items for my collection. I really love what he picks out: 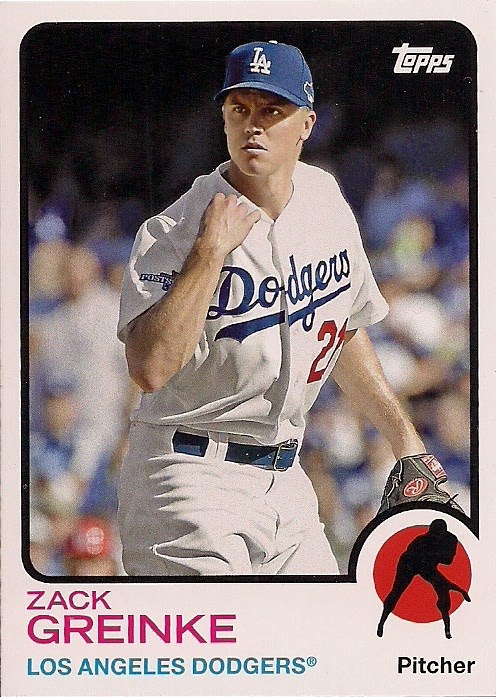 An elusive 2014 Archives card because no one apparently bought this set. 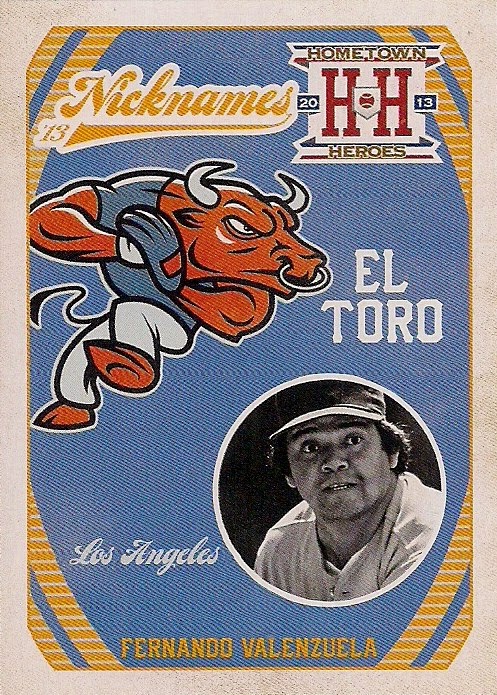 This nickname card is a lot less upsetting than the Ron Cey version. At least Panini didn't write "Baltimore" for the team name. I guess they have sense sometimes. 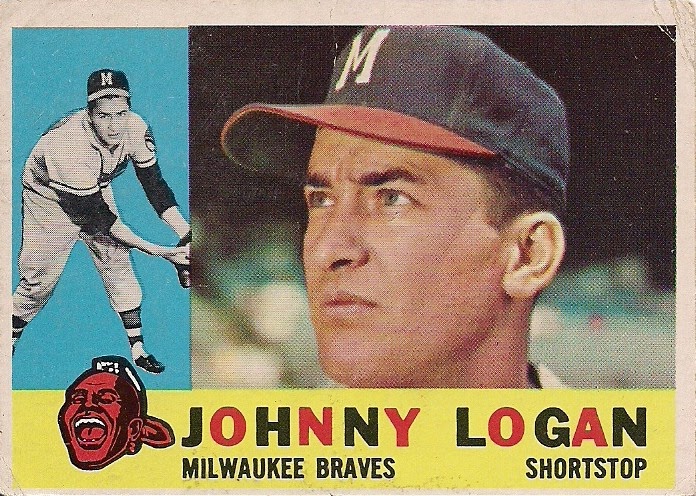 I'm going to have all the Johnny Logan cards yet. I can go back to my hometown and impress everyone, since Logan and I share the same hometown. Only nobody will probably know who I'm talking about because Logan was never brought up when I was growing up. 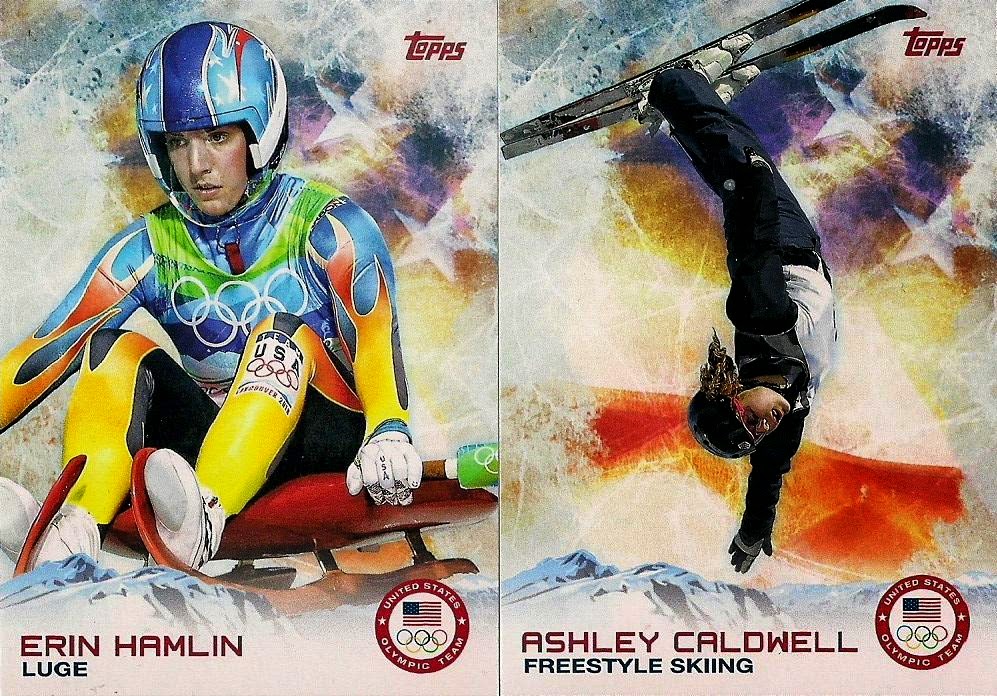 Phungo recently busted a box of 2014 Topps U.S. Olympic cards. I should do the same since I live in winter wonderland and there are so many winter athletes with which I have a fringe connection.

Erin Hamlin is one of those athletes who our paper claimed for "our own" during last year's Olympics. She's from a small town called Remsen, which is north of Utica, but not in our paper's coverage area at all. No matter, we covered the hell out of her, jumped for joy when she won a medal, and then traveled to cover her in her victory parade. Now it's 2015 and we're back to ignoring Remsen. 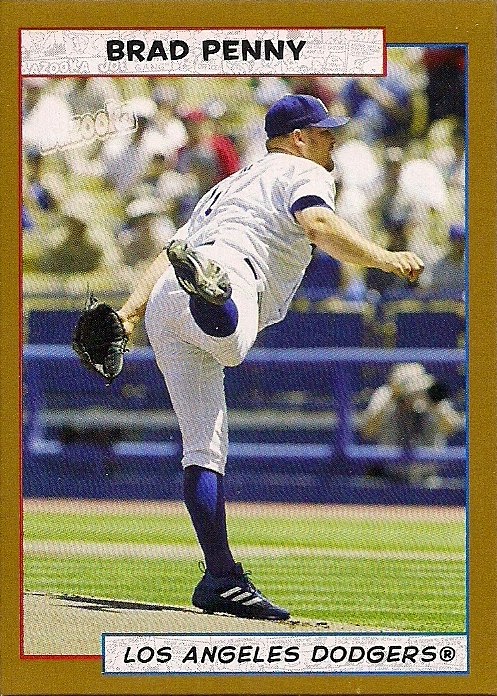 This is a Bazooka "Gold Chunk" parallel. It's one of the worst-named parallels ever, but quite fitting for the chunky Penny. 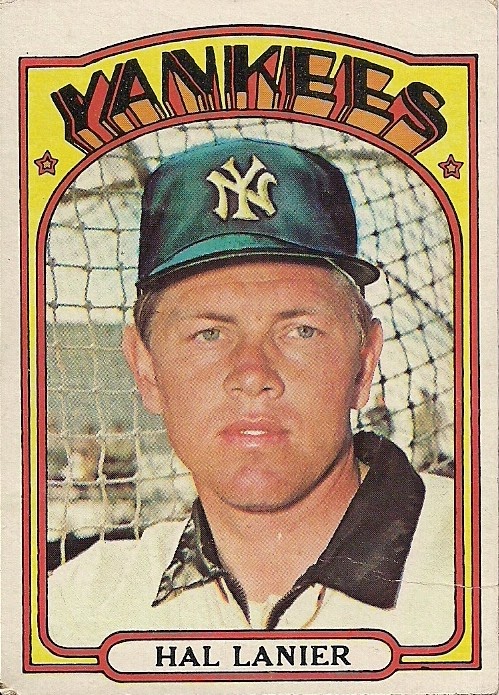 Now it's getting good! Here is a semi-high number from 1972 Topps. Note Hal Lanier's cap. The '72 set marked the period in which Topps transitioned from airbrushing a player's cap so there was no logo at all to these "artistic renderings" of team logos. 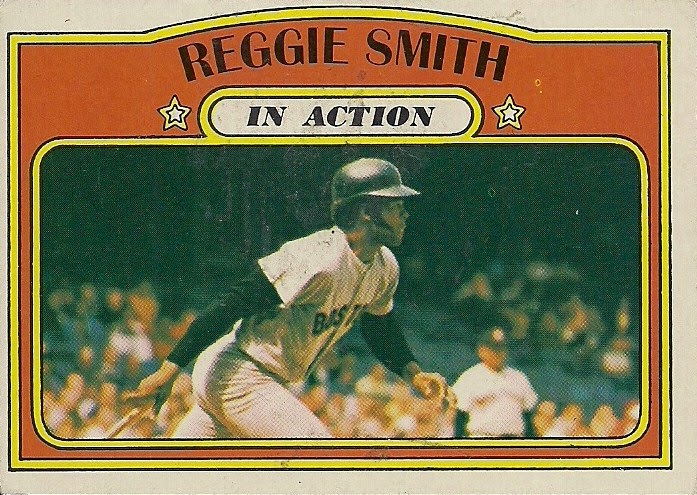 I enjoy how Topps chose to highlight Reggie Smith's sideburns in this action card. Sideburns In Action!

And look on the back: 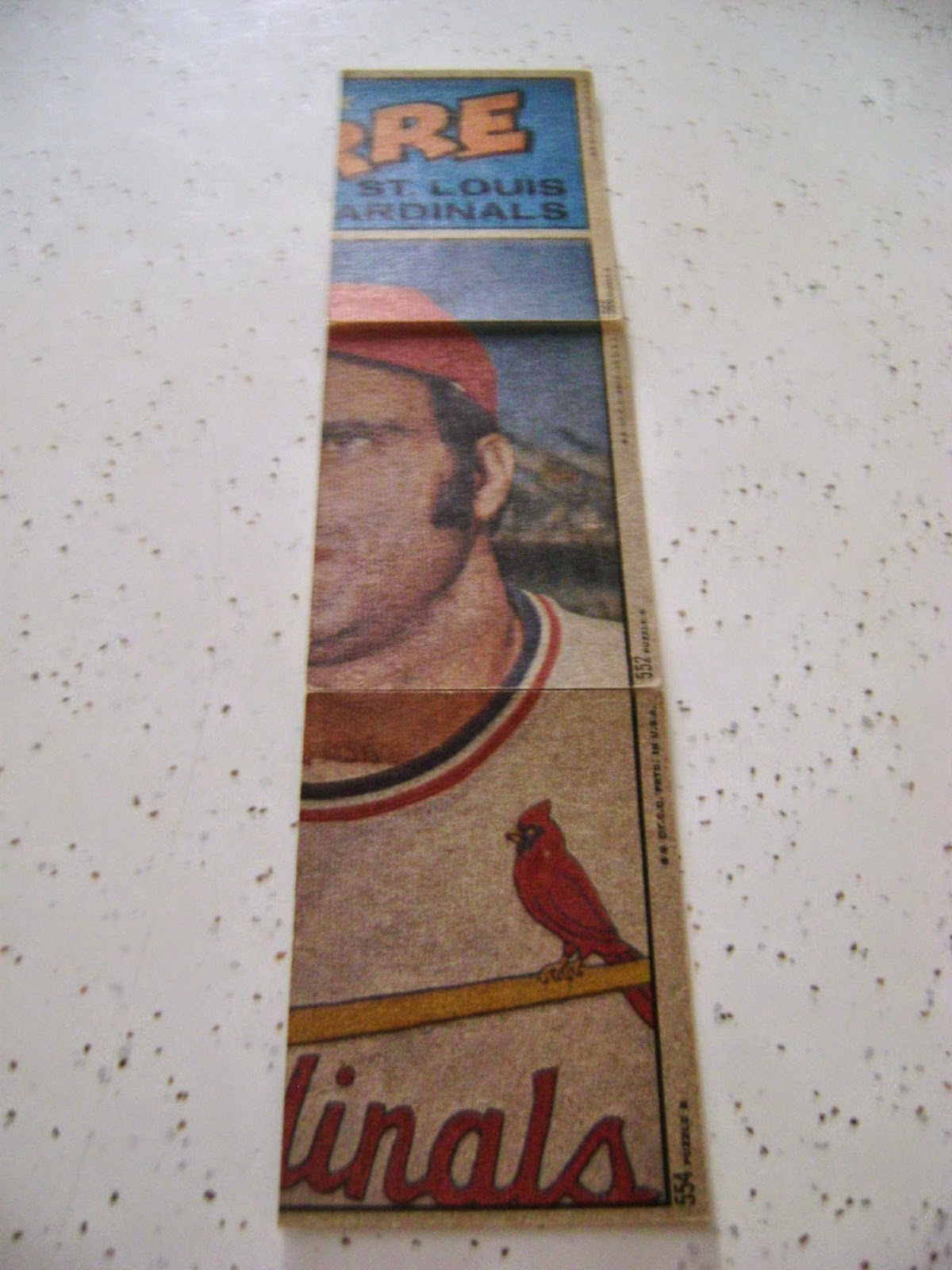 I have now completed the right side of the Joe Torre puzzle, which was featured on the backs of this series of In Action cards. Reggie Smith is the top card of the puzzle. 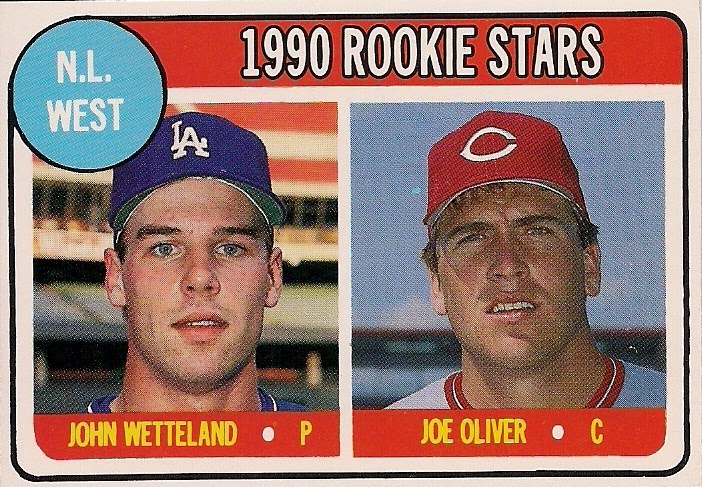 These Baseball Card Magazine "replicards" always escape me. And always remind me of dinosaurs. 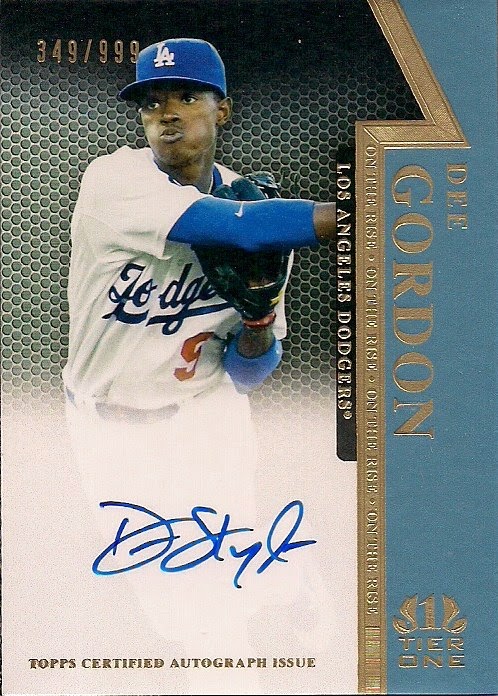 Oooh. I tried to pick up one of these cards a few years ago, but it turned out I didn't have enough cash with everything else I was buying. This is a beauty as it's an on-card auto. Also, Dee Gordon signs his name as Dee Strange Gordon. Strange was his mother's last name. 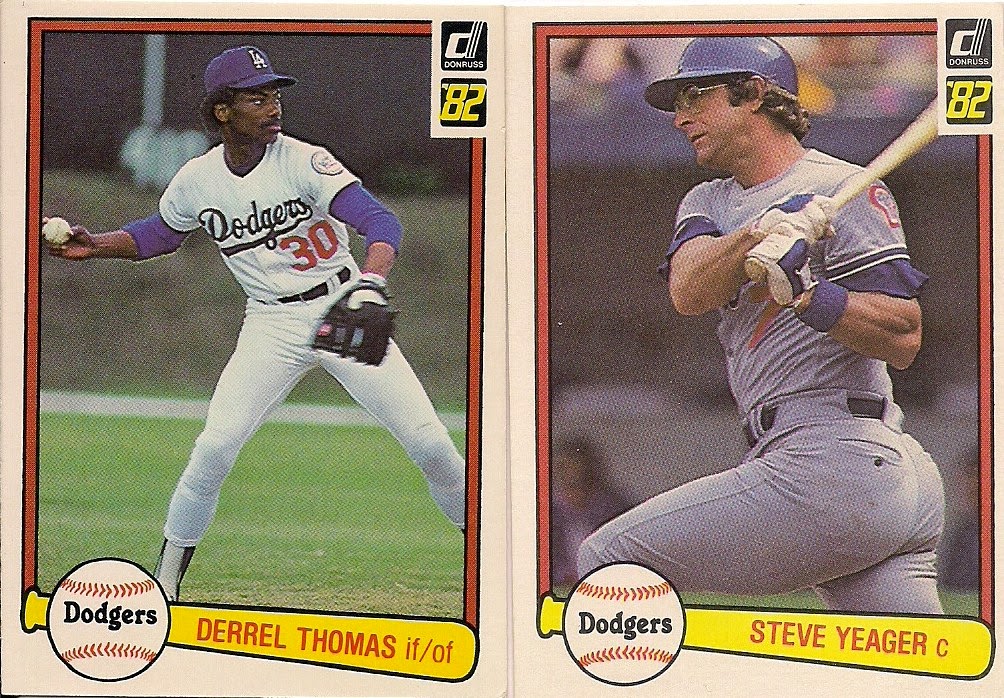 These will come in handy in the event I decide to complete the 1982 Donruss set, which would mean that I own so many cards that I have nothing left to complete. 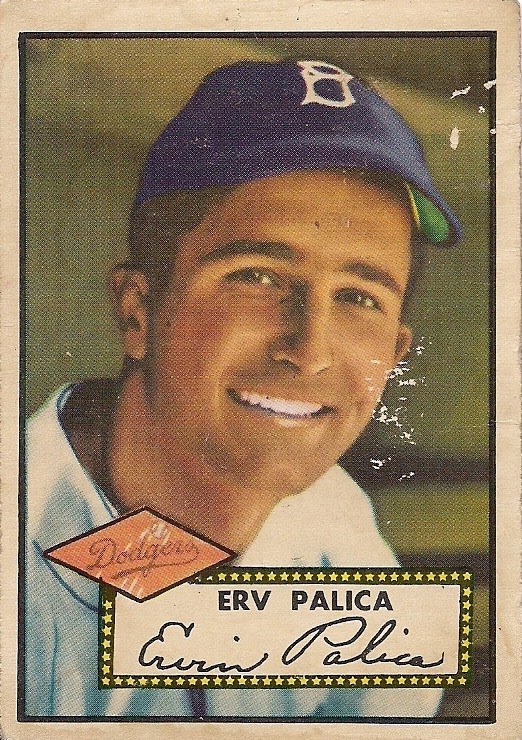 Let's end it with a 1952 Topps Dodger. Just wonderful. The front is in better shape than the back, which looks like it was glued to a wall. I don't know what it was with kids from the '50s and gluing cards.

So, all of those Phungo goodies should keep me happy until 2015 Topps arrives.

After that, it all goes south.

Paul Hadsall said…
This is the only time of year I still get excited about new baseball cards. I can hardly wait for baseball season to start.
January 13, 2015 at 10:56 PM