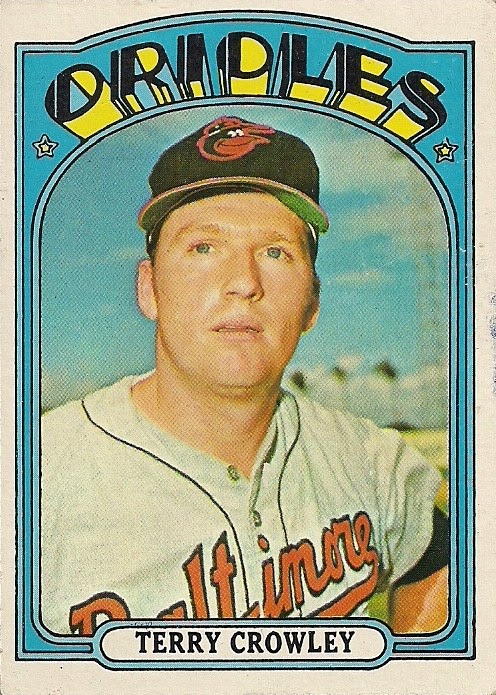 A couple of 1972 Topps cards from my want list arrived in the mail from Mark Hoyle the other day. I promptly crossed them off and then it occurred to me:

How come I haven't examined the color schemes in '72 Topps like I did with 1975 Topps?

OK, yeah, '75 Topps holds way too many personal connections for me not to dissect every aspect of it. So I can see why I did that first. But I love '72 Topps for a lot of the same colorful reasons.

I mean look at the two cards that Mark sent me. 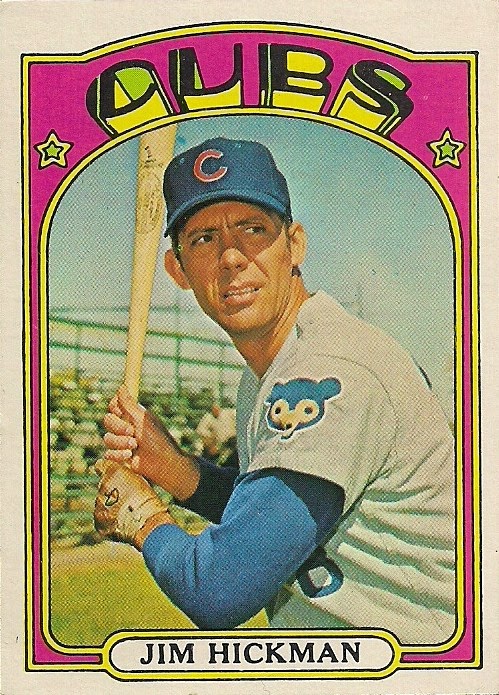 Rich, deep blue with bursts of yellow and bright, hot pink with yellow and green accents. COME ON! It's screaming at me to dissect it!

So that's what I'm going to do.

Unfortunately, I haven't completed the whole set so I can't do an authoritative rundown of how many cards featured blue borders and how many displayed pink borders. But, believe me, when I do complete it, brace for that post. It's coming.

No, what I can do now is kind of an introduction to the colors used with teams in '72 Topps.

There were eight background colors in 1972 Topps. I define the background as the color behind the team name and the stars. It's the color that takes up the most real estate on the card.

But let's stop writing in abstract and provide the visuals: 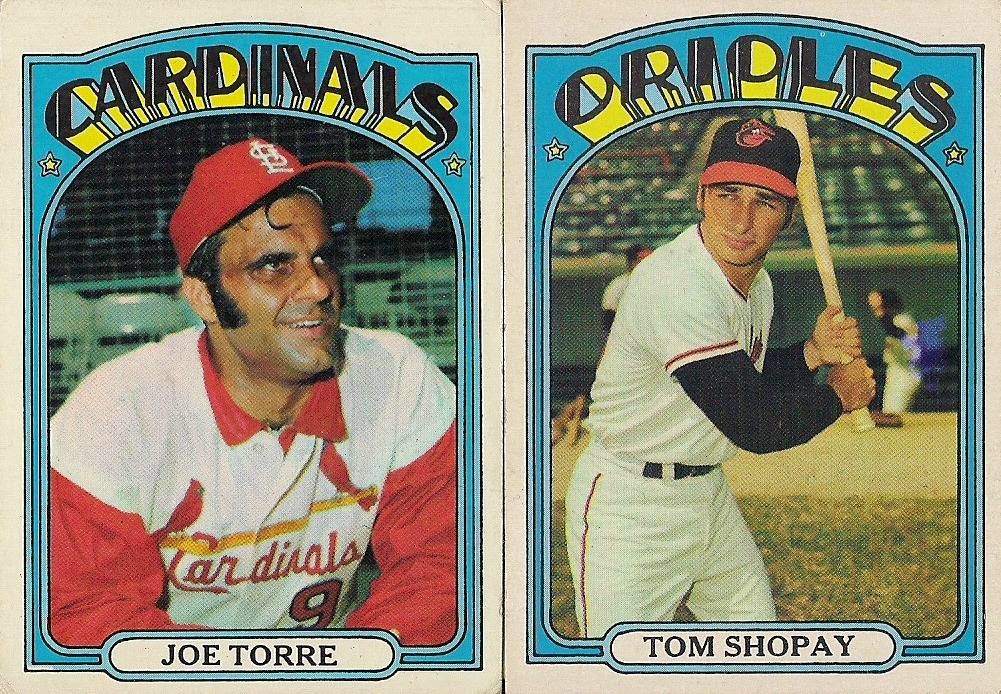 This is my favorite combination. Oh sure, Joe Torre detracts from it a little because he always looked like a serial killer in his playing days, but the Cardinals and the Orioles, without a doubt, won the lottery as far as color schemes in '72 Topps. I love the rich, blue color. The yellow adds balance and brightness. This is the closest color combination to "night time with the lights on" so you know I like that. 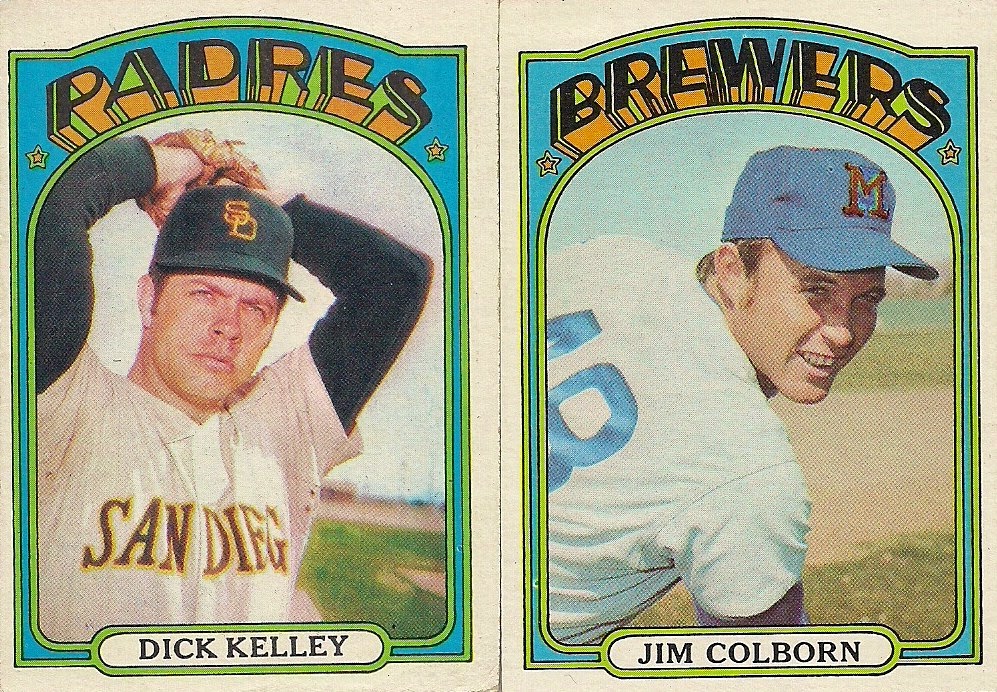 This doesn't work nearly as well as the Cardinals-Orioles colors, although it fits very well with the Padres, making the Padres one of the most well-complemented teams in the set. Everything matches. The same could be said, to a less impressive degree, with the Brewers, who were wearing orange and blue at the time. 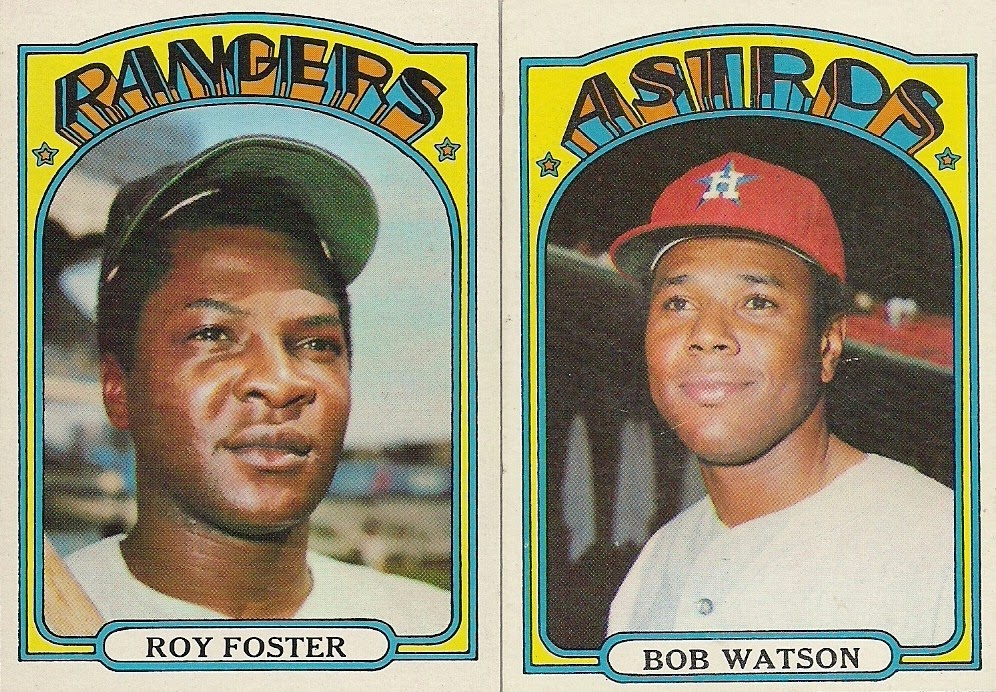 This color scheme bellows 1972 Topps for me. It's loud. It's colorful. It's what makes '72 Topps '72 Topps. I especially like the colors with the Astros cards. I am drawn to those cards probably more so than any other team's cards. The colors don't work quite as well for the Rangers because all of the Rangers photos are duds, the unfortunate result of the Senators becoming the Rangers when Topps was producing the cards. 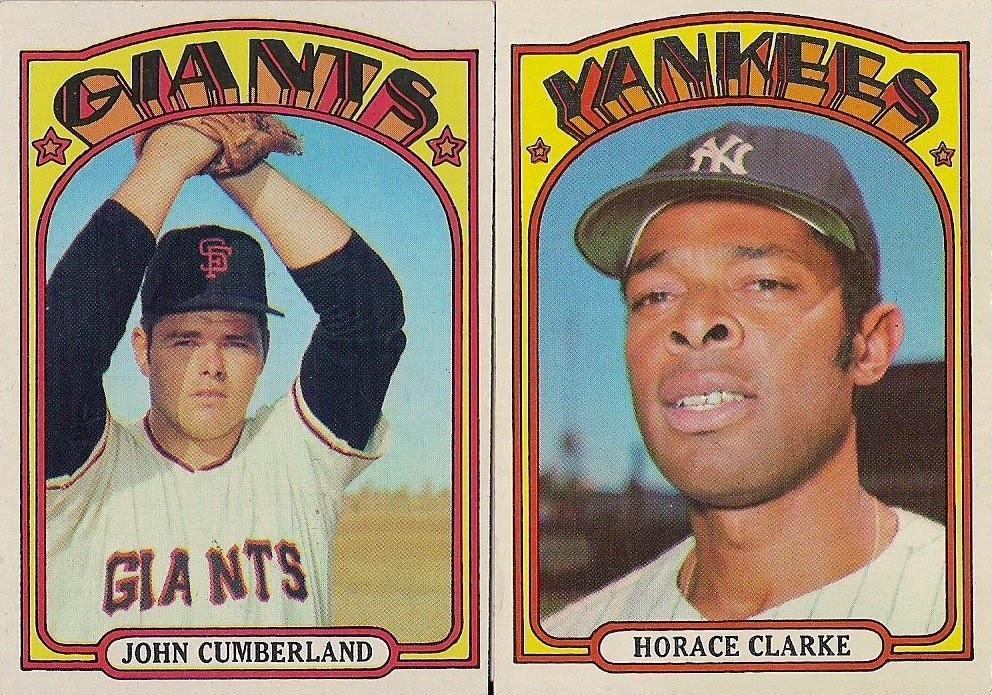 How about that? My two least favorite teams share the same colors. I remember being annoyed that the Yankees received the yellow backgrounds because I thought that was a premium background and the Yankees were hogging it as usual. But the red and orange doesn't work as well as the blue and orange. Yellow, red and orange are the colors you see with fast food restaurants all the time. I feel like Cumberland and Clarke are going to hand me a hot dog. However, the colors work very well with the Giants. Goody for them. 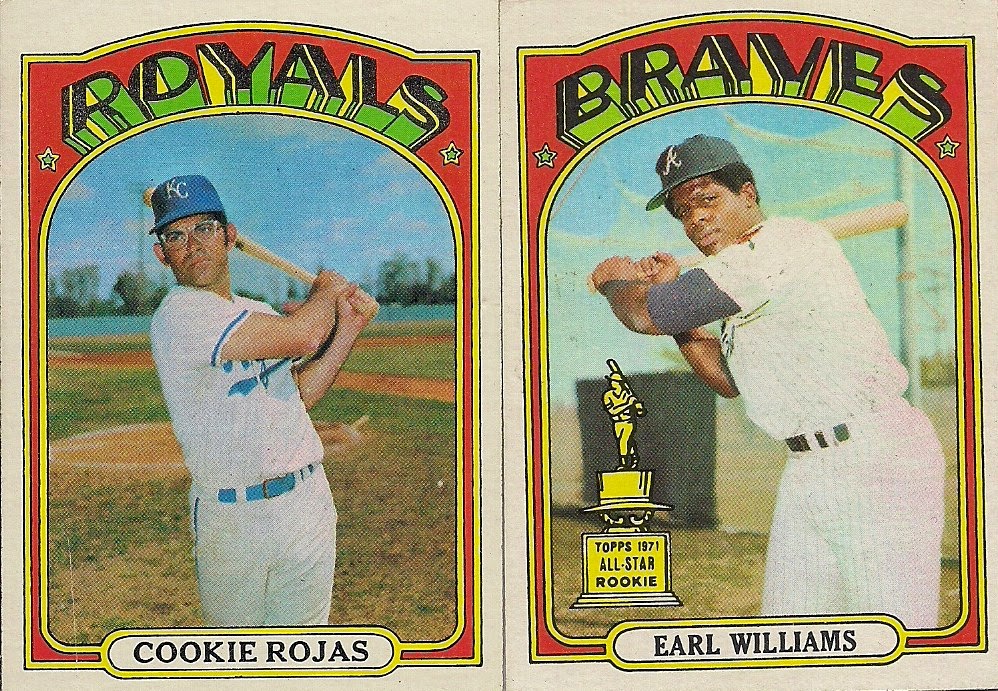 Anytime light green pops up in these cards, I like them less. But I suppose these are not horrible. The red looks more orange-red than red, possibly because of all the yellow. The Braves and Royals cards are also very, very bright because you can't get away with this color combination and claim to be understated. 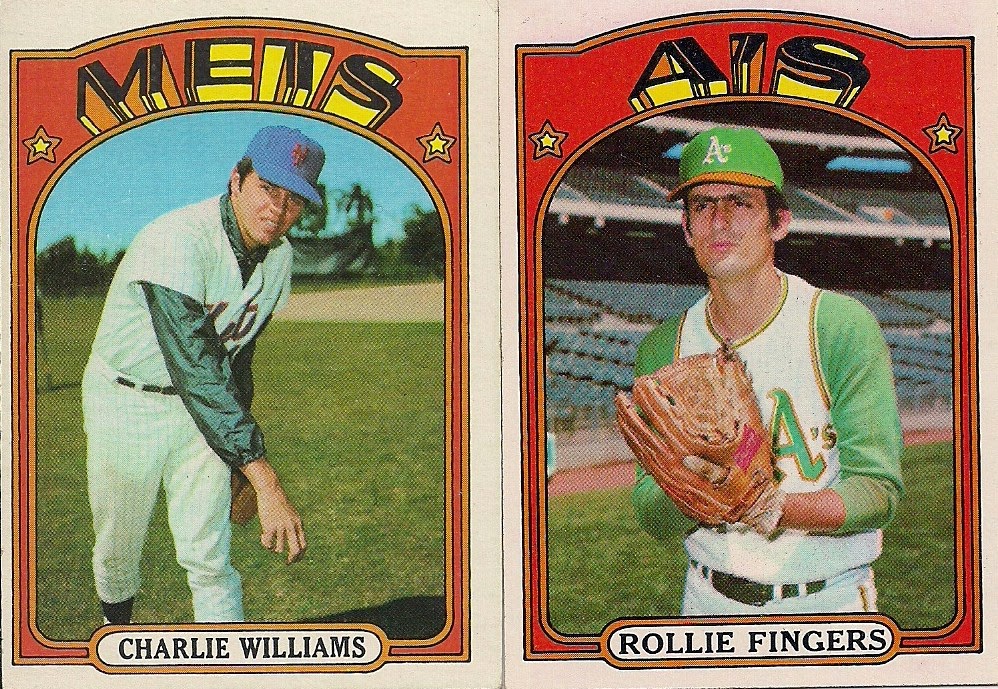 Red really is the major player in this set with Topps not only using it for four different teams but also for the In Action cards, postseason cards and Boyhood Photos of the Stars cards. I also get the feeling that red was used to highlight some of the elite teams in baseball then, as the Mets and A's were at the time. Orange goes with the Mets, but I'm not fond of the red and orange, especially with the A's. 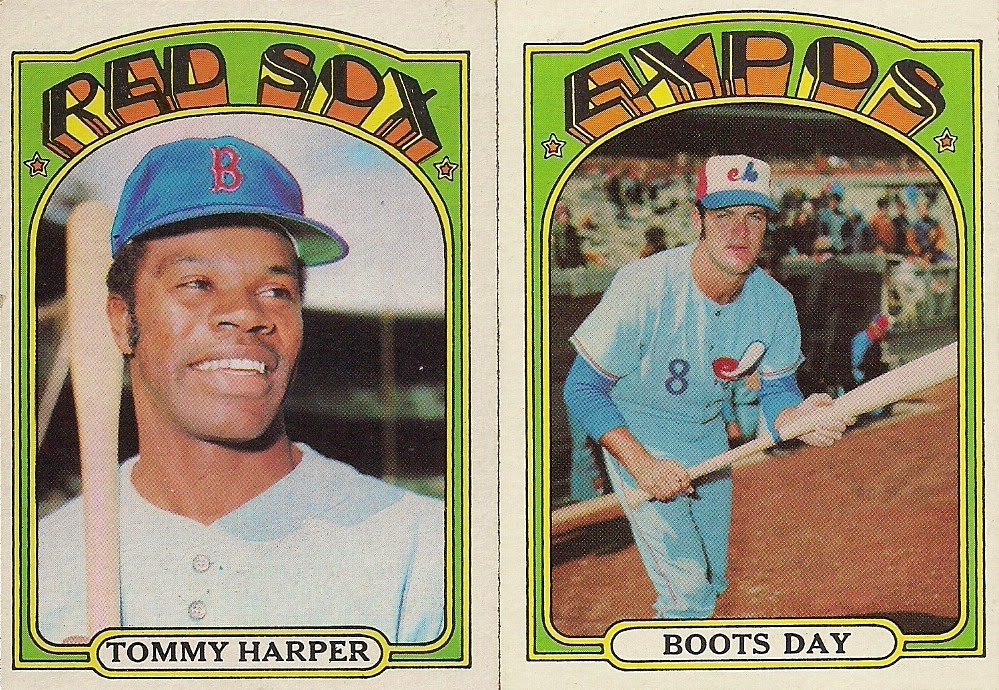 Eyes-to-Jefferson-Burdick, those are ugly cards. If you ask me, these cards are holding back the entire set, although they're not so bad when looking at the set as a whole. But an entire team set of Red Sox or Expos could be nauseating or radioactive. Or radioactive and then nauseating. 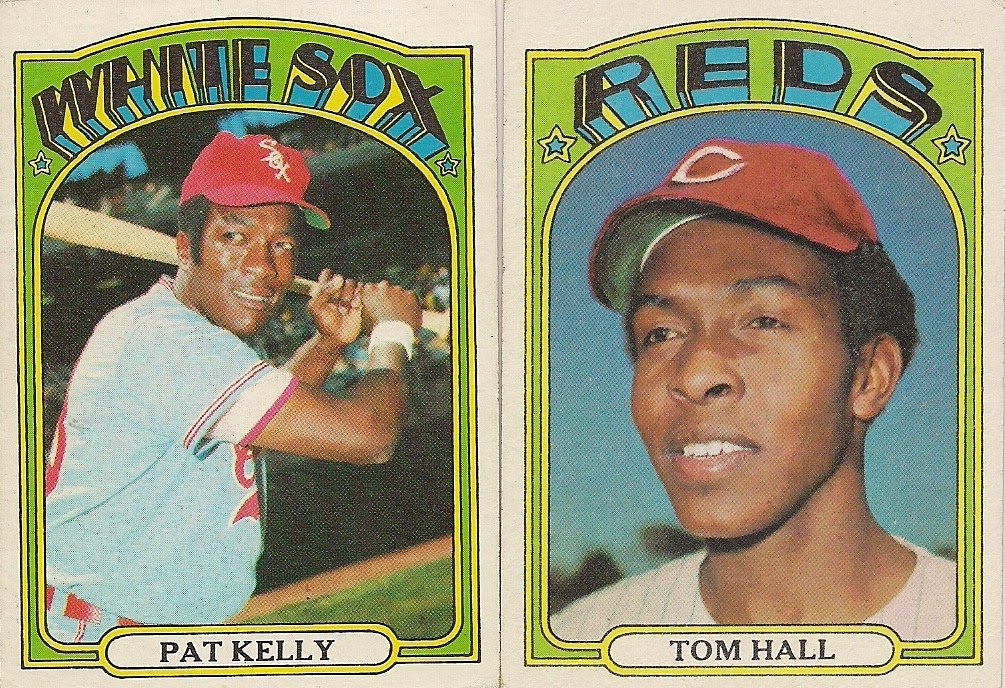 Also ugly, although in a slightly more muted way than the Expos and Red Sox cards. Despite that I've always taken pity on the White Sox in this set for having the ugliest cards. I don't know why I've given the Reds, Red Sox and Expos a pass, but that's the way it's always been. I know these cards should make me thirsty for Sprite, but I'm too repulsed. 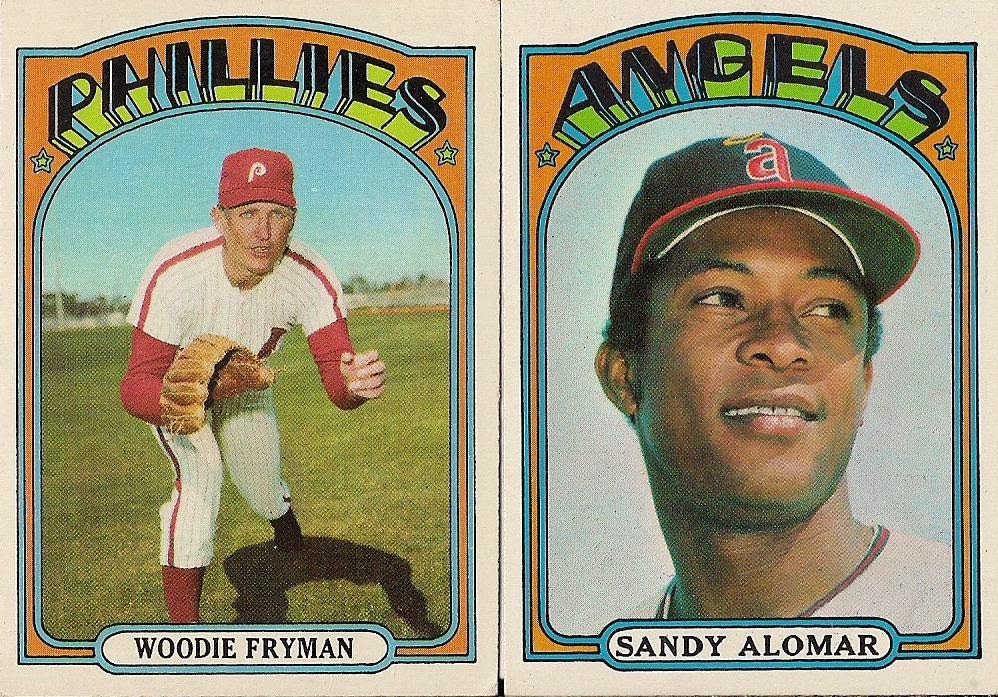 Another group of colors that really shouldn't go together, yet I find these much more pleasant. Orange and green were big, big, big colors in the 1970s, so I think of this color scheme as being very of its time. 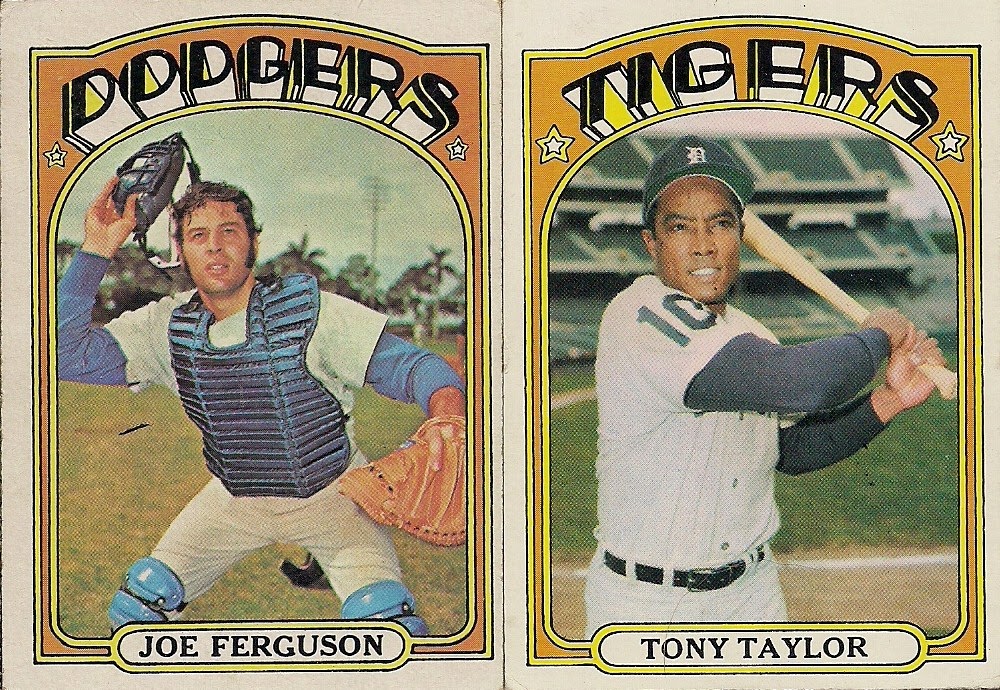 I had to compare and contrast repeatedly to make sure that "orange" and "light orange" weren't really the same color. But I finally decided the orange background with these two teams is lighter than what is used with the Angels and Phillies. However, the major issue with this scheme is how dull it is. One of the colors used is white. White! This is 1972 Topps everybody! There is no room for white! I've often wondered if some Topps graphic artist simply forgot to color in the Dodgers and Tigers cards. As a Dodgers fan, this is very disappointing. 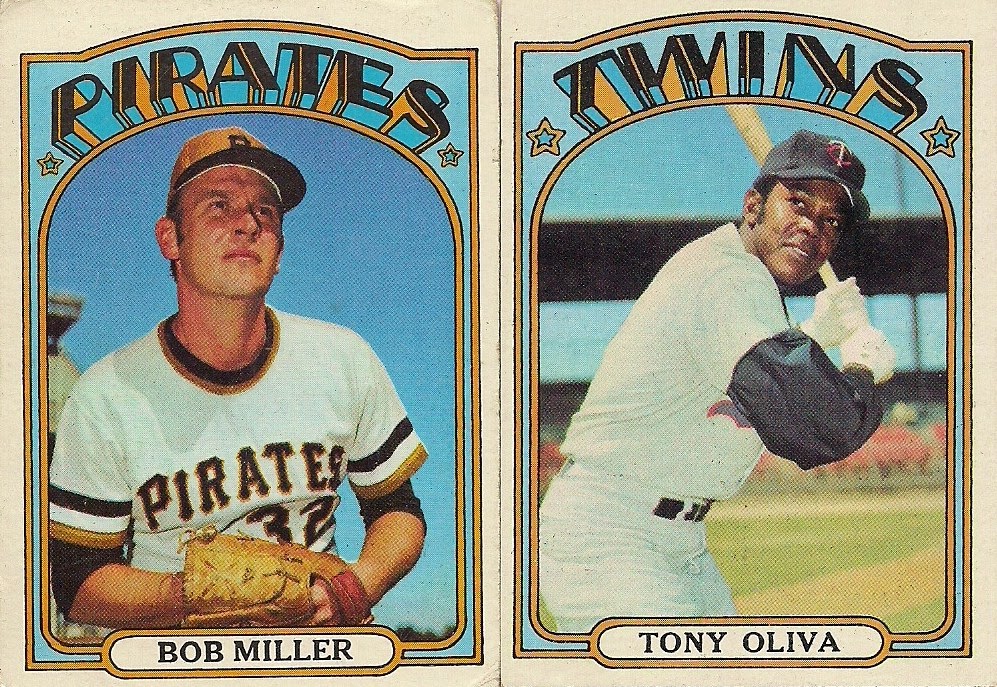 The light blue color scheme should have been showcased with four teams. It's too pleasant to be restricted to two. I like the Pirates cards in this set quite a bit. The orange goes well even though the Pirates wear gold. 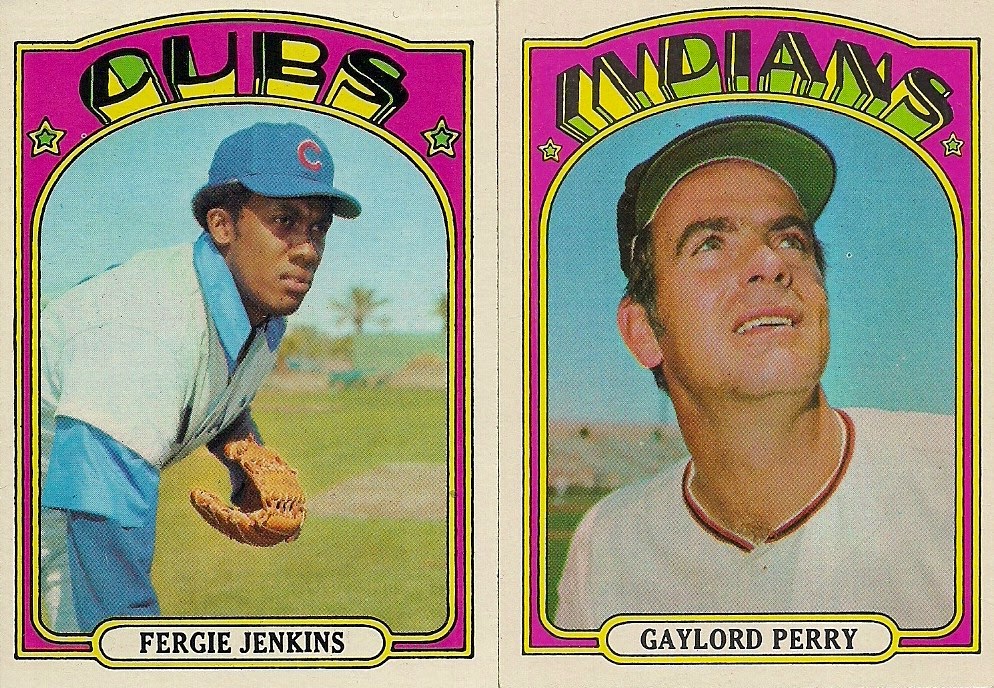 God bless the '70s. These are the cards that you produce when some alien lands on the planet and says "tell me what 1970s baseball cards were all about" and you shove them in front of his giant eye, in all of their blazing pink splendor, and exclaim THIS!!!!!!!! I'm wondering if Topps held this color scheme to just two teams because it didn't know what the reaction would be. But I love these, and the Cubs, especially, are real winners in this set.

Obviously, I know already which color background appears the most in the 1972 set. It's red. And I know that pink and light blue don't show up as often as the other colors.

But I need exact numbers. Which is yet another reason why I will not rest until the 1972 Topps set is complete.

Jamie Meyers said…
I thought it was weird then that the Yankees got yellow and I still that's the case since yellow has never been been anywhere close to their color scheme. But there was no black or even dark blue background so maybe they got it by the process of elimination since they appear to have doled out color schemes in even numbers and somebody had to complement the Rangers. That said, I always thought the green worked well with the Reds, not so much with the Red Sox.
January 18, 2015 at 8:59 PM

Tony L. said…
I think the Brewers were still in Yellow and blue, not orange -- due to the color scheme left behind by the Seattle Pilots which continues to this day in many respects. It's just Topps's airbrushing that made it look orange!
January 18, 2015 at 9:25 PM

Commishbob said…
Topps had some issues with 'orange' and 'light orange' as far back as 1959 I think. When I was parsing colors for my '59 blog I originally considered there to be two distinct shades. But one night I had all the orange cards spread out on my desk and to my eye there were all sorts of variations. I finally decided that 'orange' was 'orange' and age/printing variations, etc. was behind the differences. But I'm still not totally sure.

Great post, btw. I love this stuff. I like the Orioles/Cards combo but I think the Yankees/Giants yellow-red-orange is my favorite.
January 18, 2015 at 9:56 PM

David said…
Did you notice that the blue-orange shading for the letters of the Rangers are reversed on the Astros? Maybe that's one reason you are more drawn to the Astros cards.
January 18, 2015 at 11:35 PM

GCA said…
Best part is that the color person must have been hypnotized by the pink and green and created variations on the lower part of the Cubs letters...