January 24, 2015
(Greetings. Today is Beer Can Appreciation Day. It recognizes the day when beer first became available in cans in 1935. And they say The Depression was a terrible time. Pop open a cold one and appreciate beer in a can AND cardboard. It's time for Cardboard Appreciation. This is the 220th in a series): 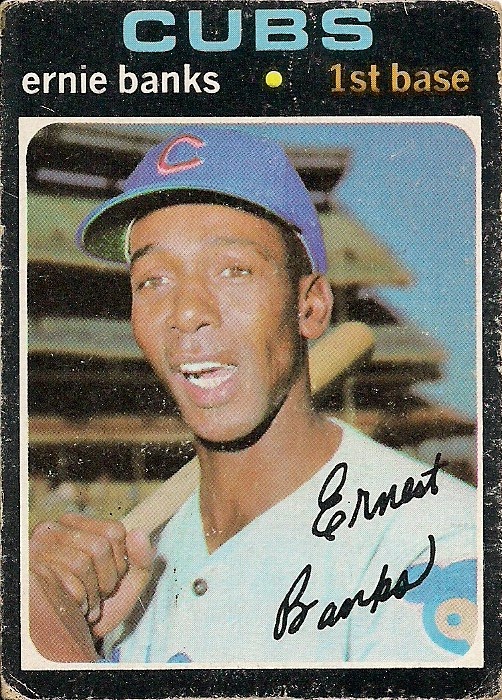 This is the first Ernie Banks card I ever owned.

Well, not this particular one. When I was first getting back into card collecting, a guy I knew at work liked Banks a lot and wanted my 1971 Banks card. Even though the '71 set was a distant collecting goal of mine at the time, I traded it for a bunch of '75 Topps cards, and regretted the deal only slightly.

But it was enough regret to cause me to trade for another one not long afterward. This card isn't in as fine of condition as my previous Banks -- it was quite a feat that one of the first '71s I owned was a well-conditioned Ernie Banks card -- but it served my purpose, the set is complete, and I ain't feeling no pain.

The news of Banks' death broke around 10:30 p.m. Friday. I was working. The guy next to me said "uh oh" in that way that means "there's a story coming that's going to force us to ditch a lot of the work we just did for the last hour-and-a-half."

From there, I checked the wires and the online media for news of Banks and waited impatiently for stories and photos to come in, so we could squeeze some sort of recognition of the passing of a baseball icon into the paper before deadline.

I didn't realize it at the time, but I felt a little bit sad when I was doing this.

Amid the frenzy, I felt the need to look at a Banks baseball card. I didn't remember posting the '71 Banks on my blog, so I searched out the 1956 Topps Banks card that I nabbed at a card show just last year. I have this need to gaze upon a card of a player who has just passed because it somehow makes me feel better. And that's what I tweeted, just to get some of the pain out.

I have no real connection to Banks. He retired before I even knew what baseball was. I'm not from Chicago. I'm not a Cubs fan -- far from it, in fact.

But the loss of Banks is devastating to baseball, perhaps more so than the passing of other Hall of Fame greats.

Banks' attitude about baseball, his "let's play two" mantra, and his sheer love and joy for the game is something we need.

Today's baseball world isn't as sunny as Banks was. Sure, there are players who enjoy the game and are grateful they get to play it, but how grateful would they be if they made the money Banks did and played doubleheaders as often as he did?

Oh, the grumbling you would hear.

We live in an age of a much more cynical ballplayer. A ballplayer who values his time, his body and his space. "Playing a doubleheader? How will I be compensated for that?" But this isn't just about today's baseball player, it's about today's world. You've seen Twitter, chat forums, YouTube comments, Facebook rants and the general sarcasm and satire in today's most popular movies and TV shows. The bitterness. The entitlement. The relentless criticism. I'm just as guilty on this blog and in real life.

"It's a great day to play two." Yeah, this would fly with some people. We could handle it and favorite it the first time or the second or third. But that sunny disposition over and over? Imagine someone coming in to work every day saying, "Isn't it a great day?" Would we be able to handle that? If Ernie Banks was an office worker, we'd be plotting for ways to get him fired.

I need players -- and everyday people -- like Ernie Banks to show me how to act, how to behave, how to talk about the game in a positive manner and not be ripping every manager, umpire, player all the time. Sure, joking is how we deal and I'm sure Banks joked a lot, but I never got a mean-spirited vibe from him. And I certainly never heard him whine. If he did, he hid it well.

Banks was -- and still is -- a role model. We need veteran players from the '50s and '60s, who played when the money wasn't there and the field conditions and hotel accommodations were merely adequate, to show us what true love for the game is.

I guess what I'm saying is these players have wisdom and we need it.

Banks was baseball. He played the game in a way that none had seen before. A shortstop with 47 home runs in a season (note that the 1971 Topps card has him playing first base. So do his 1963-70 Topps cards; he played more games at first than at shortstop).

No stories about not being respected. No demands to be traded. No plotting team against team to get an extra 20 million.

Just a living, breathing example of how we should regard this game.

It's a game. The sun is shining and look at all that green grass. Put down your devices, and let's play two.

Stubby said…
What I loved about Ernie was that he wasn't happy just being happy; he wanted everybody else to be happy, too. He would seek out people at occasions and gatherings that he suspected weren't full of joy and just try to get them to smile. That's a special human being, right there. As a Mets fan, I remember back to 1969 and it was impossible to dislike the Cubs as you reflexively do in a rivalry (much easier for me to dislike the Cardinals, Reds, and Braves--our rivalries since '69)--not with Ernie and Billy Williams and Santo and Kessinger and Fergie...but especially not with Ernie. I miss him already. I miss double headers, too.
January 24, 2015 at 8:20 PM

The only player I can think that plays with any joie de vivre is Nick Swisher. Alas, he is so over the top, I was glad to see him leave the Yankees. Maybe that says more about me than him.
January 24, 2015 at 10:45 PM

Anonymous said…
fantastic post...it's amazing how much impact an athlete can have on our daily lives and we tend to thrive off of their personalities. our society has become quite cynical and tends to search for the negative in something rather than just embrace the positivity. i've done it quite a bit with Russell Wilson...i keep thinking he's a fraud, but from everything i've seen and read, he seems like a genuinely good person...like Ernie Banks.
January 25, 2015 at 12:28 PM

Unknown said…
Another great post - I really appreciate your perspective on Banks, both his career and his personality.
January 25, 2015 at 7:24 PM