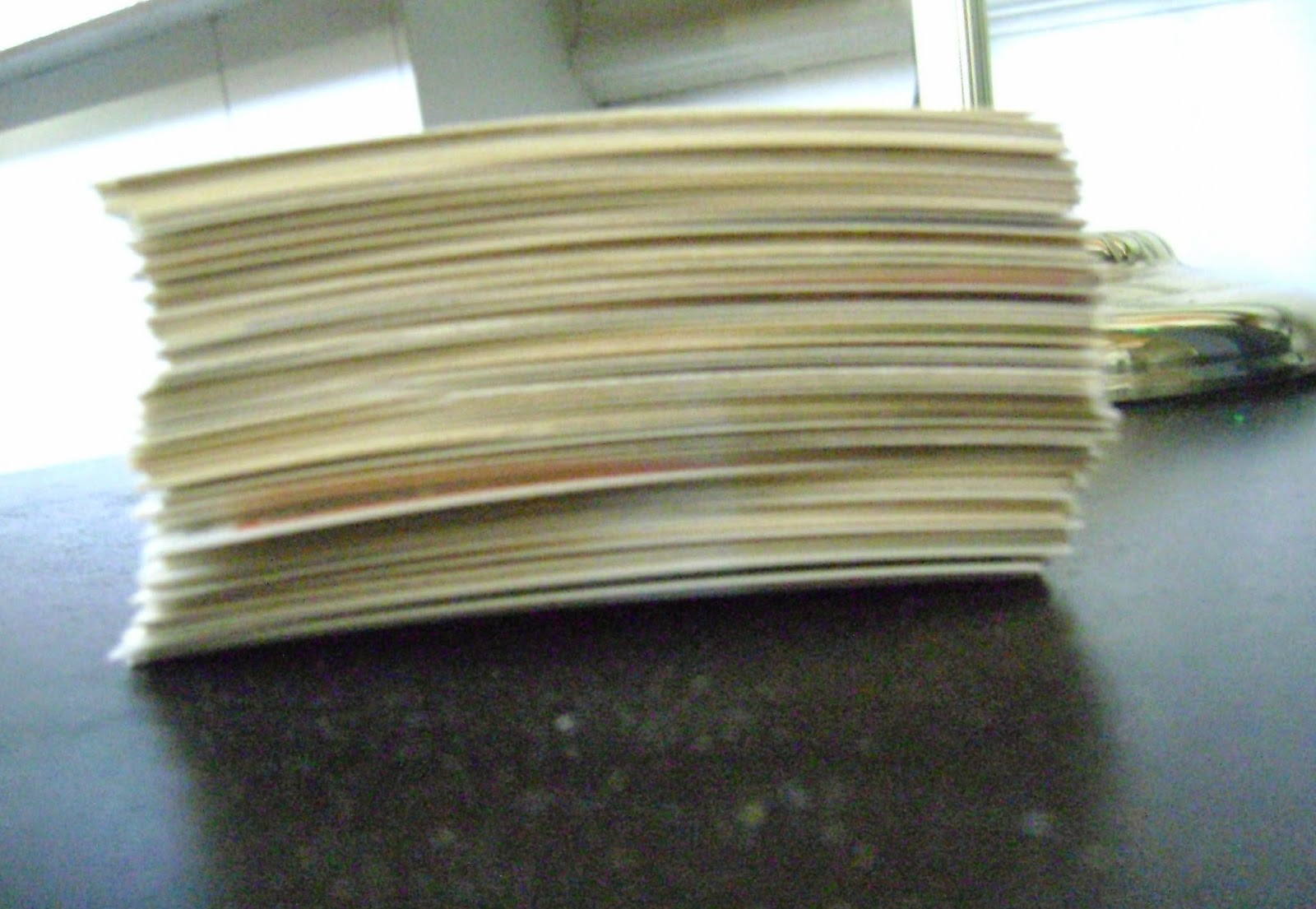 Well, I butchered that Dr. Seuss quote, didn't I?

That right there is a stack of 135 cards from 1981 Donruss. The No. 1 defining trait of '81 Donruss is its supermodel-thin card stock. And I do wonder whether 135 cards made of much sturdier stock would look more impressive next to this stack. But I've just scanned a bunch of '81 Donruss and have no time for science projects.

Instead, let's list some of the other traits for which '81 Donruss is well-known:

1. It's wafer-thin. But I mentioned that already.
2. It's plagued with errors. Every third card has something wrong with it.
3. Virtually all of the photos were taken in Chicago. That may seem repetitive, but after so many Topps cards in Yankee Stadium it was actually a relief.
4. Full names on the back. Toby Harrah is Colbert Dale Harrah.
5. Multiple cards of star players. Reggie Jackson, I believe, has 74 cards in this set.
6. Miscut cards, diamond cut cards, ragged edges.
7. Blurry photos.
8. The card backs are PINK!

None of the above seems very complimentary. But that just makes me want to collect it even more.

As with any set that comes from my first collecting period (1974-83), these cards were a delight. The set is filled with my most favorite players and my most hated villains.

But don't listen to me, see for yourself: 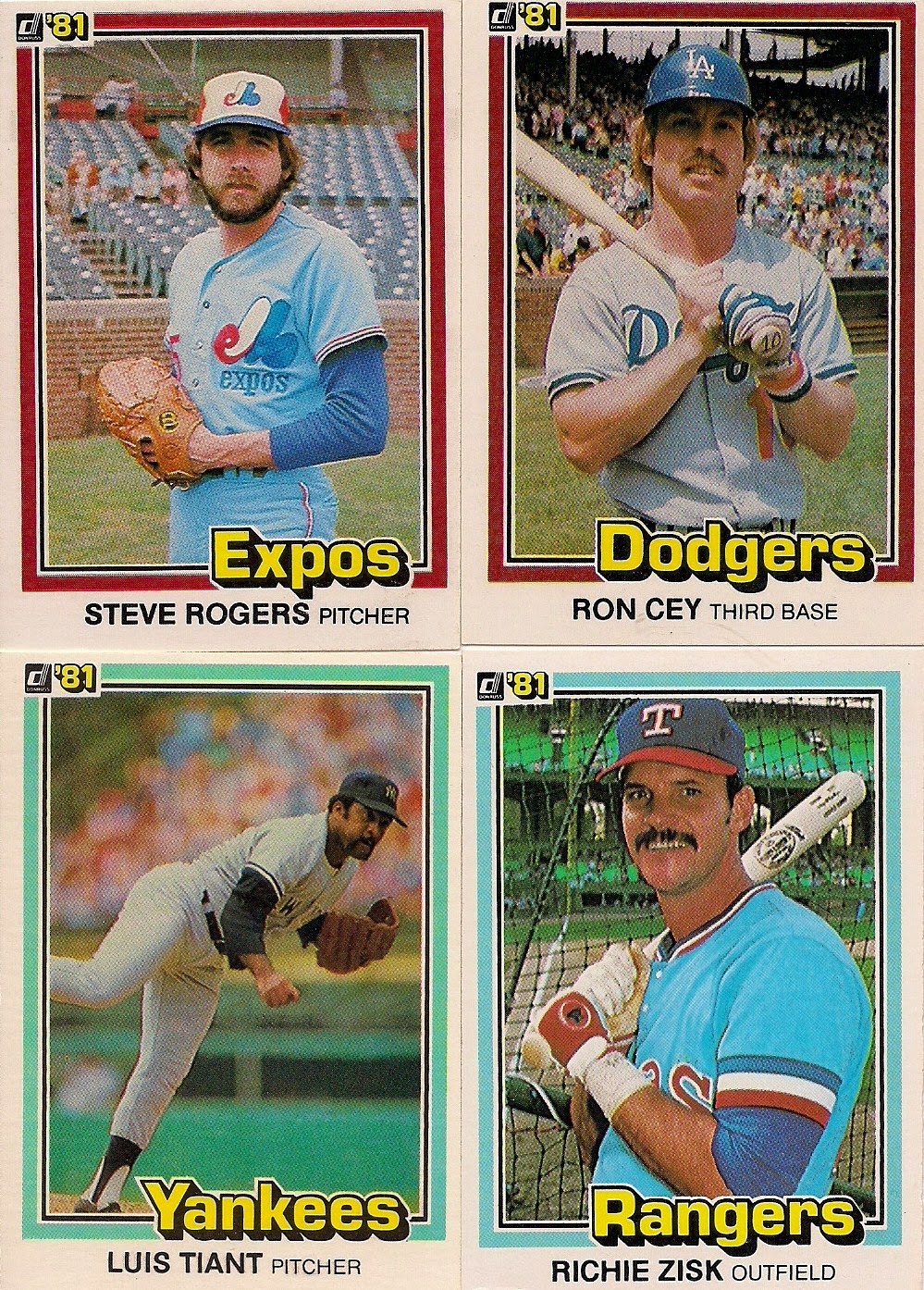 Look at that. Clockwise from top right, that is my all-time favorite player, a childhood favorite who I later interviewed, a comical figure from my youth who made hot dog commercials, and the guy who gave up Rick Monday's dramatic home run.

We're off that an excellent start. 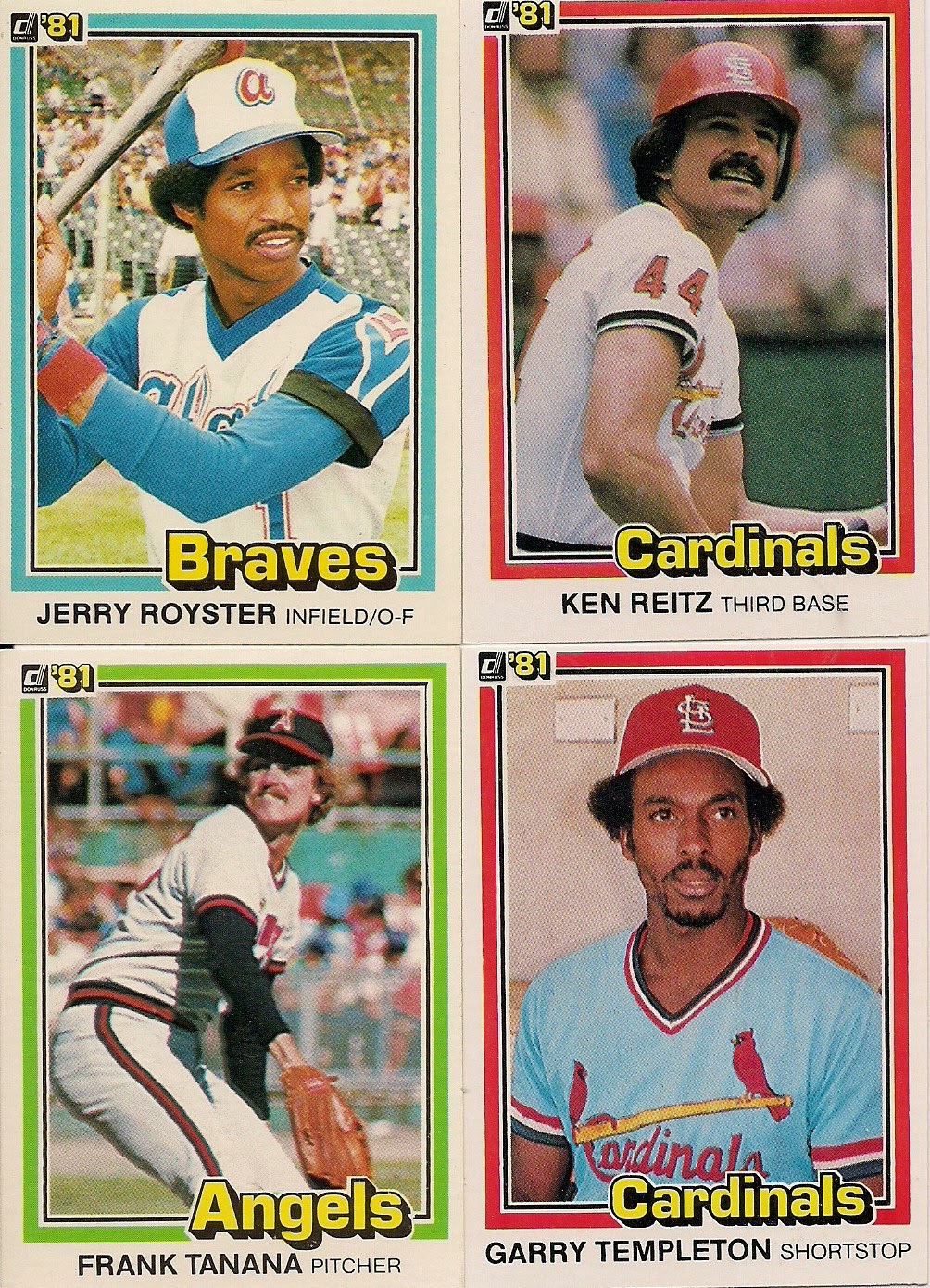 Here are four more favorites from when I was a wee one. But I can't explain why as succinctly as I did above. 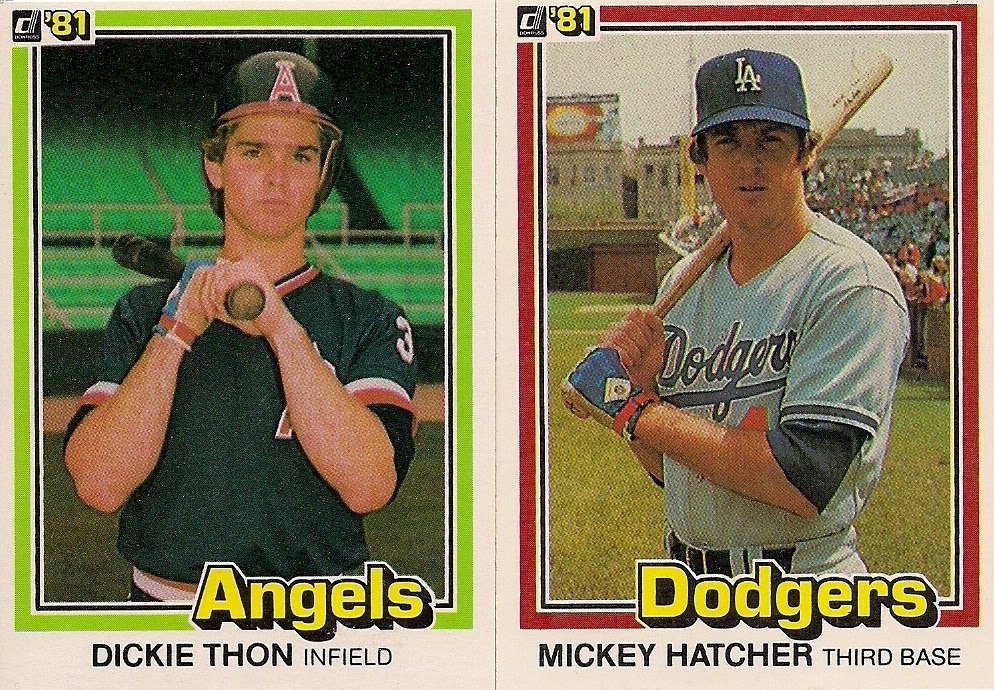 Another trait of 1981 Donruss is how many players are pictured with a bat on their shoulder. When I have the whole set, I will add up the grand total. My guesstimate at this time is 785 cards. 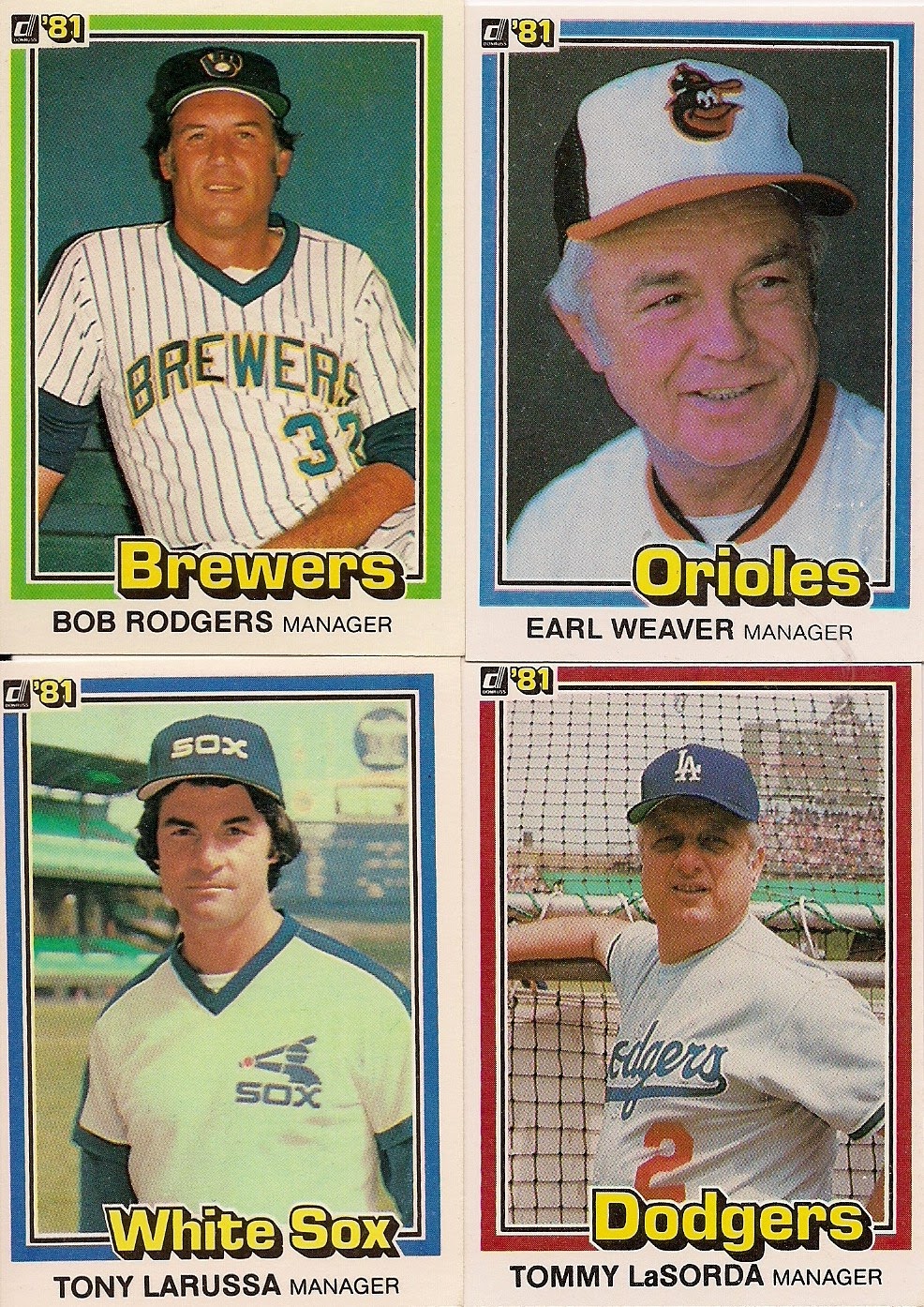 Managers! We appreciated both Donruss and Fleer for this, because manager cards were not a guarantee back in the late '70s/early '80s. I think both upstart companies got Topps off its ass in this regard.

By the way, look at youthful Tony LaRussa, plotting the devious ways he's going to ruin the game. 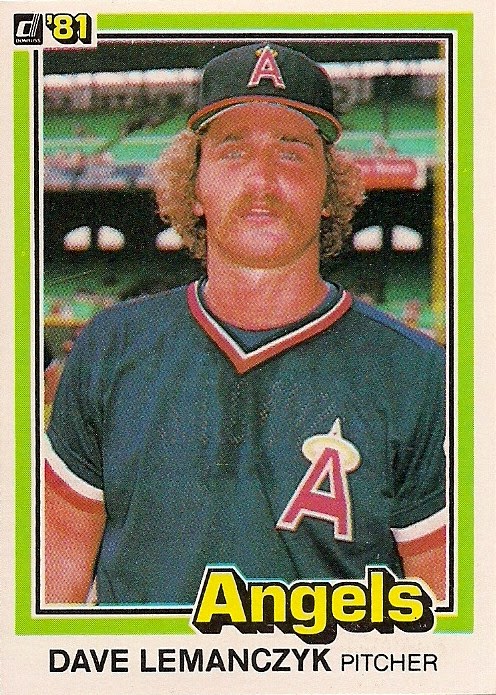 This card alone would make me collect an entire set. I don't know what state Dave Lemanczyk was in when this photo was taken, but if you told me he was up the previous night doing lines, I couldn't argue with you. Sorry, Dave if it was merely a bout with insomnia. 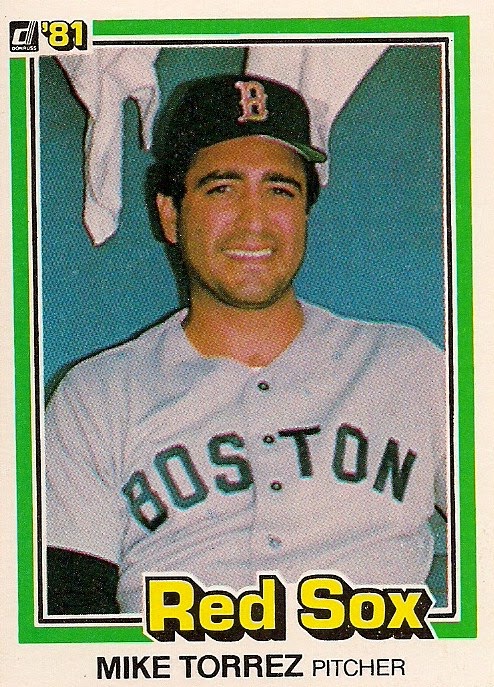 Please. For the love of God. Look out for the towels. 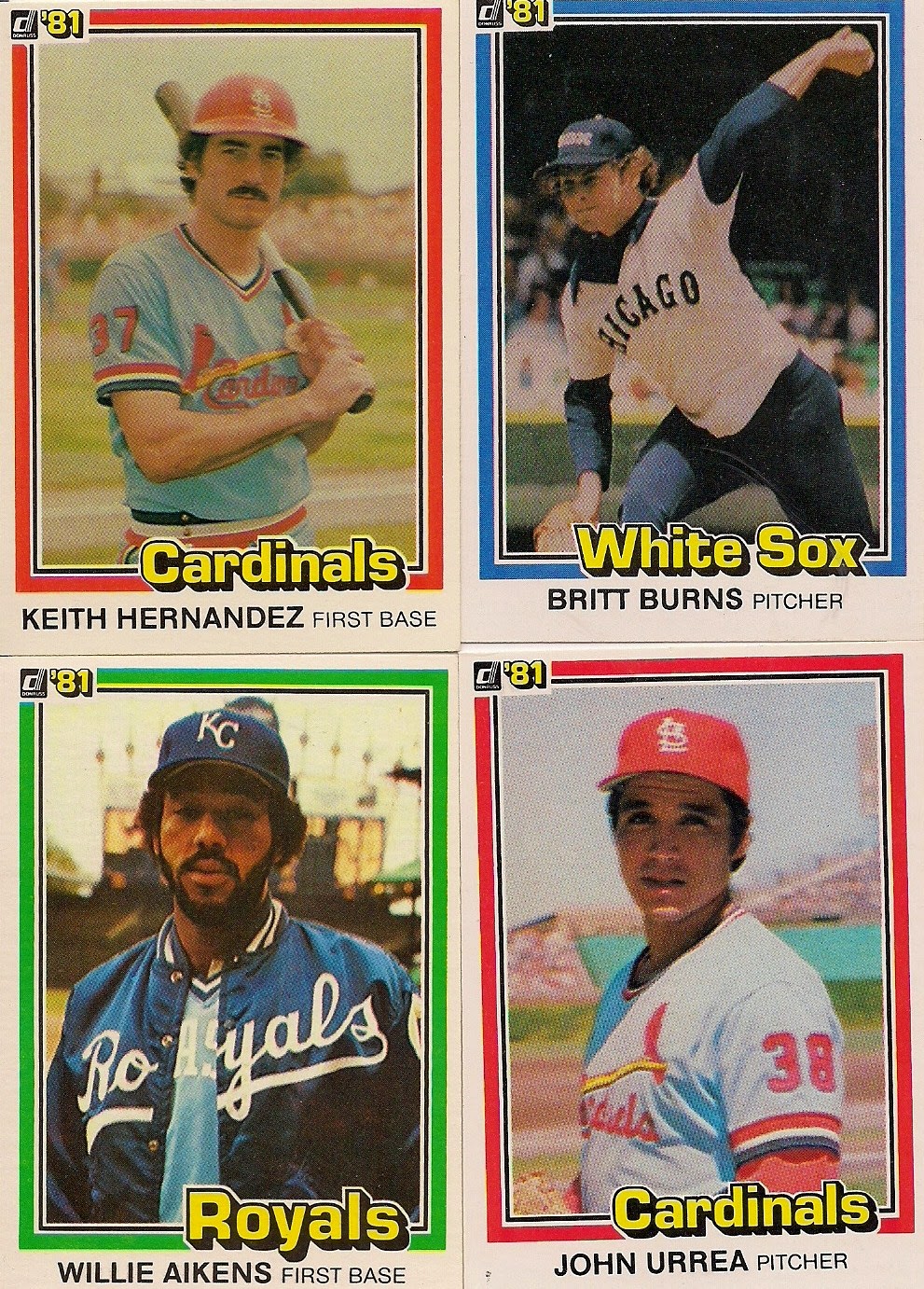 There are a number of photos in this set that look like they were taken by my grandmother. It's difficult to notice the blurriness on the scans, but, trust me, these photos would have been rejected by the DMV. The Cardinals, in particular, were treated very poorly in this set. 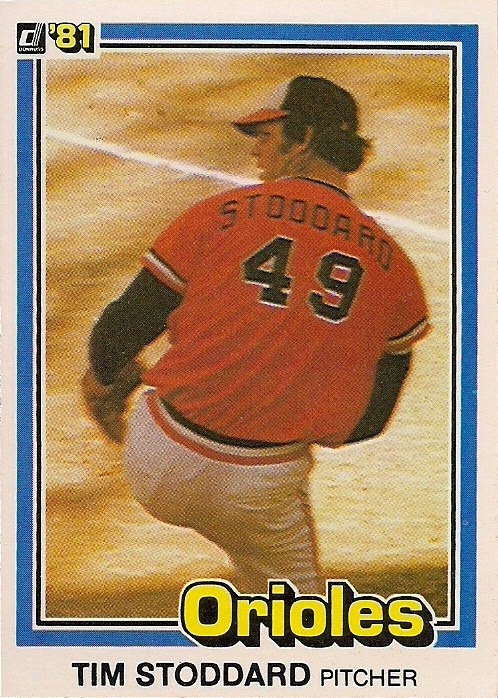 And this card photo looks like it was taken from Earth while Stoddard was on the moon, in black-and-white and then colorized. 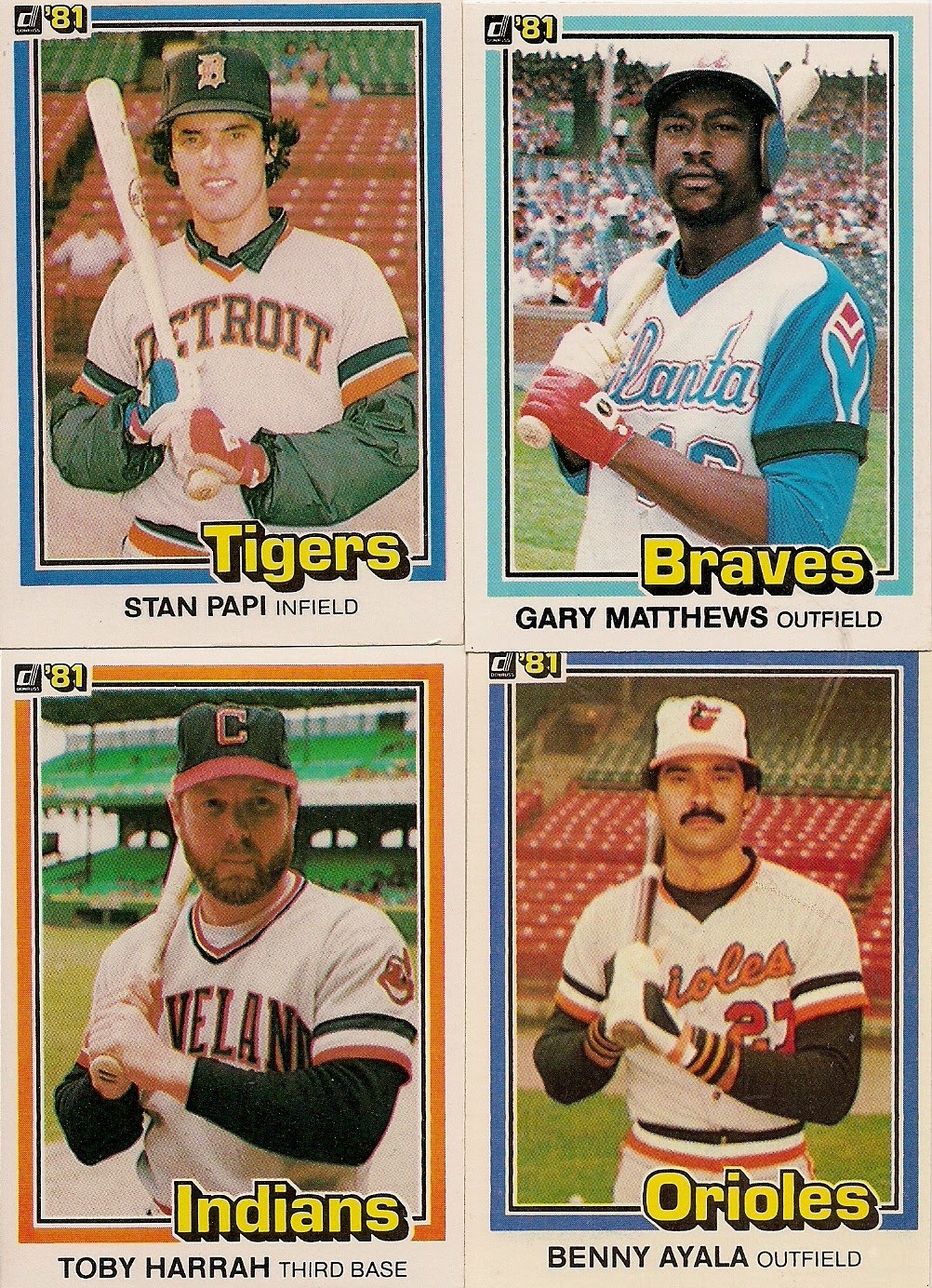 More bats on the shoulder. From Stan, Gary, Benigno and Colbert. 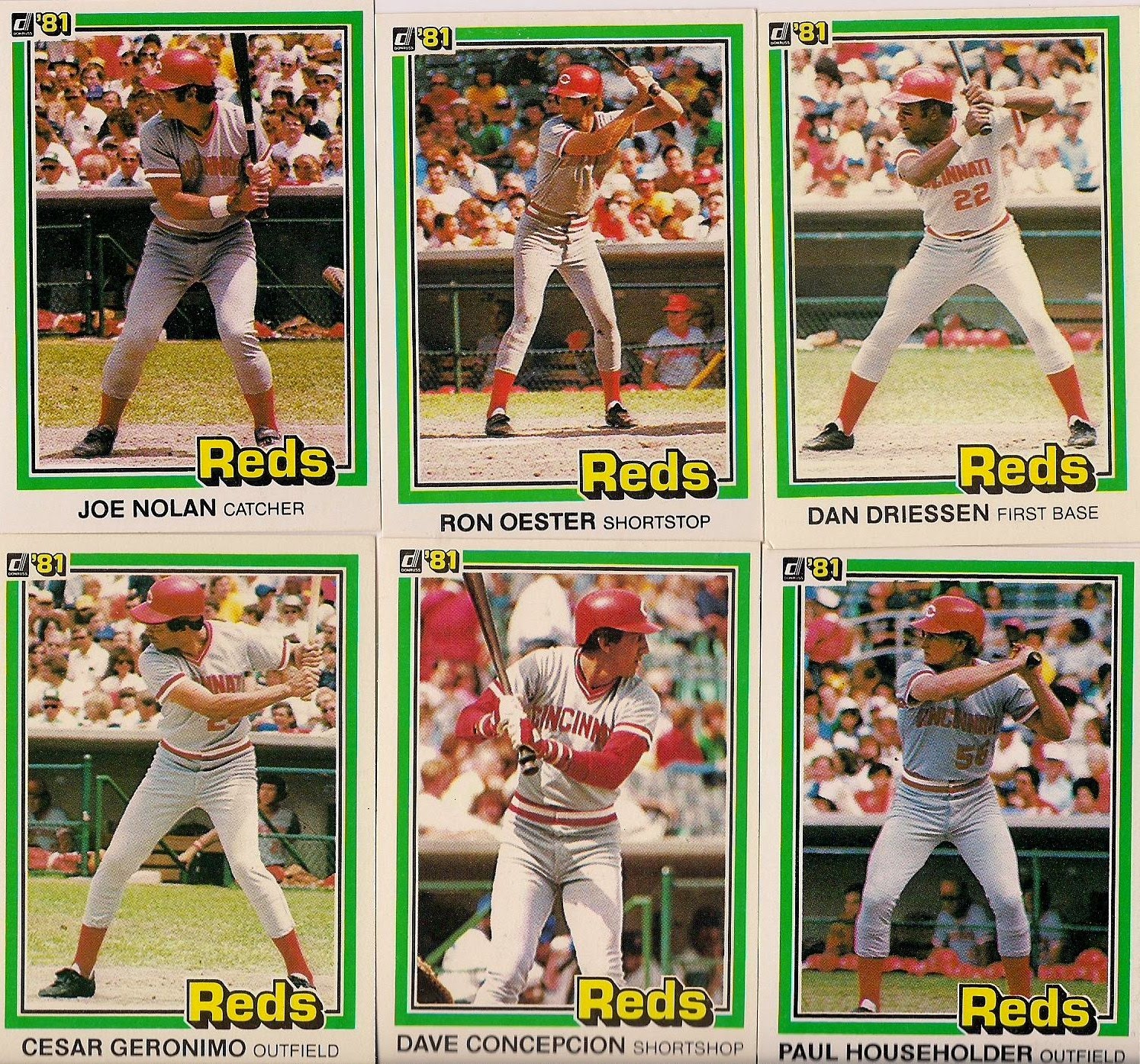 The Reds look very good in this set. Sure, the photos are similar, but with all of the posed shots in '81 Donruss, it was great to see some action. 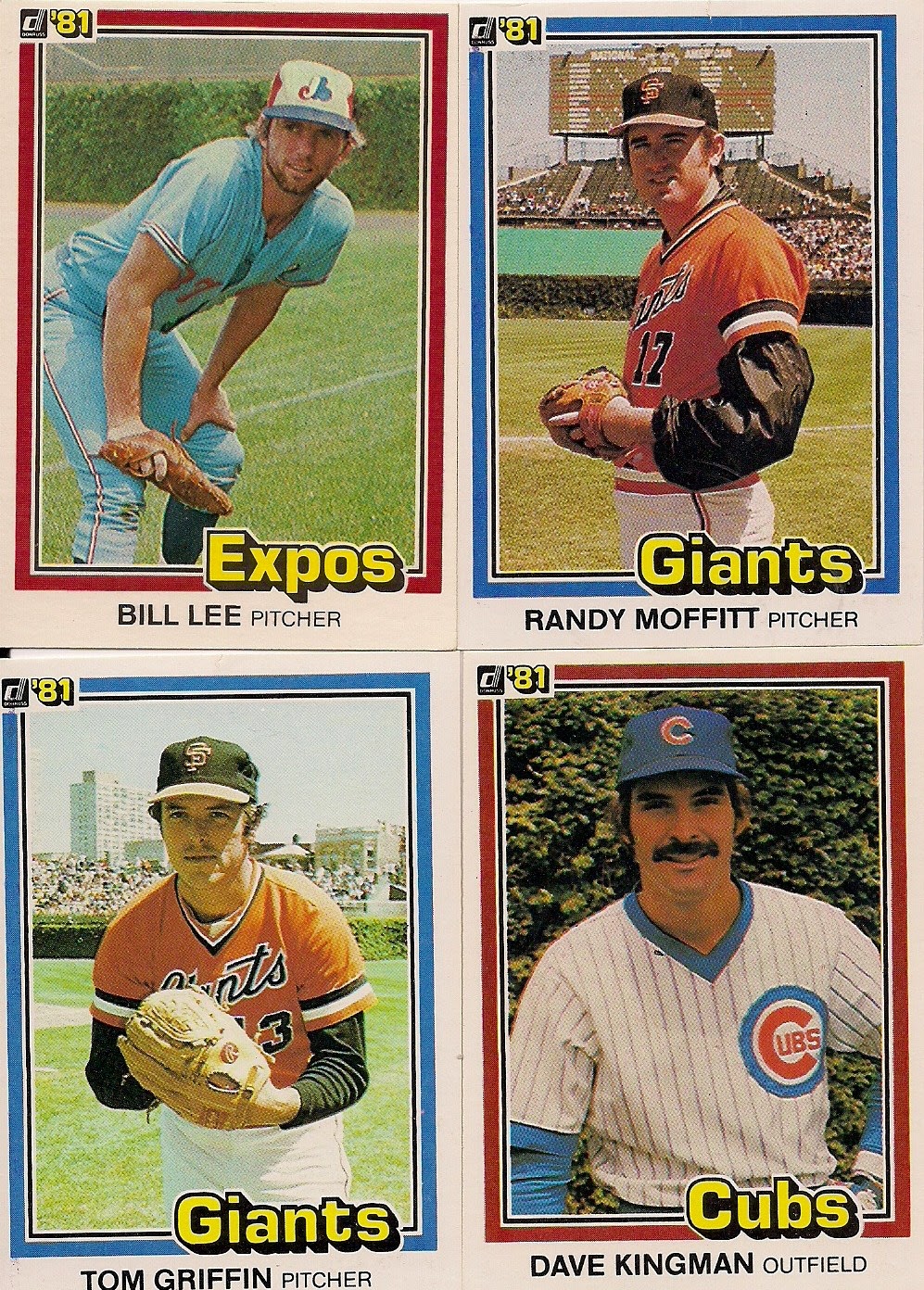 Almost every aspect of Wrigley Field is featured in this set, too. I feel like I toured the stadium after looking at these cards. 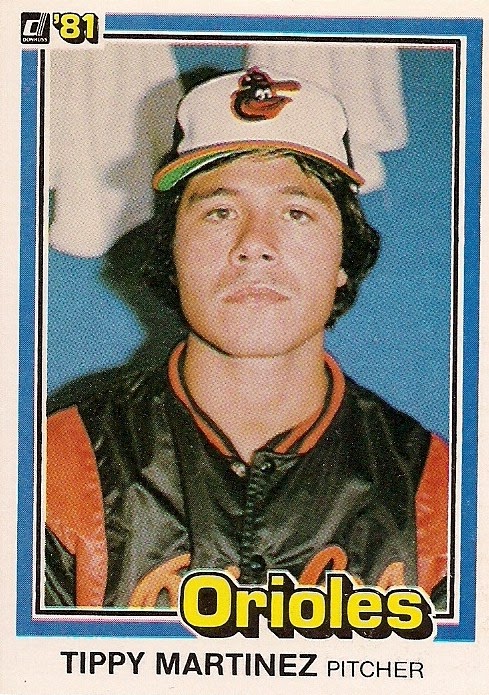 THE TOWELS ARE GETTING CLOSER!!!!! 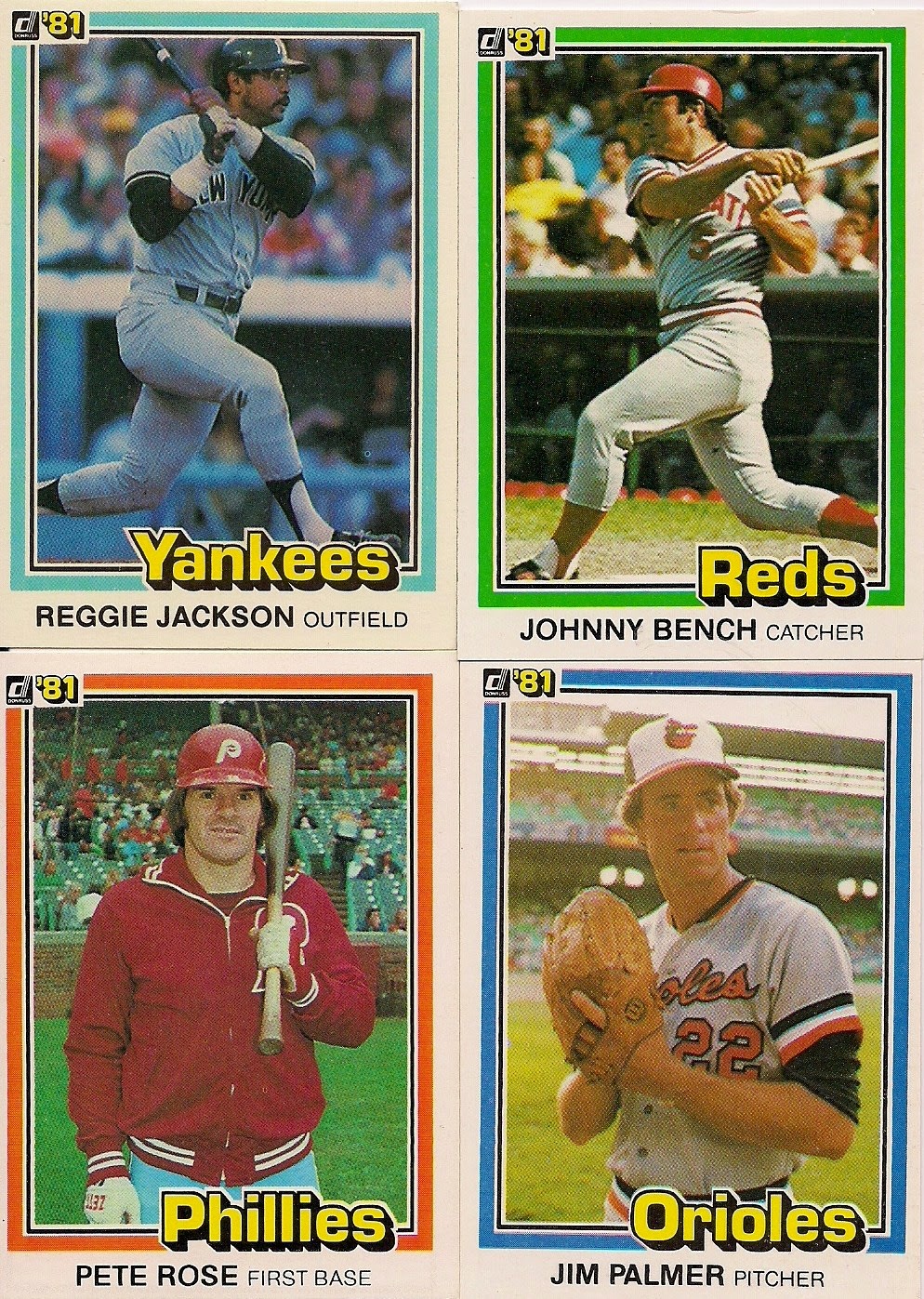 I don't fawn over star players anymore, but at this time I did. Bench was the only guy of these four that I didn't have an issue with, but I guarantee I would have stammered if I had to talk to any one of them at that time. 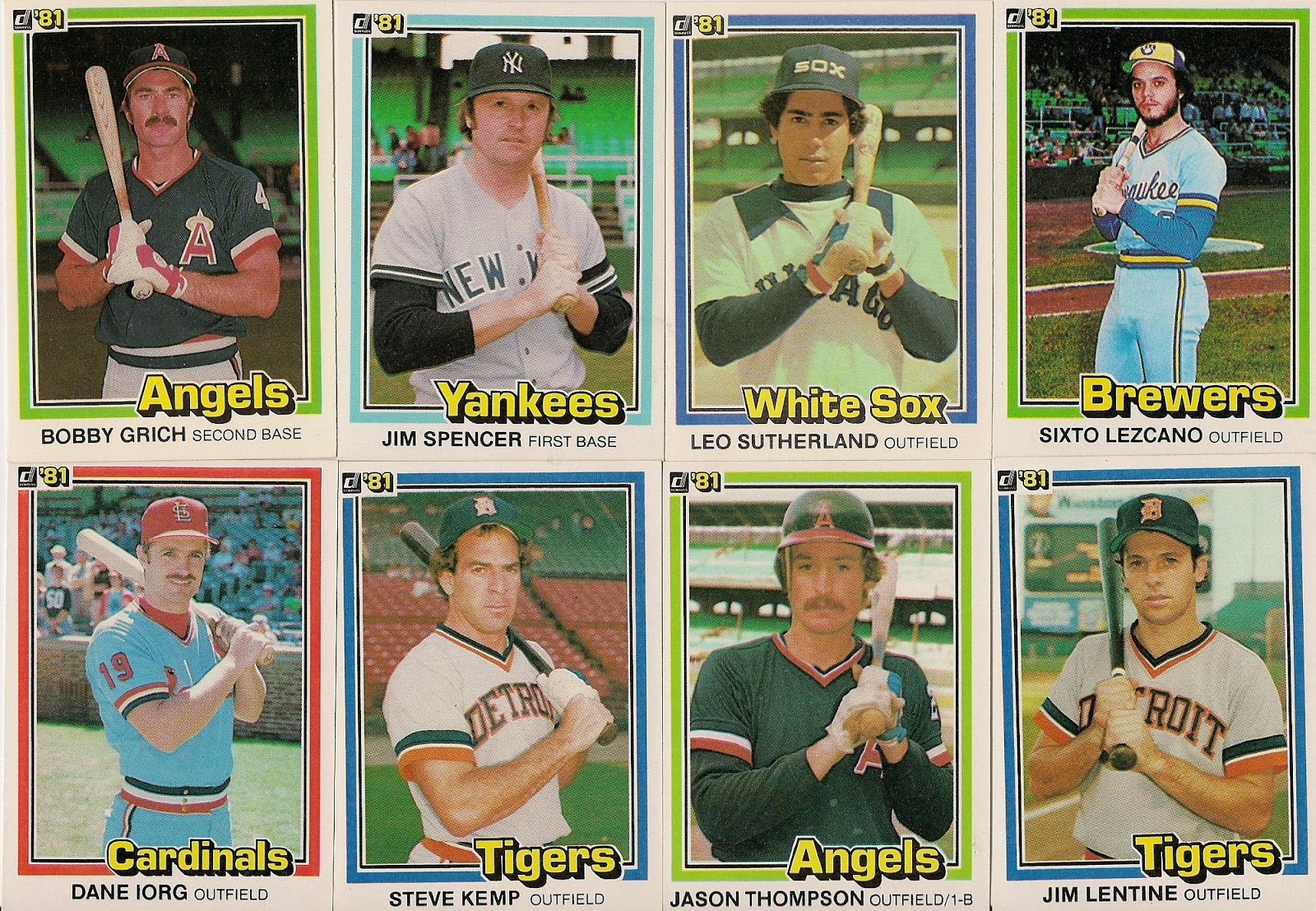 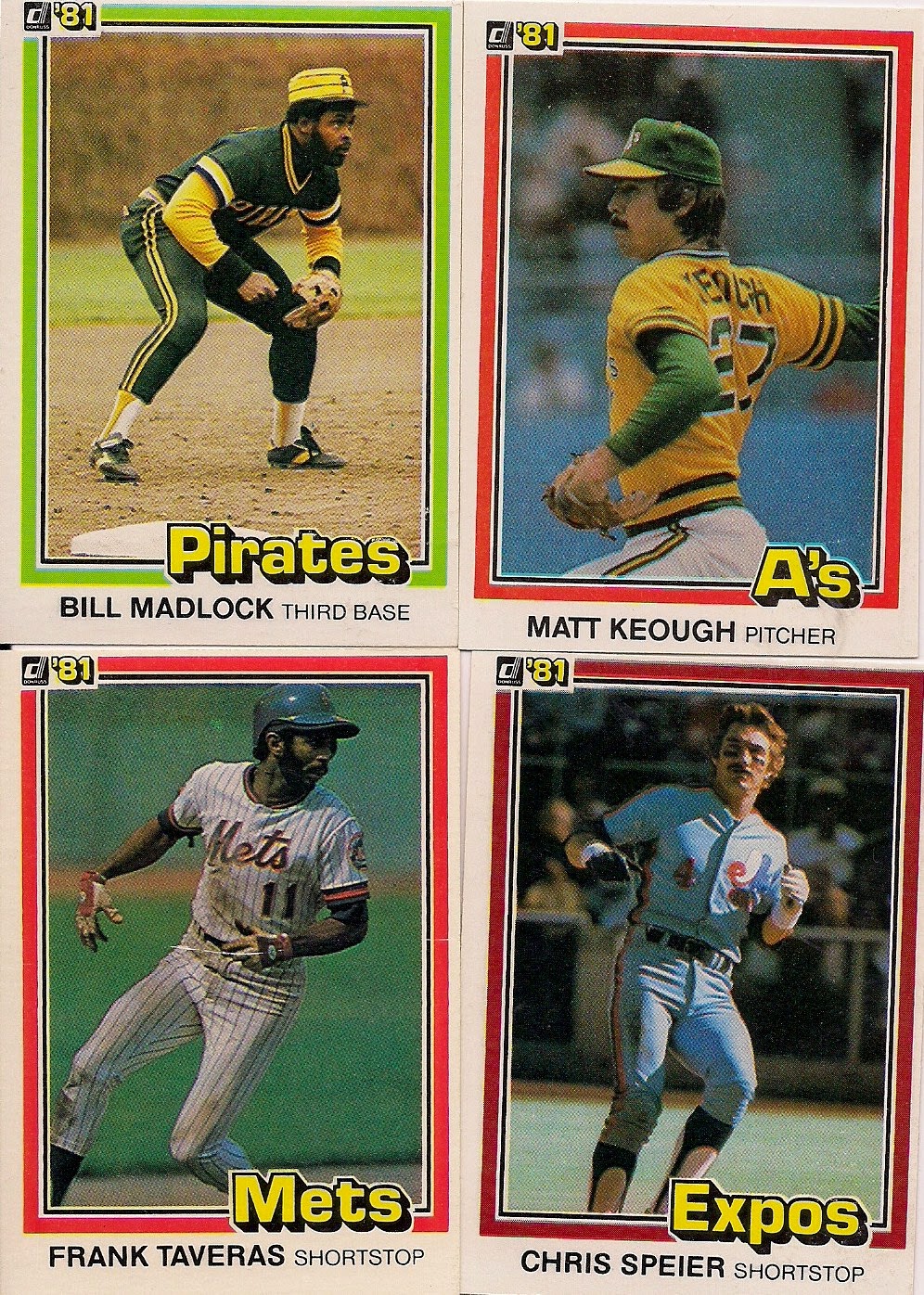 This is what passed for action back then. It's not all that bad, although I didn't grow up in an era spoiled by Upper Deck and Stadium Club. I particularly like the Madlock card. Very cool. 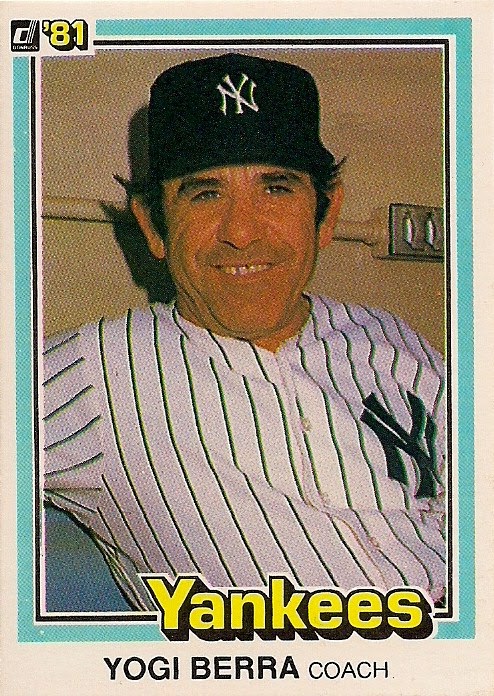 I didn't like the Yankees AT ALL then, but I'm glad Berra got a card. 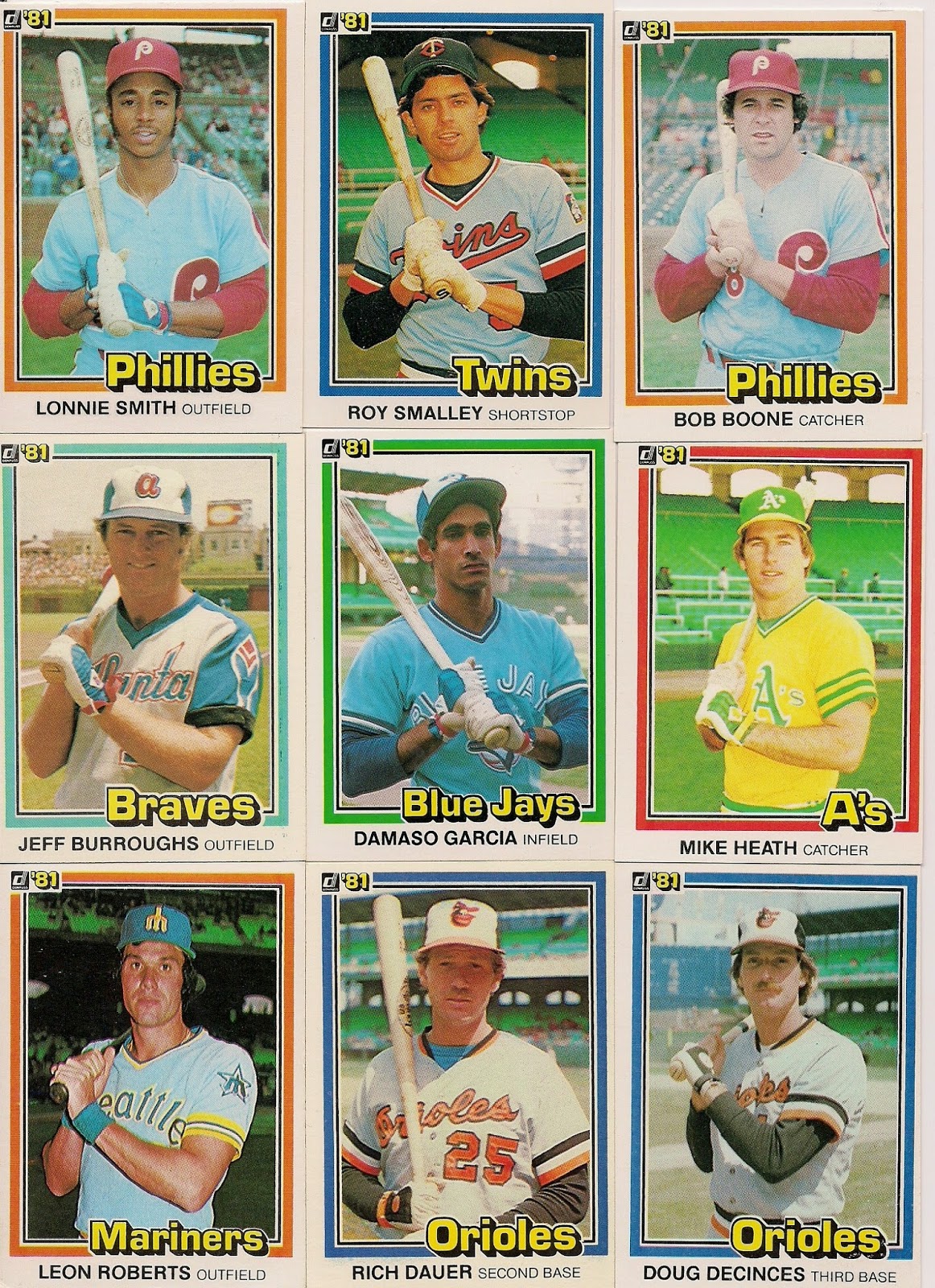 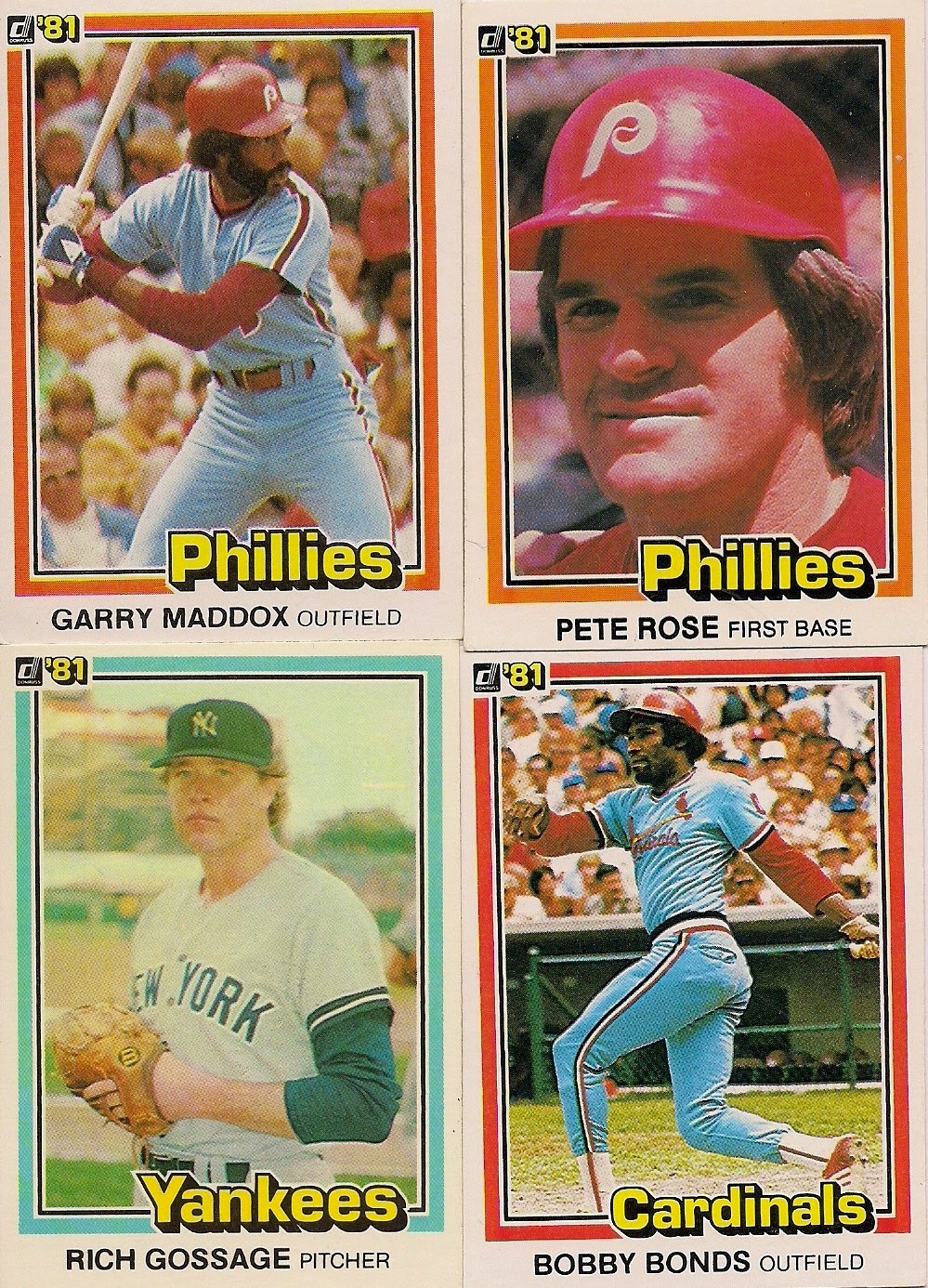 I'm really coming to my senses on '81 Donruss.

The card stock may have been thin, the photos blurry, the cards crooked and the poses unimaginative, but it's really a riot collecting this set.

Anything from this time period are the best cards I will ever know.

Even if 1981 Donruss is the Who of the card world.

Nachos Grande said…
A set that treated the Reds as winners and the Cardinals poorly? Consider me sold!
January 28, 2015 at 8:19 PM

BobWalkthePlank said…
Stan Papi looks like he is wearing a garbage bag under his uniform.
January 29, 2015 at 8:05 AM

Anonymous said…
Hmmm... "Virtually all of the photos were taken in Chicago" + "The Cardinals, in particular, were treated very poorly in this set". I smell a Cubs fan behind the camera.
January 29, 2015 at 9:06 AM

GCA said…
I have a wantlist website and any other lists I use are meticulously formatted and electronically enhanced, but I still have and use the same third generation xerox copied written list of the 1981 Donruss variations that I started with when they were new. It's the set that kinda started the variation collecting bug for me.
January 29, 2015 at 12:28 PM

Kevin Papoy said…
There are as many bat on the shoulder poses as empty seats in the stands
January 29, 2015 at 1:54 PM

Anonymous said…
During my purging process, I've occasionally turned my attention to 1981 Donruss. "Rational Joe" says that Donruss spent 10 minutes whipping up the card design, the photos are often weak, the card stock even weaker... But "Emotional Attachment Joe" says "Sure it's crap... but it's fun crap!" If anything, I've added more 81D to my collection since the purging started.
February 1, 2015 at 12:47 AM

Anonymous said…
...And I forgot to mention that, as someone who was actively collecting when our options went from one set to three, it didn't matter what the sets were like... What was important is that they weren't Topps and that made them freaking AWESOME just because it's was someone else's take on what a baseball card should be.
February 1, 2015 at 12:50 AM