Blowing my cash on junk 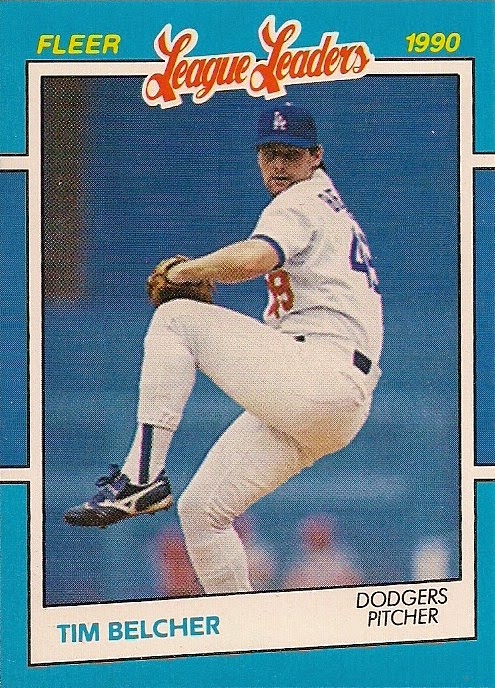 I have some Christmas cash waiting patiently for when I have some time to shop for cards. I do expect to find some rewarding vintage with this money, but I also know more than anything that I will positively spend some of it on junk.

I've mentioned this before, but it drives me crazy that I don't have all of the Dodgers cards from that junky era when cards were so ubiquitous that packs were issued with every newborn brought home from the hospital.

When a Dodger card from a nationally issued set from the late '80s or early '90s appears, I can tell instantly whether I own it or not. And it's like getting hit with a dart between the eyes when I realize it's a card I don't have.

Such was the case when Tom of The Angels, In Order posted every card from a box of 1990 Fleer League Leaders and said they were up for grabs. This was one of the 614 different box sets that Fleer issued during this period and as soon as that Tim Belcher card showed itself on that post it was like ...

But I was too late. Tom published the post during a Friday evening, which is the perfect time to post something if you don't want me to see it. I'm always occupied -- either in a good way or a bad way -- on a Friday night and stuff slips past me all the time.

So the card was claimed instantly -- who figured a Tim Belcher card would be the first to go? -- and another damn junk wax card that I should have owned two decades ago was roaming free across the plains again.

Then something glorious happened.

Out of nowhere, Tom said he had another Belcher card and that he'd send it off.

Getting that card in the mail was like -- well, there's no other way to describe it -- it was like getting a card that you've sort of wanted in a "well, I guess it completes a need" kind of way but then you've elevated the necessity of having the card to an obsessive degree so it looks like a 1952 Mantle in your hands and you announce to anyone who is in the house (in this case there was no one but the dog):

LADIES AND GENTLEMEN, I AM NOW GOING TO CROSS OFF CARD NO. 2 OF THE 1990 FLEER LEAGUE LEADERS SET. HOLD YOUR APPLAUSE UNTIL THE INK HAS DRIED.

That is what I hope to do repeatedly when I spend my Christmas cash on elusive Donruss, Fleer, Score and Topps sets from this period, focusing mostly on those pesky boxed or send-in cards.

Then, and only then, will I be able to sleep at night.

Matt said…
Reminds me of when I was a kid and needing Rodney Hampton Flair Preview card to finish up my set. Luckily a long distance truck driver, yep, a truck driver, who we wrote letters to from school, don't ask me why, knew of my need and stopped at a card shop and bought me the card. He showed up at my school and handed it to me. It was like Christmas!
January 8, 2015 at 8:56 PM

Matt said…
Speaking of Christmas, I too have some money left on eBay gift card, it's not much but its burning a hole in my pocket. Deciding what to pick up is the biggest problem
January 8, 2015 at 8:58 PM

arpsmith said…
I was thinking of trying to track all those pesky box set cards down for my Giants collection as well. I am not even sure my checklist is complete. I don't have it as a published 2015 goal but I may need to have a side goal as well, for some reason I cherish those cards as well.
January 9, 2015 at 10:56 AM