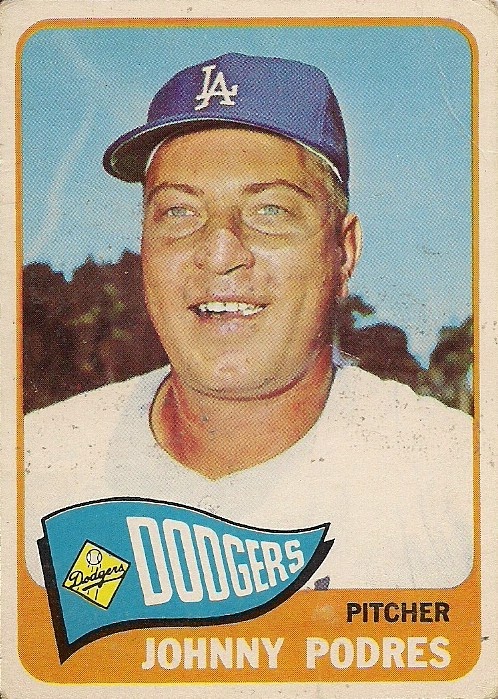 Last weekend I was at a card show. I picked up enough Dodgers from the 2014 Topps Heritage set that I almost have a complete team set.

Unfortunately, I fell a few cards short and there are still a couple that I need.

And just the other day, Dave K. sent me Johnny Podres here.

It was the last card I needed to finish off the team set from '65 Topps. 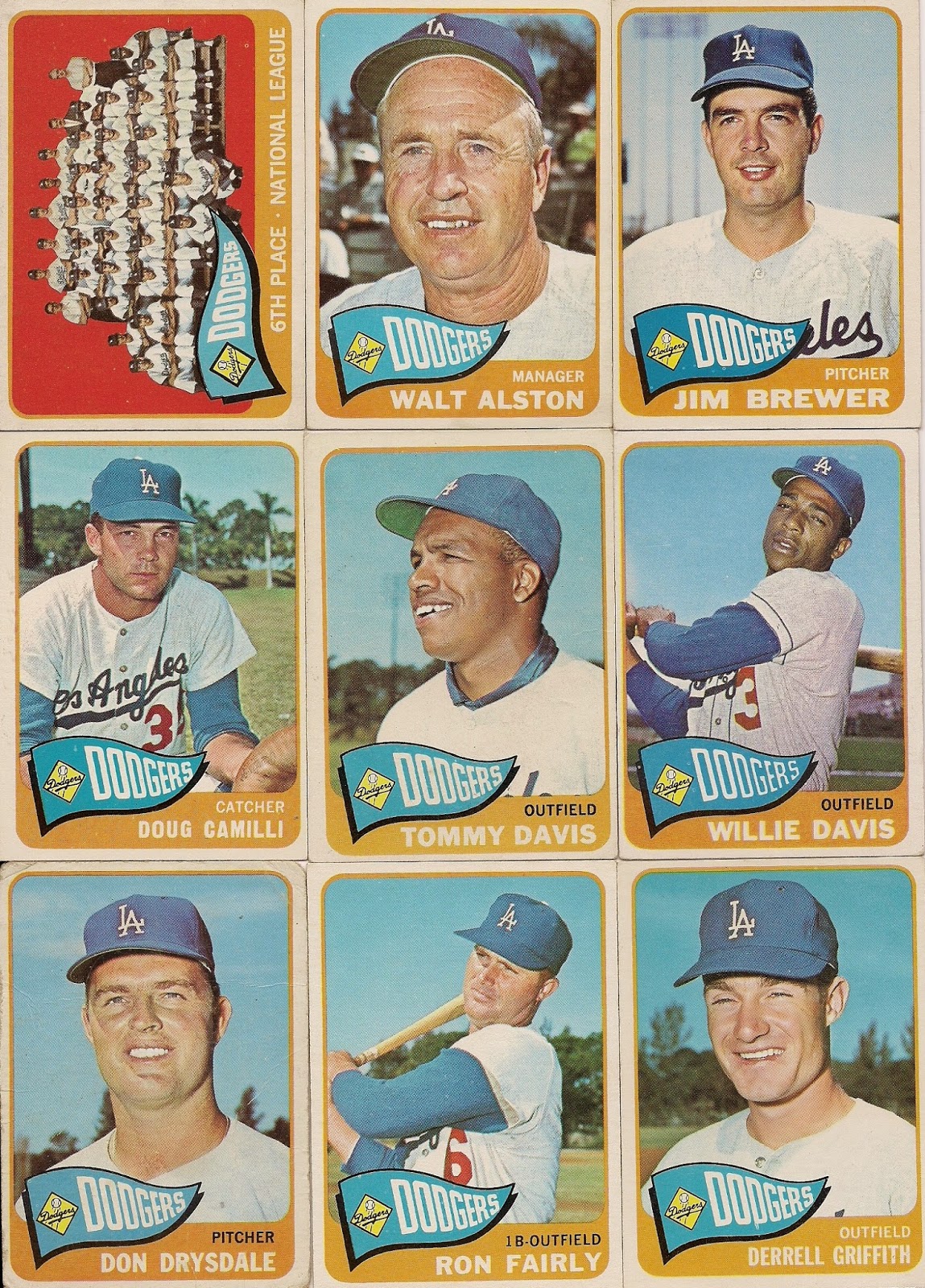 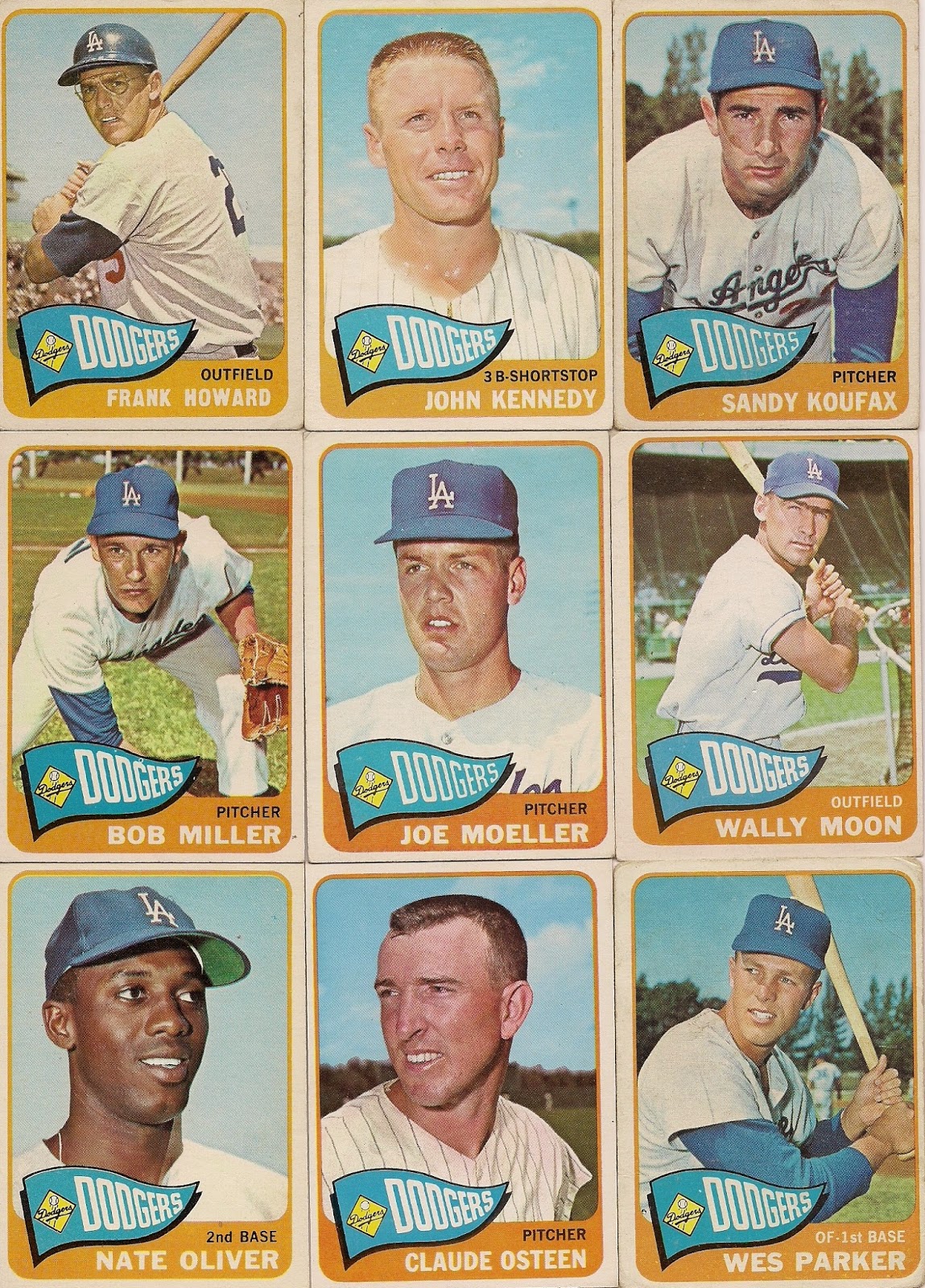 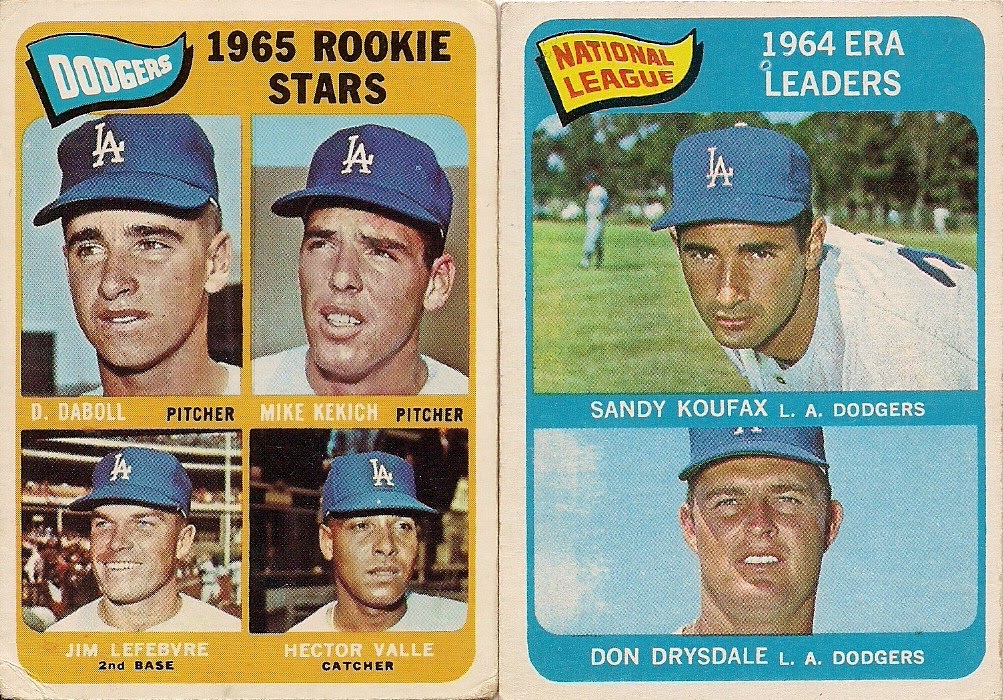 I suppose some would say the ERA Leaders card doesn't belong with the team set, but I and a number of others think it does. And since that's the case, I still need the strikeout leaders card from that set, in which Drysdale is in the bottom right corner of the card.

But basically I'm finished with the team set from '65.

This is terrific for so many reasons:

The card world is in harmony today.

I remember the first two Dodger cards from this set that I ever had. They were Frank Howard and Ron Perranoski. I still have those originals, obtained during the first time that I knew I could obtain vintage cards (I don't remember how I obtained them, but I know it was during my early high school years).

But today I am celebrating.

(P.S.: If you know the title reference, you know why it applies, you're as old as I am, and your taste in music may be as questionable as mine).

Jim from Downingtown said…
It's odd that 3B-SS John Kennedy is the only third baseman with a card. I would have thought that Jim Gilliam (or maybe even Ken McMullen) would be represented.
April 13, 2014 at 8:32 PM

Jim from Downingtown said…
I'm on the other side. If the pennant doesn't say "Dodgers", it's not a Dodgers card. To me, it's a "misc" card, like checklists, leaders, or late-series multi-team rookie stars cards (although I have been known to put those multi-team rookie cards in my Phillies binder if they contain a Phillie. I guess my reasoning is that there is so few of them, it's not really a subset unto itself, like the leaders, all-star, world series, or checklist cards.)

All my non-Phillies are in binders per year, and within a binder are grouped by team (yes, I know most everyone else arranges then numerically). All the "non-team" cards I described above are in the front, with each type having their own page(s).
April 13, 2014 at 8:39 PM

Jim from Downingtown said…
...because if you're collecting the whole set, and a leaders card has Dave McNally AND Jim Kaat on it, is it an Orioles card or a Twins card? Do you have duplicates, and put one with each team? I solve all these pressing questions bu putting them together in the front of the binder as "common" cards.
April 13, 2014 at 8:43 PM

Mark Hoyle said…
I too separate by team not number. As a Sox collector and set collector I would search out two leader cards. Many of my old 60's and 70's sets are still set up in the old four division lineup. Old habits are hard to break. For my 68 and 69 redsox sets I went as far as collecting all the allstar cards that had Yaz on the back as a puzzle. Also included is all the insert and test issues Topps put out.
April 13, 2014 at 9:07 PM

Mark Hoyle said…
Also in some of my Sox sets I would search out cards from other teams that had guys who ended up on the sox. Much like you display on your 67 topps blog. I only do that on pennant winning years.
April 13, 2014 at 9:10 PM

jacobmrley said…
Point of order: I would say that since both players on the League Leader card, in this case the ERA leader, is on said team, than it should be thought of as part of the teams set. The same would go for any Superstar Combo card or multi-player rookie prospect card. Since here, the Strikeout leader has players of many teams, then they are not vital to the team set, but could/should be for the psychotic completest.
April 13, 2014 at 9:51 PM

Anonymous said…
My equivalent song would be released in 2003, called "87 love affair" and thus I'd honor the Topps wood borders. Not sure who'd sing it. Maybe Kid Rock. He was starting into his country-ish ways by then.
April 14, 2014 at 12:41 AM

Fuji said…
When I built my 1972 Topps A's set, I included any card featuring an Athletic, because it felt incomplete without them. But I'm just one collector... with one preference. I understand that everyone has their own collecting style.
April 14, 2014 at 8:56 AM

arpsmith said…
Congrats, I agree that 65 is the best set of the 60s followed by 62 in my opinion. I collect all the Leaders cards in my Giants team sets, since the player and the team are noted it just seems right to me. I didn't know the Dodgers had a quad player Rookies card, that design looks pretty cool.
April 14, 2014 at 11:38 AM

Commishbob said…
Leader cards are part of a team set as far as I'm concerned. My Orioles team sets contain every card that has a player ID'd as an Oriole, leaders, mixed team/multi-player rookie cards, etc.

random things.....Topps chose a good color scheme for the Dodgers in '65. The yellow/gold/tan goes nicely with the blue.... the Koufax is a neat card, I need to upgrade mine some day, it's kinda rough..... the red background on the team card looks wrong in that grouping. I'd of used blue.... it would have been cool if Sweet Lou Johnson had gotten a card, he was a key player in '65, but I understand why he wasn't in the set coming off a couple of years in the minors.
April 14, 2014 at 12:35 PM

Jim from Downingtown said…
Yes, if you're collecting just a team set, I would agree with that. But if you're collecting the complete set for the year, it doesn't make sense (to me) to split up the leaders cards among the various teams, especially since almost all of the cards would have players from multiple teams.

Above, I mentioned that I keep my Phillies in their own binder, and in that binder also include late-series rookie start cards that have Phillies and other teams' players on them (like the '68 Larry Hisle or '69 Terry Harmon). So, for those rare instances, I'm going against my own above-stated position on "non-team-specific" cards. But I don't do that with the leaders cards, I guess since they come in a set of 12, so I keep them all together, whereas the multi-team rookie cards are few and far between from 1964-1972.
April 14, 2014 at 1:03 PM

Jim from Downingtown said…
Mark, what I also do (which sounds like you do also) is that for my Phillies binders only, I also include players with a card in that set labelled for their previous team if they played for the Phillies IN THAT SEASON. For example, in my 1967 Phillies section, I also have Turk Farrell (Astros), Gene Oliver (Braves), and Chuck Hiller (Mets) (but not the '67 Woodie Fryman card, since he didn't play for the Philllies until 1968).

Then, over in my 1967 binder, in (for example) the Astros section, I either have a duplicate Turk Farrell card, or a 2"x3" piece of paper with the player's name and a note that his card is in the Phillies binder.

Commishbob said…
I'm with you on the set collector concept, Jim. All leader cards would be part of the overall set. I guess I should have been clearer.
April 14, 2014 at 8:43 PM