April 03, 2014
(It's past 8 p.m. in my part of the world, and that means your time is up to enter the 400 followers contest. Thanks all who entered. I hope to have a winner determined on the weekend. But I'm afraid the surprise package won't go out until much later. You'll just have to bide your time with my blog posts. Time for Cardboard Appreciation. This is the 202nd in a series): 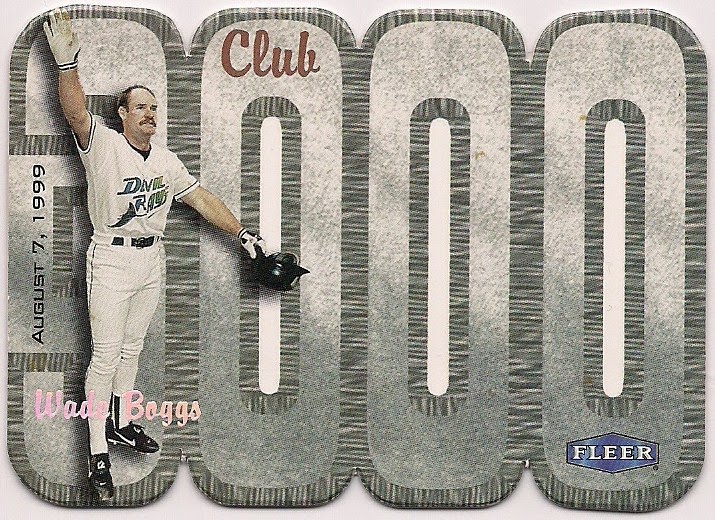 I'm not sure if this happens to you, but as a traditional team and set collector it happens to me a lot.

Since I limit my collection to Dodgers and to what I consider genuine 500-card-plus SETS -- not piddly little insert wallet-robbers -- there are cards that I just don't see in my collection.

Most of the time, it doesn't bother me. So many insert sets, so little time. I can't be bothered. But every once in awhile I see something great, look to see if there's a Dodger in the set so I can grab one, and am disappointed.

With Fleer's Club 3000 set, issued in 2000, I didn't even bother looking because I knew already that the Dodgers have never featured a player with 3,000 hits or 3,000 strikeouts (they didn't even pick one up the cheapie way, like Tampa Bay here).

But, good gosh, did I want one of these things.

Or so I thought.

Of course, I had to go and spoil it by trying to determine exactly which larger set featured the insert. I should have known: this is turn-of-the-century Fleer. Where confusion reigned.

I grabbed my Standard Catalog of Baseball Cards, which has almost everything, and flipped to 2000 Fleer. There, I discovered that the 3,000 Club insert set was inserted into various different Fleer issues. Stam Musial, Steve Carlton, Paul Molitor are in Fleer Focus. Bob Gibson, Dave Winfield, Cal Ripken are in Fleer Mystique. There are memorabilia Club 3000 sets to complete, too.

It wasn't until I looked it up on baseballcardpedia that I realized that the Boggs insert was included in Ultra that year.

Of course, "Ultra." The set that was so special that it is listed separate from the other Fleer sets even though Fleer produced it.

I shuffled to the back of the SCOBC and there was the Boggs card.

Well, that was 15 minutes out of my day that I didn't plan.

Still a great card. Well worth having. But now you know why I usually steer away from completing anything cardboard that doesn't come in 500-count quantities or in Dodger blue.

Unknown said…
I have the Tony Gwynn that I picked up in a repack. Nice thick card that shows a great moment in the players career. It would be nice to see a whole set of these in one place.
April 3, 2014 at 9:17 PM

BASEBALL DAD said…
Those were pretty cool. I have a couple in my sample collection.

The one night I don't turn my computer on, you have a great contest !!

Unknown said…
Yeah I just featured my Robin Yount 3000 card on my Yount blog not too long ago. His card was in Fleer Tradition with George Brett and Rod Carew. A really neat set. Those relics are a bitch to find and they still go for a pretty penny.
April 3, 2014 at 11:46 PM

BobWalkthePlank said…
I think I may have the Gwynn buried somewhere. Fun insert set.
April 4, 2014 at 8:16 AM

cynicalbuddha said…
LOL I guess I forgot to log my wife out before I posted. hahahahahha
April 4, 2014 at 12:50 PM