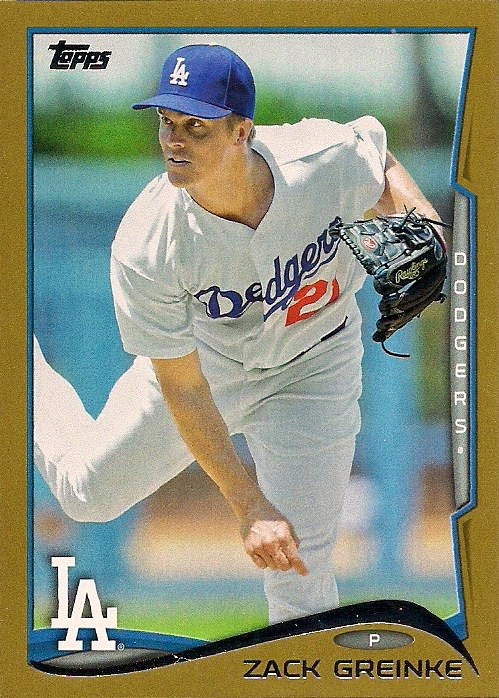 I have zero room for any additional card packages and when that happens, I have to clear things out. Comments be damned.

So settle down and load up for a combined trade post. Bring your finest meats and cheeses and a bottle of ale. You're going to see some cool cards from a variety of people. 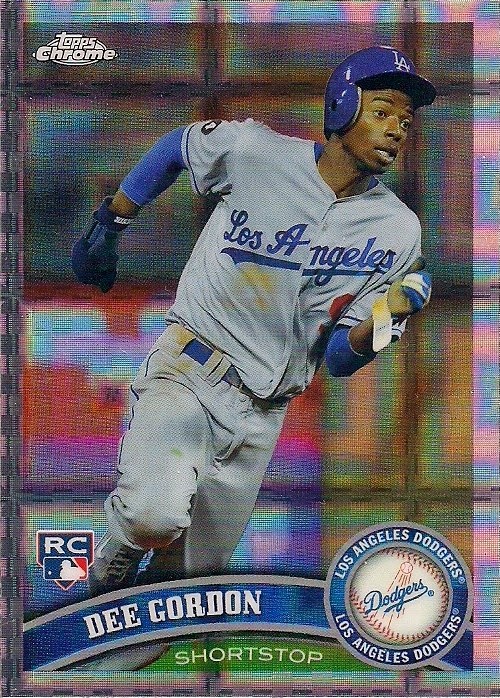 Here are some cards from reader Joe.

What would you say at this time last year if I told you that Dee Gordon might be the most productive position player on the Dodgers?

You would laugh derisively. It would be ugly. There would be insults back and forth. And we would not be on speaking terms. That's why I'm waiting until now to tell you this. 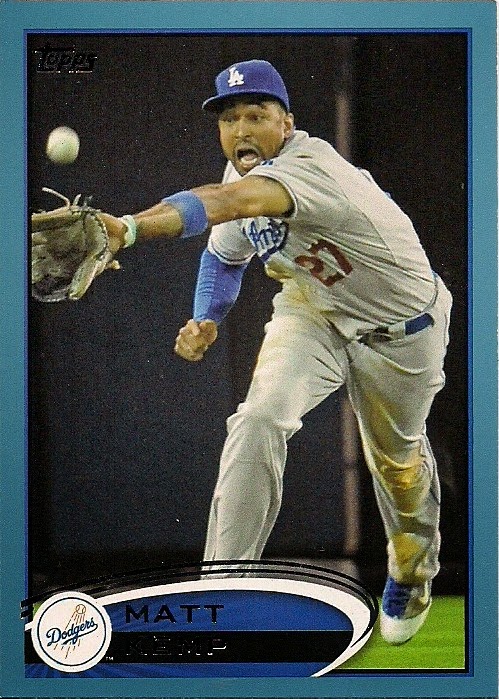 I was going to mention Kemp's slow start, but right now all that comes to mind about Kemp is the weird conversations that billionaire pro basketball owners have with their girlfriends. I guess when you're that rich, you have nothing to say anymore. 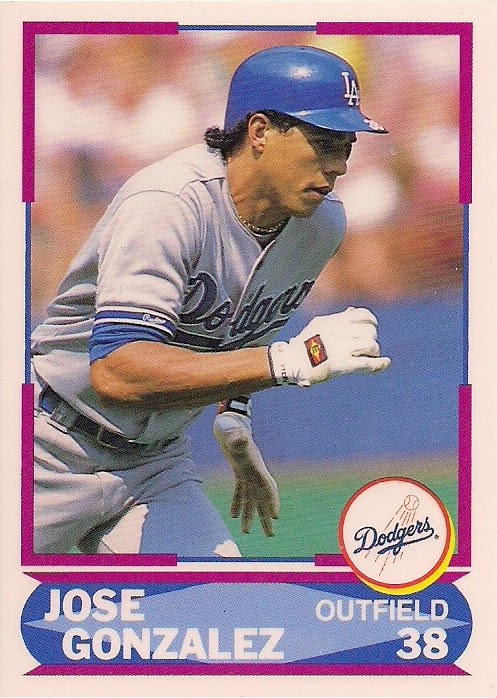 Yes, I needed this card. It's from 1990. I should shut this trade post down right now from embarrassment.

Thanks for the cards, Joe. 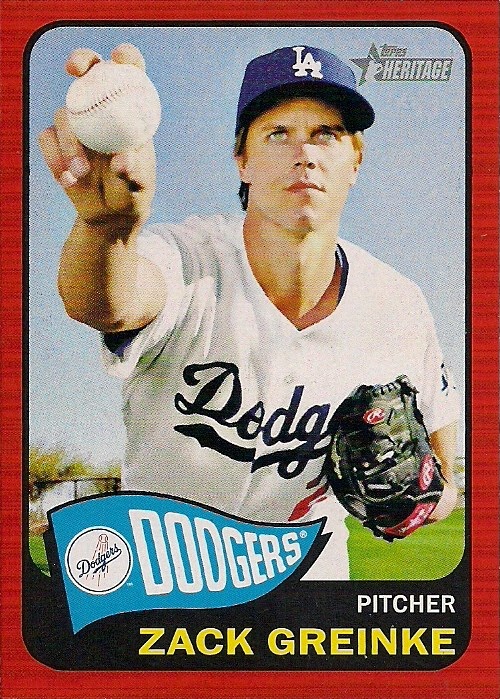 We're on to a PWE sent by Pat at Hot Corner Cards. It contained just two cards of the same person. 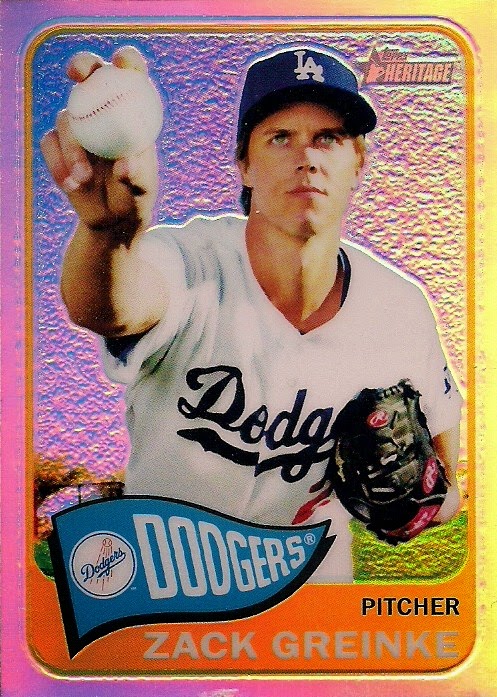 I am OK with this. I pulled the base Heritage Greinke and the purple Heritage Greinke out of the only Heritage blaster I've purchased. I happen to think this is the best Heritage card in the set. Which means the temptation to be stupid and pursue all of the other unknown parallels is very strong. Somebody hold me back. This next group of cards is from Tim Wallach supercollector Corey who apparently is so together that he prints out my blog name and my card interests (Dodgers) on his official company letterhead paper. You're lucky if you get a post-it note from me. 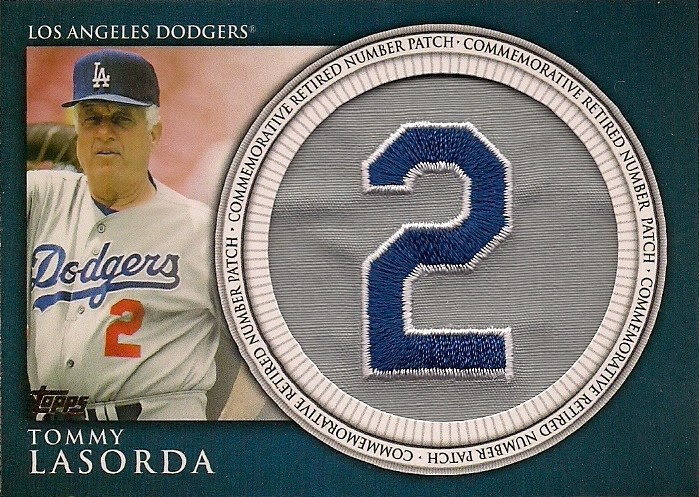 You wouldn't think that someone who collects every Tim Wallach would have a variety of other cards. But this was the most varied package that I have received in weeks. I love variety. I love Tommy Lasorda. I love both so much I'll gladly display this semi-card with a fake number patch (who stitches these things, by the way?). 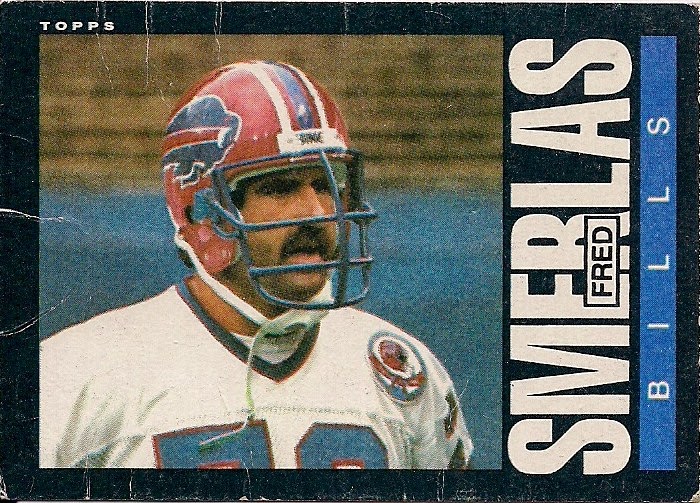 Variety. This is a card from one of my favorite Topps football designs of the first Buffalo Bill I ever interviewed (I was a little intimidated). Also the card is so handled that you don't notice right away the inevitable black-border chipping. 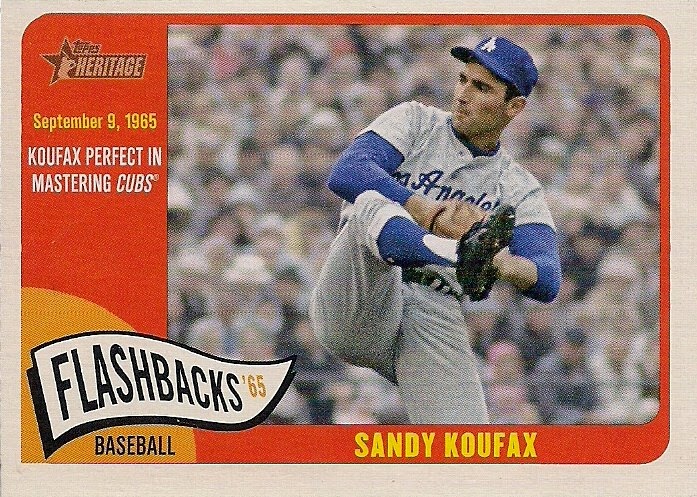 I'm sure an imperfect Koufax mastered the Cubs as well. 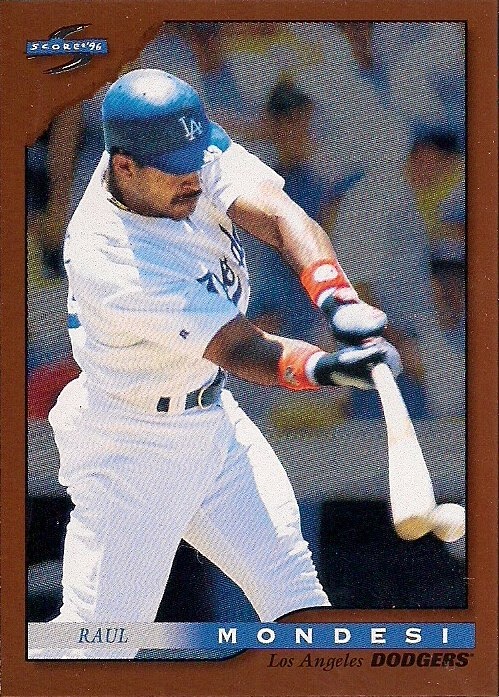 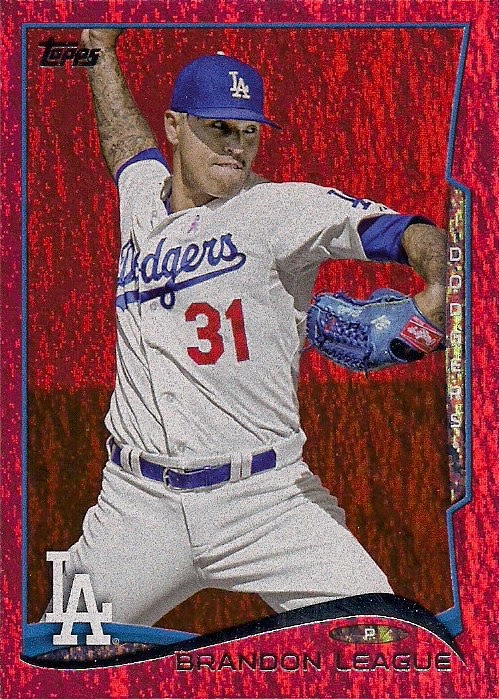 This is appropriate because I think it actually does rain blood when Brandon League pitches. It's the blood of Dodger fans who have to suffer through his contract. 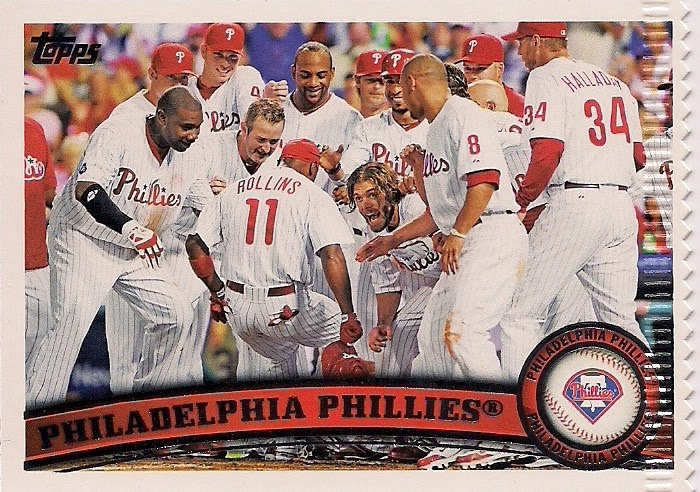 This card came through after an incident with the pack crimper. And that automatically enters it into my night card binder. 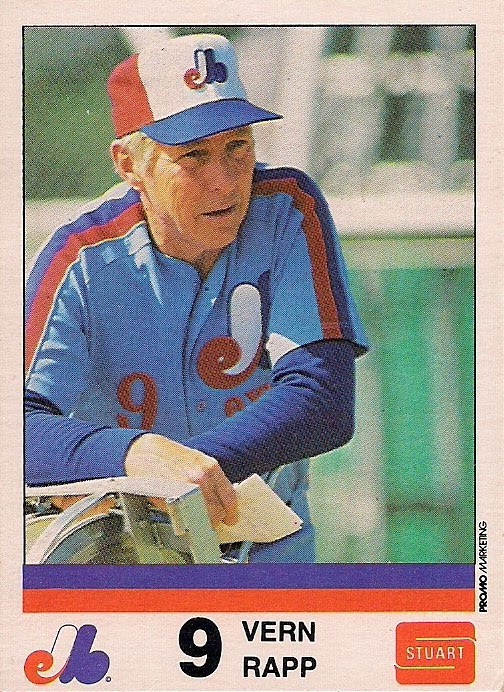 I saved the best card for last. It is a Canadian food issue card of Expos coach Vern Rapp with French on the back.

Did you see what I just wrote?

There are about a half dozen fantastic things there.

This needs to be on a plaque on the mantel. 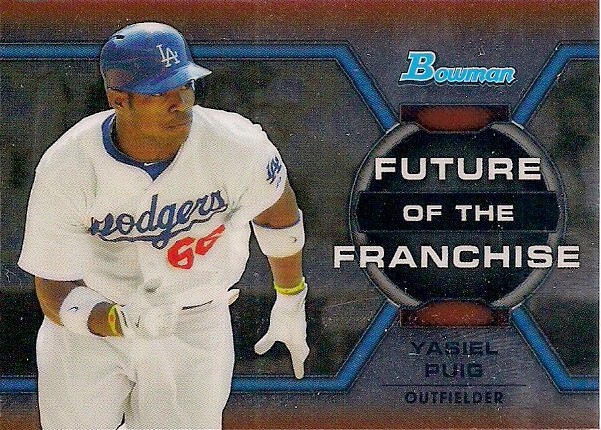 The last group of cards comes from Ethan at Playing With My Cards. He had this Bowman Chrome mini insert of last year's It Girl. Pretty cool.

He also had this, which is much cooler: 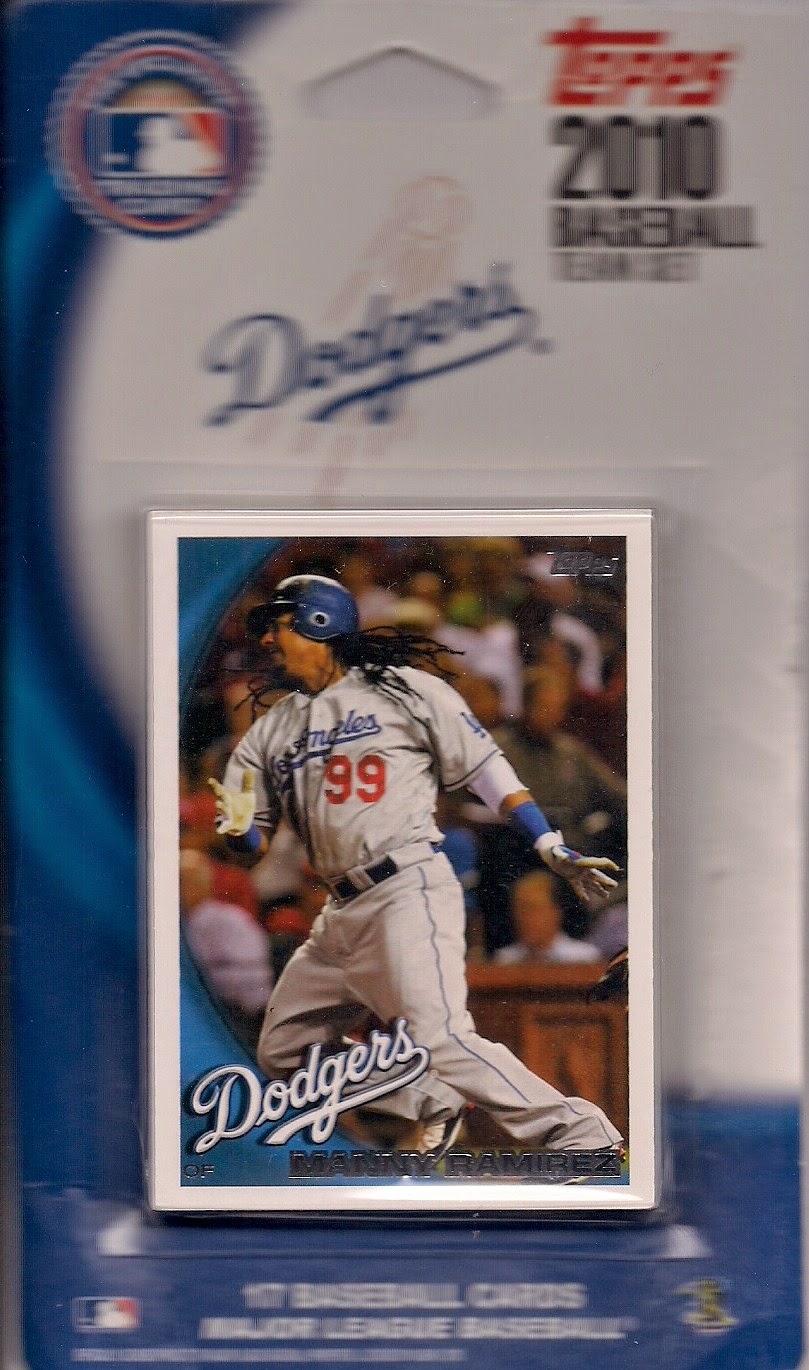 Oooh, I love these. Because although at least half of the set is a duplicate of the cards you saw in the 2010 set, a few others are not: 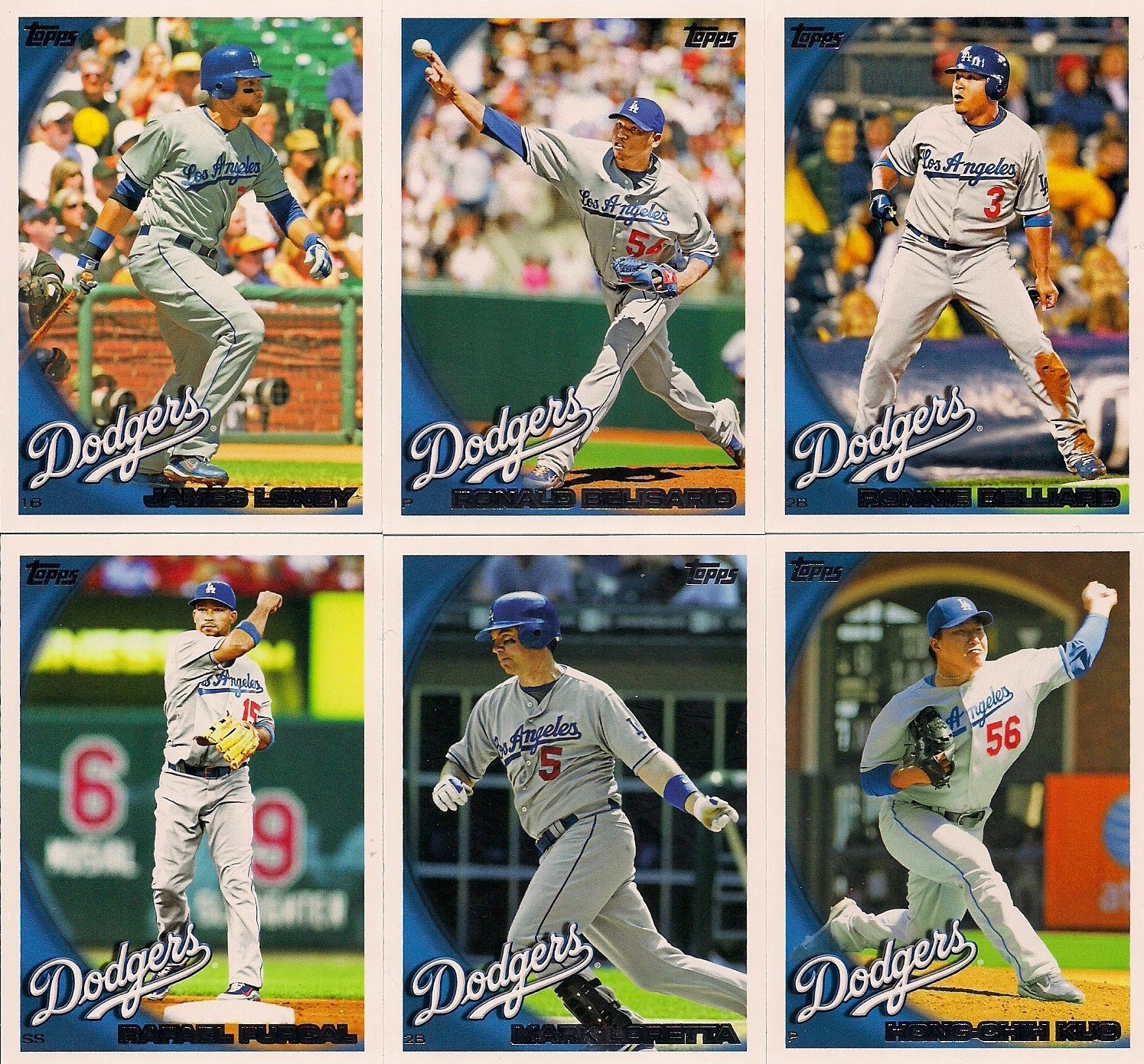 Also I don't know what Ethan is talking about: 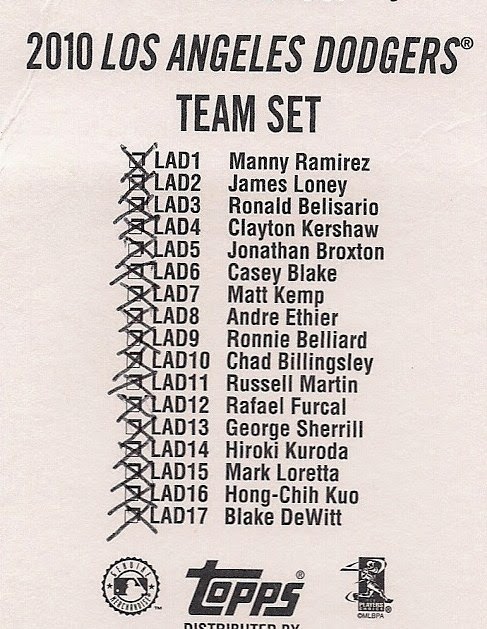 I found the checklist on the back very useful.

Thanks, Ethan for the cards.

And now it's time for anyone who wishes to comment.

Or not. Doesn't matter to me. I'll be over admiring my semi-clean desk.

Once a Cub said…
Look guys, the stars are just like us! Night Owl hears crickets on his posts, too!

I thought it was just me that didn't hear much on trade posts aside from the usual "You're Welcome" from the package sender. There will be a slew of "Nice cards!" or "Great pickups!" if they're from the internet or a card show though.

petethan said…
Oh, wait... you mean I have to write something other trade posts for people to read? Now I get it. Next step: get over scanner's block. (It's not the writing that kills me, it's the scanning.)

Glad I found something you could use, including the handy checklist on the team set. I mean, seriously... why is that there!? Quality control, just to make sure they packed 'em all?
April 29, 2014 at 10:42 PM

Play at the Plate said…
You've got it right about trade posts. It's really all about saying thanks for taking the time to send me something.
April 30, 2014 at 12:24 AM

Kevin said…
Petethan - I've always appreciated the checklist on the back of the team set package because it lets me know what to expect. Sure, I'd buy it regardless of who was included, but it doesn't hurt.
April 30, 2014 at 7:55 AM

night owl said…
Once a Cub: I've often wondered the same thing: Why do cards someone bought at a show or online draw more comments than cards obtained in a trade package?

Mark Hoyle: Smerlas was so talkative that reporters would swarm his locker at all times. It was difficult to catch him alone.

Zippy-Zappy: I can clean my desk again. Bring it.

petethan: Me and my scanner fight all the time.

Play at the Plate: That's why I'll always do them.

Kevin: Good point. I didn't think of that.