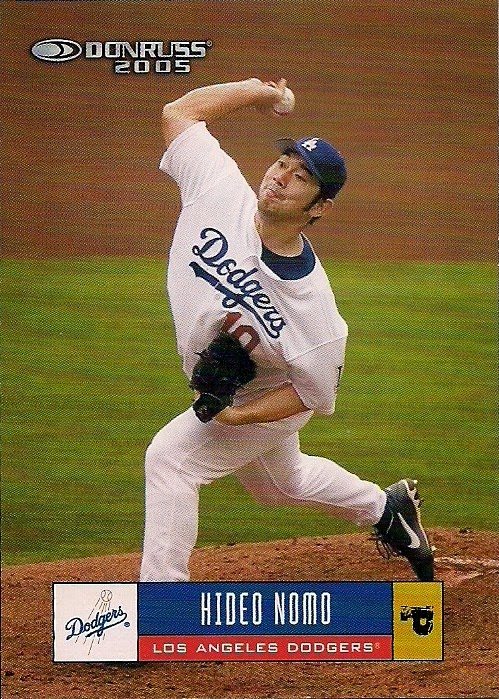 You probably haven't noticed, unless you have a stalker-like fascination with this blog and if that's the case I don't want to know, but I've been cutting back on a few blog-related activities.

It's all in the continued attempt to get the maximum enjoyment out of this hobby without having it take over my life. About three years ago, I was involved in just about anything card-related that I knew, and it really exhausted me. I've slowly removed myself from a lot of hobby outlets, have stopped devoting myself fiercely to modern cards, and have stopped blogging like my salary depended on it.

I see myself stepping back even more in the coming months, although you don't have to worry about me ditching this blog or any of my others. Most of the streamlining will be as unnoticable as what I've already done.

For example, the "Dodgers I Collect" page up top no longer features players like Jackie Robinson, Matt Kemp, Steve Garvey, Duke Snider, etc. When I lost a bunch of data from those lists, it was too tiring to go back and try to add the missing items. And then I thought, "why am I doing this? I'm not even really a player collector anyway."

So I deleted all but a few players. I'm now down to the core five players with which I started: Ron Cey, Sandy Koufax, Orel Hershiser, Clayton Kershaw and Hideo Nomo up there.

That's how it will remain. Believe me, I still want all your Robinson, Kemp, Garvey, Snider, etc., etc., etc., cards, but I'm just not going to list out everything I have anymore. Maybe that'll cost me a card here or there, but it's not worth it.

Another feature that I've stopped is the "Dodger Player of the Day" list on the sidebar. It was a relief to let go of that thing. Deciding the Player of the Day, while not the most taxing task I do all day, still wasted brain cells that I could devote to something else. For example, last night's game against the Diamondbacks, who would I have picked? Adrian Gonzalez or Hyun-Jin Ryu? Gonzalez or Ryu? Gonzalez or Ryu? I would've wasted two minutes on that before eventually picking Gonzalez.

Then there are the times that I miss games and have to go back and figure out Players of the Day for a whole week's worth. All of that for an end-of-the-year blog post wrap-up. Not worth it. So it's gone.

Meanwhile, one thing I've added to the blog is the return of word verification for comments. Yeah, I know that's not a perk. But it was an experiment to go without word verification anyway. For a couple weeks everything was cool. And then the other night I spent a half hour, when I really wanted to sleep, clearing out some manic spammer's comments. So get ready to type in all those letters and numbers again.

I'm sure none of this will affect you're enjoyment of the blog. And if it does, well ... tough. This is a free service.

BASEBALL DAD said…
Sometimes you just have to say "What the f___! " and do what makes you happy !

If someone doesn't like it and quits reading, it's their loss not yours !!

Nachos Grande said…
Yeah, blog for yourself and others will enjoy it (and if they don't, who cares there's umpteen billion other blogs out there). That's my attitude anyhow.
April 12, 2014 at 8:29 PM

JediJeff said…
So now I have to type a code to be a snarky a-hole?