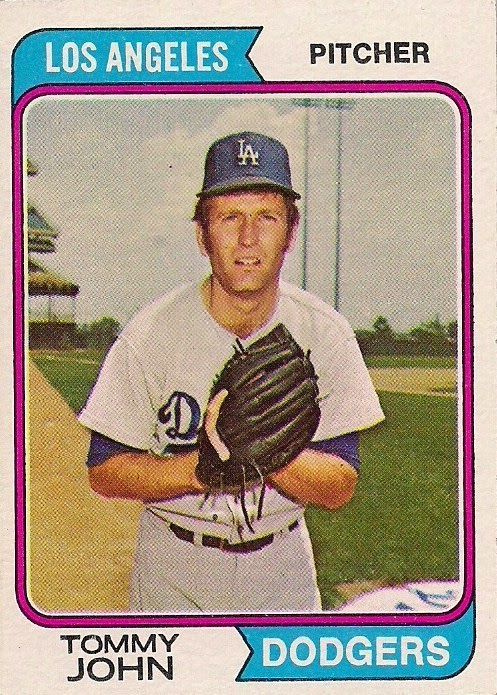 It occurred to me the other day that I have been accumulating baseball cards for 40 years. That's not an approximation. The first time I ever held trading cards in my hands that were my very own happened in 1974. That's exactly 40 years ago.

I don't know at what point in the year I pulled that Tommy John card out of a cello pack of '74 Topps purchased by mother. I would imagine it would have been in the spring. So this is the perfect time to celebrate my 40th anniversary of collecting cards.

But that little boy of 9 years old would be a bit surprised with what I have become.

Back when I was a kid, the only card collecting objectives were to obtain pictures of baseball players. In the ensuing years, that expanded into football, hockey and even basketball players. And there were Star Wars and Close Encounters cards, too. But mostly it was baseball. Guys in uniforms and ball caps.

If my 9-year-old self were to reappear here in 2014 and view my collection -- and that would be very weird -- I think he might be a little disgusted with what I have now.

Sure, 95 percent of it is still pictures of baseball players. But what about this other stuff? 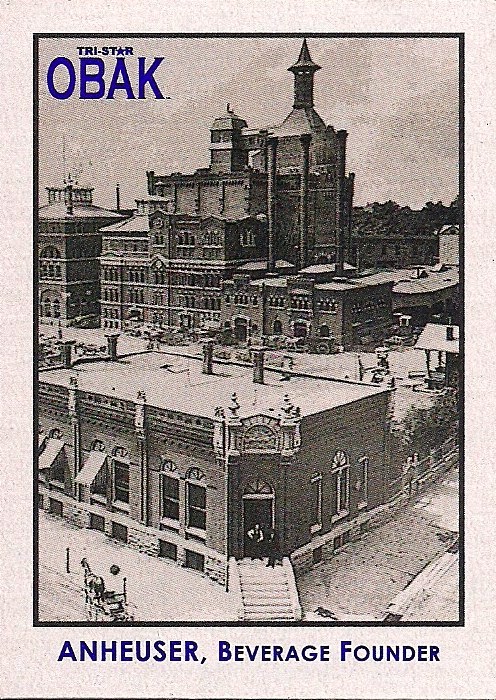 Cards of boring old buildings? Who would want a card of that? 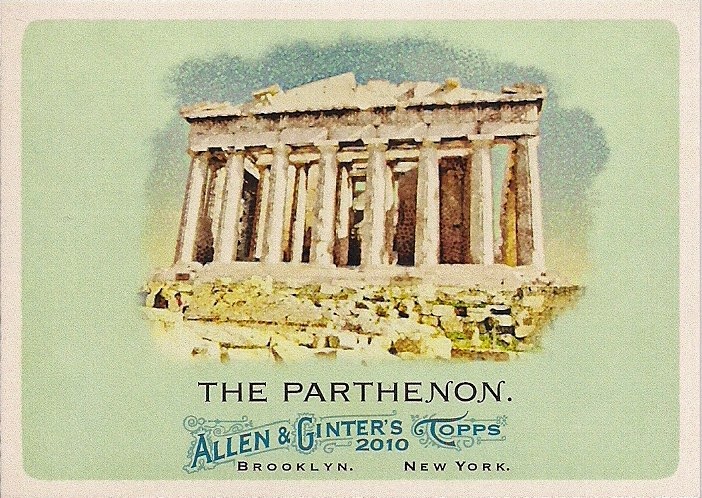 More old buildings? That's a picture from a history book. Who wants to be reminded of school? 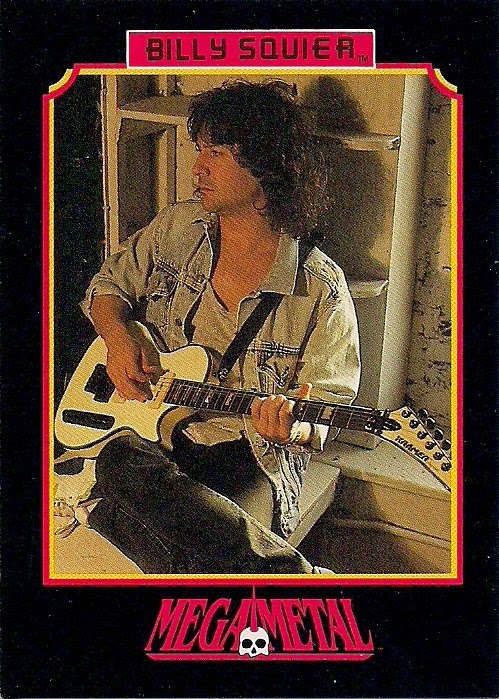 Singers? When I was a kid and the radio was on, I didn't think about who was singing the song. I just knew I liked the music that came out of it. Maybe Bob on Sesame Street played a guitar but why would I want a card of Bob? 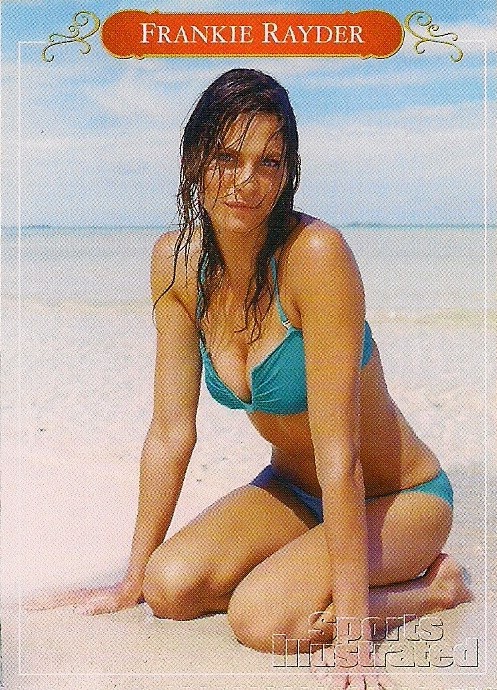 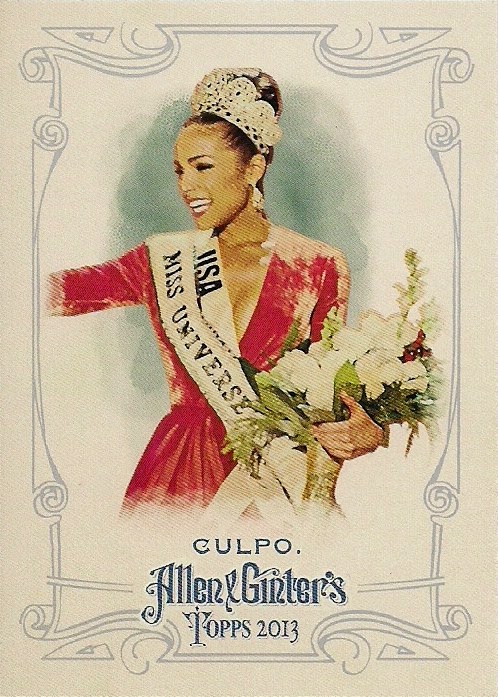 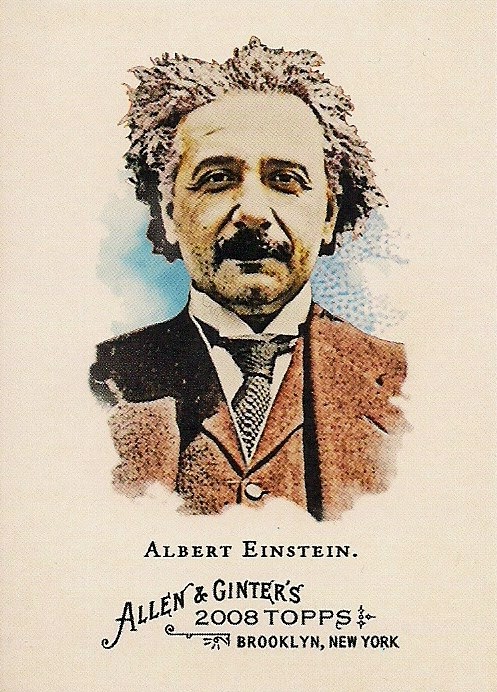 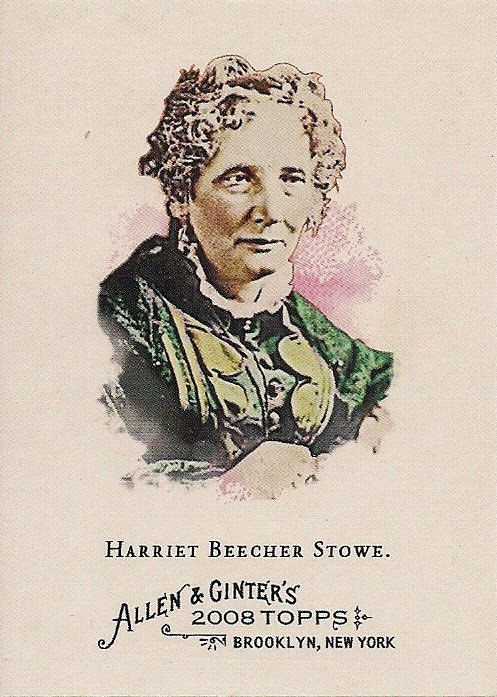 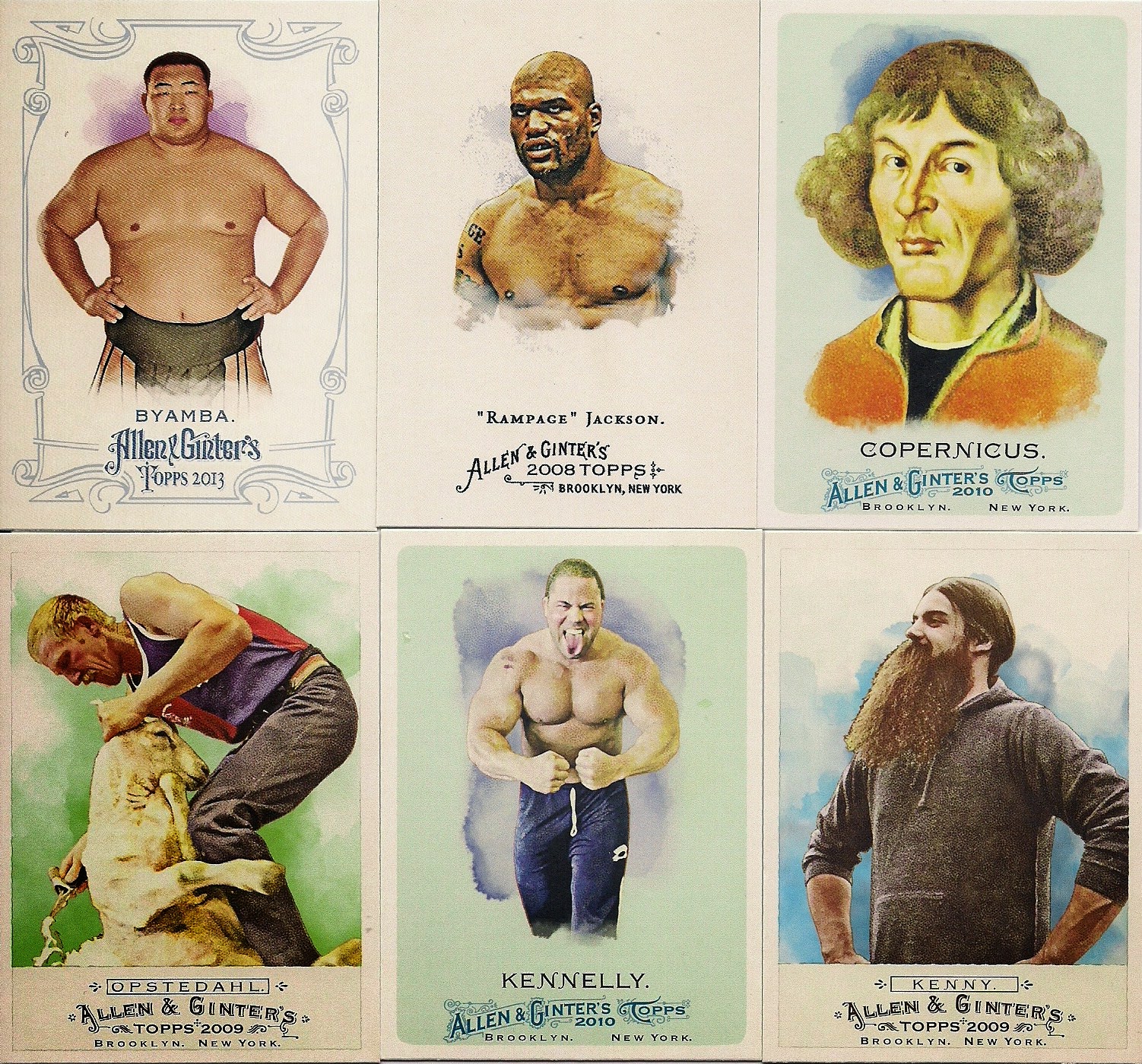 In fact, my 9-year-old self wouldn't understand Allen & Ginter at all. All of these cards would either be horrifying or cootie cards you could foist upon your friends. 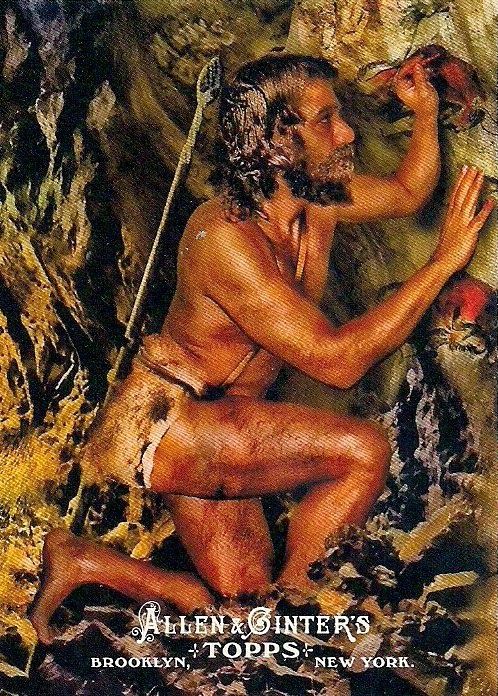 My 9-year-old self wouldn't understand cards of cavemen either. Dinosaur cards would be cool. But cavemen were just there to be stomped on and torn apart by those cool dinosaurs. Cavemen cards are like collecting cards of the Washington Generals. Who does that?

As a 9-year-old, I'd also question some of my current collecting habits: 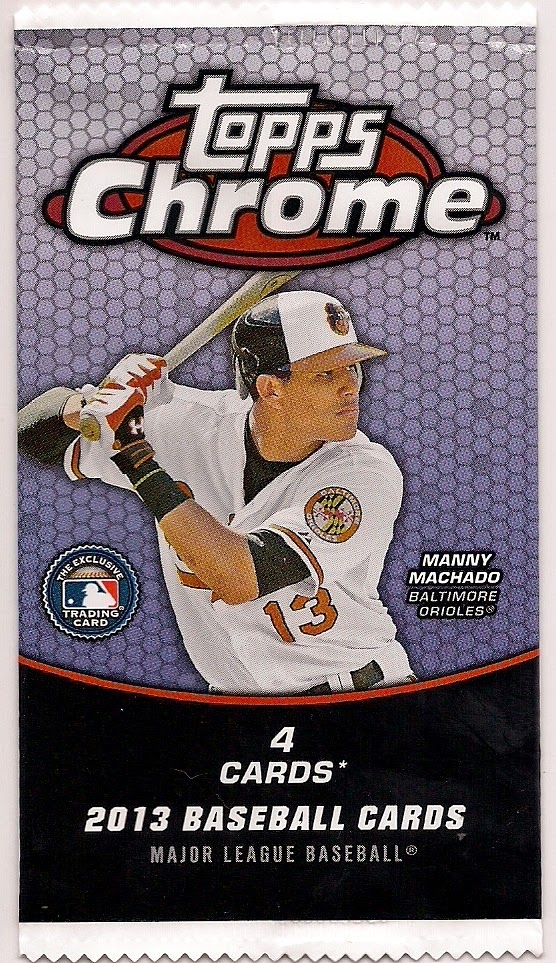 For example, why in the world am I saving wrappers? Roll that stuff in a ball and whip it at your brother until he cries and mom comes in and screams at you to throw that stuff in the garbage!

This would blow my 9-year-old mind. Why weren't these cut into three cards IMMEDIATELY? Why is it still intact? Why are you just sitting there reading this? GET SOME SCISSORS!!!!! 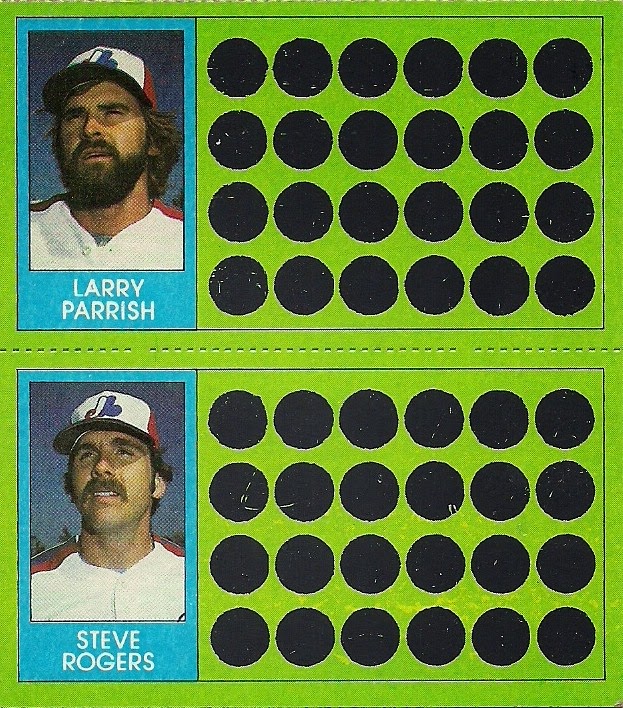 This, too. Why aren't all of these circles scratched already? 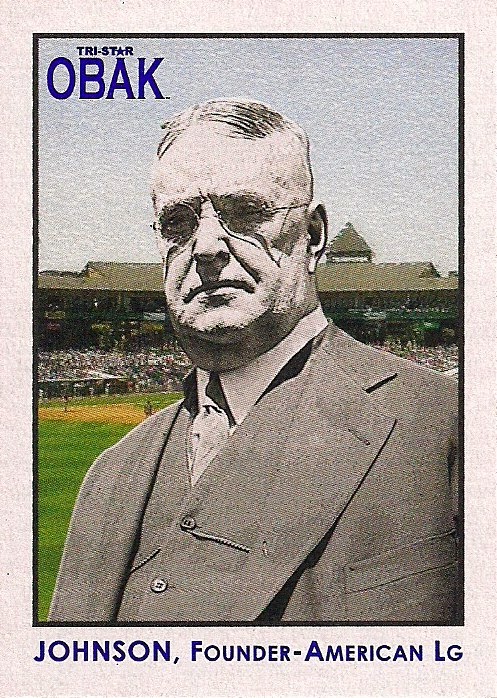 This card would give the 9-year-old me nightmares. 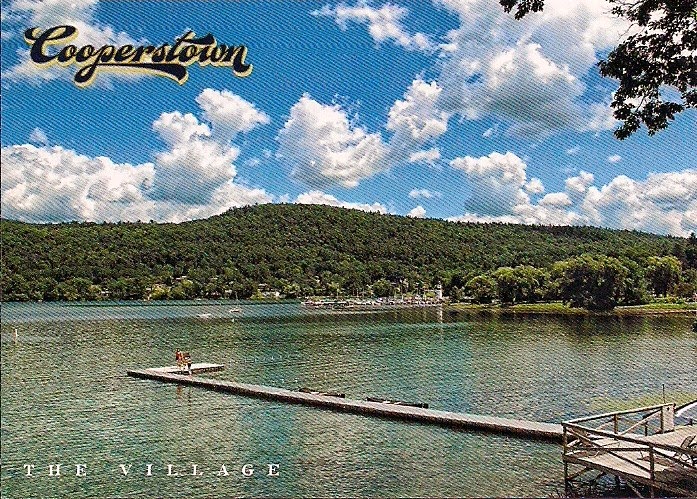 Scenery? I can see the 9-year-old just staring at this card in open-mouthed bafflement.

Yup, a lot has changed since I first saw that Tommy John card 40 years ago. I can see the value in a lot of the cards above (although I still don't know why I have a few).

But one thing is the same. I have the exact same enthusiasm for collecting small pieces of cardboard that I did when I was 9.

I fully expect there to be a 50th anniversary.

Swing And A Pop-up said…
Congrats on 40 years. Your post is very similar to my experiences as a child collecting, but in addition to Star Wars and Close Encounters, I had Charlie's Angels cards...so I was already seeking out the babes.
May 1, 2014 at 2:08 AM

Play at the Plate said…
Congrats. Anyone that does anything for 40 years should be congratulated. I can't wait to read about your 50th anniversary .
May 1, 2014 at 3:19 AM

BobWalkthePlank said…
Congratulations. Hope it continues to be fun and exciting.
May 1, 2014 at 9:12 AM

GCA said…
I remember my first handful of cards was also from the '74 set. It included a Yaz and a couple Brewer players. Not sure about the others. They are part of my set now. My Tommy John happened to be autographed.

I just got a second cabinet for card storage in my "card room" this past weekend. There's also a full bookcase of binders and a wire shelving unit. I expect the next phase will be a bigger room....

Naturally, this got me to thinking about that first card I had in my hand as a youth, but I've got to wait a couple more years for a nice big ol' round number, < 40, however.

View From the Skybox said…
Congrats!