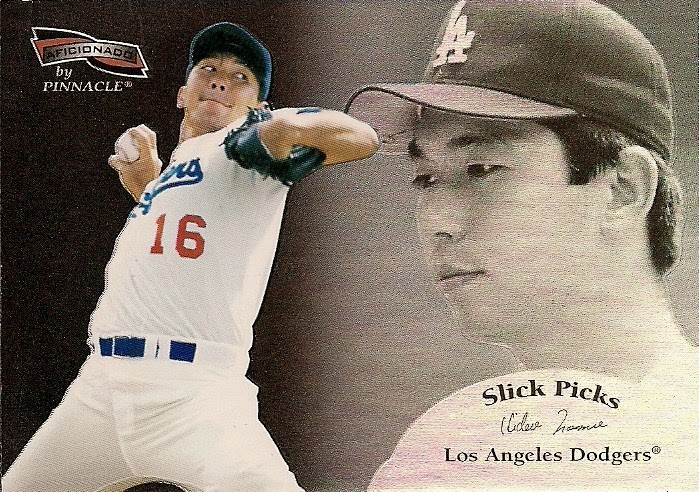 Online, I often get confused for someone who lives in California. I'm a Dodgers fan. I'm awake during what many would consider "West Coast hours". But as many of you know, I live a long way from California.

That's OK with me. Most of the time I don't wish I lived there. There's only a few times when it would be convenient. The first would be to see my brother a little more often as he lives out there. The second would be to get my hands on more Dodger cards, as I'm sure they're more plentiful there, albeit probably more expensive. The third would be for days like today -- Opening Day at Dodger Stadium.

I want to be at Dodger Stadium for Opening Day. And maybe one day I will.

But for now it's all a dream. I'm not even able to enjoy the game vicariously from 3,000 miles away because I've got to work.

What I do have is cards. From someone who lives in California.

These are all finds from Dave R., who has sent me cards before, just because he likes reading my stuff. Nice guy, that Dave. 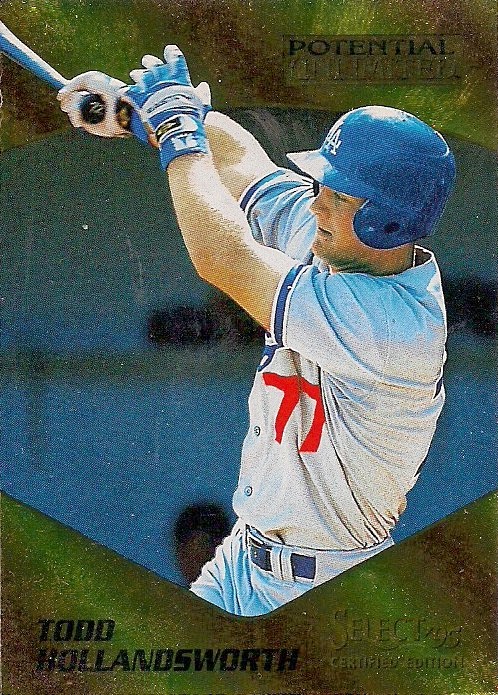 Most of these cards were from the '90s, which means three things: 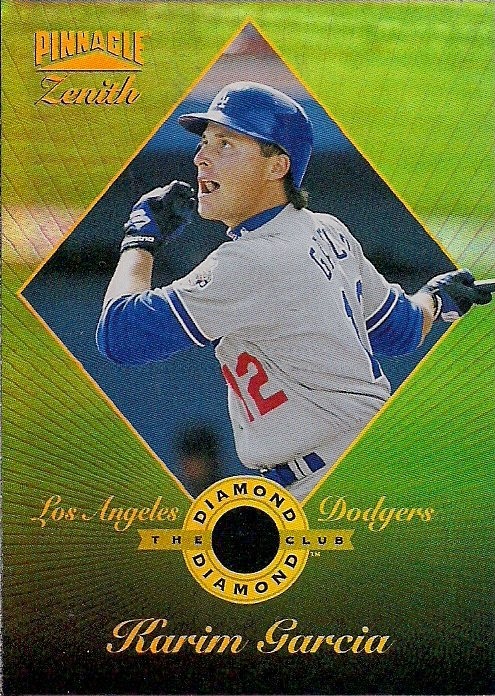 Here, Karim Garcia is doing some weird tongue thing, because he is mesmerized by this card's shininess. 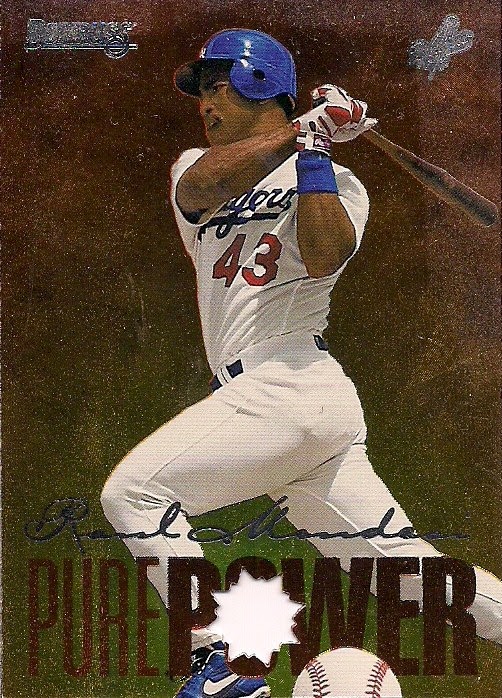 You might think that the star-shaped hole at the bottom means there was once something imbedded in the card, because we all know how much we like to imbed things in cards these days.

But in 1995, it was just a hole. It's supposed to illustrate a ball blasting through the card. 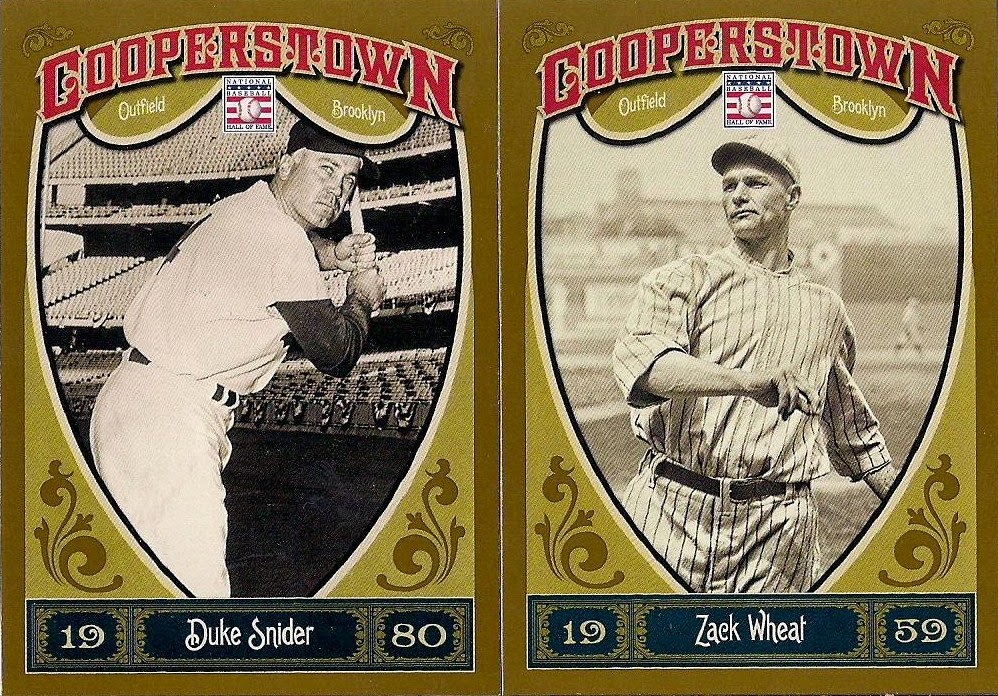 OK, we're out of the '90s now, but the less said about these the better.

The Wheat card is OK, but that Snider is now one of the worst of his that I own. Still got to complete those sets though. 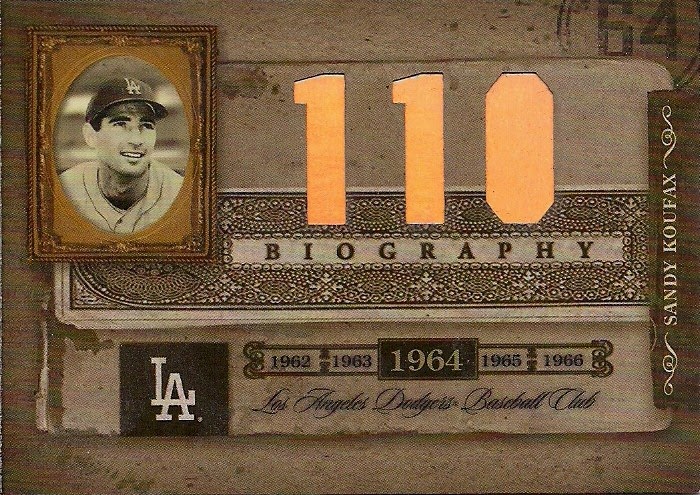 I wanted to tell you about this thing, but my research methods and materials failed me. It's from 2005. It's a Donruss Playoff thing. There are Babe Ruth and Ted Williams versions that have bat pieces in them that go for a lot of money. I'm guessing this is a "base" version. I don't know what the shiny stuff is that makes up the "110" 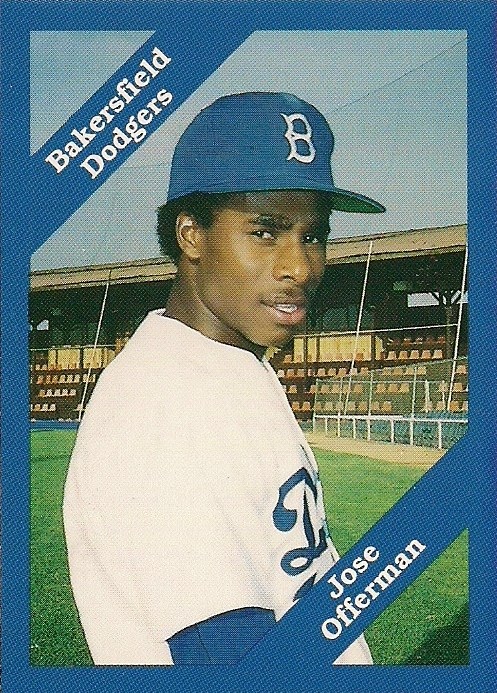 I received what I believe is the entire set of 1989 Bakersfield Dodgers. I have a lot of these already, but this Jose Offerman card doesn't look familiar. Nice grandstand there. 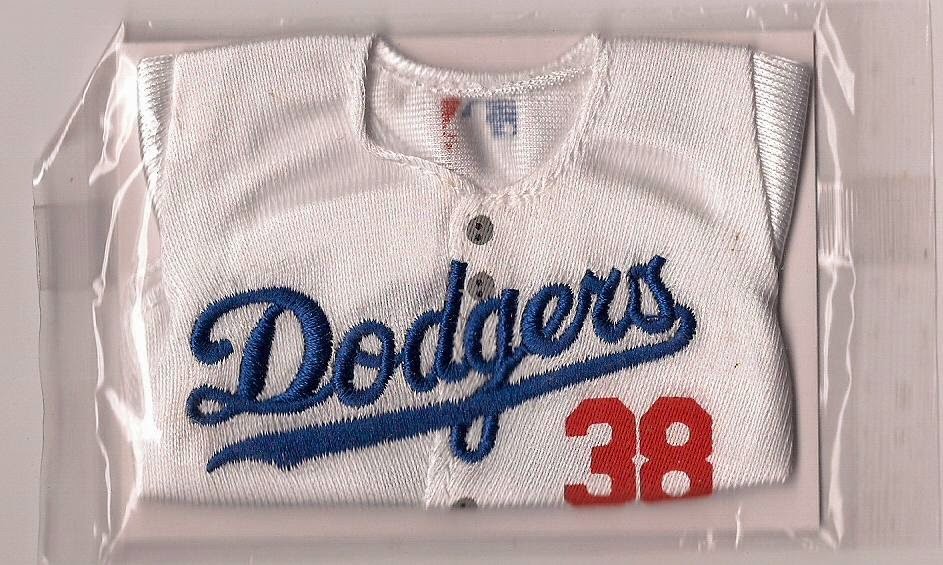 Nice. I've seen these before. Can't tell you what they're from though. I'm assuming this is a miniature version of Eric Gagne's jersey as I don't know why we'd make something collectible for other recent #38ers like Dave Mlicki, Ramon Troncoso and Rudy Seanez. 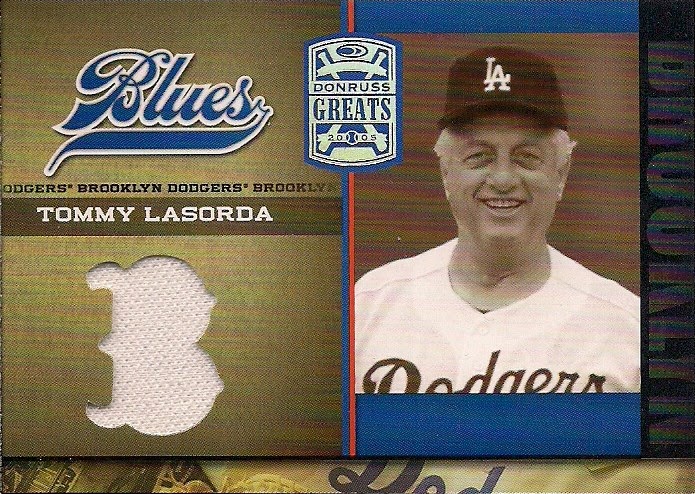 Finally, here is a card with an official jersey piece of Tommy Lasorda, my first Lasorda relic.

I don't know how authentic that is as I don't see any tomato sauce on that piece of material. Also my brain got scrunchy when I realized the card is referring to the Brooklyn Dodgers but the photo has Tommy in an L.A. cap.

But not that, not nothing can take away my happiness that today is the home opener for the Dodgers.

Not the distance.
Not that I'm working.
Not that they're getting blasted by the Giants right now.

In a perfect world, the Dodgers would be winning and I'd be there to watch it. But that's a dream right now, so I'll just be happy that someone from California is sending me Dodger cards just because.

BASEBALL DAD said…
Nice cards ! Those are the kind of friends to have .

Zippy Zappy said…
That Wheat looks incredible compared to the other cropped photos in the set.
April 4, 2014 at 10:27 PM