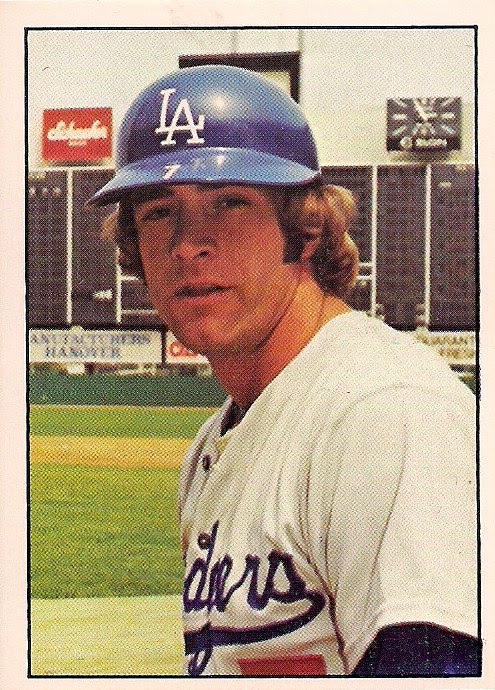 I'm going to a card show this weekend. I think if you ask most collectors, a card show is the epitome of card shopping experiences. I know I certainly believe that.

Still, there are others who claim that shopping online is the most productive card shopping experience. And I can't really argue with that after what recently arrived in the mail.

I came into a little money last month -- work bonus time -- and I devoted some of it to a COMC shopping spree. I buy cards on COMC maybe twice a year. That's about all the budget will allow. But each time it's a blast and there is so much to choose from that I have a difficult time picking a direction.

As always, I adopted the scattershot method, focusing exclusively on Dodgers this time, but all across the board in terms of card style.

There were 1976 SSPC cards like Steve Yeager up top and super shiny black refractors ... 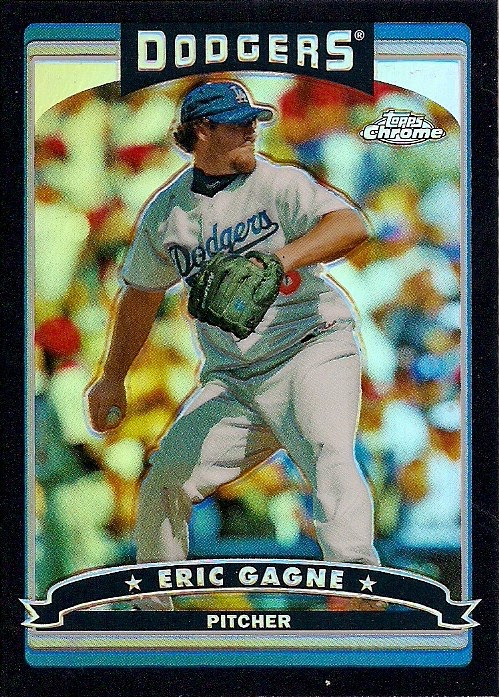 I just find too many different kinds of cards irresistible.


For example, these things: 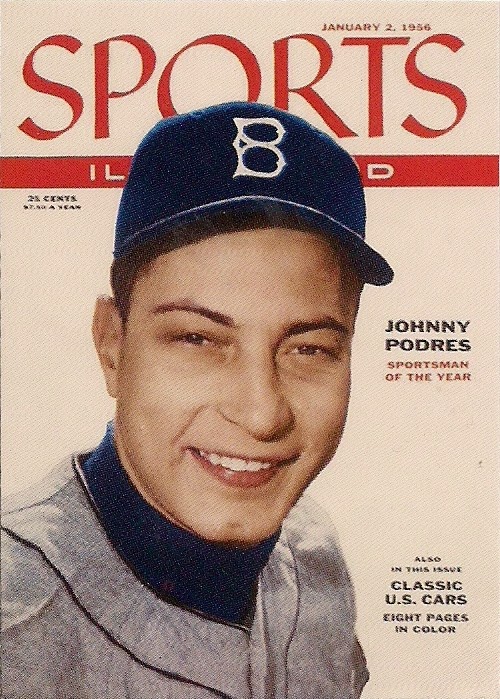 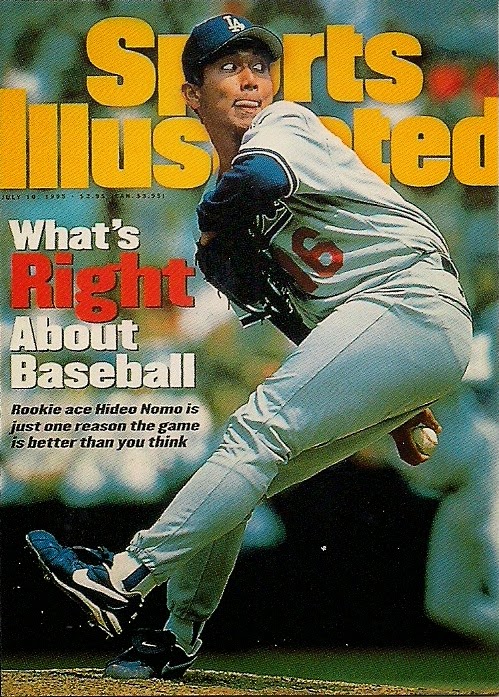 Back in the late 1990s, Fleer Sports Illustrated visited the card aisle. Most of the base cards were typical boring 1990s full bleed fare. But mixed among those, sometimes as inserts, sometimes as part of the set, were cards of past SI covers.

It took almost all my power not to scoop up a bunch of other cards from the set, especially the ones from the late '70s.

That will be for next time.

I also devoted a significant portion of funds to players I collect, like Hideo Nomo. Besides the SI cover card there is this SI card: 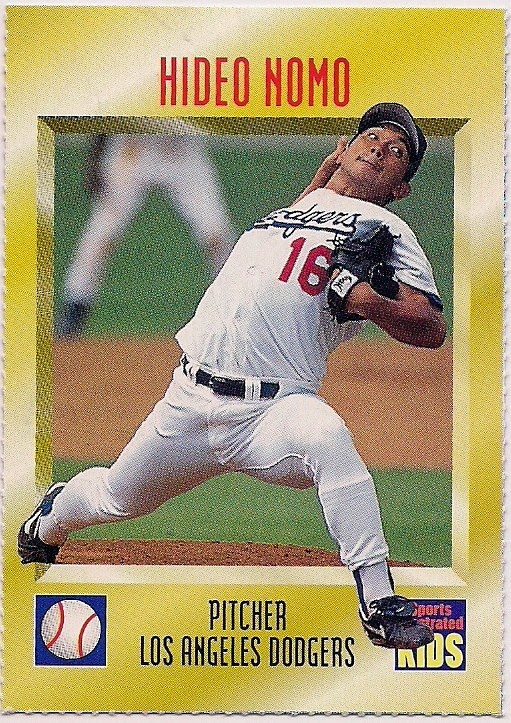 This is a mid-90s Sports Illustrated For Kids card perforated in all its glory. 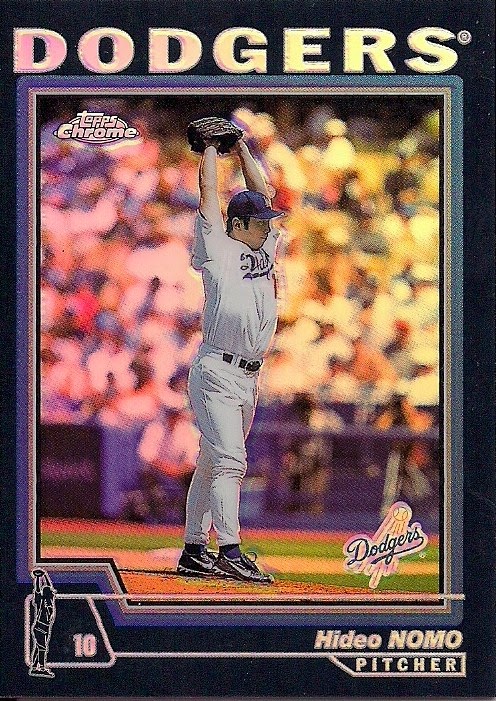 That's a much fancier black refractor from 2004. 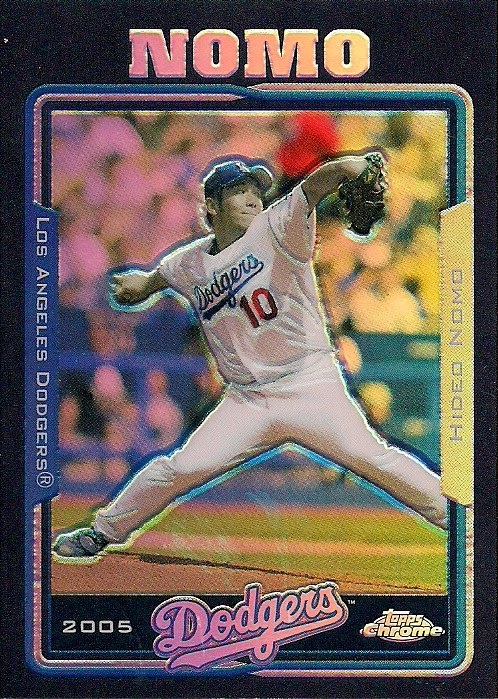 And this is my favorite year of all for black refractors, 2005. Again, I had to restrain myself from just buying a bunch of 2005 black refractors and hitting "checkout". 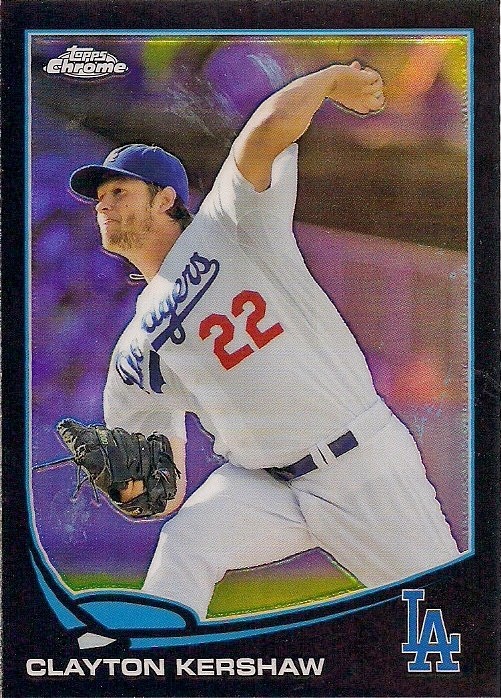 The last black refractor in the purchase is of baseball's best pitcher. Black refractors are numbered these days (this to /100), unlike several years ago. I think that if any colored refractors should be numbered, it's the black ones. Numbered gold refractors, for instance, just bores me. 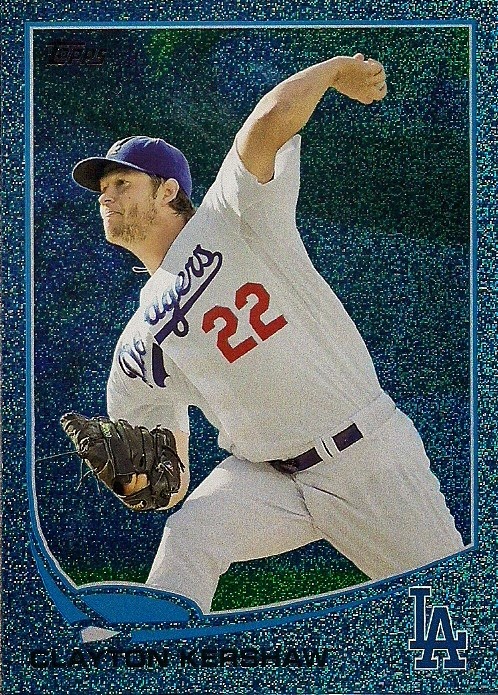 Yup, still with the parallels. I'm a sucker. This is the blue slate Kershaw parallel from last year. I think I'm up a dozen different Kershaw parallels from 2013. I'm not even all that crazy about this photo, but the guy had a hell of a 2013. 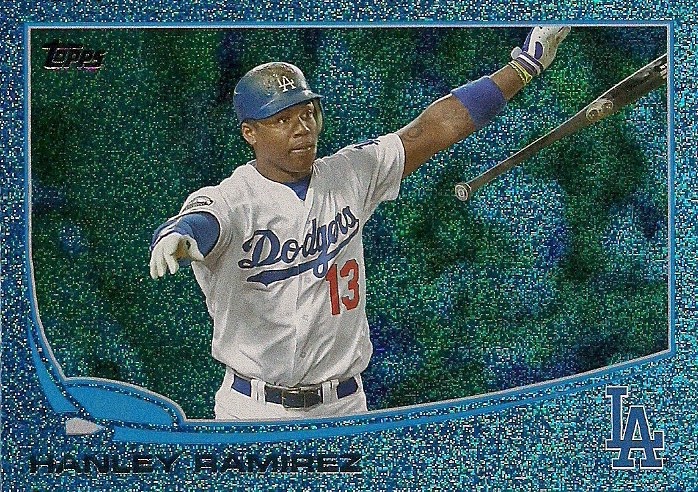 I thought I should devote some parallel love to the 2013 Dodger card that I like the most. So here's a blue slate parallel of Hanley's excellent card. 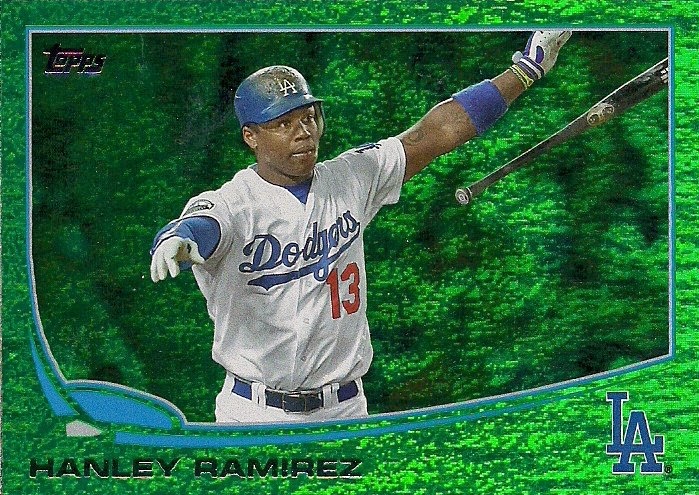 And here's the rain forest parallel. 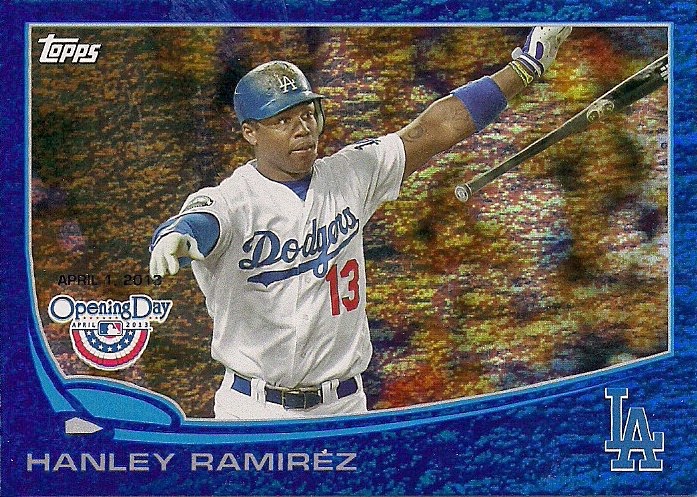 And here's the Opening Day blue numbered parallel. I still don't know if these have a name. 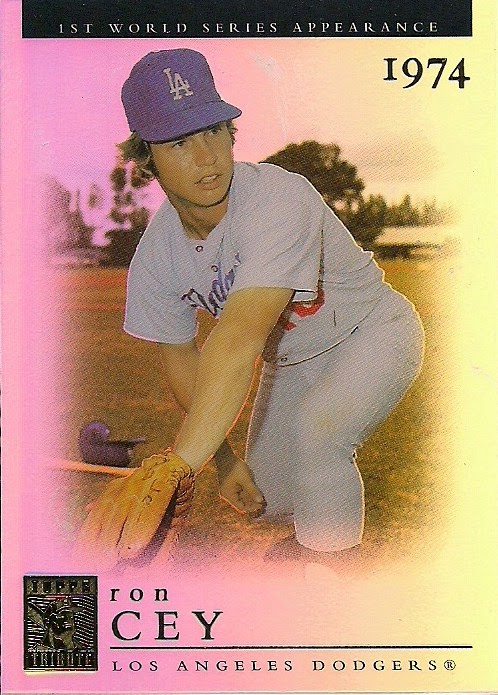 The final semi-current card that I obtained was this Ron Cey 2003 Tribute card. I practically leap at Cey cards that I know I don't have. Especially ones that aren't jazzed up with bat pieces or swatches.

Cey was a player for the people. Make his cards exclusive is not in the spirit of the Penguin. 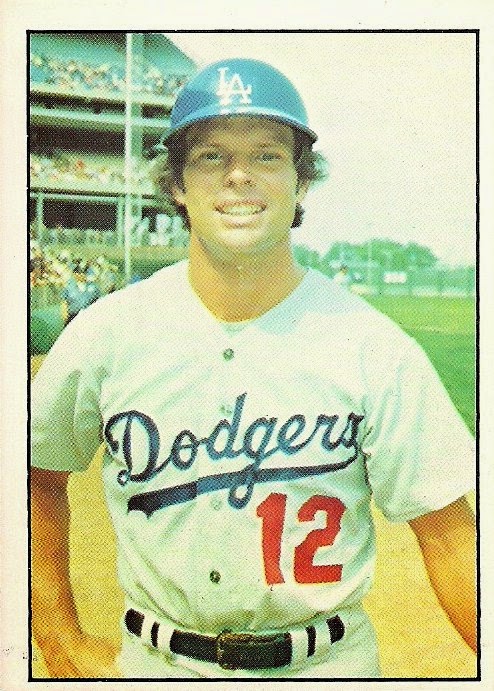 I went back in time with the rest of the cards. This is the third-to-last Dodger I need from the '76 SSPC set (only Downing and Hooton left). It's a guy named Paul Powell.

Powell played all of 10 games for the Dodgers (and 30 overall). So this card is a treat. I love cards like these. 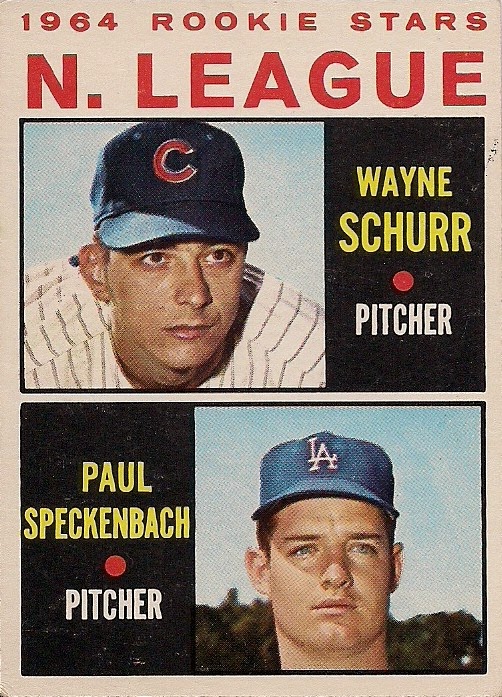 This is the only card in the group featuring a non-Dodger, but we're focusing on Paul Speckenbach, who is even more obscure than Paul Powell.

Speckenbach never got out of Class A. He wasn't even with the Dodgers by the time this card came out -- it mentions on the back that he had been traded to the Cardinals. His numbers in the minors weren't good at all, 5-6 with a 7.17 ERA. 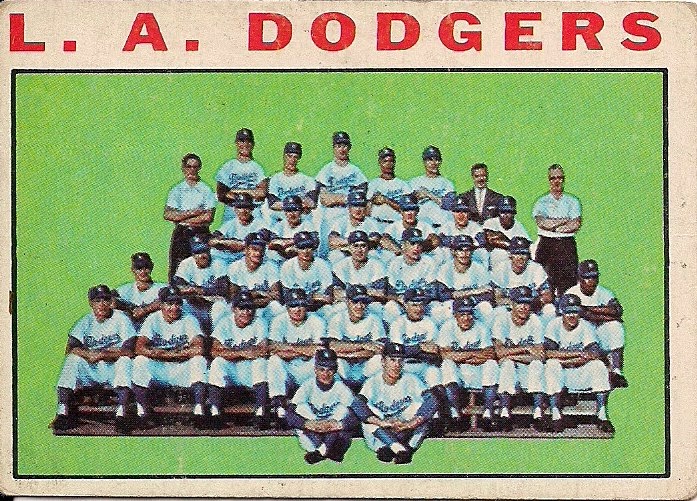 You won't find Speckenbach in this card. That's the World Champion 1963 Dodgers posing for their spot in the '64 Topps set. I have no idea which one is Sandy. I'm guessing Big D, Don Drysdale, is the highest guy in the back row. 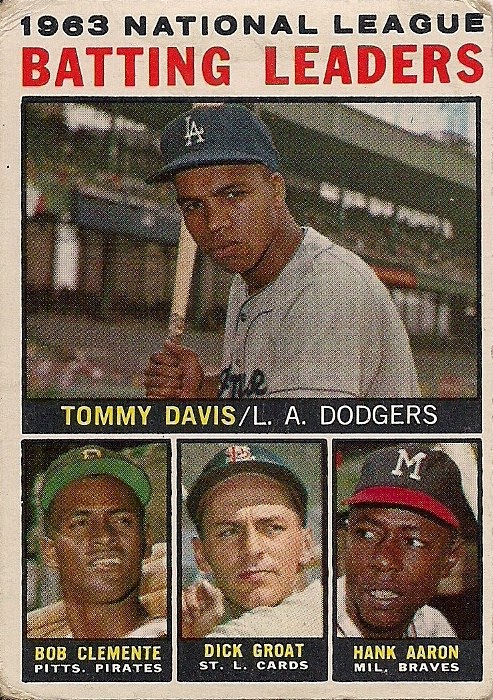 Getting close to completing the '64 Topps Dodger set, which means finding cards like this. It's pure greatness. Tommy Davis is the king and Clemente and Aaron are his subjects. The world is right with this card. 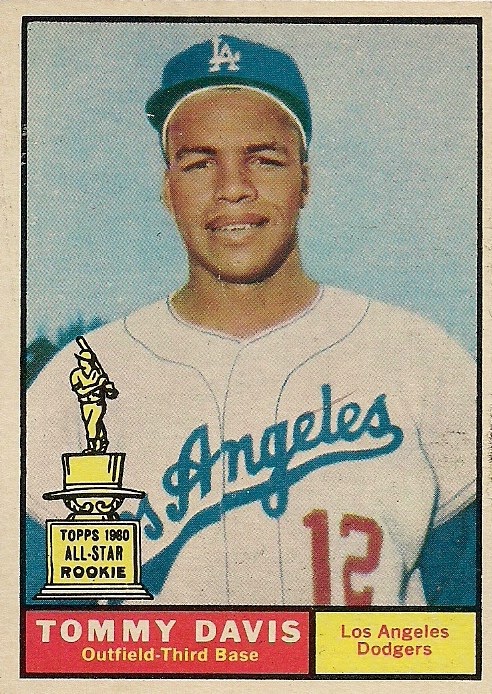 Tommy had a hell of a start to his career, which made this card high on my want list for a long time. Drink in the spectacular rookie trophy.

And that is the card package that I will be trying to top at the card show.

As great as it is, I have a feeling I will be able to do just as well at the show. The thrill of seeing all those cards spread out before you -- instead of one or a few at a time when you're shopping online -- is intoxicating and stays with you a long time. Shopping online does not do that.

Show shopping really is the best card shopping experience I know, even if COMC is pretty fantastic, too.

petethan said…
I was drooling over Speckenbach until I got to that batting leaders card. Tommy Davis as the BMOC (big man on card) with Aaron and Clemente. Now that's sweet. Nice spree!
April 5, 2014 at 7:28 PM

Nick said…
I had a copy of that '61 Davis set aside to send you. Looks like it'll go to another of the gazillion Dodger bloggers around.

Sweet pickups all around, but I especially love the SI Magazine Covers. That would be a fun insert set to build.

COMC is great, but that "intoxicating" card show feeling you described is why I'll always prefer in-person shopping over online shopping. You can't match a card show.
April 5, 2014 at 8:04 PM

Anonymous said…
I looked at the Tribute Ron Cey card, and my immediate thought was that the photo would look awesome on a 'real' baseball card, not one of these shiny, fade-into-the-border-y Tribute cards.

BobWalkthePlank said…
I do miss hitting up a card show and finding that one card you've been hunting for. My area has been void of a show for at least five years.

Commishbob said…
Nowadays I take OTHER PEOPLES want lists to shows, but it's just as much fun. Maybe more.

Anonymous said…
For anybody who doesn't read the comic strip "Pearls Before Swine", Ron Cey factors into a horrible play on words in today's strip:
http://www.gocomics.com/pearlsbeforeswine?ref=comics#.U0Gq8Ff-a6s

Mark Hoyle said…
Walking into a card show is definetly a rush. But pushing the button to purchase after loading up the cart on a COMC purchase feels pretty damn good also
April 6, 2014 at 7:10 PM