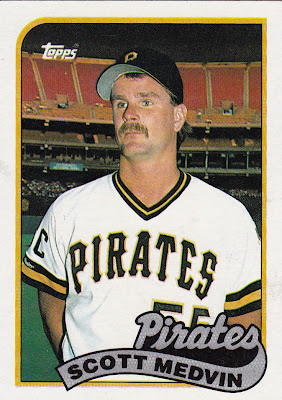 It's crushing when the world you've set up for yourself comes crashing down around you.

For years, I have led myself to believe that the 1989 Topps John Tudor card is the only night card in that set. To me, a night card connoisseur, this made the item special. Topps went out of its way to find a card of Tudor, acquired in a late-season trade in 1988, and the effort paid off because not only would the Dodgers go on to win the World Series that year, but it was the only night card in the set.

Now, I wasn't totally convinced when I read the post and looked at the scan. Scans can be deceptive. So, I had to dig out my '89 Topps binder with the cards that I have seen 8 trillion times before and track down the Scott Medvin card to see with my own giant owl eyes.

After staring at it for a long time and studying old pictures of Three Rivers Stadium online, I have determined that, yes, there are at least two night cards in the 1989 Topps set. It's kind of difficult to see the press box area and stands lit up -- what with that packed upper deck there -- but you can't miss the unending darkness at the top of the photo.

The background to Medvin's season fits with the night card scenario, too. Medvin didn't switch teams late in the season like Tudor, but he did move from the Astros to the Pirates in April, after Topps would have taken most of the photos for the 1989 set. He then pitched for Triple A Buffalo for most of 1988, and I'm sure I saw him in a few games there since I was living in Buffalo at the time.

Medvin then was called up to the Pirates late in the '88 season and appeared in 17 games for Pittsburgh. Therefore, Topps would have had to scramble to find a photo of Medvin in a Pirates uniform and had limited -- mostly night -- games to take a picture.

So there you are: another night card! I guess it's not all that crushing.

Of course, I'm the only one who cares about that. All you uniform junkies have been starting at the "C" on Medvin's right sleeve since the beginning of this post and haven't heard a word I've said.

Well, I was a little curious about the "C," too. After all, Medvin couldn't have been a captain of the Pirates. So, I looked at some more 1989 cards. 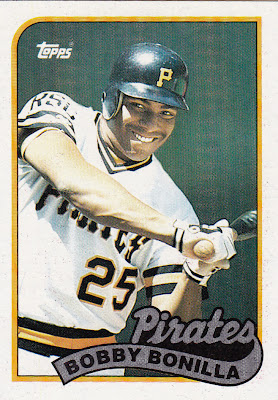 Bobby Bo figured it out for me, along with Dressed to the Nines.

The Pirates wore the initials "RSC" on their sleeves during the 1988 season in remembrance of Pittsburgh mayor Richard S. Caliguiri, who died in 1988 while still in office.

So now you know.

And now there are two night cards in the 1989 Topps set.

Until someone finds another one.

Commishbob said…
Greg, something about this one just doesn't seem right. Kind of looks like he is just pasted onto a background of Riverfront. Or maybe it is a night card and the lighting makes it look 'off'.