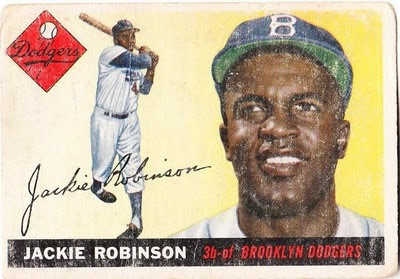 OK, I admit, Robinson is a ringer.

I'd be a little surprised if he didn't win the entire Cardboard Appreciation, The Review 2 contest. Although this contest is intended to pick the best card, regardless of who might be featured on it, there are just some players that cause everyone to forget everything they've been told.

"Is that Jackie? I'm voting for him." It's just got to happen.

So, yeah, the 1955 Robinson easily won the last round of the Cardboard Appreciation vote-off, and it heads off to join Lindy McDaniel, Vic Power and Luis Alvarado.

That is definitely an old-school crew there. The newest card in that bunch is from 1973.

Here is how the voting went:

Now, let's see if we can find a slightly newer card to advance to the next round.

The choices this time around are fairly pedestrian. In fact, I don't think I have a lot to say about them. There is one card that I think will blow away the others. But that's for you to decide. 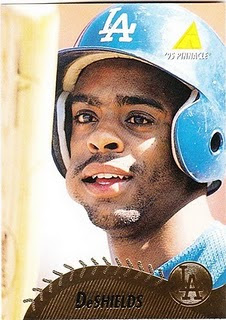 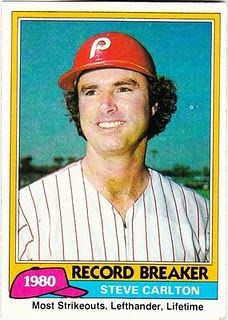 2. 1981 Topps Steve Carlton Record Breaker: This was one of the cards that police determined was stolen and stashed in a grassy area in Washington, D.C. last fall. I know this because there was an article written as if a bunch of '80s cards was a painting in the Louvre. 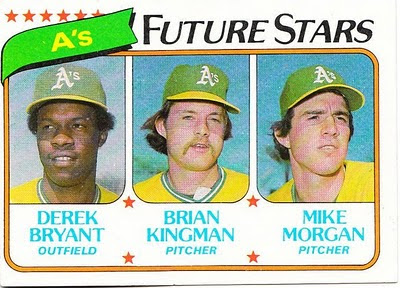 3. 1980 A's Future Stars: I wondered, when I wrote this, whether Mike Morgan appeared in more uniforms on baseball cards than any other player. I still don't know. But I think he's got to be in the top three or four. 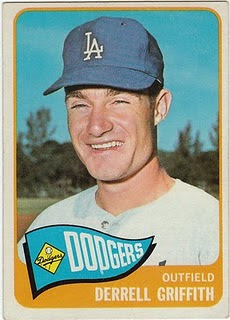 4. 1965 Topps Derrell Griffith: Is Griffith laughing at a dirty joke, or did he just realize that mom showed up with some freshly baked cookies? We'll never know. 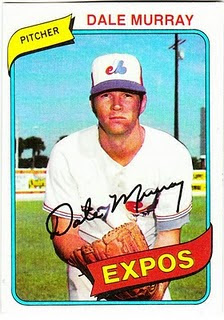 5. 1980 Topps Dale Murray: Topps took this picture five years prior and tried to pass it off as a current picture. Little did it know that almost 30 years later, some random dude would study cards in such bizarre detail that they would be found out. And they say I'm unproductive. 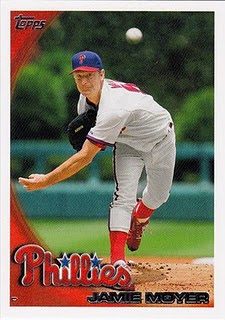 6. 2010 Topps Update Jamie Moyer: If Moyer comes back next year like he says he will, he will do it as a 49-year-old person. And he will be my new favorite person. 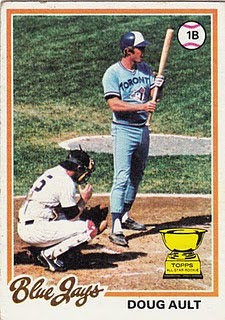 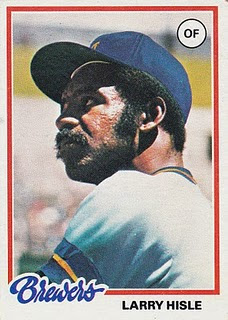 8. 1978 Topps Larry Hisle: The day I discovered my first error on a baseball card, I was looking at this Hisle item. Remember when we got excited over error cards?

And there's your bunch of randomness. Choose wisely. Poll is on the sidebar. I'll see you back here with the results, when I'll be on vacation! Woo-hoo!

Play at the Plate said…
I almost voted for Delino just because of your description. Too funny. Well, not TOO funny, but I did laugh out loud.
August 5, 2011 at 1:47 AM

Chris Stufflestreet said…
Ault's sad story is punctuated by the presence of Thurman Munson on that card.

Anonymous said…
I am REALLY tempted to place a vote for Tom Cruise's doppelganger, "Mike Morgan" - but I am much too afraid that Jerry McGuire might use his witchcraft on me.

No, I have got to go with the '78 Ault for several reasons:

- it puts me "in the stands" at Yankee Stadium, just a wee bit before I was born. You can't beat that.

- it provides a courtesy shot of Munson behind the plate. You can't beat THAT, either!

- it prompted my education for the day, concerning Ault's heroics in the Jays' inaugural game and, unfortunately, his fate in '04.

Fuji said…
As I scrolled down... my first choice was Derrell Griffith. The 65 design is awesome... and when I saw Griffith... the first thing that popped into my head was Sean Penn.

But... after viewing all of the cards... Doug Ault gets my vote... I had never heard of him before today. But you stirred my curiosity and I eventually found Wilker's post. That where I learned about him hitting the first two home runs in Blue Jays history.

AdamE said…
I'm no voting in protest of none of the cards being worthy of the Great Night Owl's cardboard appreciation.