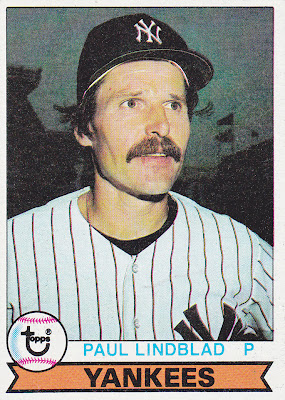 Have you ever thought about what makes a fitting final card for a player? I have. To me, this is an ideal farewell card for the late, great Paul Lindblad.

Lindblad was pitching for the Rangers in 1978 when he was purchased by the Yankees on Aug. 1. He appeared in seven games for New York and was purchased again after the season by the Mariners. He wouldn't appear in the majors after '78, and this 1979 Topps is the final card of his career.

The card looks the way it does, probably, because Topps didn't have much time to find Lindblad in a Yankees uniform, given that he arrived in New York in August. Normally, this would mean that Topps would go the airbrush route. But Topps is located in New York, so it probably found a way to track down a photo of Lindblad in pinstripes.

It wasn't made the normal way -- during daytime at spring training -- that baseball card photos were made in the '70s. Instead, Lindblad appears to have been photographed in Yankee Stadium just before the start of a night game.

The appearance of the photo accidentally captures perfectly Lindblad's pending exit in the majors. As the shadows envelop him and the flags fly amid changing winds, Lindblad, still in the spotlight, looks anxiously toward a future outside of the majors. It's a terrific image.

I'd like to track down some other appropriate final cards. One I can think of off the top of my head is one that everyone knows: 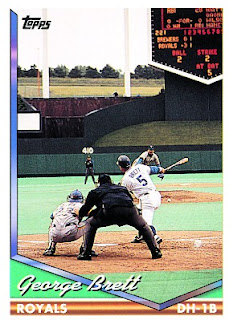 That is George Brett's last Topps card from during his playing career. I think that is simply perfect for a goodbye card.

I'm sure there are many others. Some were probably arranged knowing that it might be the player's final year. Some probably came about by accident.

At any rate, I think these cards should appear more often, as a fitting tribute for a veteran major leaguer.