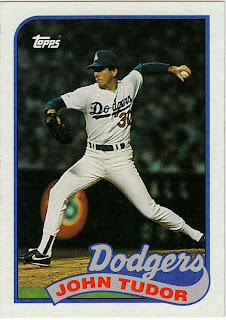 First, a public service message about the contest. If you haven't tuned in within the last 24 hours, you'll want to know that I'm giving away free baseball cards. (Free baseball cards! Is there any better word combination than that?) You may scoff at '93 Upper Deck, but I'm quite fond of this edition, and I'm giving away 15 packs worth (that's 225 cards, baby) of Series Two. They're straight from the hobby box. Not a pack searcher in sight (but, sadly, no relics either).

Here's your chance to win rookie cards of Midre Cummings, Matt Walbeck and Tony Tarasco! Or, put another way, here's your chance to win Derek Jeter's rookie card. Or cards of Barry Bonds and Greg Maddux. All you have to do is answer the two-part question in the previous post. It's fun, it's festive, and it's free cards! Just leave your guess in the comment section in the previous post. If you don't have an email address readily available in your profile, then leave that with your guess, too.

OK, on to the night card. One of the great things about the postseason is some of these night cards are nice and timely. The above card is a 1989 Topps John Tudor. Love the card. I love the 76 gas station logo on the scoreboard in the background. I have never seen a 76 station where I live, but the 76 sign at the station outside Dodger Stadium is as much a landmark there as the Citgo sign is at Fenway Park.

I believe this card is the only night card in the set. Topps had to scramble to get a photo of Tudor in a Dodger uniform because he was traded to L.A. in August of 1988 as the Dodgers made their bid for the postseason. Of course, L.A. ended up winning it all. Tudor pitched in Game 3 of the World Series but was forced to leave in the second inning because of an elbow injury that ultimately led to the end of his career.

Now, the reason this card is timely is because of this guy: 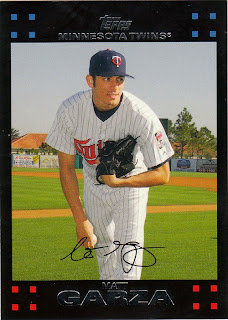 Matt Garza of the AL champ-een Tampa Bay Rays (I have a Garza card in a Rays cap, but it's that stupid Heritage card with a blurry photo of Garza's vacant stare and a photoshopped cap. I hate it, and I won't show it). Garza is scheduled to pitch Game 3 of the World Series on Saturday, just like Tudor. And although Garza wasn't acquired a mere two months ago by the Rays, he was a member of a different team less than a year ago.

Which brings me to this guy: 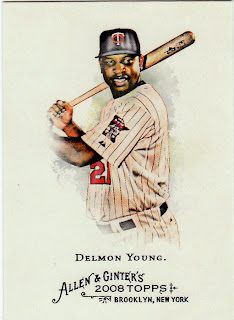 Young was shipped to the Twins for Garza. I feel sorry for him, don't you?

I'm sure some of you don't. Young pretty much paved his way out of Tampa Bay with his behavior, but that's not really my point. And some of you will say, "those are the breaks of the game. You never know when you're going to be traded." And I'll say, "True." But I still feel sorry for him. Here's a guy, drafted first overall, groomed to be a star for the Rays, and instead of playing in the World Series, he's watching his former buddies.

I got on retrosheet and did some research. I went through the transactions of each World Series team from 1988 on (cut off was the John Tudor for Pedro Guerrero trade in '88. I've got a life, man, I'm not doing every freakin' year).

The '88 trade was pretty painful for Guerrero. He'd been a Dodger his whole career and then was traded two months before L.A. won it all. But Guerrero won with the Dodgers in 1981, too, so I didn't feel too sorry for him.

There are a couple of exceptions. Carlos Lee, signed as a free agent by the White Sox way back in 1994, spent his whole career with the team until being traded to Milwaukee the December before Chicago won the 2005 World Series.

But far and away the departure that had to be the most painful was the one by Nomar Garciaparra. A Red Sox idol for years, Nomar and the team had a falling out, and he was off to the Cubs on July 31, 2004. Less then three months later, the Red Sox won their first World Series since 1918. 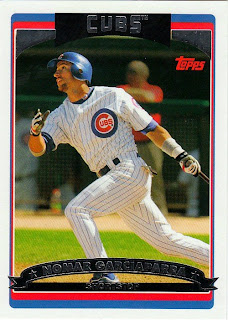 Garciaparra is still looking to get to his first World Series. You may say he's making $8 million a year. You may say Nomar and Delmon Young asked for it. But I still can't help but feeling a wee-bit of sympathy for them. Guess I'm a softie.

gcrl said…
i felt bad for pedro, but i feel worse for nomar.

Joe Martelli Jr. said…
I'll always remember Tudor for punching the fan (the motorized wind machine, not the spectator) in the 85 World Series as the Royals came back from a 3-1 defecit to beat the Tudor and the Cardinals.
October 23, 2008 at 9:36 PM