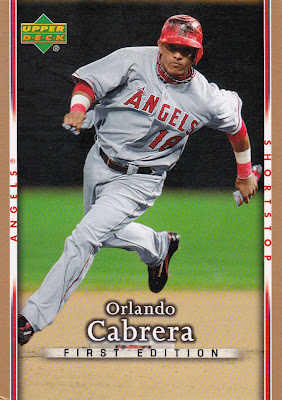 I was watching one of those ESPN-marred baseball games a couple of weeks ago. You know, the ones where ESPN feels the need to divide the game into "themes," and talk about them, whether they're related to the game or not.

I think the game was around the trade deadline because broadcaster Rick Sutcliffe started discussing Orlando Cabrera.

Cabrera had been traded from the Indians, who are in a pennant race, to the Giants, who are also in a pennant race. I don't remember exactly what Sutcliffe said about Cabrera, but I do know that I winced because he said something like this:

"Do you know why Cabrera is always on winning teams? Because he's a winner. He knows how to win."

Perfect. He wouldn't be Rick Sutcliffe if he didn't say something like that.

But as usual, I was left to figure out for myself why Cabrera is a winner, and whether the fact that Cabrera has played in the postseason for five different teams is a byproduct of Cabrera being "a winner," and how he makes all of this even possible. Because ESPN wasn't going to tell me. As far as they were concerned, all I should know is that Cabrera knows how to win and that should answer all of my questions.

I was in limbo here. I'm not a baseball-reference.com junkie. Sure, it's a great resource, but I don't really get into all the stats and analysis and puncturing of 100-year-old baseball theories. If I did, I'd probably have my answer on Cabrera.

At the same time, I have a cynical streak and the bullshit meter is always on. When someone says that a player who has been traded four times and played for nine clubs could be the reason that his teams keep appearing the postseason, I get quizzical. My brain says "tell me more."

Tell me how a guy who is just a fair hitter, a decent fielder, and a sub-mediocre playoff performer, can lead one team to a World Series title, one team into the ALCS title, and three teams to an ALDS? I mean Cabrera began his career with eight seasons with the Expos and didn't win a damn thing.

I came across an ESPN production meeting from April in which Sutcliffe says Reds manager Dusty Baker told him that when Cabrera was with the Reds, Cabrera and Scott Rolen called a team meeting before Opening Day and said, "Look, it's not so much going out there and playing well, but it's how you go out there and play."

I love it. That's funny, I thought playing well was how you win.

Sutcliffe's conversation with Dusty didn't clear things up about Cabrera at all.

I guess the question that I have is why does there HAVE to be a reason why Cabrera has played for five different playoff teams? Maybe it's just a coincidence. I'm not one of those people who thinks there is no such thing as coincidences. Otherwise, I'd walk around thinking there was plot against me every minute of the day.

Sometimes there are these things that just HAPPEN.

Lonnie Smith played in five separate World Series for four different teams. I remember this being brought up a lot, but I don't recall people saying that "Skates" played in four World Series because he knew how to win. I mean Lonnie was a major leaguer and all, but he did some wacky, "unwinning" stuff sometimes out there on the field.

Maybe Cabrera keeps appearing on playoff teams because there's always a general manager trying to figure out how to win, notices this shortstop who has been on a few pennant-winning teams, sees that the guy is available (and why is this winner always available?), and says "eh, it's worth a shot."

He can always back up the deal to the media by saying, "Hey, he's a winner! He's won wherever he's been."

Just don't pay attention to those years in Montreal. Or that year in Oakland.

There is something clubhouse-wise that makes teams not so anxious to keep him around, so when the trading deadline comes around and some team in the hunt needs to upgrade their middle infield, he's always available.

How is it that Sutcliffe always ends up on loser commenting teams? Because some guys are just losers.
August 22, 2011 at 9:29 AM