When newsprint got on our fingers 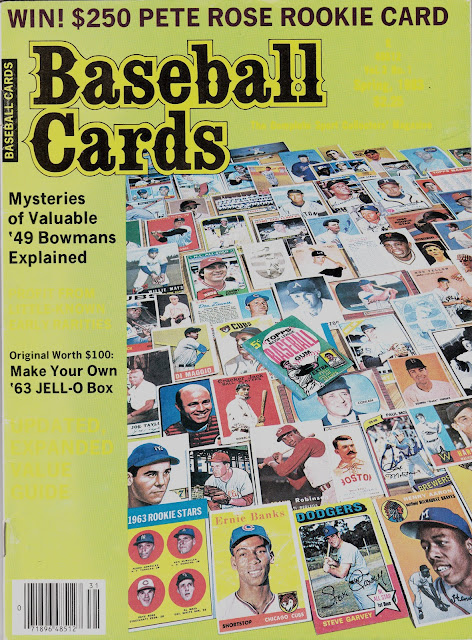 Spring 1983. The beginning of my final year of what I now describe as "my first collecting period." That period began in 1975 and lasted through late summer of 1983. I graduated high school in June of '83 and college was on the horizon. Baseball cards were slipping lower and lower on the priority list.

That's not to say I had totally lost interest. I still had Baseball Cards Magazine coming to my door!

This is the spring '83 issue and I have to say this is one of my favorite ones from the period in which I had a subscription (1982-85). There's an obvious reason for that, which you'll see in a moment.

But first, some ads, which were always in abundant supply in the magazine. You could get complete sets of '83 Topps, '83 Donruss and '83 Fleer for $36.95. I wonder how much it would cost these days. I'm willing to bet it's not much more than that.

Just about all the ads appeared in black-and-white, as did a lot of the articles. Newsprint was just a way of life back then, even for many magazines. 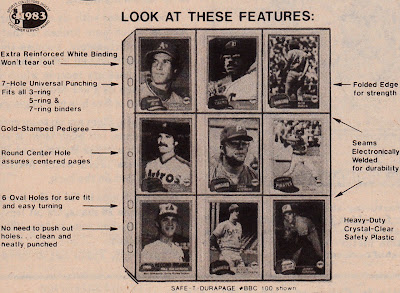 I don't know when nine-pocket pages first arrived on the scene, but I do know in the early '80s they were still a relatively new innovation. You get that general feeling from the tone of this ad. The page has so many arrows pointing to it, you'd think it was a drawing of the human body. A plastic, nine-pocket page is THAT miraculous.

This was before they knew that PVC was killing your collection. 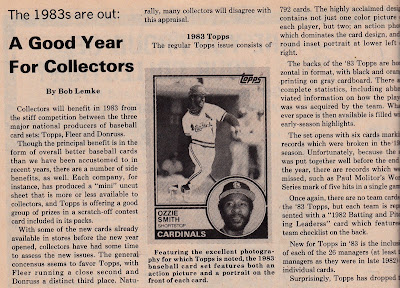 For me, one of the best parts of Baseball Card Magazine was the general overview of the sets that were out that year. I don't think the overviews appeared each year, which is unfortunate. But I loved it each time it did appear.

Editor Bob Lemke did a great job with this. Not only did he explain each set in terrific detail, from design to subsets to other new features, but he even gave an opinion on how the sets looked. 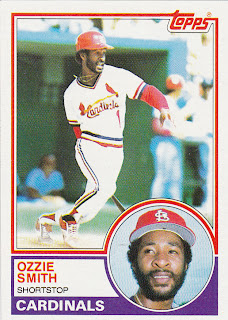 Of course, he really liked the 1983 set. From the start, everyone knew that '83 was a classic. Lemke also liked the '83 Fleer set, saying the gray border helped highlight the photo and noting the team logo, which was really the best thing '83 Fleer had going for it. Of course, he said '83 Donruss was pretty much a repeat of '82 Donruss. What else are you going to say? 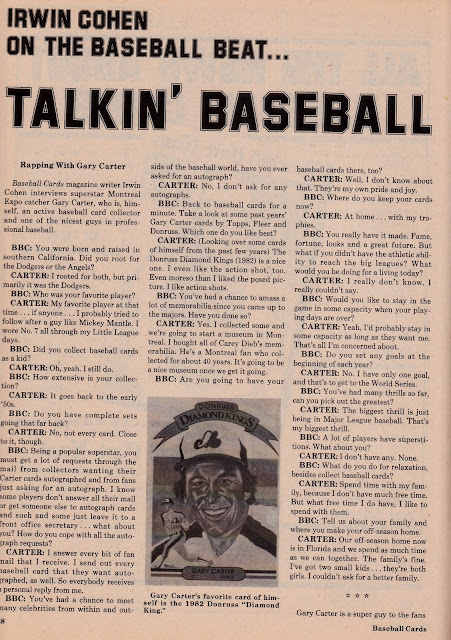 The "Talkin' Baseball" interview column appeared in almost every issue. This one was particularly interesting because Gary Carter was a card collector himself. I remember being fascinated by this.

I didn't remember that Carter thought his '82 Donruss Diamond King was his favorite card of himself. I wouldn't have traded it away if I knew that. 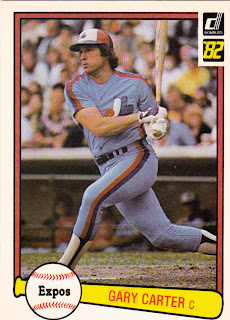 All I've got from '82 Donruss is his regular card. Oh, well. 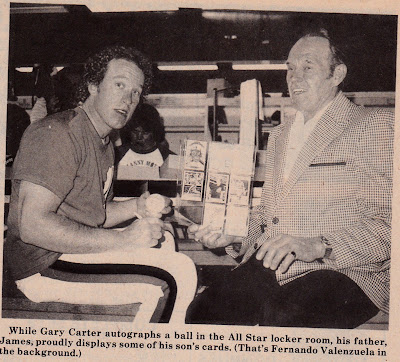 There's a picture from the magazine of Carter signing autographs next to his father. Get well, Gary! 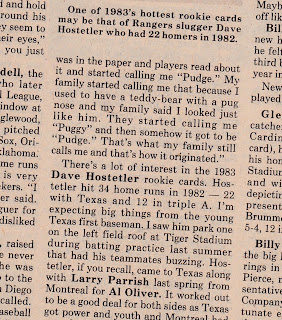 Each "Talkin' Baseball" column would have a huge section of "notes" after the interview -- just random topics about players. This used to be standard fare in sports sections in newspapers. I, personally, love notes columns and wish there were more of them.

The reason I showed this one is because it mentions how coveted the '83 Dave Hostetler rookie card was. 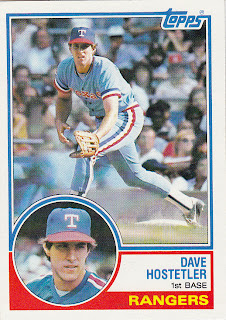 You never hear about Dave Hostetler now. His career faded away after that first big season. I remember being particularly proud I had his card and hoping for big things for him. He's a 15-cent common now. 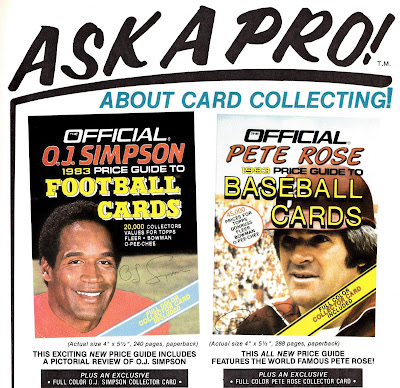 Here's a jarring ad. I don't know about you, but I'm not asking advice about ANYTHING from these two. 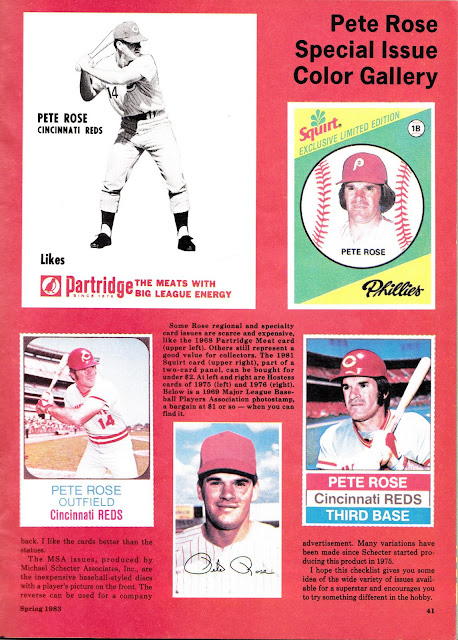 Immediately after the O.J.-Rose ad was a story on collecting Pete Rose cards. This was the issue in which you could win a Rose rookie card, which I've mentioned before in past posts on this magazine. I carefully cut out the order form you were supposed to send in, and, of course, didn't win. I don't have any of the Rose cards featured here either. 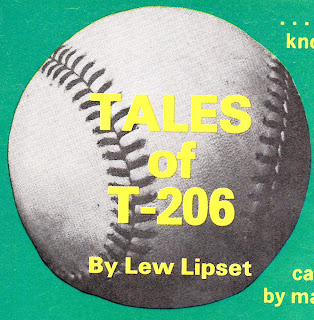 One of the best things about this issue of BCM is that all the articles were about baseball. That didn't happen all the time. They'd always find a way to slip in football or non-sports. 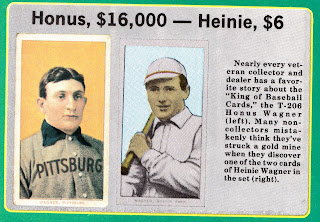 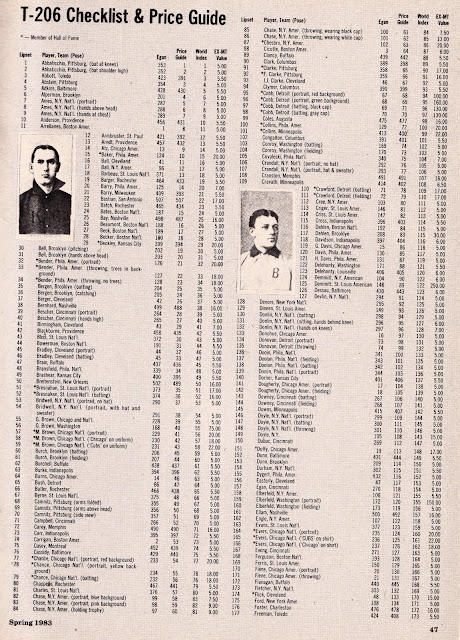 Isn't that terrific? That's the first part of the T206 checklist featured in the magazine. 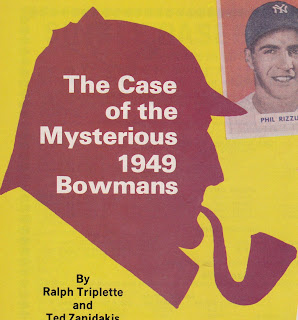 There was also a story about the 1949 Bowman set, which helped usher in the modern era of collecting. There is a full checklist that accompanies this article, too. 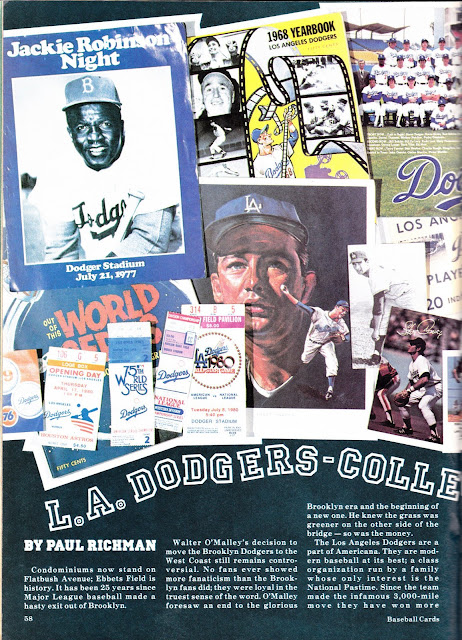 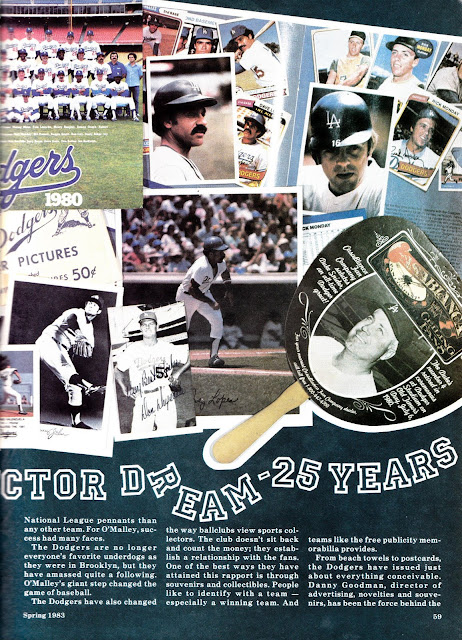 OK, here was the highlight of the issue for me. A story of collecting Los Angeles Dodgers cards and memorabilia. This was a series for BCM, as it had several other stories about collecting other teams in other issues. But I think this might've been the first one. 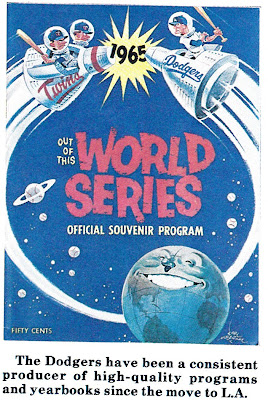 I have wanted a copy of this 1965 World Series program ever since I saw this article. I still don't have it. I do have programs from the Dodgers' 77, 78 and 81 Series trips, but they are all very generic compared with earlier programs. 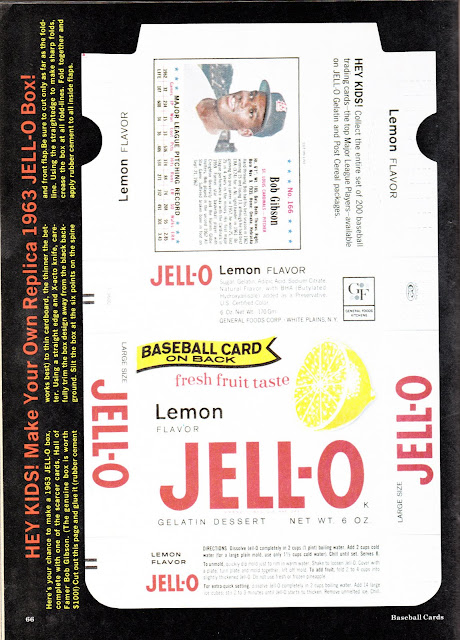 A story on the 1963 Jello set in which BCM encourages you too make your own Bob Gibson Jello box. I actually considered doing this, but was too afraid to mess it up.

For those of you collecting the set, here are the cards you may have the most difficult time finding.

Oh, and there's a complete checklist with this, too. 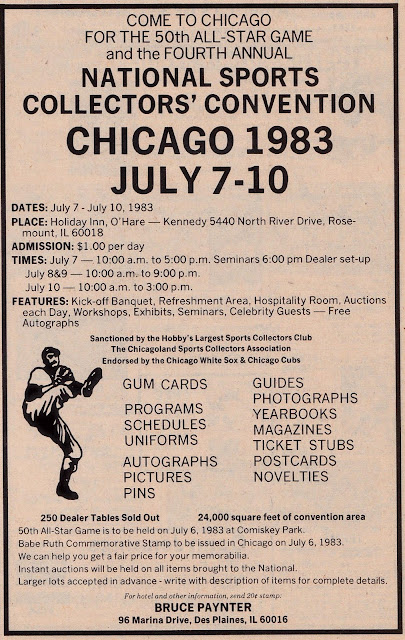 One last thing: The National is in Chicago!! So, they got the date wrong, it's still in Chicago, right?
Collecting cards for me would never be the same after 1983. It was the end of the "kid" era. I wouldn't seriously pursue cards again for another six years, and then drop it again four years after that.
But I still have the cards I collected then -- and the magazines too, newsprint and all -- and that's all I need.

Spiegel83 said…
I love these posts on old school card magazines. I wish there were baseball card magazines that just had articles. Almost like a Sports Illustrated of card collecting.
August 2, 2011 at 11:24 PM

hockey kazi said…
aahhh--those were the days--I actually still have that same issue--fun times reading it again
August 2, 2011 at 11:37 PM

Commishbob said…
Great memories right there. Looking at those old issues is a kick. I was so happy to find out that Bob Lemke was is still involved in the hobby and blogging about it. He's a card collecting Hall of Famer.
August 2, 2011 at 11:52 PM

Anonymous said…
Bob Lemke's blog is fabulous. I wonder if he is the one that suggested the magazine make insert cards? He's done quite a few on his blog.

I don't have very many old magazines any more. I got rid of most of mine years ago because they just sat in a box taking up space. Although I sometimes wish I still had them, I know that they would still just take up space. I kept a few (mostly Becketts, before they became what they are today), but not very many.
August 3, 2011 at 1:56 AM

Chris Stufflestreet said…
Aside From Lemke, Ted Zandakis and Lew Lipset are still somewhat active in the hobby. I find it interesting to see old articles from guys whose names I still recognize (as well as people I occasionally correspond with). Especially since those articles are what made me want to see my own name in a byline.

This year's show is being held across that street from where that 1983 show was (in Rosemont, not "Rosemount" as it says in the ad). The admission at the door is $20, a big increase over the $1 face value in '83, even adjusted for inflation.

The "kick-off banquet" is a relic of the past, as are the workshops, seminars and the free "celebrity autographs."

I'm working at the show this year at a dealer's table. I have found out that Bruce Paynter (organizer of the '83 show, whose name appears at the bottom of the ad) will be manning the table right behind me. I'll have to make a point of bending his ear during a lull.
August 3, 2011 at 10:45 AM