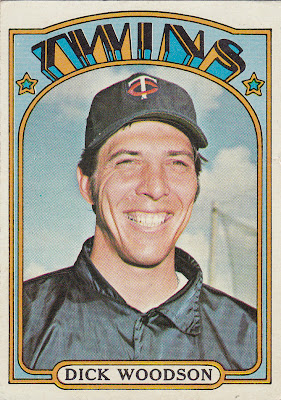 Ladies and gentlemen, Dick Woodson! He looks like he wants to have some fun.

Also, I think his name might explain why I have such difficulty tracking down his card to complete sets.

Anyway, I'm still trying to finalize the contest results here. As always, everything takes longer to finish than I expect. I hope to have the whole thing up at some point Monday. That's only a day later than originally promised. That's not too bad!

So, to tide you over until then, I'm presenting some cards sent my way from Drew's Cards. Drew lives in one of those magical parts of the country where there is a card show every month; there is something called "the East Coast National; and he has a father who is always tracking down great cards for him.

I live in one of those less-magical parts of the country where there is a card show every four months depending on how many feet of snow is on the ground; where "the East Coast National" is just far enough away that I can't go even though I live on "the East Coast"; and I have a father who is always talking about glassware to me.

So, Drew, being the great guy that he is, took pity, and sent me some wildly shaped cards!!! 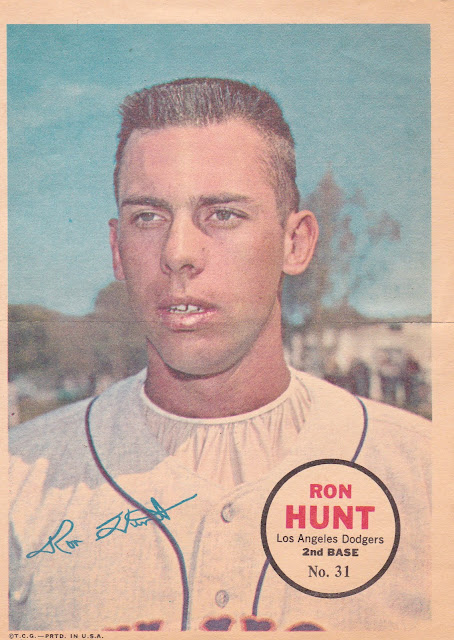 Wow, does this scream 1960s, or what? This is one of those Topps pin-ups from 1967. I believe this came from the collection that Drew's father found off Craigslist. It's basically a thin piece of paper, much like newspaper, with a blank back and a wonderful, crew-cutted individual, wearing a Mets jersey, but listed as a Dodger.

These are rather large -- hence, the name "pin-ups." Here is a comparison to give you an idea: 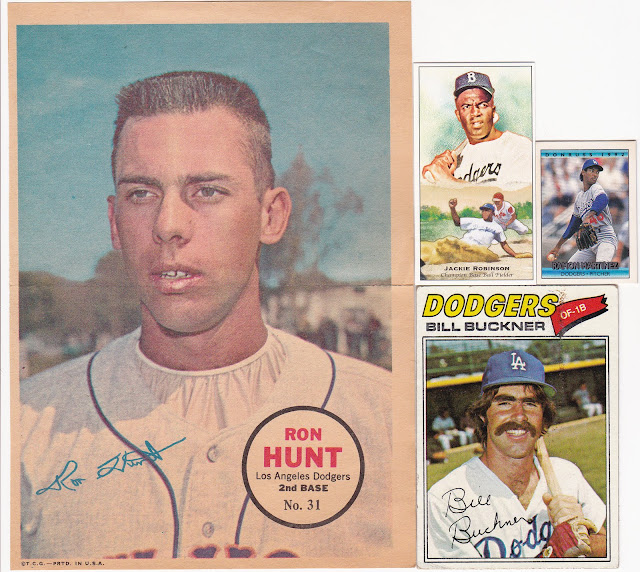 There is Hunt next to a tiny Donruss '92 Cracker Jack Ramon Martinez, a Kimball mini of Jackie Robinson, and your All-American, 2 1/2-by-3 1/2, 1977 Topps card of Billy Buck. All of these were sent to me by Drew, in an attempt -- I believe -- to give me a lesson in baseball card geometry. 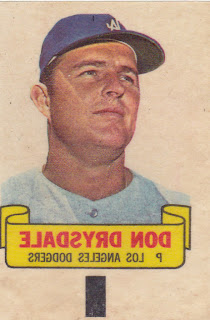 Here is a great Don Drysdale "rub-off" that he sent. This comes from the same time period as the Hunt pin-up. I picked up the Sandy Koufax "rub-off" a year ago. They are super-flimsy and don't meet any definition of a card that I know of, but I gravitate toward anything from the '60s or '70s.

The rub-off is smaller than an average baseball card. But I'll let Drew demonstrate it for you: 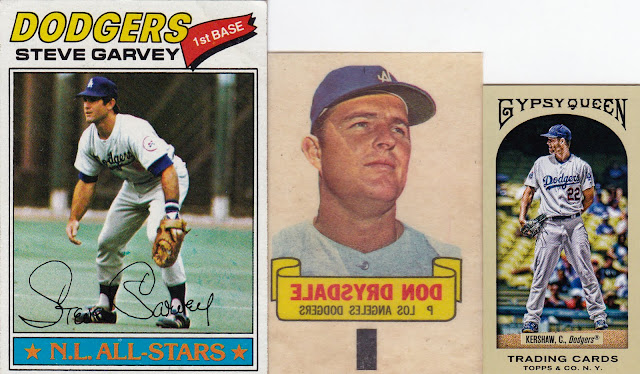 Once again, all of these are from Drew (I am very appreciative of the regular-back Kershaw GQ mini). The Garvey card is average card size.

By the way, I love my new expanded layout. It's much easier posting, looks better, and still keeps the Night Owl feel. Hoooooooooott! 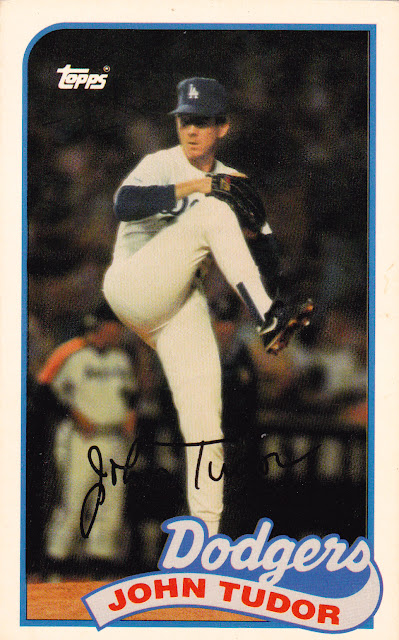 Most of you probably know what this is. But I'm guessing there are others who are thinking "I don't remember the 1989 Topps John Tudor card looking so tall."

Never fear, puzzlers. This is a 1989 Topps Talk card. And what is cooler than a Night Card that talks? The card has a "record" on the back that reveals a message if you have the specially made record player designed for these cards. I don't have the record player. I never did.

The cards are also larger than an average '89 Topps. Another demonstration: 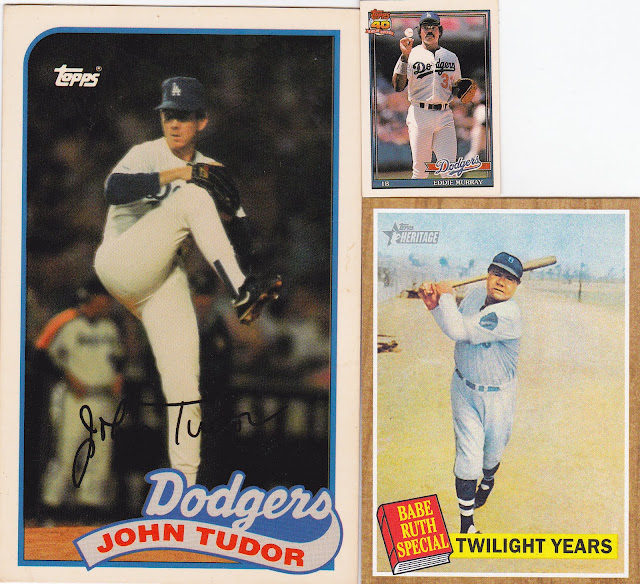 Drew sent me a Boston Braves Babe, from this year's Heritage. You can see it next to a teeny, tiny Cracker Jack Eddie Murray and the Topps Talk Tudor. 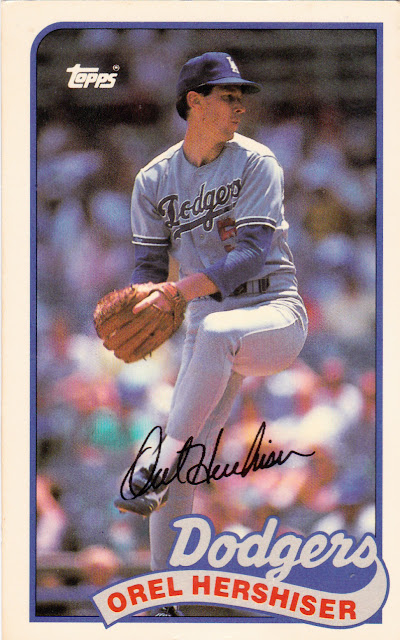 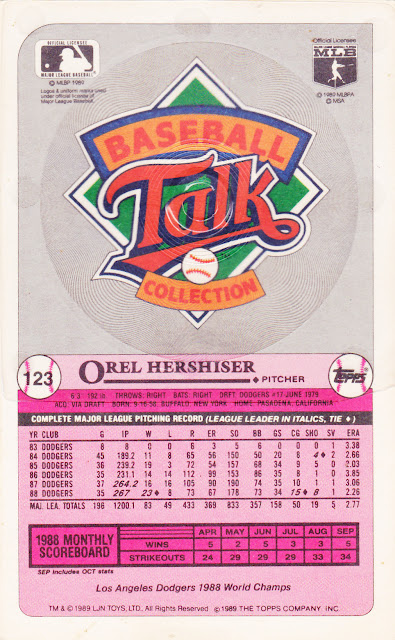 Someday I'll nab one of those record players. 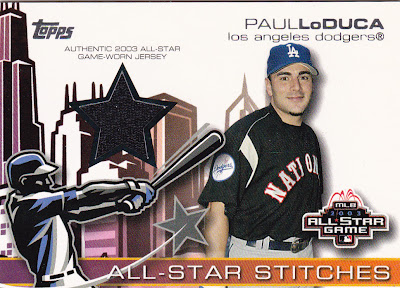 Drew also sent your common, average-sized card, too. Here is a Paul LoDuca relic. I'm sure Topps got a great deal on All-Star Workout gear five years ago or so, and that's why we had so many of these "All-Star Stitches cards." 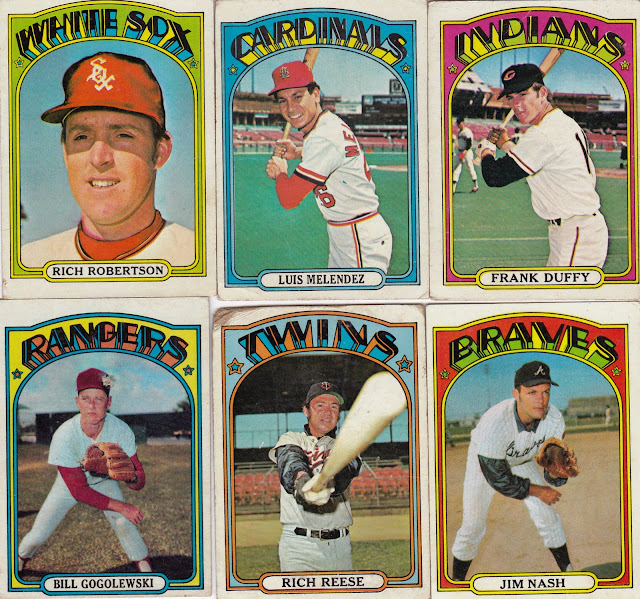 Here is my favorite part of the package. Cards for my 1972 Topps pursuit! Yay! I'm not too particular about condition with the '72s, although I'll probably upgrade Gogolewski, who looks like he took a shot to the head, and Reese, who may have clubbed his own card with his bat. The rest go straight to the binder! ... Well, after the whole recording process anyway. 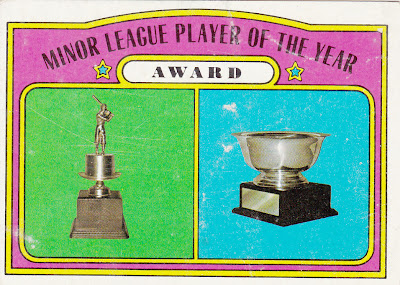 My truly favorite card of the whole bunch. The randomness of Topps inserting a bunch of trophies in the middle of the 1972 set is just too funny. And Minor League Player of the Year? Was there anyone in '72 that really cared about the minors? Very few prospectors in those days.

The back is interesting, too, as it lists all the Minor League Players of the Year to that date. Here they are:

Only Tiant, Millan and Grich really made an impact, although there are a lot of players there who were famous for their potential, long before that became a profitable trait.

I love eclectic card packages like this. Great fun.

Drew said…
Glad you liked the cards Night Owl! And yes, although I'm not a geometry fan, I thought it would be cool to give you a nice variety of stuff. Enjoy em!

Chris Stufflestreet said…
Take a closer look at that Minor League trophy card. Those two trophies are the Rookie All-Star trophy and the "cup" design that would replace it in '73. It was the first glimpse collectors would get of that change.
August 22, 2011 at 8:31 PM

night owl said…
That's pretty cool, Chris. I guess I didn't recognize them without the word "Topps" across the bottom of each trophy.
August 22, 2011 at 10:12 PM

Anonymous said…
I'm going to plagiarize the "please note" comment when I get off the retro train and back onto the Topps project for 1990.