The card that drew me in 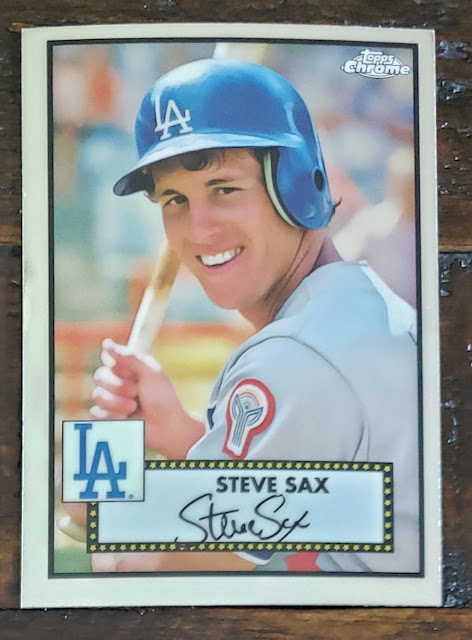 This is the card that drew me in to the 2021 Topps Chrome Platinum Anniversary set.
I was minding my own business wandering through ebay one day when the card popped up all renegade-like on some unrelated search.
"Steve Sax?" I said to myself. "A card of Steve Sax? A shiny card of Steve Sax?" What is this?
I knew it was new but I had never seen it before. The fact that it was a card of Sax erased all other previous thoughts I would have had of this set -- "phooey, it's another 1952 Topps design, phooey, it's more shiny for shiny's sake, phooey, how many rookies are in this thing?"
But I didn't think any of that. All I thought was, "what the heck is this set?" and "how do I get this card?" 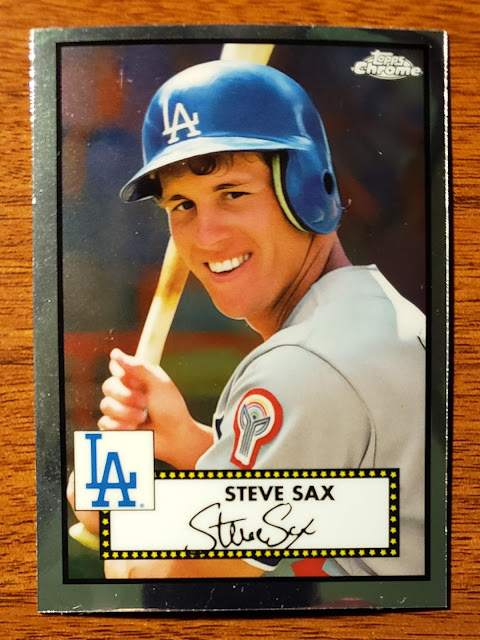 About a month later, I received an envelope with that very Sax card. I didn't even need to buy it myself. It came from, I believe, reader Grant, who doesn't like putting his name on envelopes.
I know a card like this, a set like this, goes against what some people think I like. When I did buy a blaster box of Chrome Platinum, I received a couple different responses, on a couple different social media sets, saying they were surprised I'd be interested in something like this.
I know I probably contribute to that particular view, but really I DO like new and shiny stuff. It's been an interest of mine for the length of this blog. Sure, I don't get into as often as I did 10 years ago, but if it's made reasonably well, I'm probably going to be interested.
The best part of the Chrome Platinum set, to me, is the retro players in it. Yeah, there's a bunch of same-old vets we see too many times, but there are others, too, like Sax. Eric Gagne and Maury Wills and Tommy John are in this set. So is Fred Lynn, Tim Wakefield, Steve Rogers, Lee Mazzilli, Dave Stewart and Vida Blue.
It's not perfect. I've already mentioned the rookie plague. And some of the team sets, like the Dodgers, Yankees and Mets are enormous, while teams like the Royals and White Sox get ignored (but maybe that's a good thing for those team collectors).
But it's interesting enough that I'm considering buying another blaster box (more gift cards you know) and -- yes, I guess you do have me sized up correctly -- I'm really not the kind anymore to be buying repeat blasters of current product. 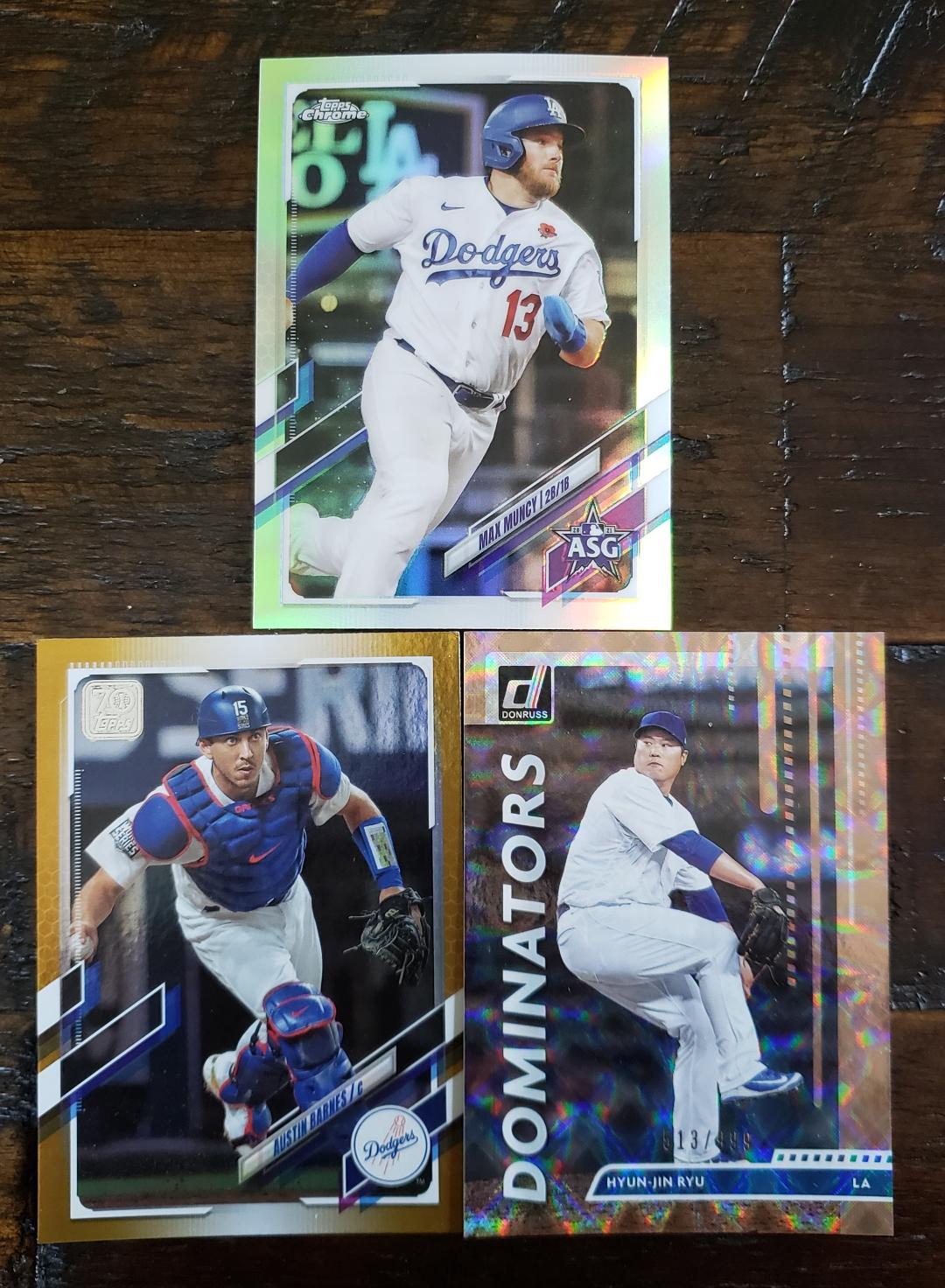 Grant also sent me a few other shiny Dodgers needs. He also sent me an expired redemption for a 2013 Hyun-Jin Ryu rookie autograph. I don't really know what to do with it or even what Grant's annoyed note aimed at Panini means, but I'm probably not adding it to the team binder. 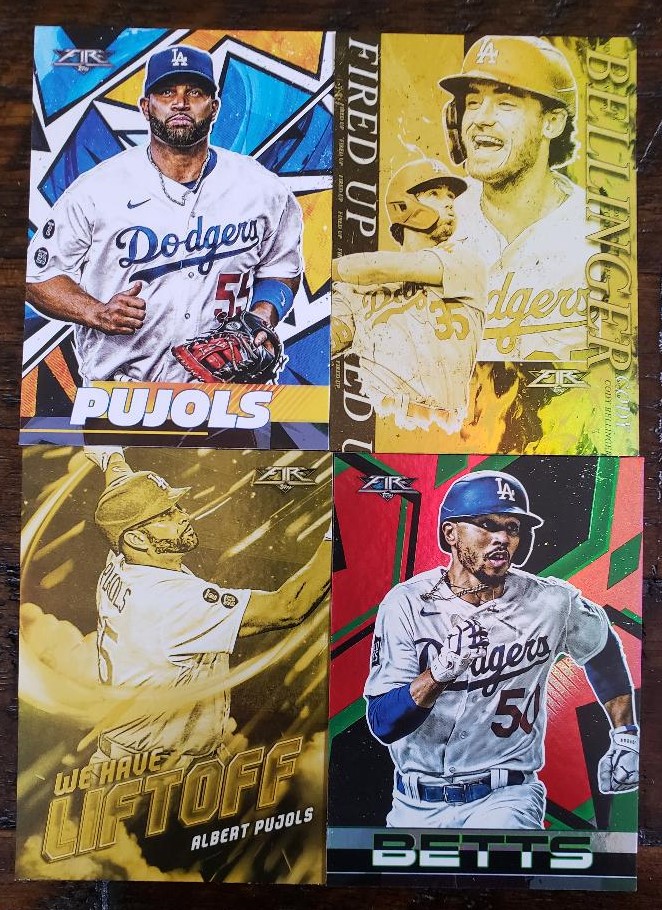 I'll throw in some more modern Dodgers that I received from another reader, Dana. He was nice enough to send some Fire (no, I didn't mean it in that terrible way that some collectors describe cards they pulled).
I especially appreciate the Pujols Dodgers. Anyone who has a longtime all-star suddenly arrive on their team knows how difficult it might be to find cards of this player weirdly wearing your team colors. Player collectors don't care about the laundry and swoop up anything with the name Pujols-Jeter-Ichiro-etc. Also, the card in the top left corner completed the base-set Dodgers for me! 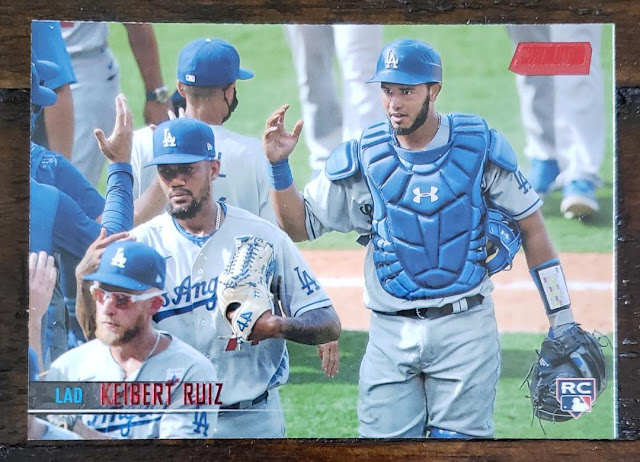 Here's another card of a Dodger-No-More. Red parallel version.
Maybe you'll see another break of 2021 Platinum Anniversary on this blog. We'll see. And I'm not going to apologize for it.
Because I did spare you showing that blaster of Topps Series 2 I bought.

John Sharp said…
The shiny card set has mu guy Matthew Boyd in it, as well as "old guys" Alan Trammell and Al Kaline, and, I'm gonna need that Ruiz card for my catchers card binder.

Shlabotnik Report said…
I originally dismissed this because of sets don't get more "meh" for me than a delayed 2021 set made up of shiny 1952 cards... but then I found out there are players who don't appear elsewhere with the depicted team (Mallex Smith, Ashton Goudreau) and Lee Mazzilli also caught my attention. Don't know what I'm going to do about it, but I'll do something.
August 18, 2022 at 7:51 PM

Johnnys Trading Spot said…
I have finally completed my 35 card Braves team. The last few are sitting in my Sport Lots box or enroute from Comc not sure which. Either way it is finished. I like the set too.
August 18, 2022 at 7:59 PM

Bo said…
Would be fun to see a new card of Sax as a Yankee. He was their best player for a year or two there. The patch on his sleeve looks like the villain's mask in some low-budget sci-fi or horror movie.

Looks like the Yankees have the usual suspects for the "vintage" players, but Soriano and Wang are nice to have new cards from, if a little recent.
August 19, 2022 at 10:06 AM

night owl said…
The patch is from 1981, Sax's rookie year. I remember seeing it a lot as they were in the WS that year. It's for the bicenntennial of the city of Los Angeles. I believe it's an angel (City of Angels) with a rainbow above.
August 19, 2022 at 10:41 AM

Nick said…
I give Topps a lot of credit for throwing a bunch of ignored legends in the Platinum checklist. I've been buying them here and there on Sportlots since it came out - when's the last time I was able to say I got a new card of Lee Mazzilli?
August 19, 2022 at 7:13 PM

Anonymous said…
Actually I want to hear about the Topps 2022 series 2 blaster!