The card-eating chair and other binder follies 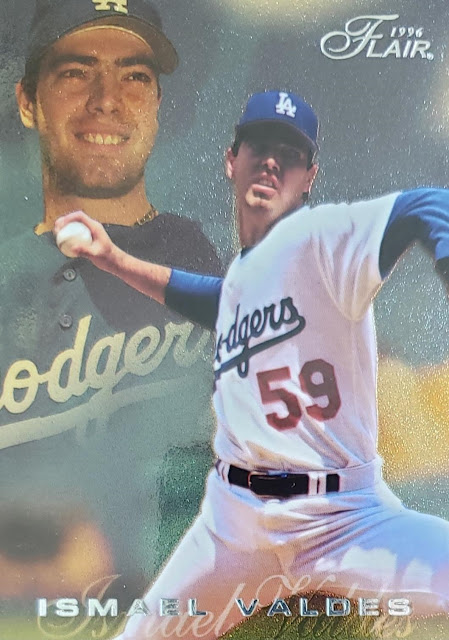 I've been updating my Dodgers binders the past couple of months. It's a process and I'm limited to doing it on days off, which sadly come around only twice a week.
Usually, I will update the binders while watching a baseball game, often in the evening. I set up shop at the recliner in front of the TV and get to it. It's joyful busy work and the game prevents it from getting tedious and keeps me going.
The recliner is getting old. Because of its location in front of the TV, it's been used a lot. When my daughter lived at home, it was her designated spot in the living room, where she'd watch her youtube shows or play video games after doing homework. I took over the chair after she went off to college. Only family should be sitting in it. The dog couldn't keep off of it and, well, in his older days, things got ugly.
So last night I was sitting there updating my binders. I wasn't watching a game because the only thing on was ESPN's 7 millionth Red Sox-Yankees telecast and it had warned me last week exactly how terrible it would be by joyfully advertising that it would have some sort of Jeter-ARod-Michael Kay podcast airing while the game was going. Good gracious, how much would you have to pay me to watch that?
So with nothing to distract me from my binder, I was happily updating the 2009 portion, the OPC black-borders to be specific, when one of the mini cards slipped out of my hand and fell between the chair arm and the cushion. I didn't catch it in time.
I did the usual, rooted around under the cushion a little bit, then got on the ground and looked underneath. Got out the flashlight. Then I came to the conclusion: I think the chair actually ate it!
I didn't know what card it was but I couldn't bear the thought of it residing inside the chair for the rest of its days. So I tipped the chair upside down in hopes of shaking it out. Well, all kinds of unexpected things came out, but not the card.
I put the chair back on its legs, defeated. I checked between the cushion again. Then I looked underneath the chair again. Wait ... there was something ... but it was round. Huh?
Just as I was reaching for the round thing, my wife announced, "I think I found it." That's when I pulled out this: 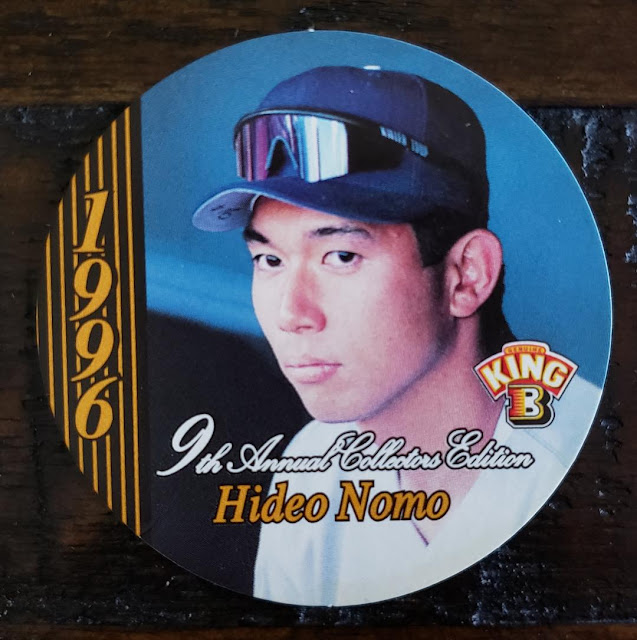 And I said, "I found a card, too."
Little cards like this are notorious for slipping out of a stack you're inputting into a binder.
Then I looked up at my wife who was holding up this card: 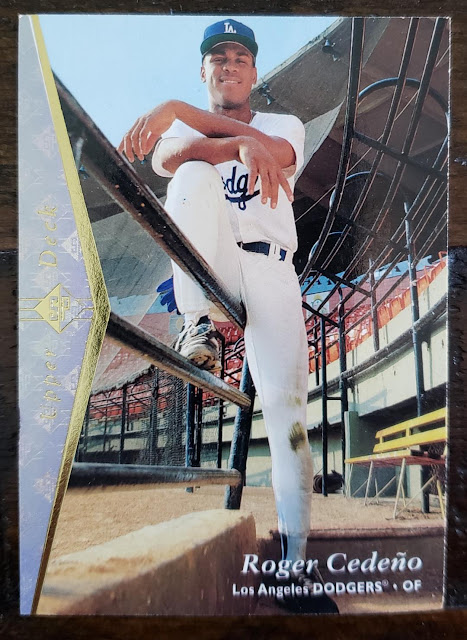 That's not a 2009 OPC card! Neither of those are 2009 OPC cards!
"Where did that come from?" I asked my wife. "It just fell out of the chair just now," she said.
For crying out loud, that's two cards that escaped the binder update -- the mid 1990s portion was weeks ago! -- and I still hadn't found the OPC card. (I actually had to add the Nomo card to TCDB, which means it has been inside the chair for at least months).
I shoved my hand into where the card had gone one last time. That's when I felt something cardboardy and pulled out the card: 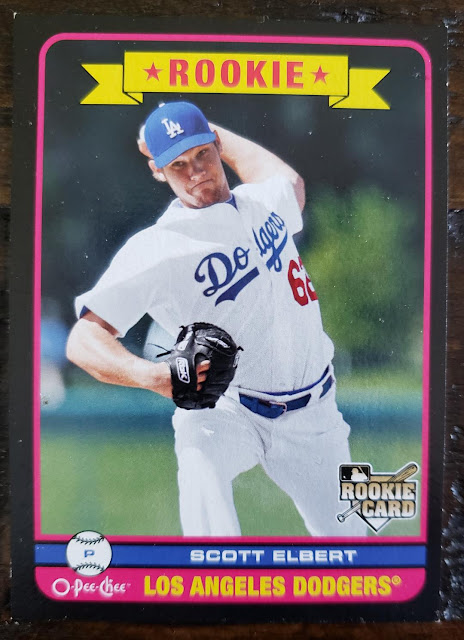 That was a lot of work for a Scott Elbert.
But I was relieved to find the card and also relieved to see I hadn't folded it in half with all the reclining/unreclining/chair tipping.
So I resumed binder updating and I then took the Cedeno SP and Nomo King B cards to put them in the too-be-updated-next-time stack, which always accumulates during an update session due to misplaced cards or newly arriving cards.
A few other mid-1990s cards that arrived too late for the update were several cards I received recently from Dennis of Too Many Verlanders.
He sent a bunch of cards from 1996 Flair. He mentioned that my TCDB list showed that I needed several of these. I admit I have a lot of difficulty keeping up with mid-to-late '90s cards, especially with the endless variations. The '96 Flair set features two different versions. There are gold-letter versions with silver backgrounds and silver-letter versions with gold backgrounds.
I didn't know this until I got to '96 Flair when I was updating the Dodgers in TCDB. Thank goodness Dennis checked the TCDB wants and not the ones on my blog because the blog ones reflected what I thought originally about that set -- that the difference in the gold and silver backgrounds was just random through the base set, much like1996 Collectors Choice had cards in the base set that looked different from other ones (the border/no border thing).
So that portion of my Dodgers binder has been a mess for years. Thank goodness Dennis and TCDB straightened me out, but it's going to have to wait until the next round of binder updating, which probably won't happen until maybe October.
Here are the gold-letter/silver-background cards I received: 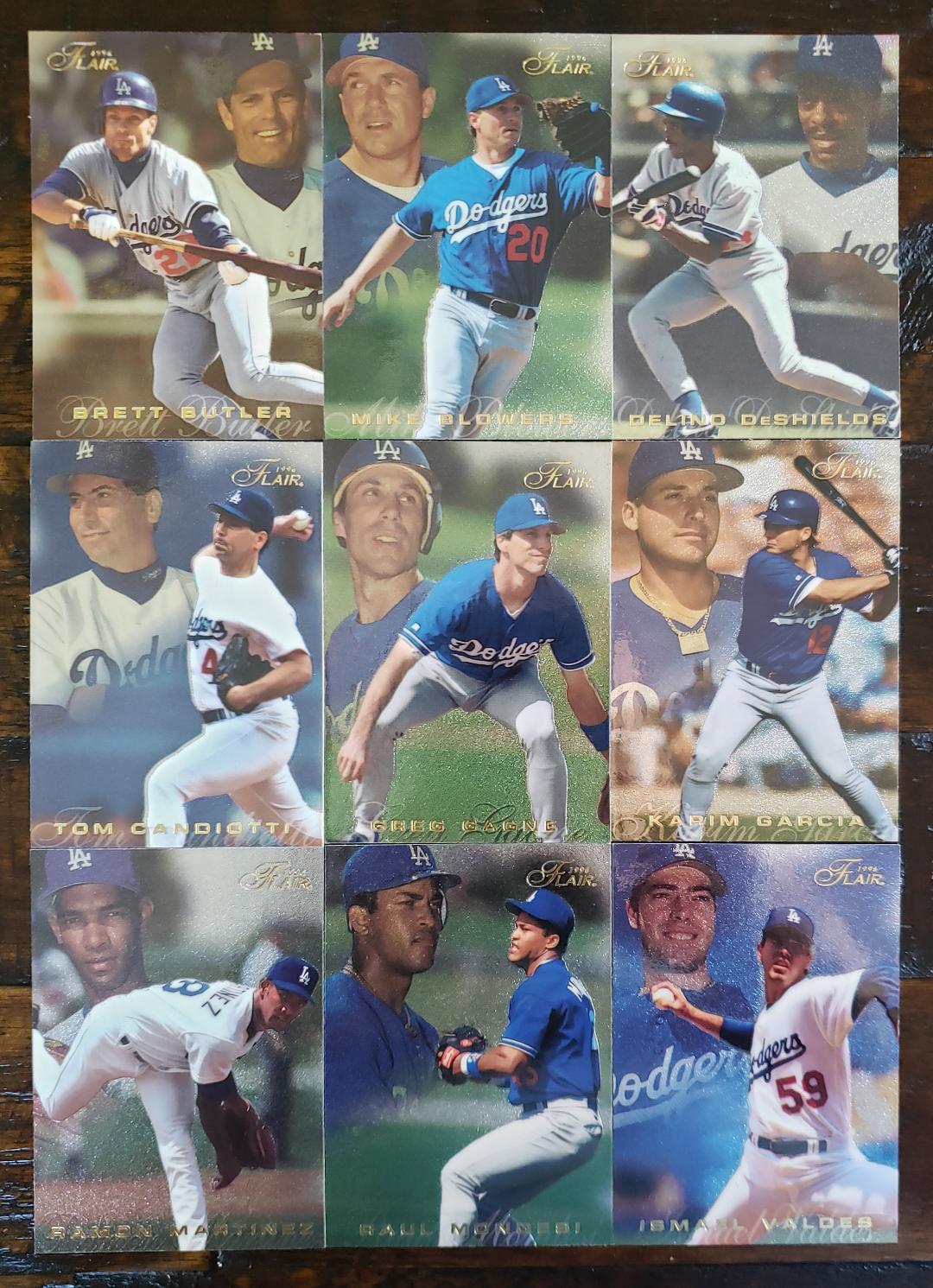 And here are the silver-letter/gold-background ones: 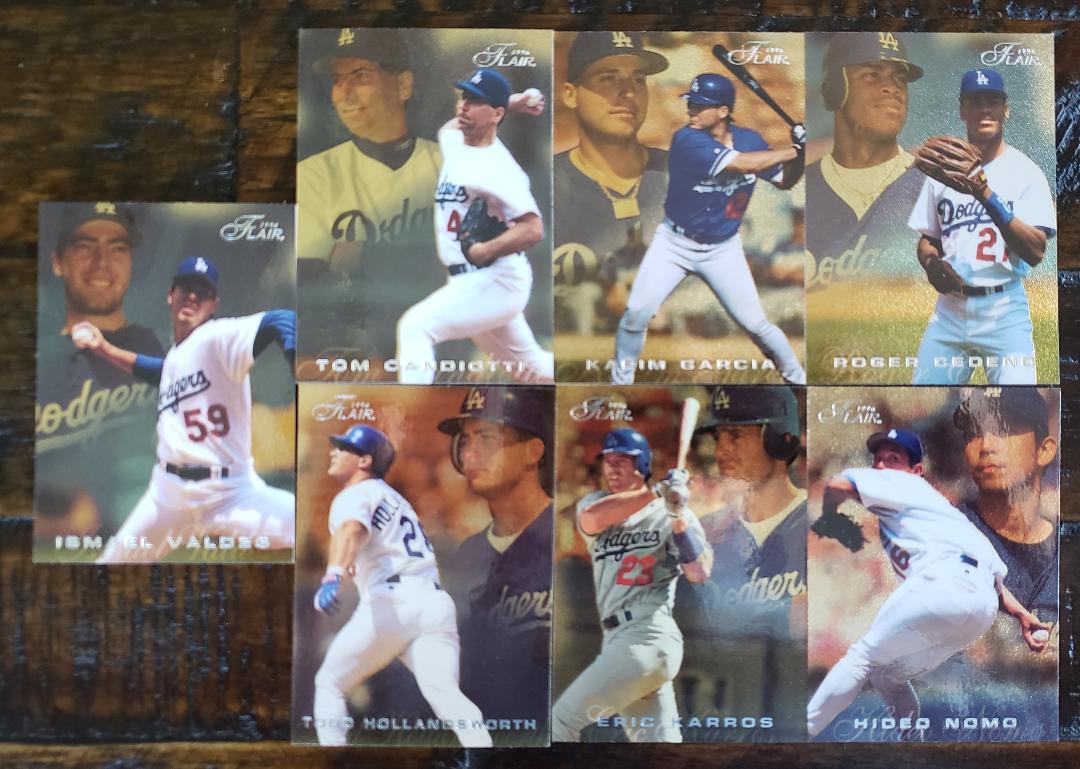 And, yes, I now finally know what I need in this confusing set. 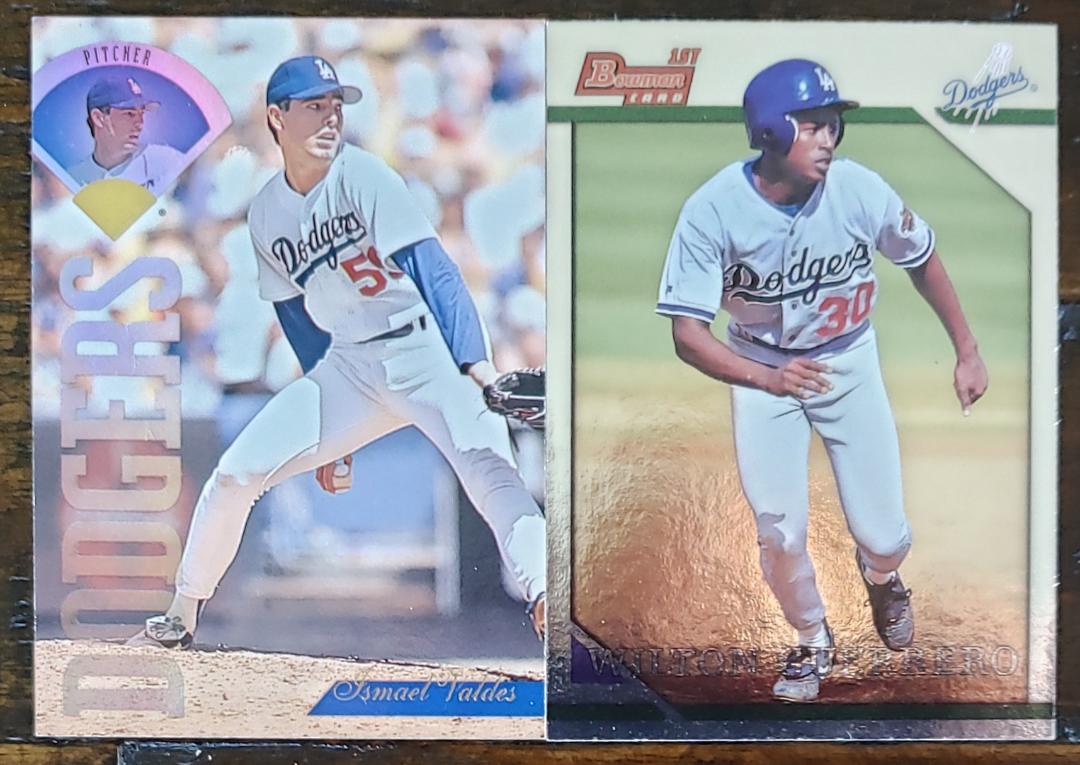 A couple of other cards from Dennis from the same time period -- not nearly as confusing -- that will also have to go in the "until-the-next-binder-update" pile.
I know my binder update system is a lot of time and effort, but I don't have the space or knowledge to leave spaces where missing cards will go and I have no desire to reserve certain binders for certain brands or anything like that.
Actually this method of binder updating is a good calming device and relieves anxiety, it's basically my version of mediation.
Everything's cool. Normally. Except when the chair gets hungry.

Dennis said…
That's funny that you just posted this today because I also received your package this afternoon! Thanks and I look forward to showing it off soon :)
August 15, 2022 at 7:08 PM

Brett Alan said…
I know the feeling. I've got a late Kellogg's set that currently is missing a couple of cards. I'm pretty sure that because they're bent, I put them under something to try to flatten them out. At some point I'll figure out what they're underneath.

John Sharp said…
I also do binder work while watching a ballgame, albeit in my bed, and not in a recliner.

Jon said…
I'm really surprised that that Nomo still looks so sharp after having been either in or under a recliner for so many months.
August 16, 2022 at 8:22 AM

Bo said…
I've been putting my dupes into TCDB, which is how I recently found out about those Flair variations.
August 16, 2022 at 10:06 AM

I too sort cards in a recliner in front of the tube.

They fall off or I drop them.

I then have to get up and out of the chair, lean it forward, shake it a bit and the cards tumble to the floor.

It's good to see I am not the only one with a card eating recliner.

Jafronius said…
My youngest lost a Nintendo Switch game (they're the size of SD cards) in his grandfather's massage chair back in 2019. I was tipping and unscrewing parts of that thing to no avail. The grandparents moved to a new house a year later. Last summer, the massage chair spit out the game and the boys found it next to the chair on one of their visits.
August 17, 2022 at 7:59 AM