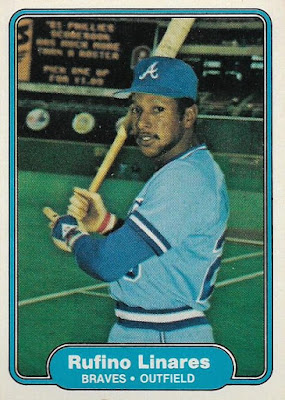 OK, making very modest progress on attempting to put this series to bed. This is the second edition of this series this year, improving on my one-per-year schedule from the last few years.
But still got quite a few sets to get through as I travel backwards through the sets I've completed.
The last set I covered was 1983 Fleer, and now it's '82 Fleer's turn. This is where I determine the "Team MVP" for each team in a particular set, what I think is the best card.
I bought a fair amount of Fleer in 1982. Like in 1981, I was attempting to collect all three sets, which was foolishness for someone on a paper boy's salary. But that's all I knew. I ended up with somewhere around 300 cards in the set, but it was enough to get an idea that the set was not well-photographed nor cropped all that great.
However, I like the set a lot, for the color-coordinated borders, the extremely weird and interesting photos and for providing a solid look at the day in the life of a major league ballplayer -- which sets today do not do at all. Thank goodness for 1980s Fleer.
All right, the Team MVPs have been arranged and grouped to reflect the division alignments in 1982. Let's go.
American League East 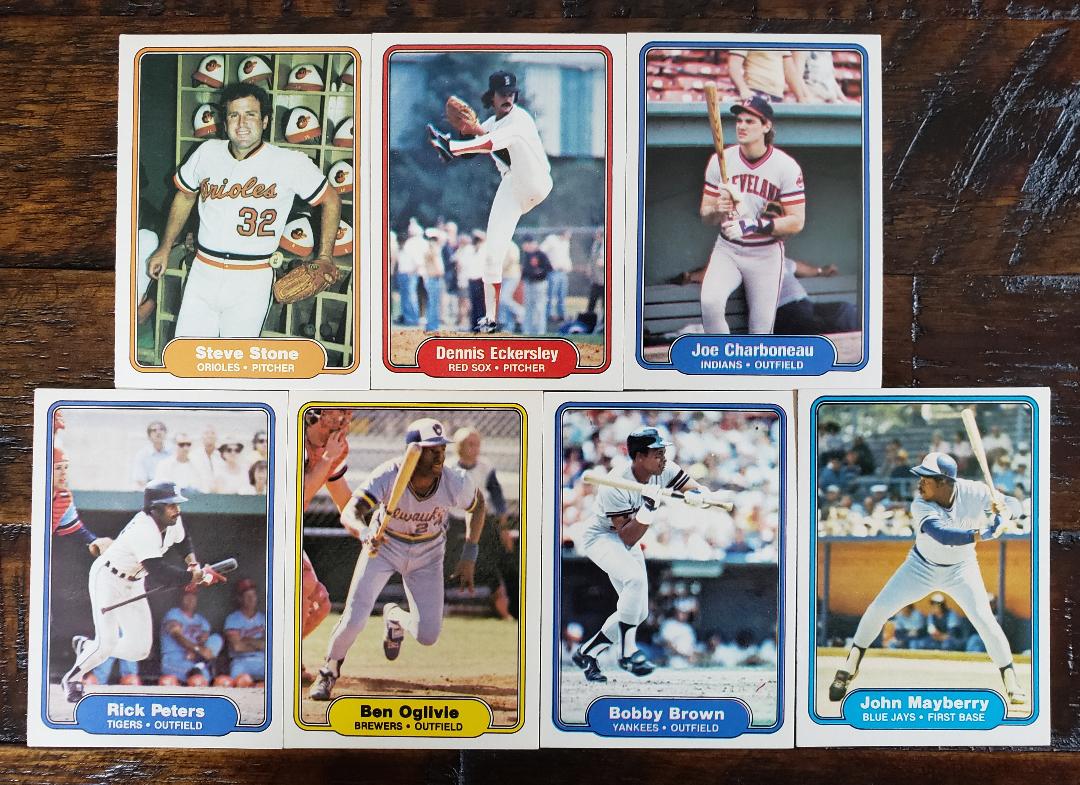 Orioles: Steve Stone; Red Sox: Dennis Eckersley; Indians: Joe Charboneau; Tigers: Rick Peters; Brewers: Ben Oglivie; Yankees: Bobby Brown; Blue Jays: John Mayberry
Team with the best cards: Orioles.
Team with the worst cards: Tigers, not too exciting.
Team I should go back and check again: Yankees. The Yankees have some pretty good portrait/candid shots in this set -- I really like the Aurelio Rodriguez card -- but I went with one of the few action shots the team has.
American League West 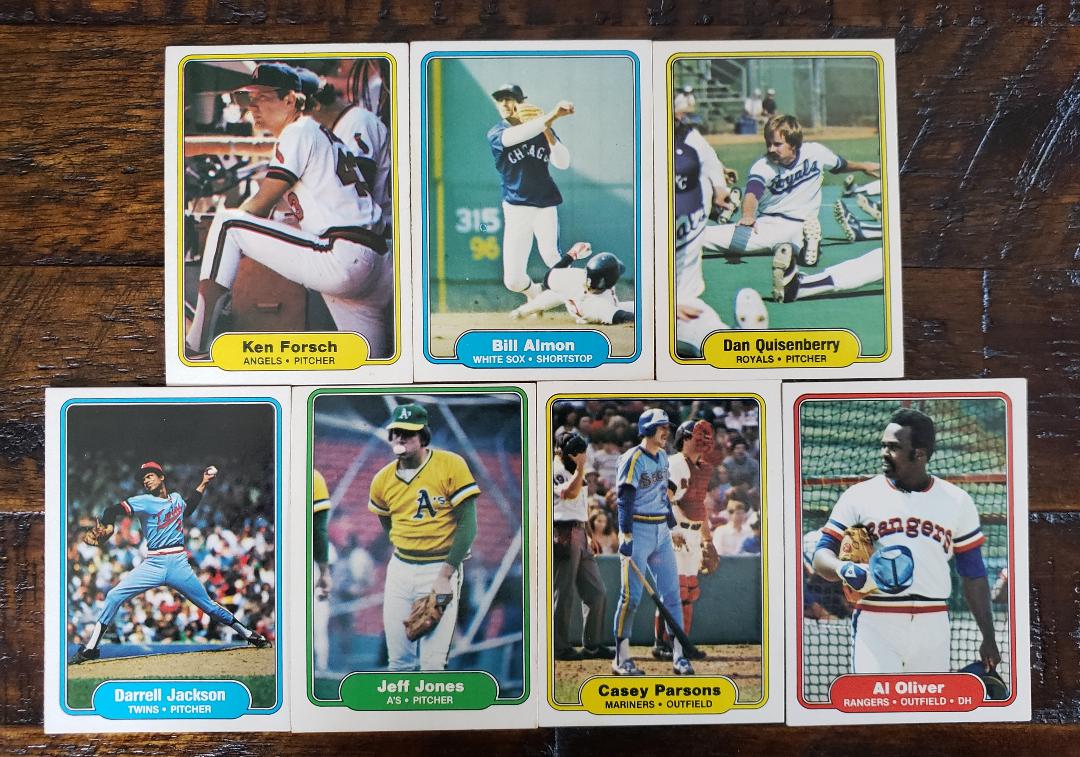 Angels: Ken Forsch; White Sox: Bill Almon; Royals: Dan Quisenberry; Twins: Darrell Jackson; A's: Jeff Jones; Mariners: Casey Parsons; Rangers: Al Oliver
Team with the best cards: White Sox. I really like the old-timey uniforms with the blue borders in this set. The Almon card, and any card from this time period where the White Sox player is pictured with a player from another team, is a favorite because I love how the two players seem to come from different eras, like there was some sort of time travel collision.
Team with the worst cards: Angels.
Team I should go back and check again: Rangers. The John Ellis is a classic catcher's stance but I really like the idea of Al Oliver gathering up all his equipment preparing to go into the field.
National League East 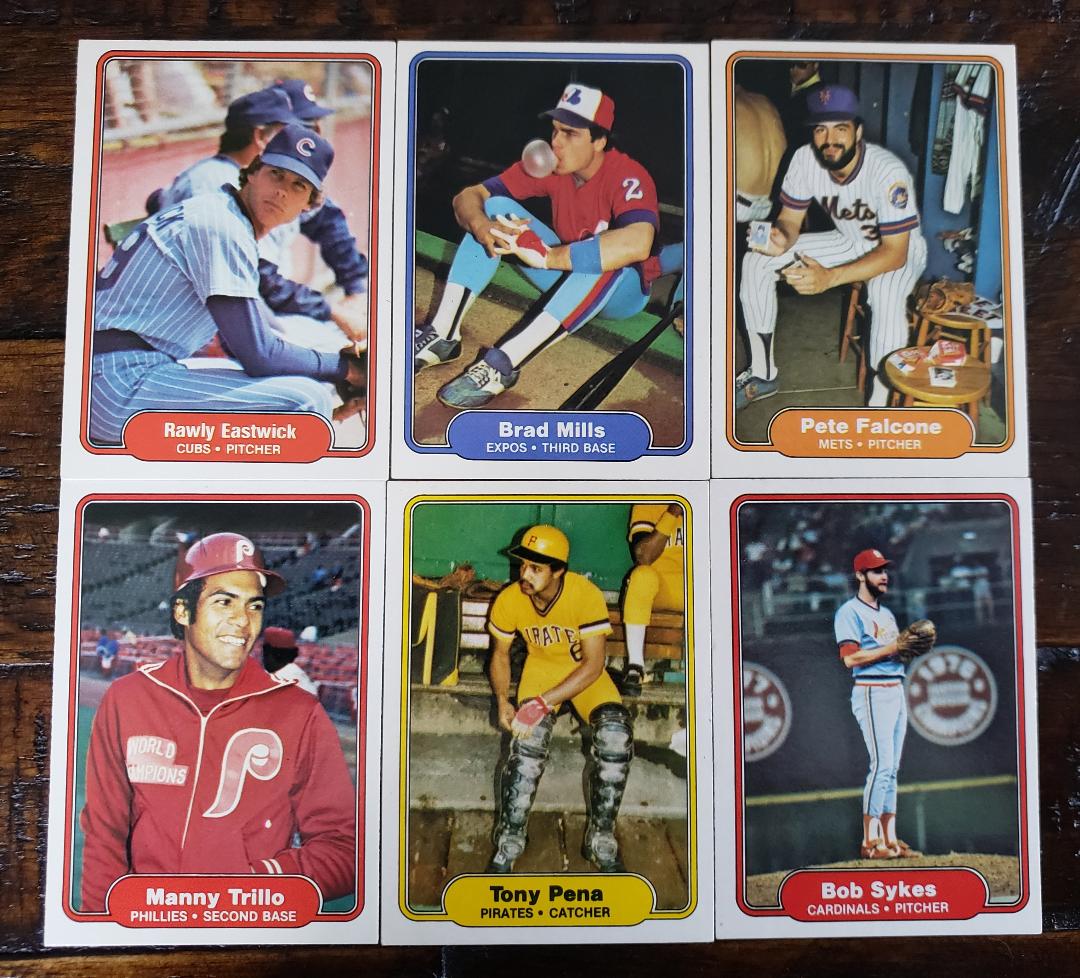 Cubs: Rawly Eastwick; Expos: Brad Mills; Mets: Pete Falcone; Phillies: Manny Trillo; Pirates: Tony Pena; Cardinals: Bob Sykes
Team with the best cards: Pirates. The best in the entire set. The very nice Steve Nicosia-blowing-a-bubble card is probably the third-best card in the team set. Meanwhile bubble blowers are the Team MVP for the A's and Expos.
Team with the worst cards: Phillies or Cardinals.
Team I should go back and check again: Expos or Mets. Two classic cards for each overwhelmed everything else.
National League West 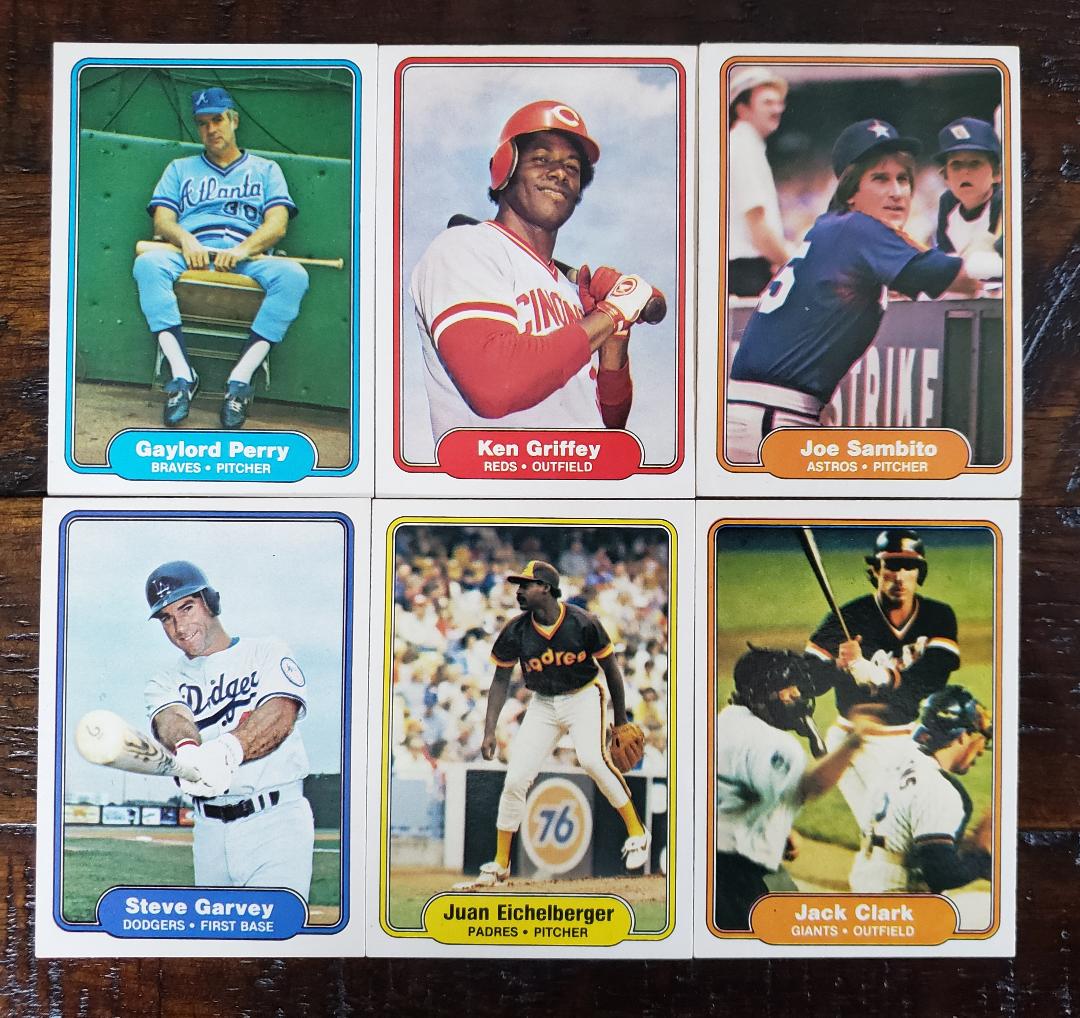 Braves: Gaylord Perry; Reds: Ken Griffey; Astros: Joe Sambito; Dodgers: Steve Garvey; Padres: Juan Eichelberger; Giants: Jack Clark
Best: Braves, but that Perry just bullies its way in.
Worst: Reds aren't very interesting.
Team I should go back and check again: Giants. That Jack Clark is awesome but I am stunned that Fleer chose a photo of the player receiving a strike call, in no uncertain terms, on the player's OWN CARD. Maybe I should've gone with that Greg Minton staredown.
So there you are. I did finish the 1982 Fleer set last year -- no, I didn't bother with all the error cards.
Up next, either Fleer again, in 1981 or maybe Donruss' debut. Gonna try to get to that before the year is through.

Nick said…
Seeing posts like this make me wonder how anyone could dislike '82 Fleer. It definitely has its flaws, but it's just such a lovable set. Jack Clark and Quiz are two particular favorites of mine.
August 16, 2022 at 7:57 PM

jacobmrley said…
Oh, that Pete Falcone. I remember that one from my childhood and thinking it was so weird and awesome. But how have I gone 40 years having never seen that Jack Clark card? Excellent choices all around.
August 16, 2022 at 8:18 PM

bryan was here said…
'82 Fleer had so much potential. Simple, clean design, ruined by blurry photography. The Star Stickers player stamp strips feature better, clearer photographs. Over time, that set has grown on me.
August 16, 2022 at 8:52 PM

Brett Alan said…
I have somewhat of a soft spot for this set, but when even some of the "best" selections are poorly cropped--Charboneau and Peters in the first group, I'm looking at you--that's a problem.

Doc Samson said…
I actually remember when this set came out (yeah, I’m old.) This grocery store near my house kept putting boxes near the cash register and all the kids begged their parents to buy them a pack. The grocery store actually ran out of them!

Overall, I actually like this set. Especially the clean, simple design. As for the photography, it’s obviously blurry quite often, which is a shame. Some interesting poses and angles among the haziness.

Nick Vossbrink said…
Not a great set but has the right pieces that when everything falls into place the cards are great. Plus the simplicity of the border helps the informal nature of the photos. The Jack Clark is a fantastic card in part because of it using a photo that has zero business being on a card. I'm glad it happened once.
August 17, 2022 at 9:54 PM

Bo said…
I LOVE this set. Can't believe I never noticed Linares's finger. I guess I was distracted trying to read the scoreboard in the background.

I'm more interested in the content of the photos than how they are cropped or if they are a little blurry. Any one card here has more character than entire sets these days.
August 18, 2022 at 10:05 AM