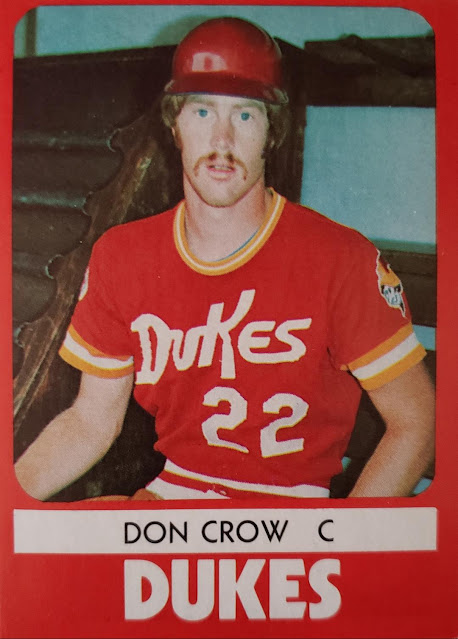 As a veteran blogger, I know that post titles will decide how many views you get.
Sometimes it's a catchy phrase or something that sounds controversial or confrontational in nature. Maybe it's a word that sets off the bots, like the other day when I accidentally wrote "Cardboard Appreciation" instead of "C.A." and created a frenzy of clicks (Bots love the word "cardboard").
My last post about the glorious vintage I got to wander through didn't get the views but did get the comments. That's how you know you're getting the right people to your post. Just put "assessment" in your post title and find out who isn't scared easily.
With that in mind, I changed today's post title from "minor league Sunday" to "a minor achievement," just to grab a few who might automatically ignore someone writing about minor league cards, which I'm about to right now (although maybe you got the hint by the card image).
A few days ago I completed the 1980 TCMA Albuquerque Dukes set. It is my favorite minor league team set of all-time. Not only does it contain young stars in the Dodgers chain when I was just getting to know stuff like that about my favorite team, but its bold-red design and large team letters, which TCMA used for a variety of other teams' minor league squads back then, evokes 1975 Topps.
I've written about these cards many times over the years, dedicating whole posts to even just one card in this set.
A couple of the cards in the set, like Dave Stewart and Mike Scioscia, are known toughies, although nothing here will cost you very much. The toughest cards for me to find, though, were long forgotten folks, such as the wonderfully named John O'Rear and the very last card I needed, Don Crow.
I still don't know who Don Crow is. I couldn't tell you why it took me so long to find it. For years, I'd check COMC -- the No. 1 place for me to find cards from this set -- and the Crow card would be sold out. Were there loads of collectors pursuing players with bird names?
It's fitting though that it was the final card I needed. Crow, at card No. 27, is the last card in the set. And how wonderful is it that TCMA did the noble thing and chose that number, which fills three 9-pocket pages perfectly?
Here now is the complete set for the 1980 Dukes: 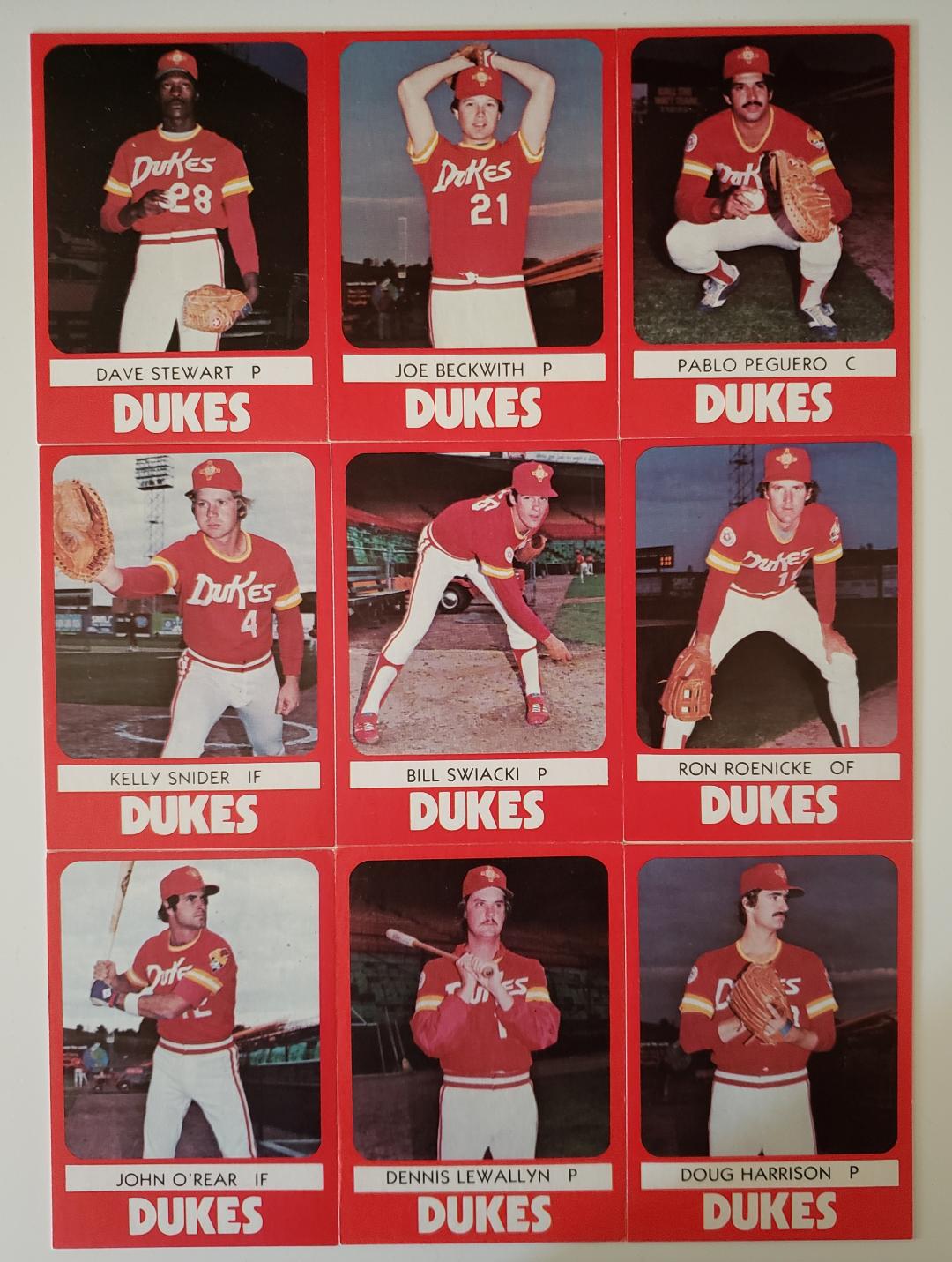 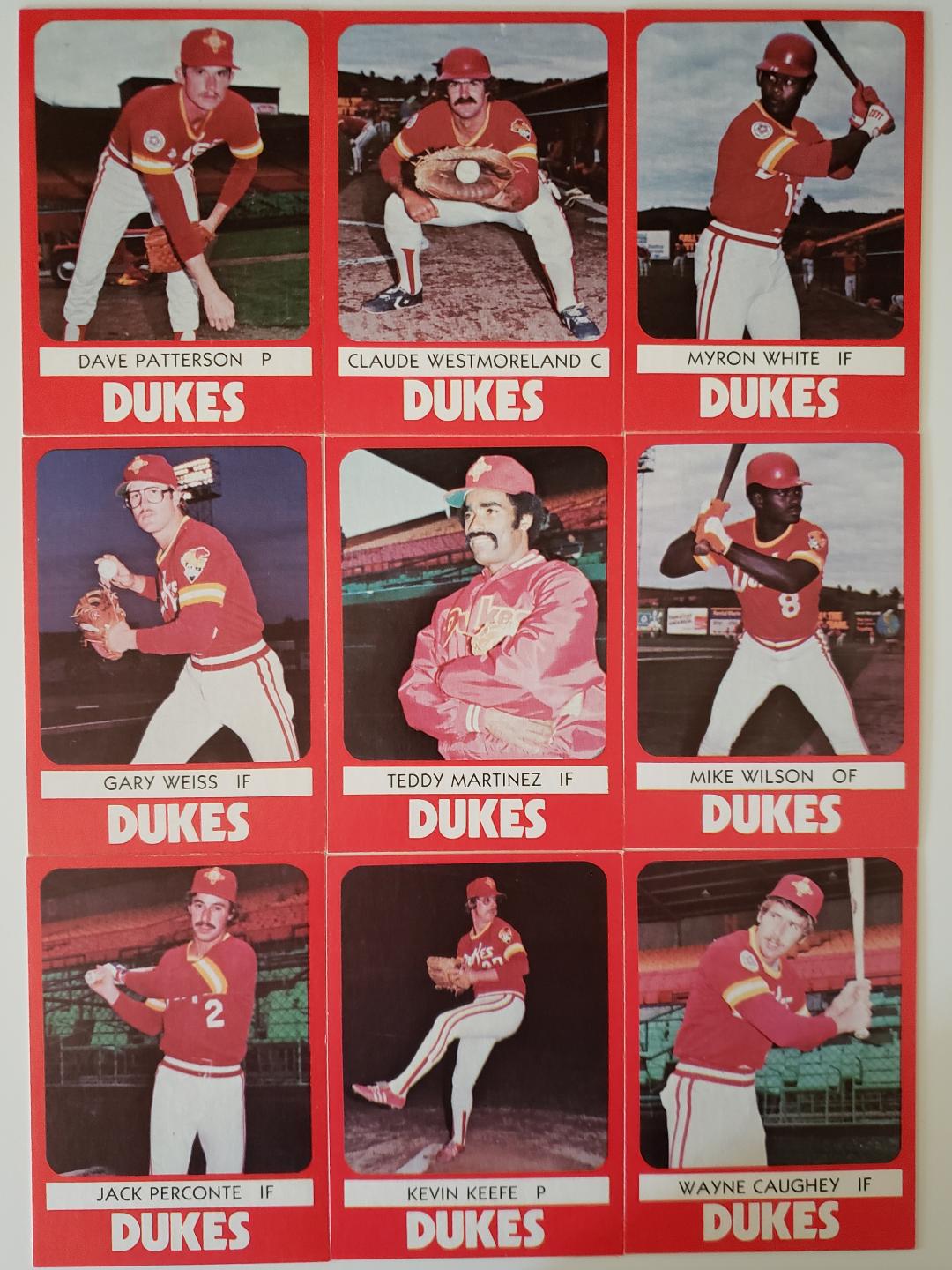 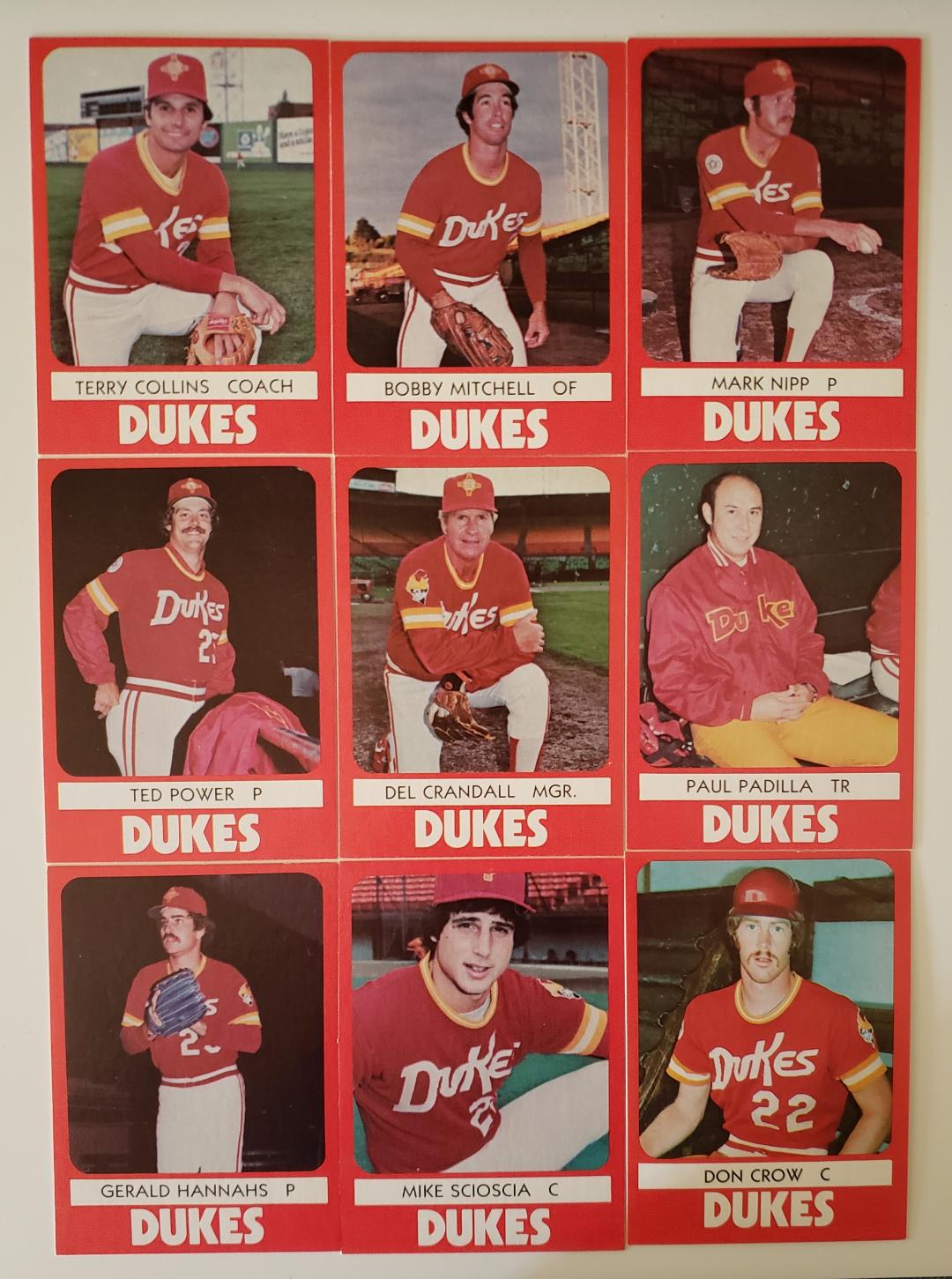 Lots to love here. That Dave Stewart card is an all-timer, one of my favorites in the collection. As for those who made an impact on the major leagues, there isn't a ton. Stewart and Scioscia are the notables. Joe Beckwith, Ron Roenicke, Jack Perconte, Ted Power and Bobby Mitchell had MLB careers in the '80s and Teddy Martinez in the '70s. Del Crandall is a great name from the '50s and, of course, Terry Collins became a major league manager.
But, for me, there's even more of an impact. Kelly Snider's pose is as regal as his potential was back then. Gerald Hannahs was from the city where I grew up. Claude Westmoreland's card is one of those you could look at for an hour and still find new stuff. Kevin Keefe looks like he's pitching underground, and I love the light tower behind Gary Weiss -- whoops, can't believe I almost forgot the trainer's gold pants.
But with Crow now securely in his cage, the set is done and it's probably the last time I'll bring it up on this blog. I'm sure some people are relieved over that.
Which is why I changed the name of the post title.

Shlabotnik Report said…
I never think of building older minor league sets, but I probably should. Loved Teddy Martinez as a kid. Semi-collect Del Crandall as an adult.
August 14, 2022 at 8:15 PM

Billy Kingsley said…
I'm guessing the obscure guy was harder to find because people didn't think it was worth the effort to list him. I've experienced that dozens of times. Superstars and rookies are always available, obscure guys not so much.
August 14, 2022 at 8:31 PM

Jeff Laws said…
I guess I'm the opposite of what you want. I read everything but don't post comments often. I also read on a RSS feeder so I don't know if you even get a page view for that. I'm not sure how that works so I don't pay much attention to my page views.

I've thought about minor league team sets but I have enough trouble getting the pros. If I end up with a minor league card I'll keep it but I don't actively search for them. I can see why you went after that one though, a couple of really good names in there.
August 14, 2022 at 10:15 PM

bryan was here said…
Congrats on finishing another team set!

I love minor league cards. I actually have quite a few of this set. Stew is an early card show pickup (Back when he was with the Dodgers!), Lewallyn, Perconte and Power are in the Indians/Guardians collection, and O'Rear is in the funny names collection. There are a few of the '80 TCMAs in that collection, including the (in)famous Dick Pole.

Mike Matson said…
Nice! I think I have the Chiefs from that year.. I think you sent them to me. Just had to pick up Danny Ainge separately.
I love minor league cards.
August 15, 2022 at 3:23 AM

Jon said…
I think Billy is right. Sportlots seems to be the better place nowadays for the lesser names from old minor league sets.
August 15, 2022 at 6:02 PM