August 11, 2022
(For the first time since March, readership numbers went up in July, breaking the year-long downward trend. But it's August now, a traditional low readership month, so might as well lean into it and restart one of my least read features! It's time for Cardboard Appreciation. This is the 313th in a series): 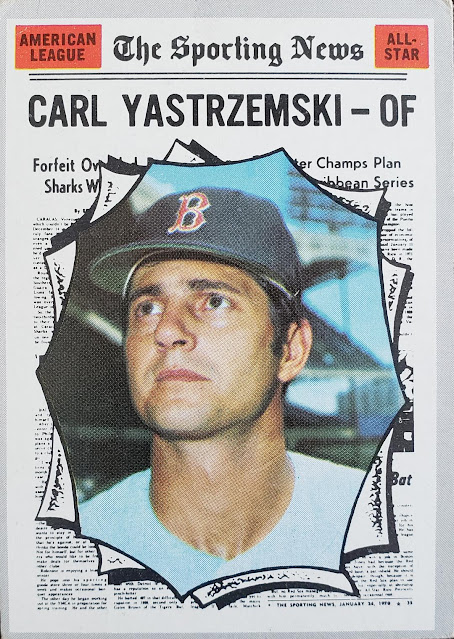 Without realizing it, I've been doing well in adding Carl Yastrzemski cards to my collection. Nothing nuts or anything (heck, I already have his rookie card), but it's nice to officially have his 1970s Topps cards out of the way with this particular one.
I nabbed this card in another Twitter sale from @Tec872 as I continue to chase the '70 set.
It occurs to me that Yaz is one of those players who never competed for the Dodgers that I will absolutely hang on to his cards as if he did. I know this is probably a common thing for people more accustomed to player collecting or those who grew up in the '80s and had to have every Bo Jackson card, whether he played for their favorite team or not.
But I didn't grow up in that atmosphere. For me, you had to be a Dodger or you had to fill a set. Pretty much every card that did not match one of those qualifications was fair game and trade fodder.
I have been operating under those rules for a long time. That's what makes Yaz's cards so special. He's one of the few that I will set aside as non-tradeable even if his card doesn't fill a set need.
I went through my Trading Card Database stats to see what other non-Dodgers I have the most cards for and whether I instinctively hold on to their cards even if they don't fill any collecting need. Here are a few: 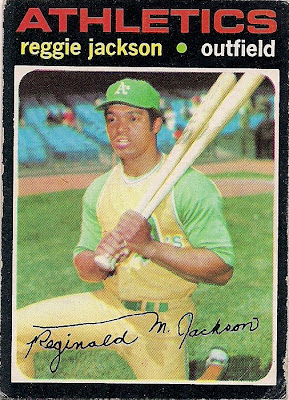 Reggie Jackson (45th in total cards)
I can't even trade any of the many retro modern cards of Reggie Jackson. Even though I rooted vigorously against the guy during his Yankees days, he was the most-talked-about player of my childhood, a unique personality, and his cards are staying with me. 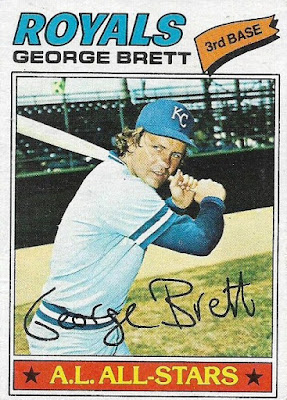 George Brett (66th in total cards)
George Brett's playing days cards stray way beyond vintage and all the way into the 1990s. But I will hold on to every one because for much of my childhood, Brett represented the best chance to keep the Yankees out of the World Series or even keep them from winning a game. It was hard to beat the Yankees in the late '70s, that's why we rooted for Brett. 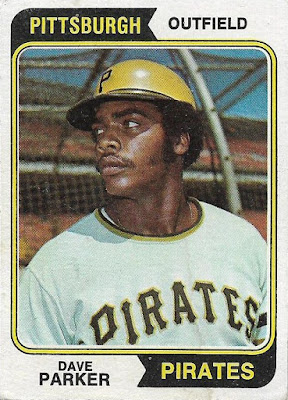 Dave Parker (111th in total cards)
I find my eyes lighting up every time I see a Dave Parker card from a set issued way after his retirement. I didn't know I enjoyed his playing quite that much. Sure, that throw in the 1979 All-Star Game is everything to me, but who knew it would keep a death-grip on Parker cards in my collection. Well, OK, the Brewers ones don't mean a heck of a lot. 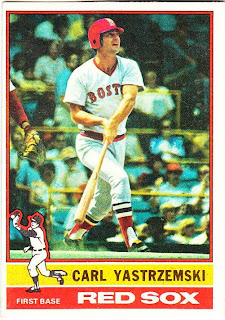 Carl Yastrzemski (118th in total cards)
It's true that the vast majority of my Yaz cards are tied up in sets, so there will never be that temptation to trade one of his cards. But I know if the offer ever came, I'd likely bat it away. My dad, the Ted Williams fan, always liked Yaz, too. 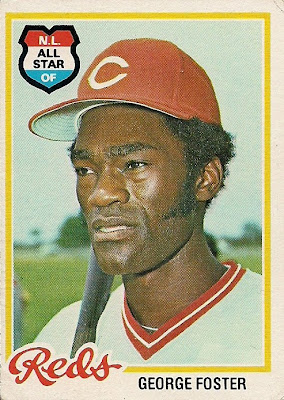 George Foster (130th in total cards)
I'll finish with just one more and maybe it's a surprise. But George Foster is the first "new slugger" I ever knew growing up. His '77 and '78 Topps cards were bigger than life, those type of cards you thought that kids would steal from you if you brought them to school. My first memory of seeing the '77 Foster is out on the schoolyard in fact.  So, yup, I hang on to his cards, even the Mets ones.
There are other players that I cling to when it comes to their cards but I want to keep the ones listed in the vintage realm as it's Vintage Week and all. I have quite a few cards of players like Nolan Ryan, Rod Carew and Carlton Fisk but I find that when they were traded or signed with another team, I didn't care as much. You can get Ryan Rangers cards, Fisk White Sox cards and even Carew Angels cards from me almost every time.
One other card came with the 1970 All-Star Yaz card in my Twitter purchase. 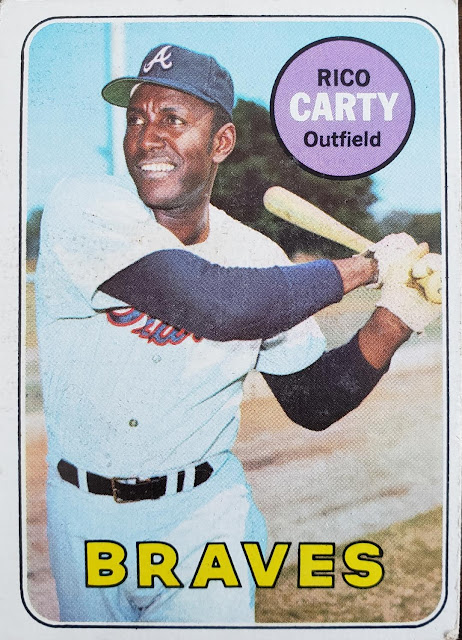 No, I don't really intentionally hang on to Rico Carty cards, although I do like them. But the 1969 set is going to play a significant role in tomorrow's post.
Stay tuned for that. You'll want to read it, I'm sure.

John Bateman said…
For a couple of years Foster was the most feared hitter on Earth. I know analytics did not like his game but as a kid I feared Foster more than Rose, Bench, Perez, Morgan etc.....
August 11, 2022 at 10:34 PM

Jon said…
I wish I could've seen George Foster play. From what everyone says, it sounds like his at bats were must see TV during his prime.
August 12, 2022 at 12:23 PM

Nick said…
I've been surprised at my Yaz collection as well - I'm down to needing his '64 Topps to have his entire Topps run. Anytime I pull out my Red Sox binder, I can't help but take a few minutes to go through all my Yaz cards.
August 12, 2022 at 5:41 PM

Matt said…
Yaz was someone I never got to watch, but he was one of the first baseball biographies I read as a kid. Glad he holds a special place in your collection.
August 12, 2022 at 10:42 PM

RR said…
I grew up watching the Sox and of course Yaz. Many of the cards you showed I collected as I opened the packs back in the day. I remember going to the five and dime store where my aunt and her mom both worked. I bought a pack of Topps Baseball cards for 10 cents. The box at the time had 36 packs so for the entire box I paid $3.60 and the cards back then are so much better than todays. The designs were just beautiful. Those were the good 'ole days gone but never forgotten.
August 14, 2022 at 7:08 PM