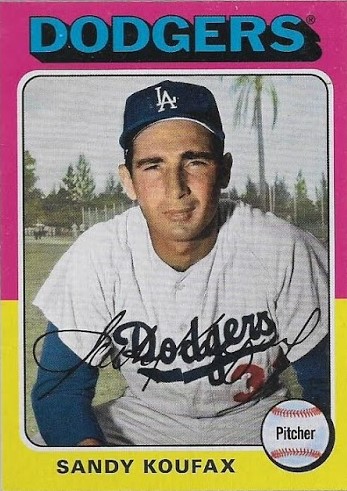 You're going to have to wait a little for the vintage on this post, and it's just one card. But I think it's a decent one.
So, yeah, that's my tease.
First with the modern junk ... er ... stuff.
Kevin from The Diamond King sent me an unexpected envelope a week or so ago. It might have been payback for the 5,000-post giveaway envelope I sent, or maybe I actually requested some of these cards and don't remember. When I'm uncertain, I always land on the side of my feeble memory.
All of the cards, except for one, are modern Dodgers items, like the Koufax Archives card above, and a few are pretty snazzy, too. 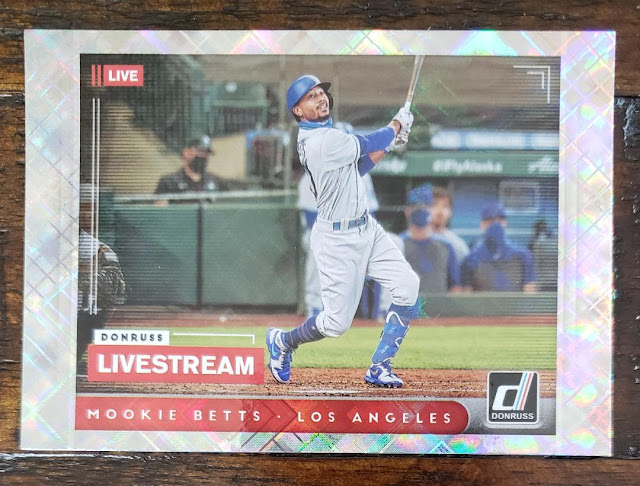 For example this from last year's Donruss. I didn't know such a thing existed. It's certainly different for Panini, as the card company is not in the habit of showing actual baseball scenes behind the players.
I admit though I half expected Mookie to move in some sort of lenticular fashion, so that was a small disappointment. Also, this is the "diamond parallel," which took me about 10 minutes of research and some process-of-elimination to determine. 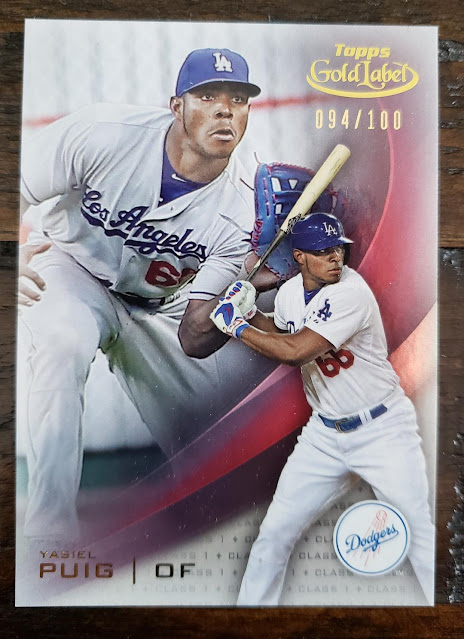 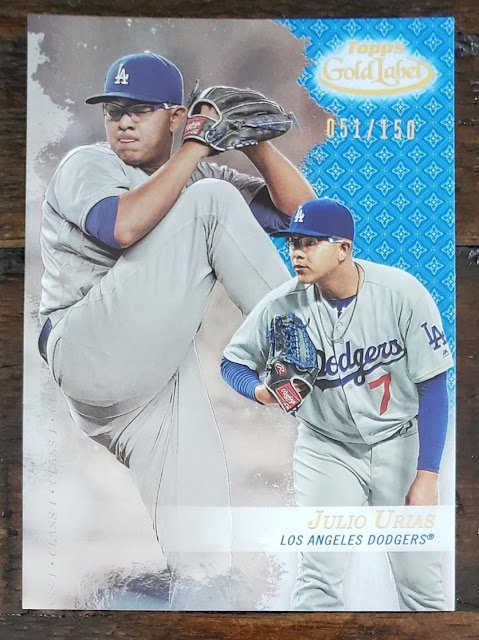 A couple of numbered items from Topps Gallery from five and six years ago. I'll decipher the reasons for the serial-numbering later. Right now I'll discuss how Julio Urias is a Cy Young Award candidate, but since the Dodgers have like three of those, they'll probably all cancel each other out and Sandy Alcantara will win. 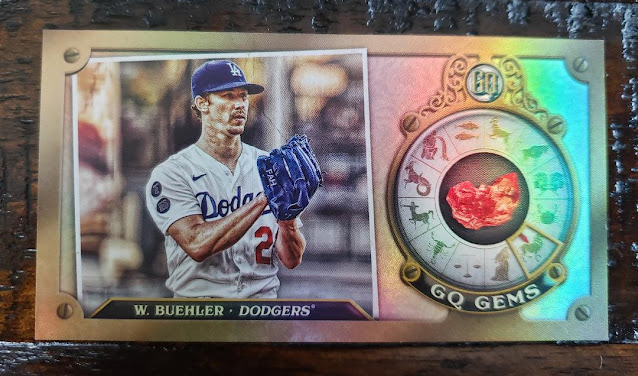 Walker Buehler is not one of the Cy Young candidates but this card is worthy of a Cy Young winner. This is an insert from this year's Gypsy Queen, displaying the gem stone of the player's birth month. It's a bit more impressive in the scan but still kinda a cool for GQ. 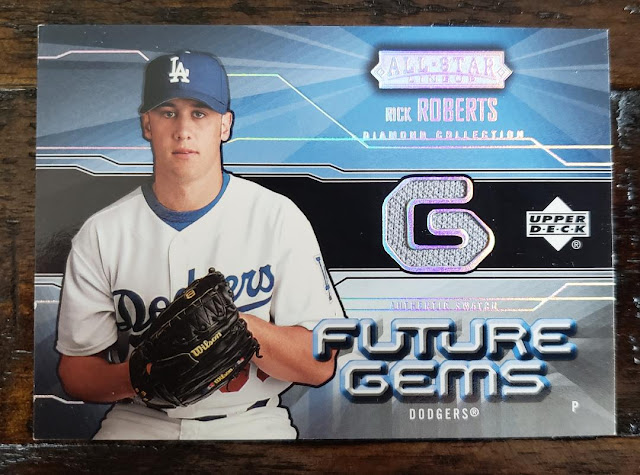 Here is another "gem" card. Rick Roberts' career was done 18 years ago and that is the smallest relic piece I've seen on a card.
The back congratulates me for receiving a card with a piece of uniform worn by Roberts in a Major League Baseball game. Roberts never made the majors. So I'm assuming this is from spring training, or Upper Deck is pulling a fast one again.
So those were the modern cards and people are probably wondering what happened to Vintage Week. Here you go: 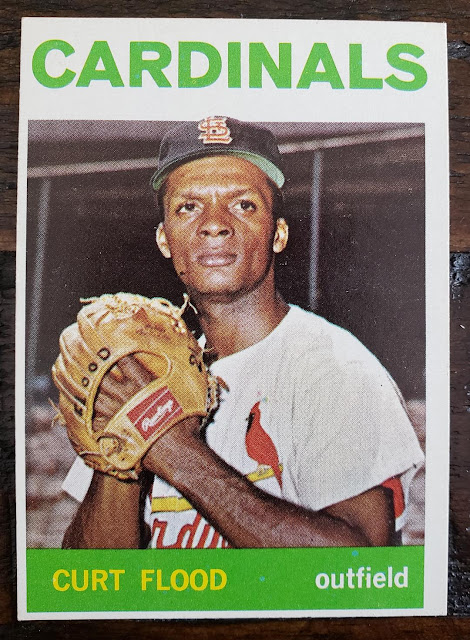 If you don't know, that's a super-sharp copy of Curt Flood's 1964 Topps card.
I stared at this card gratefully if a tad perplexed when it came out of the envelope. I love vintage surprises like this and I do enjoy Curt Flood cards. I've mentioned them on the blog before. But I'm not a Cardinals fan nor a player collector nor specifically collecting the '64 set.
So then the card sat there, on my rolltop desk with the other incoming packages, and waited and waited and waited, for days and days, for the light bulb to go on over that stupid collector's head.
It finally did -- yesterday.
This card is that card.
It's the card that has been hoarded for years by a single collector. It made news eight years ago when ESPN devoted an article to it. The collector had accumulated so many copies of the '64 Curt Flood card that the price on it rose across the board and some collectors had trouble finding it.
I now have that card.
This card:
Wow.
I know I read that article back then. I made reference to it at the end of a post. And the dude's obsessive nature stayed in my head. I'm sure I thanked my lucky stars at the time that I had no interest in collecting the '64 set and wasn't a Cardinals fan, but other than that I didn't think more on it other than that there is some crazy stuff going on with '60s cards. Curt Flood's 1964 card is not a high number, it's card #103. But if you want a copy as sharp as this one from sportlots, they're asking for $50 or more. COMC doesn't even have a copy above VG/EX aside for some overpriced graded thing.
However, it seems the difficulty in finding a nice copy of that Flood card is over. Checking ebay, several quality '64 Floods have sold for $20 bucks, $15 bucks and lower.
I don't know what that says for the '64 Curt Flood hoarder. Maybe he's finally moved on to other things or maybe he's slipped on a few available '64 Floods. It would explain why I now have this copy.
I hope he's still around and collecting, because even though I don't agree with this kind of behavior, you should be able to collect the cards you love. 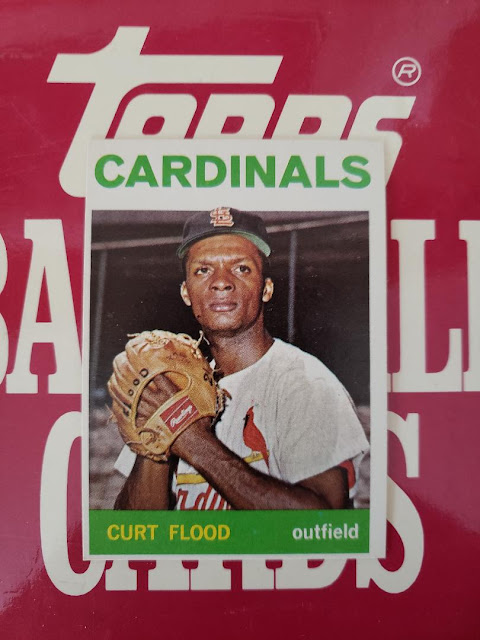 But he's not getting this copy. Hands off, hoarder.

Jeremya1um said…
You should be able to collect the way you want as long as it’s fair to others. He’s the same type of scum that buy out Target of packs and kids and average Joe collectors aren’t able to get anything without paying a premium. I too hope he’s collecting, but I hope he sees that you got one for free and I hope it ticks him off. If he never learned from Mr. Rogers or the Good Book that leaving some for the next person is the right thing to do, then he doesn’t deserve to get his hands on the cards he wants.
Rant over. I’m glad you got the Flood and the non vintage cards. That Gypsy Queen card doesn’t actually have a stone/gem in it does it?
August 10, 2022 at 8:05 PM

Johnnys Trading Spot said…
I hadn't heard that hoarding story before this post. It made me do a quick check to see if I needed it, thankfully I have it. Maybe even dupes. I'm going to check them too (later).
August 10, 2022 at 8:11 PM

Brett Alan said…
Is a spring training game really an MLB game? I guess so, but it's kind of sleazy to not make the distinction.

The Diamond King said…
Yep, a few weeks ago you mentioned the 64 Flood hoarder and that you probably wouldn't ever get one. So I looked and got lucky to find 2 at reasonable prices! So one for me and one for you. And since you are Night Owl, had to pack it in some Dodgers. Enjoy!
August 10, 2022 at 11:00 PM

Fuji said…
Never gone out of my way to search for a 64T Flood... but I'd be pretty stoked if I found an affordable copy eventually. Hopefully the guy has chilled out... and the rest of us can add copies to our collections.
August 10, 2022 at 11:02 PM

steelehere said…
I wonder if you had the ample resources would you try to acquire all the 1975 Topps regular and mini Ron Cey cards.
August 10, 2022 at 11:56 PM

bryan was here said…
He's not getting mine either! Shortly after reading that article, I found myself a nice copy. Makes you wonder if someone's hoarding the '66 Grant Jackson/Bart Shirley rookie. Been chasing one for awhile, '66 high numbers have been getting stupid money lately.
August 11, 2022 at 12:17 AM

Jafronius said…
I had an image of that guy sneaking into our fellow readers' homes and stealing their copy of Flood.
August 11, 2022 at 8:13 AM

Jon said…
I must be in the extreme minority, because him collecting all of those Flood's doesn't bother me in the least.
August 11, 2022 at 8:30 AM

Nick Vossbrink said…
Have never understood why you'd want hundreds/thousands of one card. Though doing so doesn't bother me either. Gonna be wild when that guy dies and his collection hits the market though.
August 11, 2022 at 12:27 PM

Bo said…
Glad the market is easing on this card. It does make it a little more interesting to have that history.
August 11, 2022 at 12:41 PM