Their cup runneth under 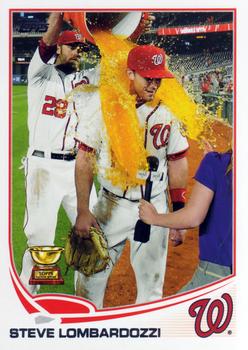 Among the posts I teased to a couple of months ago was one in which I determine who were the worst-performing "Rated Rookies" in the history of the Donruss brand.
Well, as much as a few Twitter folks wanted to know that, it's already been done. Almost two years ago, in fact. (I need to get myself a Sporting News gig where I write about baseball cards).
That's cool. Because that's just Donruss and I've been only half-interested in Donruss since it debuted. What I really wanted to examine are the worst-performing Topps All-Rookie players. You know, the folks who received a rookie trophy or rookie cup in the following year's baseball card set.
Sure, I could determine who was the worst AND who was the best, rating them like that Rated Rookies article did. But you know all the best-performing rookie cup players already. They get all the pub. Guys like Johnny Bench, Carlton Fisk, Rod Carew, Mark McGwire, Aaron Judge and Cody Bellinger.
Yeah, it's time to pay tribute to the players who managed to produce a major league career but still ranked at the bottom of their class.
Like the Rated Rookies post, I am using WAR (Win Above Replacement) as the stat to figure out "the worst." I know people have issues with WAR but it's the easiest way to compare for someone who has already spent enough time researching this thing. (Actually, I guess I am using "bWAR" to rate players, which I discovered for the first time while researching this, is merely the notation used for how baseball-reference.com calculates WAR).
I will also be using WAR when I write the post about which multi-player Rookie Prospects cards are the best of all-time. I'm almost done with that project and, man, there are too many rookie prospects cards in cardboard history.
But for now, I am posting the "top 10" least-performing Topps All-Rookie  team players since Topps started selecting back in 1959.
I am posting the top 10 only for those players who showed a rookie trophy/rookie cup on their card. As you know, Topps didn't feature the trophy/cup for a significant period during the 1980s, as well as a couple other years here and there. So, for the official top 10, it's only those with trophies/cups. I will then show the top 10 with everyone included, whether they had a trophy/cup or not.
So, here we go. You Nationals fans will be pleased to know that 2012 Topps rookie team member Steve Lombardozzi Jr. just misses the cut with a career minus 1.3 WAR. 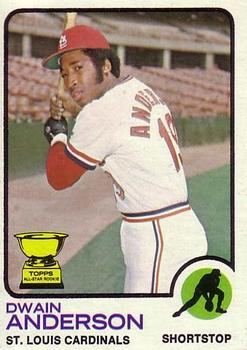 10. Dwain Anderson, 1972 All-Rookie team shortstop. WAR: (-1.4).
Anderson should be one of those players I know since he showed up in the 1970s. But even when I was collecting the '73 set and came across this card, I said "who?" Anderson lasted four years, 149 career games and posted a .203 average.
And, yeah, I'll just get this out of the way for anyone thinking it: yes, I know they did far better than I or the vast majority of the baseball-rooting public could do. 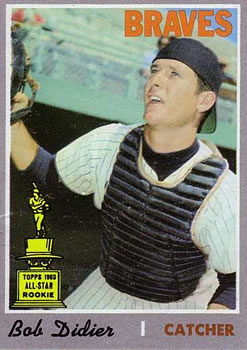 9. Bob Didier, 1969 All-Rookie team catcher. WAR: (-1.6).
The most recent inductee as a Legend Of Cardboard! I guess here's another reason he's a Legend Of Cardboard, or at least why he gets considered in that series, because nobody was calling him a legend on the baseball field. Hell of card though. 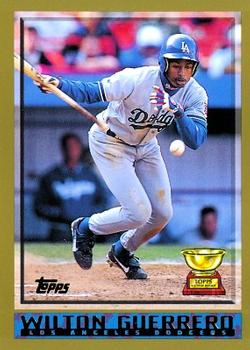 8. Wilton Guerrero, 1997 All-Rookie team second baseman. WAR: (-1.8).
As I was compiling the list of the player with the least WAR on each All-Rookie team, I was pleased that there were no Dodgers, basking in the knowledge that the Dodgers could always pick their prospects.
Then Vlad Guerrero Jr.'s uncle showed up and I remembered. "Oh, yeah, him."
I have so many cards of Wilton, even though he spent just two years with the Dodgers. His 1997 season was actually not bad. But he slowly declined. Lasted until 2004 though. 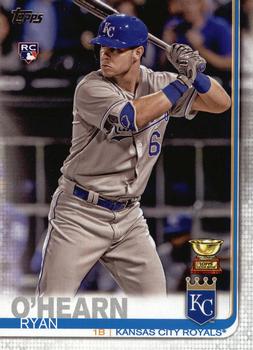 7. Ryan O'Hearn, 2018 All-Rookie team first baseman. WAR: (-2.3).
Ryan O'Hearn still has time to play his way off this list as he's an active player. That's good news for all those collectors who pulled O'Hearn autographs in 2019.
I almost excluded active players from this list. But I guess I can consider it incentive. 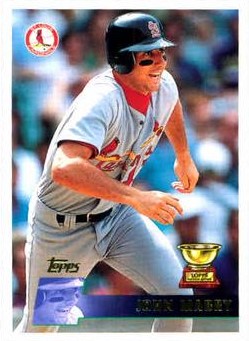 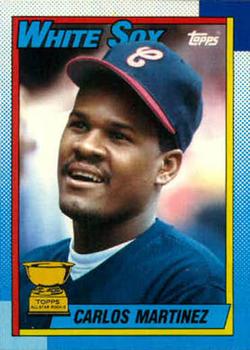 5. Carlos Martinez, 1989 All-Rookie team first baseman. WAR: (-2.4).
I seemed to pull a lot of cards of this guy in the early 1990s.
Carlos Martinez is the first of three players with that name to appear in the major leagues. He has the lowest career WAR of all three, although there's still time for Cardinals pitcher Carlos Martinez, who is at minus 1.4 currently. 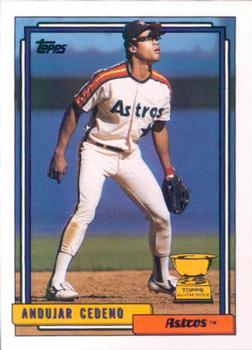 4. Andujar Cedeno, 1991 All-Rookie team shortstop. WAR: (-2.8).
I seemed to pull a lot of cards of Cedeno, too. Way more than Cesar Cedeno, who I liked and wished he had more cards to pull.
I believe Cedeno's rookie card was worth something for a hot minute as I remember setting it aside back then. Cedeno died in an automobile accident back in 2000. 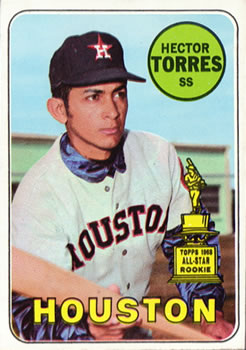 3. Hector Torres, 1968 All-Rookie team shortstop. WAR: (-3.6).
One of just two players featuring the rookie trophy on his card, all the rest have the cup.
Torres was batting just .159 by the time this card appeared in packs. Still, he managed to last through the 1977 season and was the starting shortstop for the Blue Jays in their very first game. 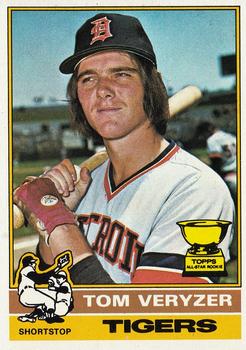 2. Tom Veryzer, 1975 All-Rookie team shortstop. WAR (-3.7).
This is a card I knew well as a kid. I wasn't crazy about it. I had never heard of Tom Veryzer and the rookie cup players I was chasing that year -- Fred Lynn, Jim Rice, Gary Carter, heck even Jerry Remy and Dan Ford -- were so much cooler.
Veryzer lasted 12 years in the majors and was much more appreciated for his fielding than his hitting. He passed away in 2014. 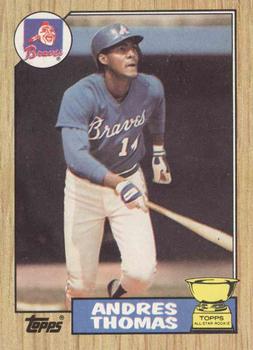 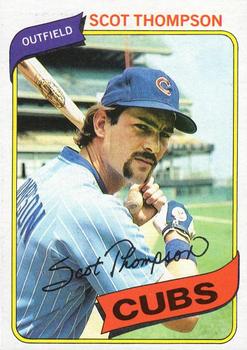 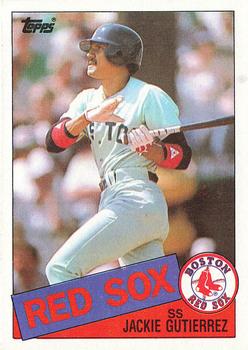 John Bateman said…
Oh, I thought this post was going to be the worst rookies to receive a rookie cup
October 20, 2021 at 7:36 PM

night owl said…
I don't think I understand what the suggestion is and if I do understand it right, I'm not interested.
October 20, 2021 at 9:24 PM

Nachos Grande said…
No Reds on the list which (I think) says more about the team not having many rookies considered "good" over the years than it does about the Reds having good rookie cup players.

Brett Alan said…
Man, a LOT of shortstops on that list. Whether that means a lot of shortstops start well and go bust, or that few teams give rookies much time at short so the winning shortstop may not have done much, I don't know.

There’s also a cool quiz on Sporcle to test your memory on all the Topps All-Star Rookies from 1970-1989 that I figure you’d enjoy if you haven’t played it yet (there are quizzes for the years prior and after as well).

Adam said…
I remember the Cedeno and Martinez cards from my childhood collection. I knew of Cedeno because of the Astros playing the Reds but had no clue who Martinez was. Very cool post!
October 21, 2021 at 6:16 AM

Nick said…
I like & collect John Mabry, but I never realized how statistically awful his career ended up being. Yikes.
October 21, 2021 at 3:40 PM

jacobmrley said…
Carlos Martinez famously hit the fly ball that doinked off of Jose Canseco's head in one of the all time great blooper shots ever. Now that is a claim to fame!
October 24, 2021 at 3:40 AM