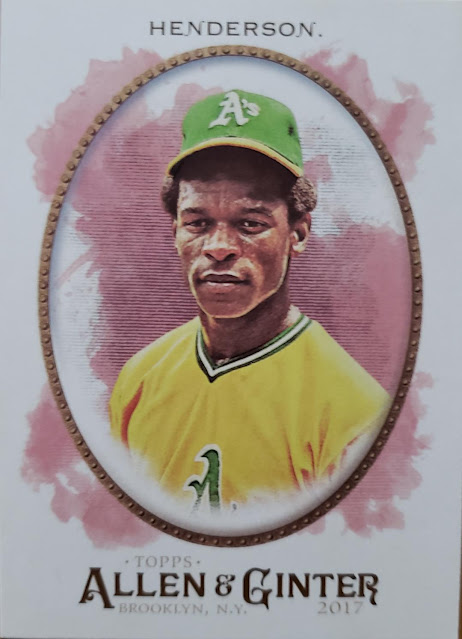 From the time I started writing this blog, I was amazed, and envious, any time anyone mentioned their "monthly card show."
Monthly card show. What on earth was that like? Heaven, that's what it's got to be like. Something to look forward to every damn month? Imagine the luck.
I had never experienced a monthly card show. Not even back in the '80s. Granted, I wasn't looking for shows during the height of the junk wax era, in the late '80s and early '90s, so there may have been some monthly shows around me then. But the concept has been as foreign to me as beets on pizza (yes, this exists).
Well, that 50-plus-year streak of not knowing what a monthly show was like ended Sunday, when I attended a card show after attending a show in the same place in September. Holy smokes, that's a monthly show! I've made it! I'm in heaven!
Well, not quite (monthly show-goers are nodding their heads).
Don't get me wrong, it's great. Any day that I can get to a card show is probably the best day of the month, the best day of several months. But like any unattainable object or event that you hold on a pedestal and finally reach, it turned out it wasn't all I had hoped for.
First of all, the obvious factor: less money.
With at least three months, often six months, and lately a freaking year-and-a-half between shows, I have time to save cash. But I had no time a mere month and 12 days after the last show. I haven't purchased any cards in more than a month anyway due to a lack of extra income and now, uh oh wallet, another SHOW.
But I managed to scrounge together enough to make the drive worthwhile, although only half as much as I usually bring. 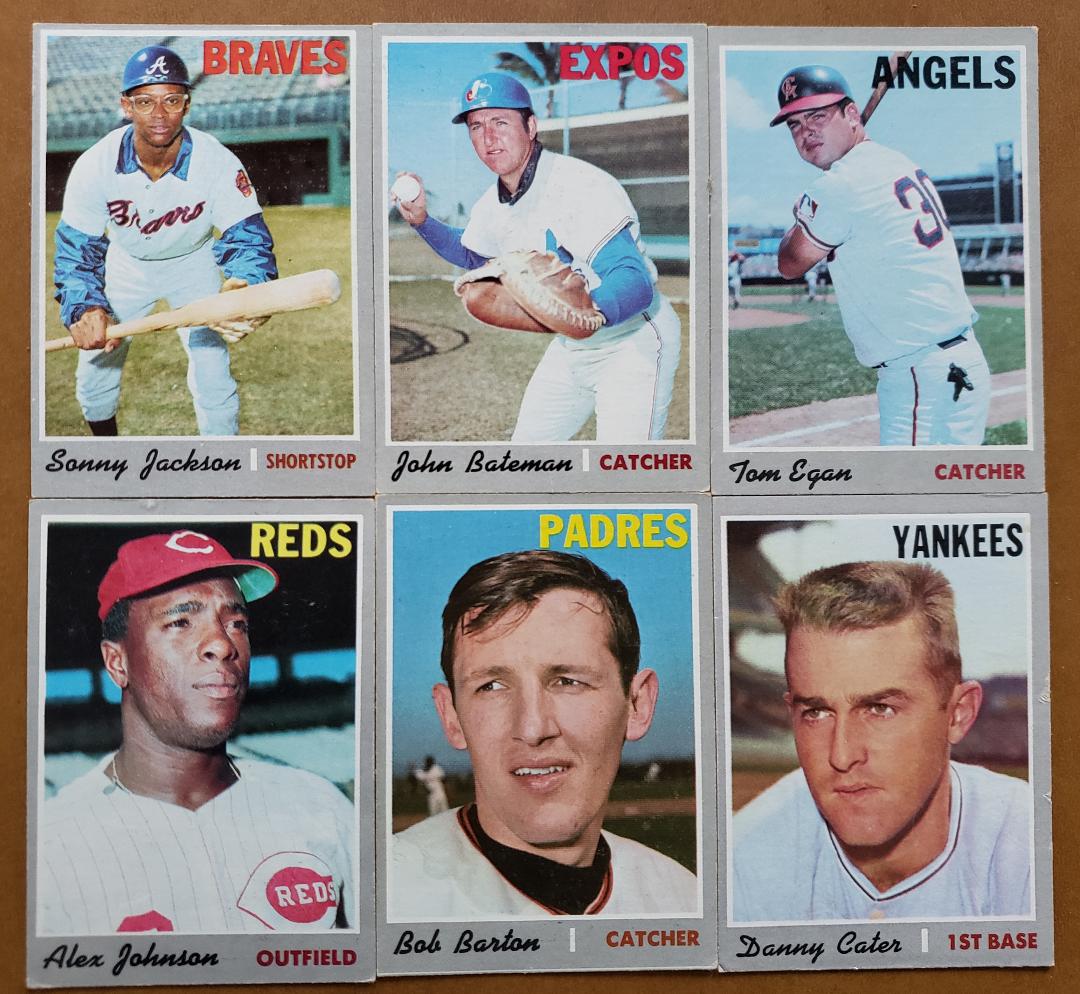 I was curious what it would be like, one month later.
The September show was packed. It was the first card show at the state fairgrounds since the start of the pandemic. I parked farther away from the building than I ever had and there were people parking vehicles. They were running out of spots, there were people walking everywhere.
The show itself was crowded but not overly so. And although I saw some new developments since everyone decided to start collecting cards, it was mostly the same, familiar feeling, which I was happy to see. 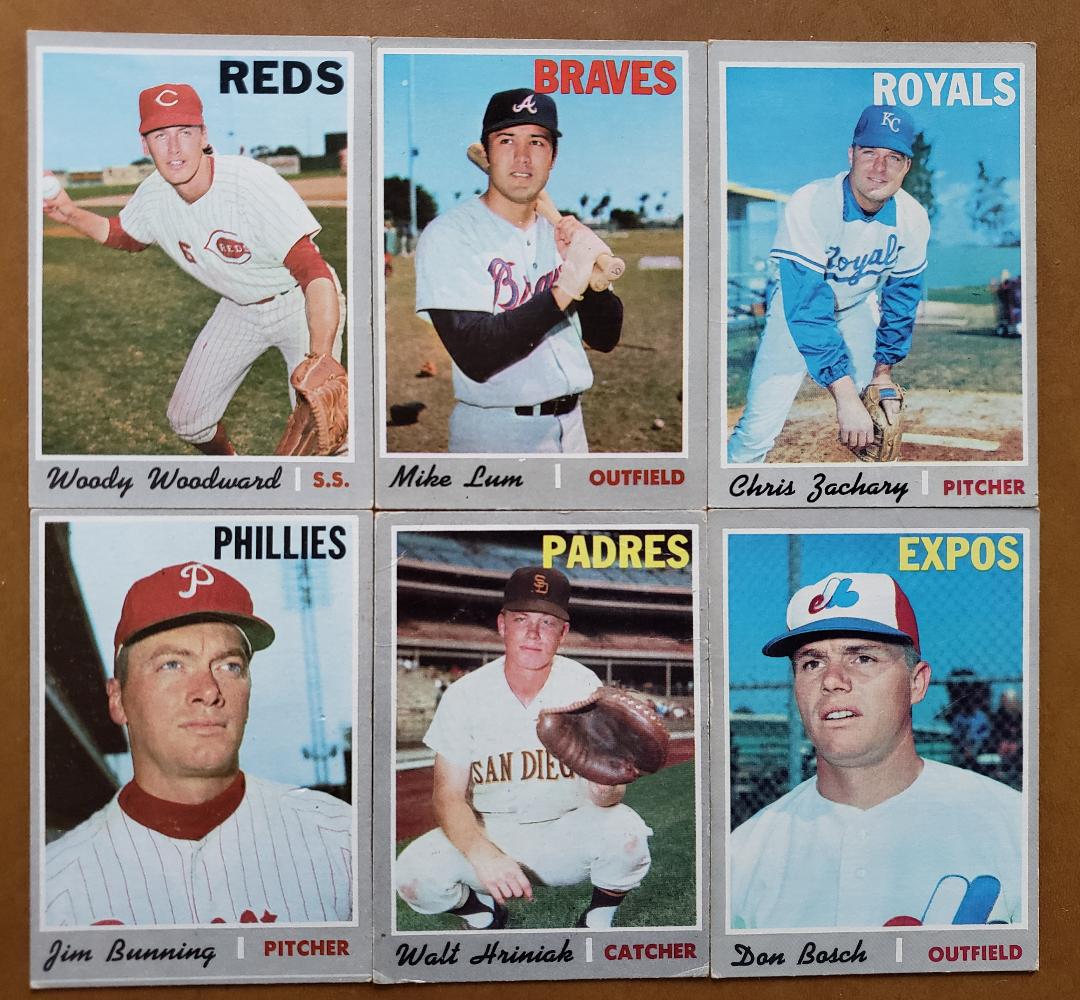 This show -- just one month later -- was more low key.
There was nobody there to guide me to a parking spot. I was able to park much closer.
The room was active, yet not as well-attended as in September. There was less of everything. Less cars, less people and less cash for me. 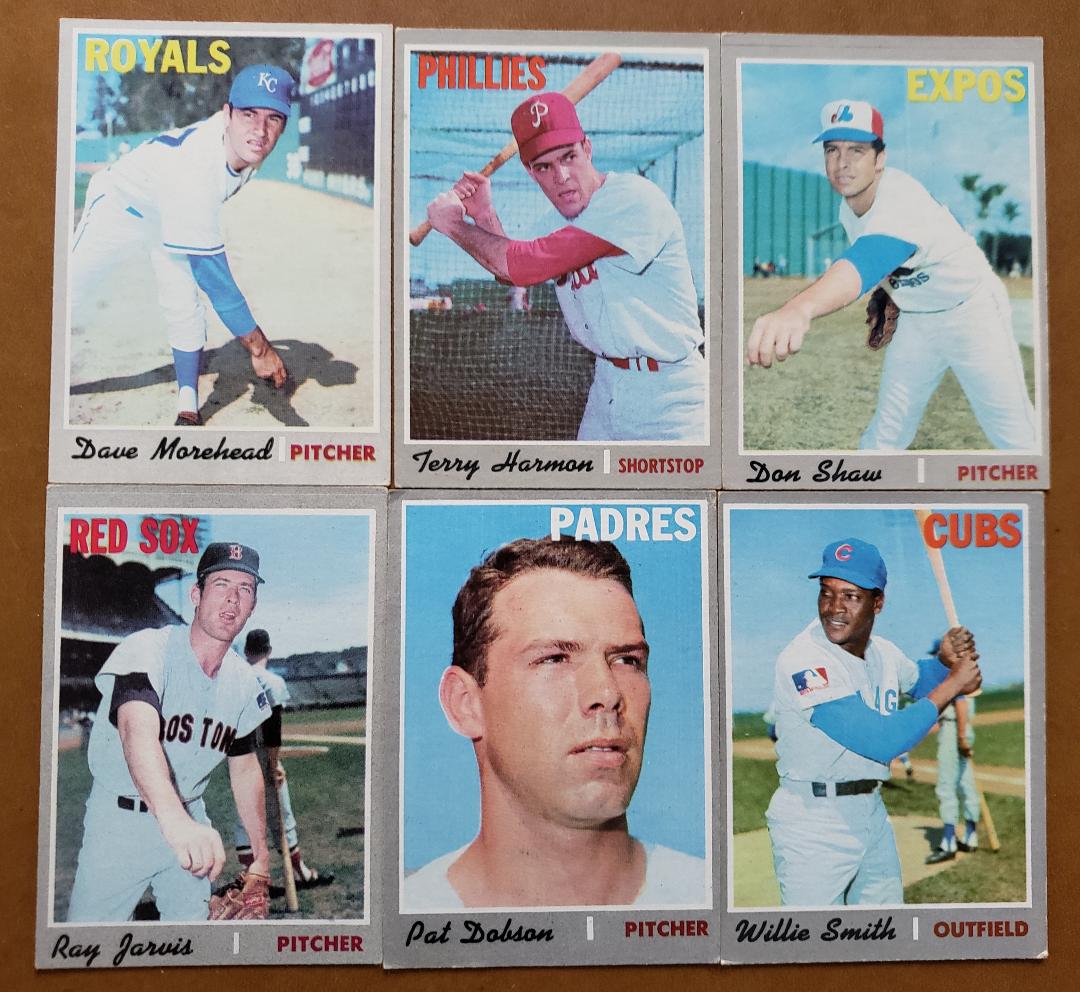 I decided I would hunt for some discount boxes with the money I had. But, like the other show, there weren't a whole lot of those, even less.
Several of the ones I saw had people in front of them, digging away and I had no patience to wait them out.
I ended up in front of one 25-cent box sifting through anything that would fit my collection. There wasn't a lot there for me, a whole bunch of football. But I pulled out a card or two, plus a few for trade partners. 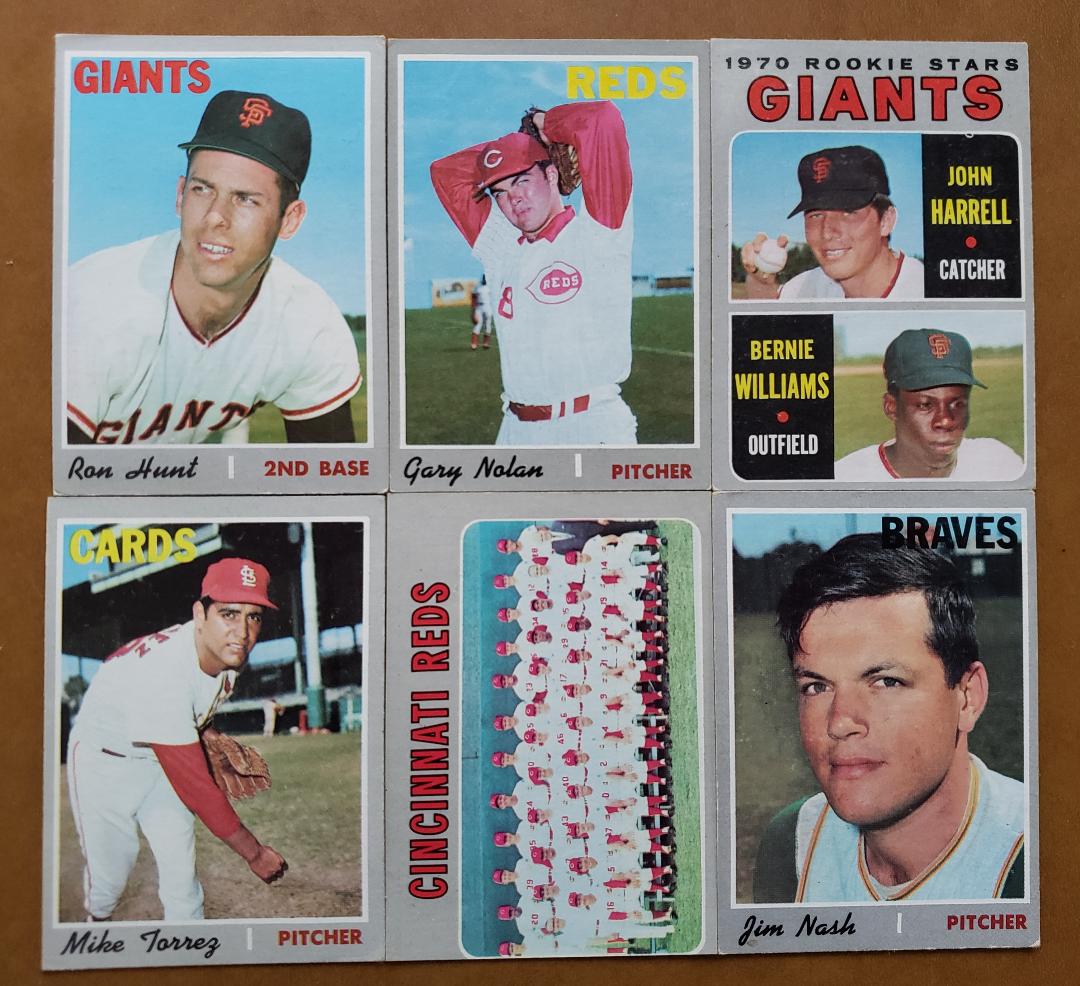 Going the discount route was looking hopeless. I turned the corner from the discount bins and found several small stacks of interesting items, some non-sports and some old, old cards. I spotted some 1950 Bowman cards going fairly cheaply.
I pulled out a handful to purchase and as I was doing that, the main dealer left his table. Then, the woman helping him left the table. There was nobody there at the table anymore. And I was ready to pay. I hate that.
So I returned the Bowmans to their stack and walked  away. Their loss. 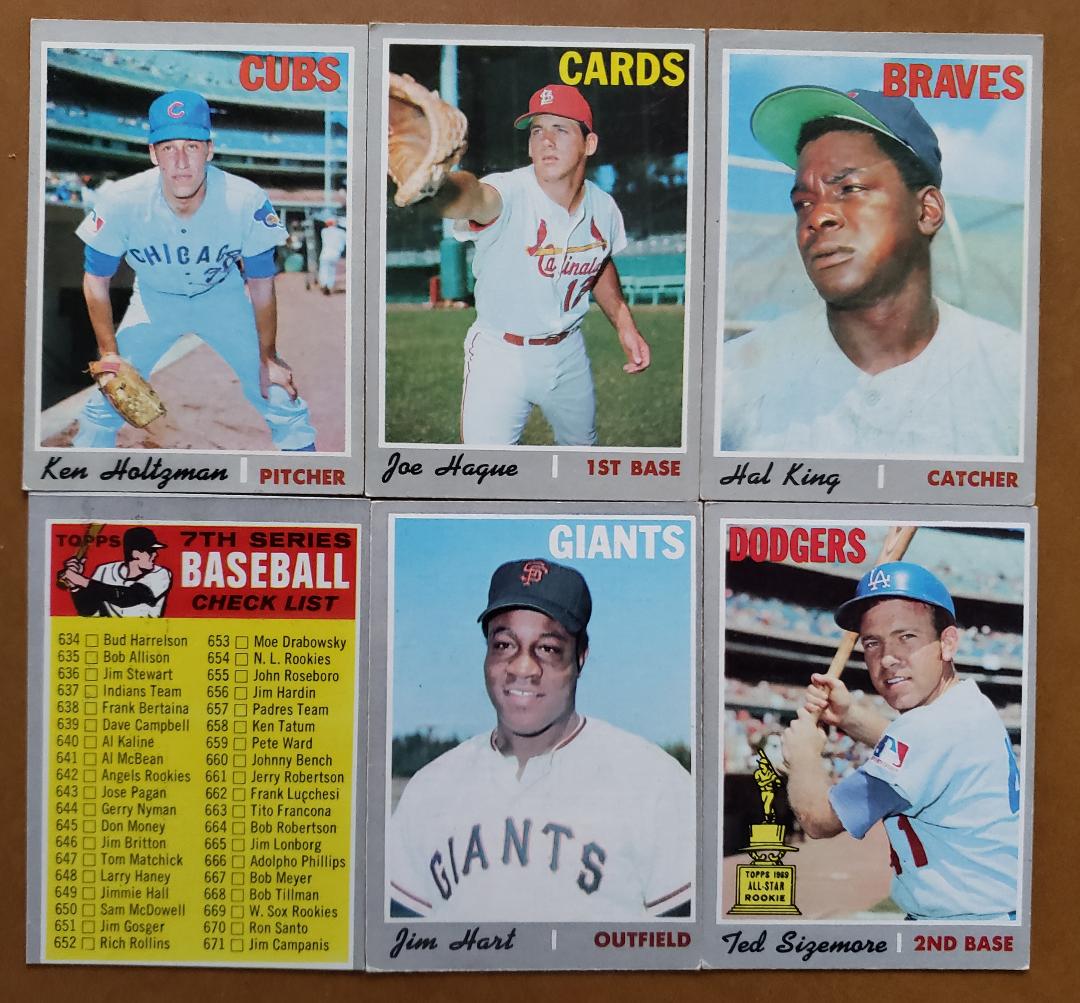 I ended purchasing cards from two tables that I go to quite a bit.
One had decent-conditioned 1970s vintage available. I went right for the 1970 Topps cards and found several that I needed (I always check my blog want list on my phone and it is the greatest thing in the world).
Then I walked over to the main vintage table that gets all of my money. I thought about finding some Laughlin cards or maybe a few '67s but instead grabbed the 1970 binder and went to work. 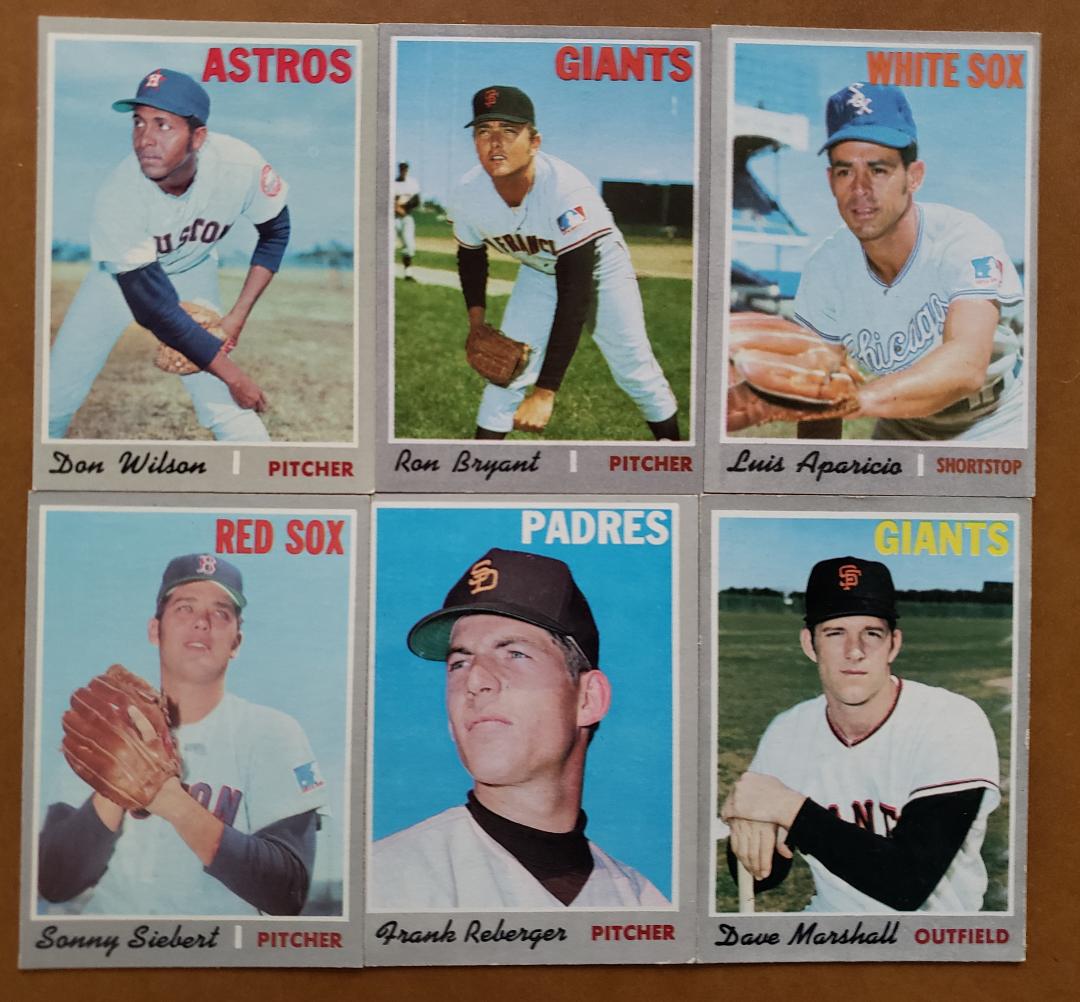 This is where I made a bit of a mistake because although I checked my blog list to make sure I didn't buy duplicates, I didn't cross-reference with the cards I picked up from the other table. 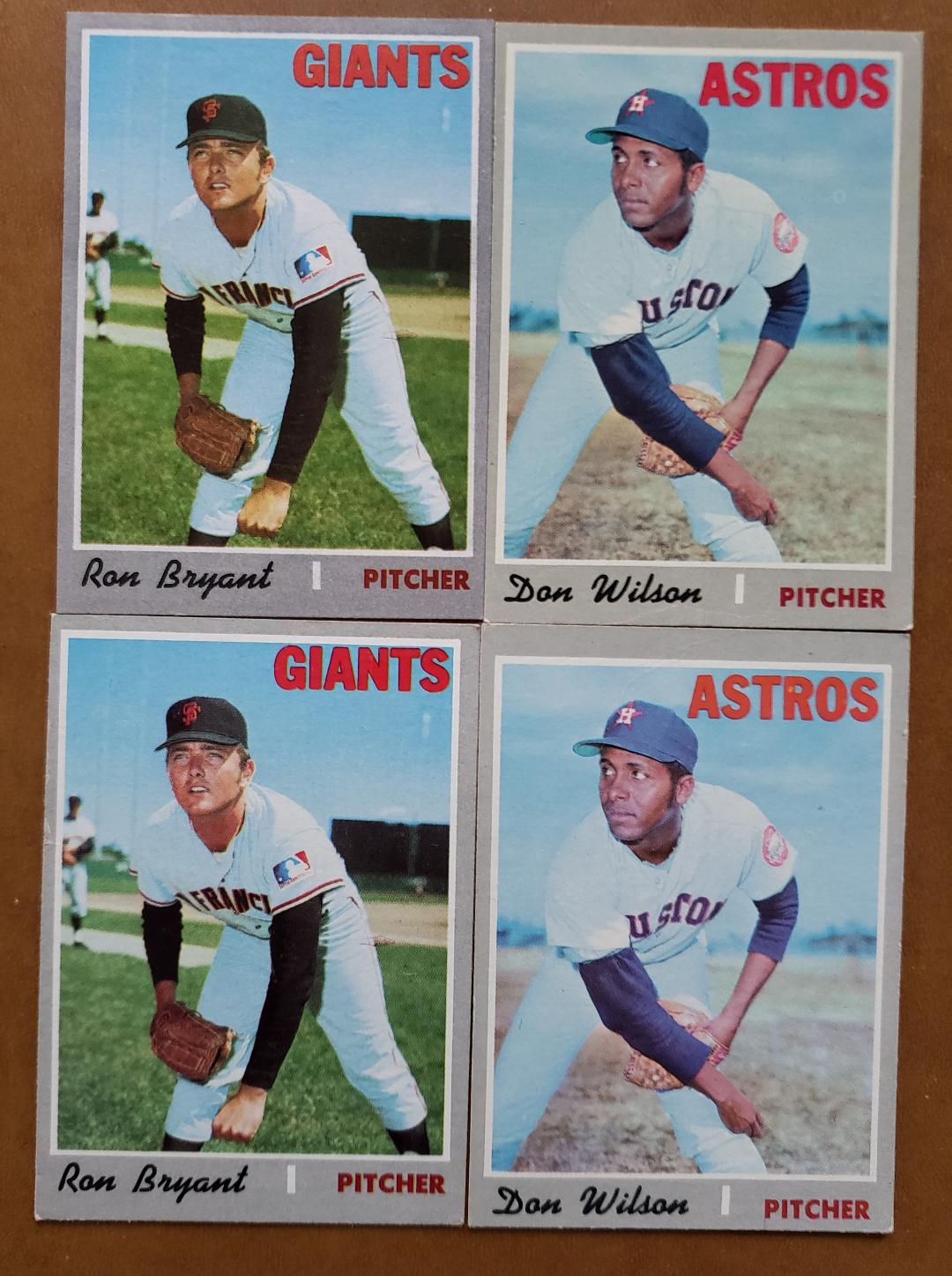 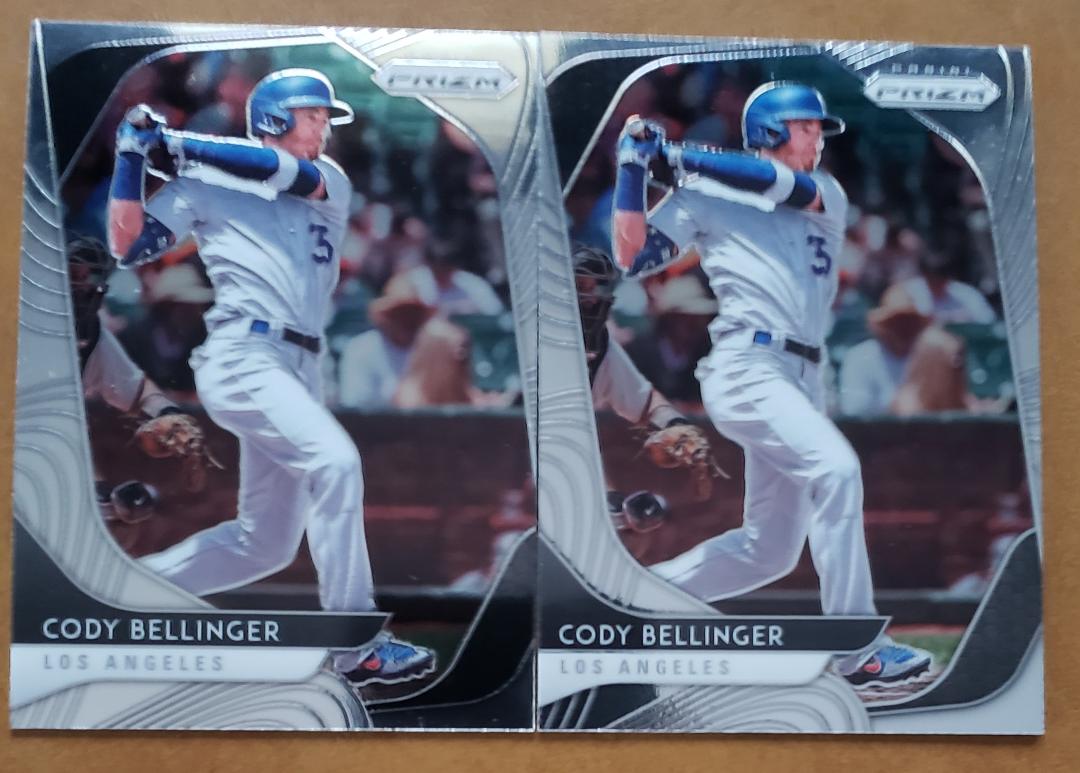 This happened at the quarter box, too, although that was because I carelessly didn't check my blog list and just assumed I needed the Bellinger 2020 Prizm card. Then I stupidly dismissed the Kershaw from the same set, thinking I had it, but I didn't! I think I get more annoyed by that than buying duplicates. 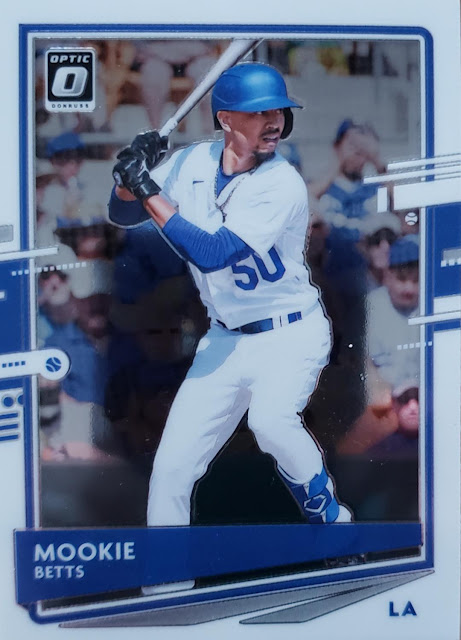 I ended up buying just one Dodger card need, this Mookie Betts Optic card. That was it. That is an all-time low for me and buying Dodgers at a card show.
But obviously 1970 Topps turned out the big winner from this show. With these purchases, I'm down to needing around 220 cards to finish the set. Almost all of the big ones are left, of course.
I definitely am pleased with what I landed. The thrill of a show to attend was not as high as when I couldn't find one for months but in this weird time when there's more shows than ever, maybe it'll force me to budget my card cash a little better.
I am very grateful for this development in our new card world. Because there's always someone out there who hasn't been to a show in 25 years.
And that sounds like the opposite of heaven to me.

acrackedbat said…
I haven't been to a show in over two years. I'm ok with that for now, maybe forever. I don't know where my collecting is headed. I find myself drawn to oddities and mini-collections, hoping trade pals will take care of the newer cardboard. Hope to have some pickpockets up soon for your perusal.
October 25, 2021 at 8:36 PM

Nachos Grande said…
I hadn't been to a card show in nearly 25 years (possibly longer) so it was great for me to get to that show as well. I didn't end up buying anything but I have to say that I was impressed by the amount of vintage stuff there. I was thinking I might have stumbled into some original 1800s Ginter but I only saw two such cards (one of which I already owned). Still, I do hope to go back soon, this time I'll have a better plan of what to look for!
October 25, 2021 at 8:36 PM

Nick said…
You nailed my thing about monthly shows - I just don't know where people get the *money* for that kind of indulgence month after month. I have a couple monthly shows in my neck of the woods, but I'd go broke if I tried making it each time.

I've definitely bought doubles (and triples!) in the same show before, so I feel your pain there. Glad you walked away with some nice finds, particularly love the '70 Topps Sonny Jackson.
October 25, 2021 at 9:29 PM

Brett Alan said…
The card show in Garfield NJ is at least twice a month--sometimes three. I go from time to time, but if I go too often, there just isn't that much new stuff.

I did go to my super-local show this weekend. This was the first one they've had since the Before Times, and even when there isn't a pandemic they only run about twice a year.
October 25, 2021 at 11:40 PM

Jay said…
"This is where I made a bit of a mistake because although I checked my blog list to make sure I didn't buy duplicates, I didn't cross-reference with the cards I picked up from the other table."

I am relatively new to card shows, but I've already made this mistake multiple times myself already.
October 26, 2021 at 12:11 PM

Grant said…
Nice pickups with the Aparicio and Bunning cards. If they were a quarter then I'd say that's a hell of a deal.
October 26, 2021 at 2:36 PM