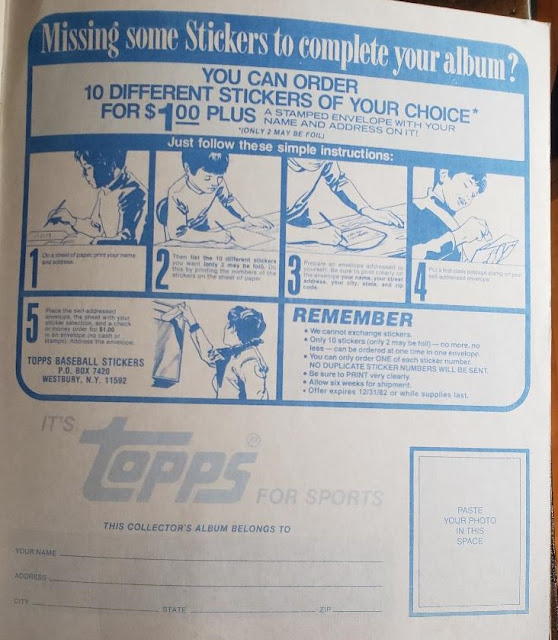 A couple of commenters in the last post brought up a good point about the ways Topps recognized the postseason after the 1970s.
They didn't necessarily use the flagship set to do it, and although I'd prefer that they did, I know that recognition came in other forms.
As the commenters said, one of the main ways was with stickers.
I know all about that. Because that's the only way I could get an account of the Dodgers' World Series title in 1981 -- it certainly wasn't on cards! 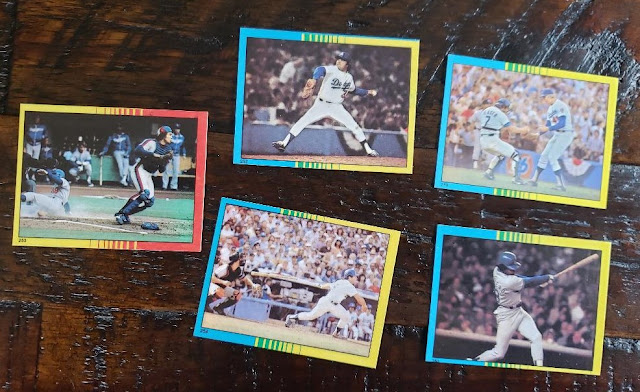 There they are, the 1981 postseason stickers.
There's one for the Dodgers' win over the Expos in the NLCS and then one for each World Series game the Dodgers won, Games 3, 4, 5 and 6. Topps selected a player for each sticker, Fernando Valenzuela for Game 3, Steve Garvey for Game 4, Jerry Reuss for Game 5 and Pedro Guerrero for Game 6.  I think Jay Johnstone would've made more sense for Game 4. 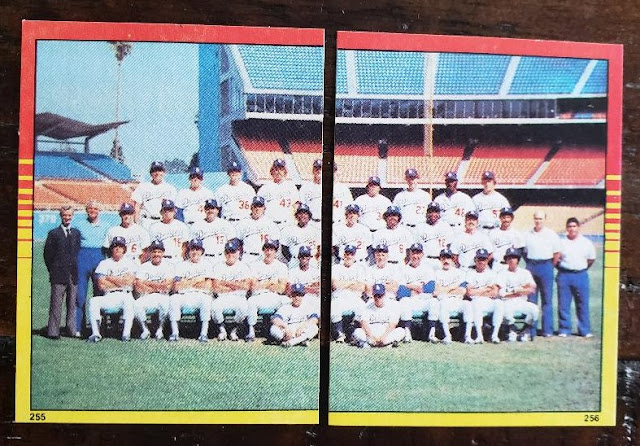 There are also two stickers showcasing the World Series champion team (a precursor to those early '80s Fleer Super Star Special cards).
It sure looks like a team photo taken right before opening day -- I can spot Joe Ferguson in the second row and he was released by the Dodgers in August that year -- but Topps claims they are your World Series champions right on the back. 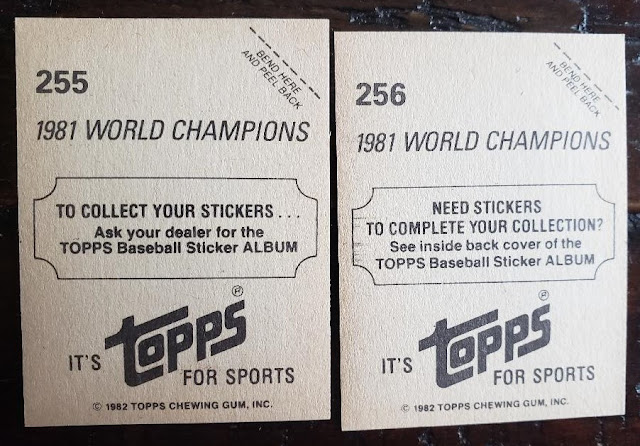 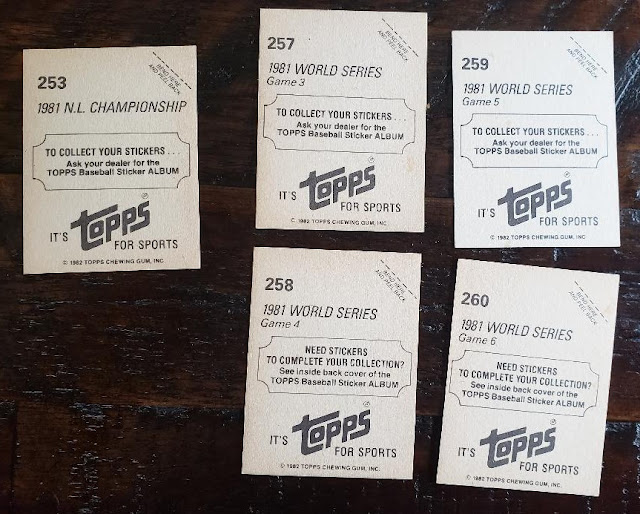 There's the backs of the other stickers. At least Topps tells you which game it is. But there's no linescore from that game or capsule on what happened. Just an ad about getting MOAR STICKARS!!
That's how I viewed stickers at this time. They were a bit lightweight.
I wasn't a kid in the '80s. I was a freshman in high school when the '80s began. When Topps stickers arrived in 1981, I was like, "OK, I collect everything Topps puts out so I'll collect these, too." I mean stickers were fun, sure, but they weren't cards, and they were mostly a side project.
There just wasn't a lot to them, because ... duh, their main intent was to be stuck. What was the point of putting something on a sticker back? 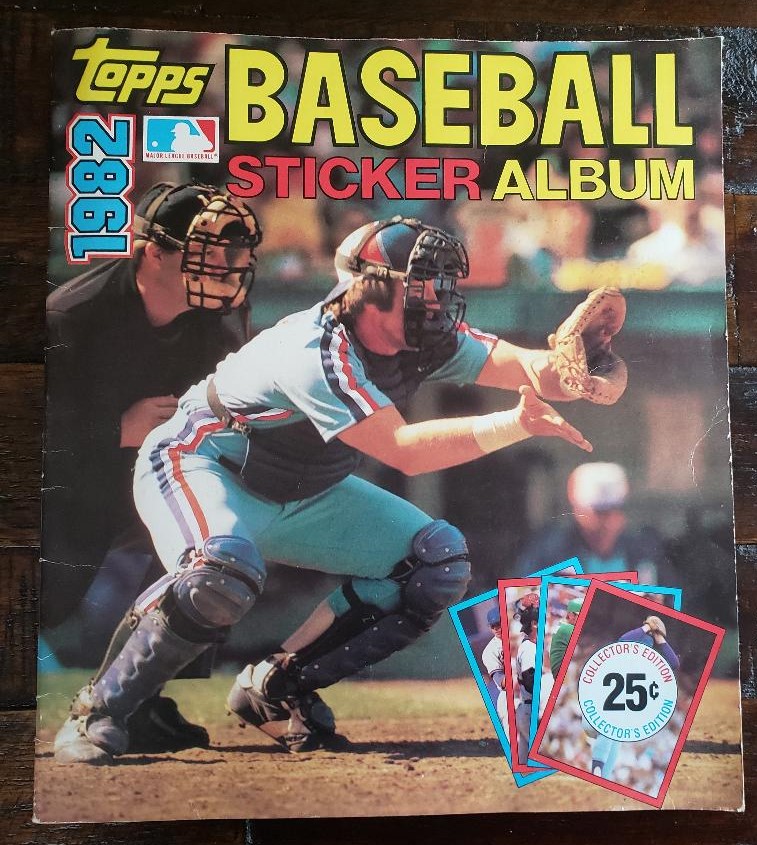 Yup, I have the 1982 Topps stickers album. It was sent to me a number of years ago, all the way from England, but I actually had it in 1982, too. (Then I threw it out, because stickers were for babies).
1982 is my favorite sticker year by far. I own almost all of the stickers from that set -- I'm just missing three of the foil All-Stars.
And, yes, they are all stuck. Because that's what you do -- on a rainy day, or when the boss yells at you or when dinner is burnt -- you stick the stickers and the monsters go away.
I didn't come across stickers a lot when I was a kid. Mostly what I remember are the gold stars or animal creature or holiday stickers teachers put on your papers if you did a good job. I loved when the star was a different color like red or green. That was special.
But I don't remember sticker books as a kid or sheets of stickers or any of that. I guess we were unfortunate with mere coloring books. Or maybe my mom thought stickers were a nuisance and wouldn't buy them for me. Who knows.
But, anyway, the Dodgers stickers are stuck: 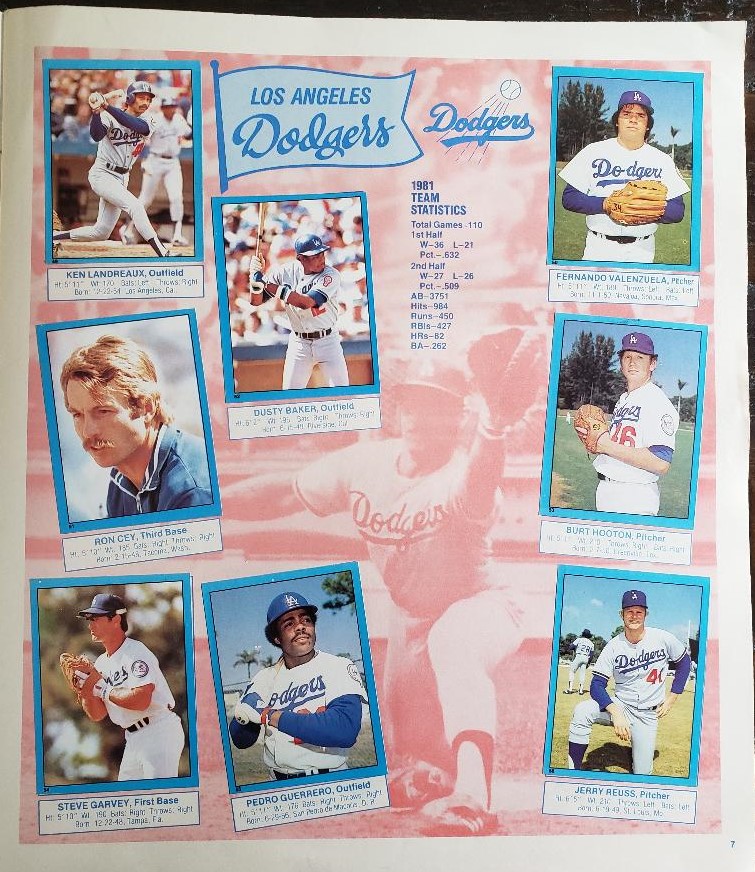 And here is that World Series/postseason page: 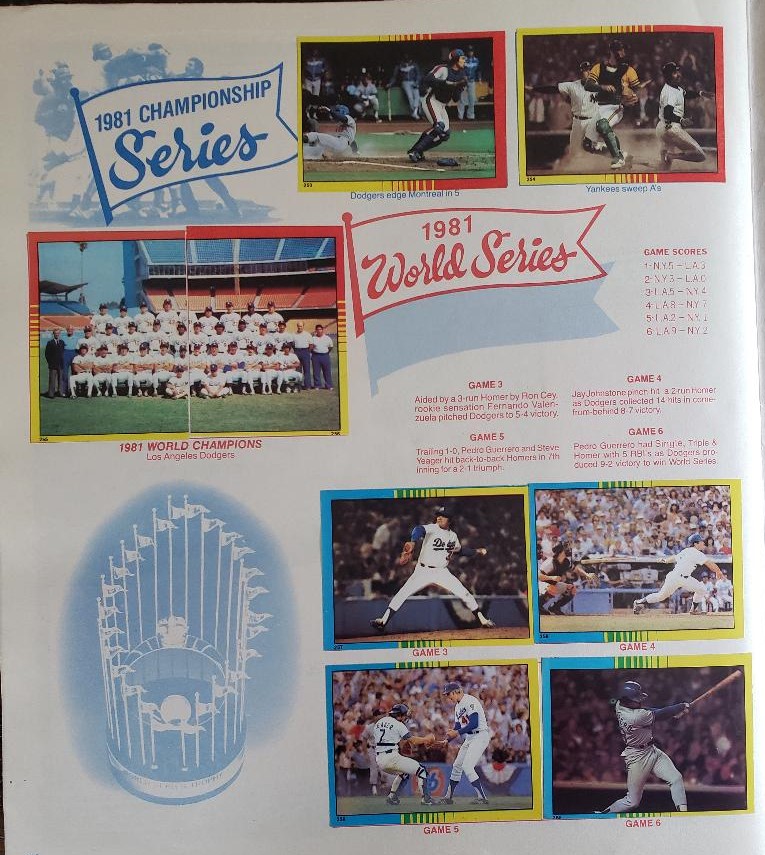 I think so much of those '82 stickers that I got extra Dodgers ones so I could have some to stick and some to leave unstuck.
The page is nice to look at from a historical point of view and the book nicely gives a summary of each game. But I still would have rather seen cards from the 1981 World Series, something with more substance, with all those stats on the back.
As usual, I'm really just about the cards.

Brett Alan said…
Yeah, the stickers are fine, but using the stickers to commemorate the postseason rather than cards, which have more information, was a bad idea.

I guess nowadays you have Topps Now for the postseason games, but that gets very pricey. (I've purchased a couple of big Mets-oriented Topps Now cards from eBay sellers who discount while the cards are live, but I don't see myself buying one for every postseason game they win.) They do have room for info about the game on the back, although Topps doesn't always put that space to good use.

bryan was here said…
That sticker album brings back memories. My sister and I had a competition to see who could fill their album first. I won, but not by much. I'm pretty sure that album is still in my mum's attic.
When my kids were younger, I relived that same competition. I bought each of them a blank album and a box of unopened packs for about $20 for everything. I enjoyed watching them open each pack and sticking them, just like my sister and I did a generation ago.

gregory said…
These Topps sticker books were my introduction to collecting. Such great childhood memories of those foil all-stars! The earliest book I've got is the 1983 version, and my stickers have definitely been stuck. Great post, Night Owl!
October 18, 2021 at 10:59 AM

Jon said…
I was really big into stickers when I was kid, especially Panini's various non-sport offerings. I can remember my mom helping me to stick them into the books (that way they'd look nicer), and filling out the paperwork to take part in the back of the book offer to trade in duplicate stickers for ones that I (we) were missing.
October 28, 2021 at 6:16 PM