Maybe getting the set-blog itch again

When I wrapped up my last set blog more than two years ago, I figured that would be the end for me and set blogs.
I had completed three of them at that point: 1975, 1971 and 1985. All Topps blogs. The second two, 1971 and 1985, I basically wrote at the same time and it was a bit grueling doing those and Night Owl Cards. I was worn out by May of 2019.
Also, at that point, it seemed like set blogs were long past their freshness date. Chronicling a set was the cool blog thing to do back in 2008. But as the cool kids moved on to other things, only the hard-core set-appreciators were left and there aren't many of them anymore.
Still ...
I left open the possibility of writing another one when I finished off the last two. And just a couple days ago a complimentary comment left at the end of my 1985 Topps made me wonder. "Your blogs are great," it said. "I'd love to see a '73 or '74 version."
Now, I'm not going to do something every time someone says something nice, but the thought has always been there. Specifically, I've always thought it would be cool to write a 1993 Upper Deck set blog. It's one of the few notable card sets from the 1960s to early 1990s that hasn't received the set-blog treatment, that I know of.
As for the comment suggestion, both the '73 and '74 Topps sets were part of set-blog tributes already. I wouldn't do a '74 blog because of that, even though I think that set is highly underrated.
There have been two '73 Topps set blogs but I don't think either of them were finished (I could be wrong). It seems like that set needs proper treatment, given how interesting it is.
But the '73 set is a little too close to '71 and '75, and I wrote about a lot of the players who are in the '73 set already.
So that's where I am.
I still haven't decided whether I'm going to do one again. And it certainly wouldn't be before 2022.
But if I did, which would you like to see? 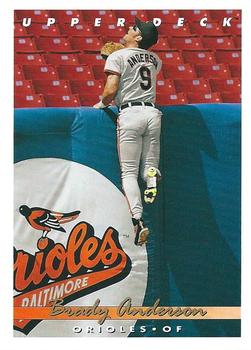 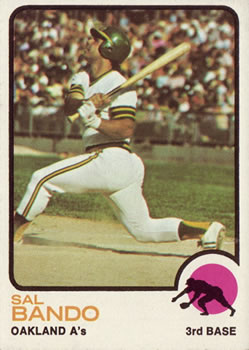 Or 1973 Topps?
(I know, I know, it's up to me).
Leave your preference in the comments. I'd create a poll if making polls was as easy as it was on Blogger five years ago or so. If I figure it out, I'll get one on here.
And if you vote, you have to promise me you'll read it sometimes.

Bill@Bravestarr said…
I think there’s a lot of overlap with ‘73 and what you’ve done. For that reason I say ‘93 UD. I really like that set a lot. It’s one of my favorites from them and it’s also a favorite of mine to get signed. So much color and so many great images front and back.
October 24, 2021 at 8:46 PM

bryan was here said…
I love the '73 Topps set but I would be interested in reading a blog about '93 Upper Deck. Especially the expansion team guys like Scott Pose and David Nied.
October 24, 2021 at 9:29 PM

Brett Alan said…
Yeah, I think the UD one makes more sense because it's players you haven't written about before.

Johnnys Trading Spot said…
Both of those sets are fun filled cards, and loads of them. You can't go wrong either way. I complete the UD way back, and I am waiting on my last few 73's to arrive.
October 24, 2021 at 9:37 PM

Daniel Wilson said…
Either would be great and eventually you’ll probably do both, so it’s really just a matter of which one is first. Let’s go with 1993 Upper Deck first because it’s something different.
October 25, 2021 at 8:41 AM

acrackedbat said…
I've become closely acquainted with 93 UD the past couple years. Perhaps a 93UD blog would seal the commitment between 93 and me, forcing me to obtain the full set. You wouldn't do that to me, would you??
October 25, 2021 at 1:11 PM

Nick Vossbrink said…
Upper Deck would be so much different than any other set bog out there.
October 25, 2021 at 1:12 PM

Jim from Downingtown said…
If impressing "the cool kids" is a factor in writing a set (or any) blog, you are doing it for all the wrong reasons.

I have always posted to my blogs for ME. If others like them, or find useful information in them, so much the better.
October 26, 2021 at 9:49 PM

A blog like Night Owl Cards and a set blog are two different animals, at least for me. I can write on NOC with two readers and it wouldn't matter, but a set blog takes research every post. I'm not doing all that work if no one will read it.
October 26, 2021 at 10:16 PM

Jim said…
As a set blog proprietor (x 3) I get the desire to know people are reading, following and maybe learning something. I've seen a steady decline in readership and commenting over the years on my blogs, but I plug along since they still bring me happiness.

Benjamin said…
Definitely 93 upper deck. I think you like it more and I think it would resonate more with the blog readers. Plus it's one of the great sets of the decade.
November 2, 2021 at 4:18 PM