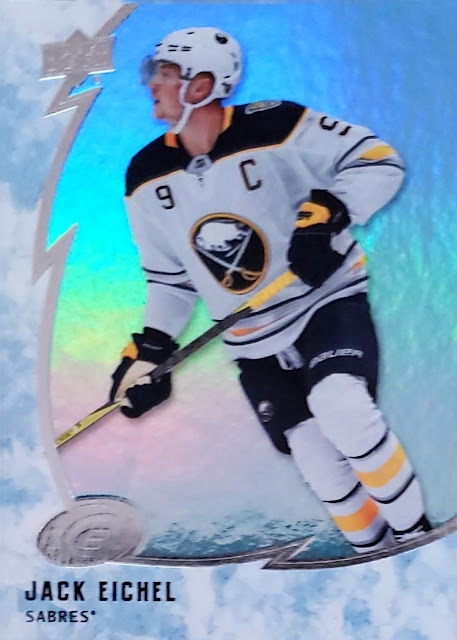 You don't need me to tell you that it's about to get bleak.
Oh sure, it depends on where you reside in the world, but here in the northeast the weather is turning. The latest weekend monsoon transformed an extended Indian Summer into more typical fall weather. Temps in the high 40s and leaves everywhere.
Snow will be arriving in a matter of weeks, if not sooner, and with it, no baseball.
Yeah, the Dodgers still have a shot, they've come back from 0-2 deficits before and the Braves have blown 0-2 deficits before (the Dodgers have also blown an 0-2 deficit -- anyone remember the 1978 World Series?). But without Max Muncy, Justin Turner, Clayton Kershaw, an ability to hit with RISP and an overwhelming desire to change the pitcher the likes I have ever seen, there is just too much I can't ignore.
Baseball is almost over, no matter what. And the chances are good your team and my team isn't going to win. Again. And then that'll be it.
Then what's left?
Football. That's fun. But it's not baseball.
There's hockey and basketball, two Inside Sports that just don't have the atmosphere I prefer. Baseball is played outside (mostly), in a casual atmosphere (playoff hype excluded), with sunshine and hot dogs and is generally peaceful. Hockey and basketball rely on dance squads, sirens and glitz for their appeal. It's OK. But it's not baseball.
We make do in the Northeast because there's no way we can play baseball between October and April. Folks in Buffalo live and die with the Bills, especially now, because they're good.
It's a fun time. And it takes your mind off the weather. And there being no baseball.
The Bills are so good these days that we keep having to stay up for night time games now. That's no problem for me, but other members of the family don't do so well lasting the whole game.
But I'll be up and while I am, I'll look at the new Bills cards I just got from Doug at Sportscards From The Dollar Store! 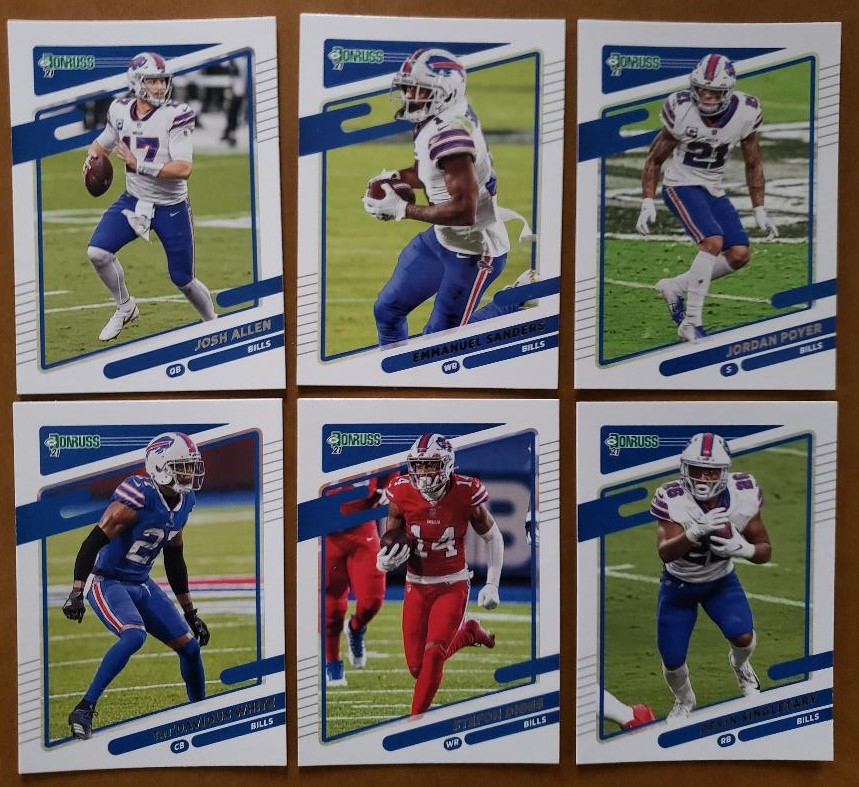 There are the boys right now.
They'll be in action in a matter of an hour or two against the Tennessee Titans, who I know are good but I still can't take seriously because I'm old and a complainer and I want them to be the Houston Oilers. 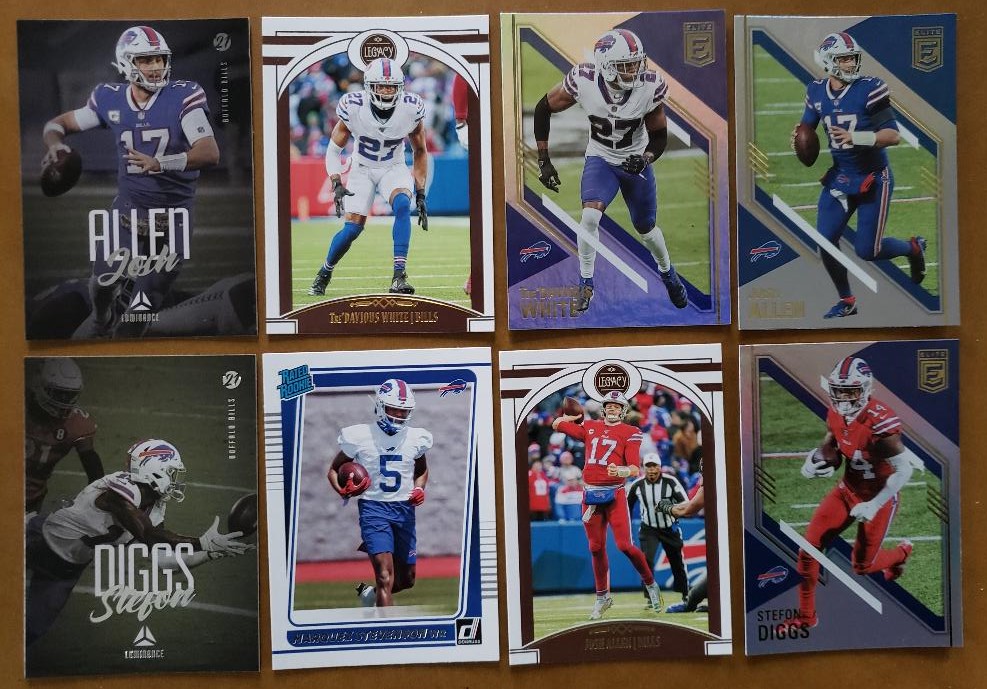 More Bills! I'm not familiar enough with modern football cards to know what most of these are. I try to put them chronologically in my Bills binder but it's comically out of order, cards from 1995 sorted with ones from 1991 and forget about the late '90s, I'm sure all of those are wrong. 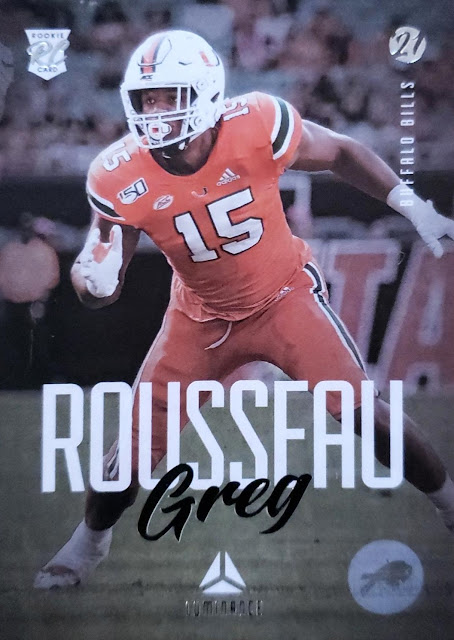 I don't have a lot of use for cards featuring a player in a college football uniform, but it's Greg Rousseau who has already looked good for the Bills and ... and ... note that cute little Bills logo in the corner! 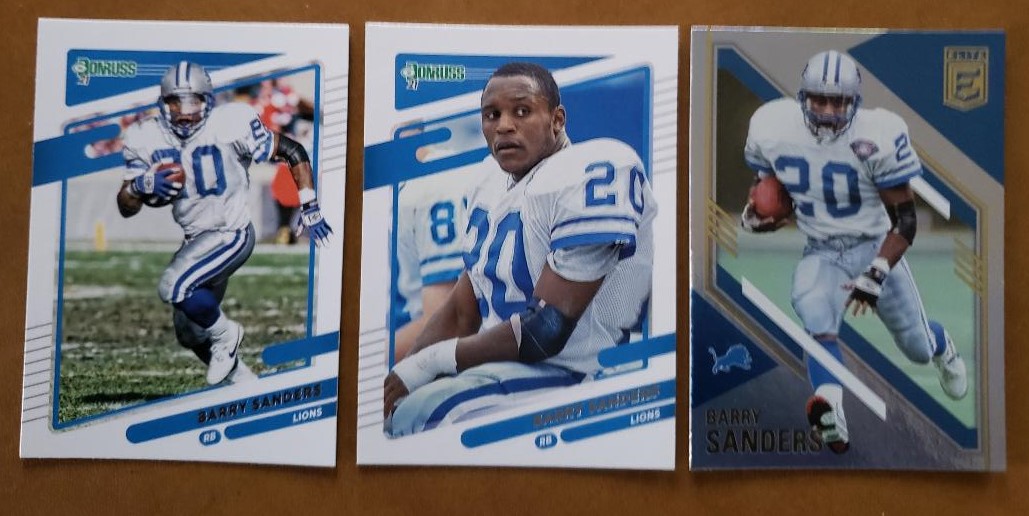 Aww. Doug remembered my birthday.
Barry Sanders is the most prominent sports figure born on my birthday who isn't Shoeless Joe Jackson. Some would argue Sanders is more prominent than Shoeless Joe and I would say, "that sounds like something somebody would say when it isn't baseball season." 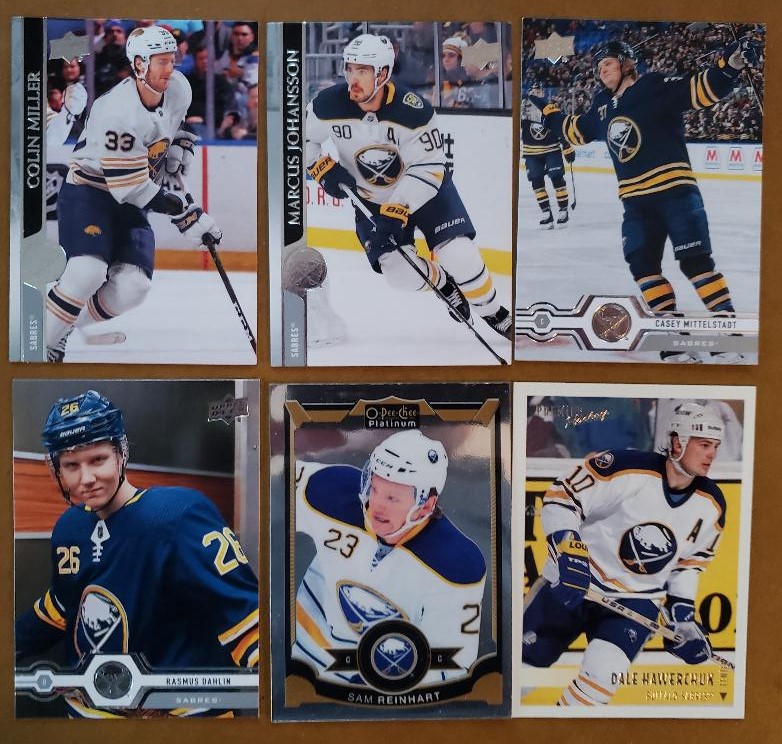 Doug always sends some Sabres, too.
The Sabres don't get any of my attention while baseball is in action and I barely even switch to a game while football is still going. But by February I'm so baseball-deprived and there is NOTHING sports-wise on the TV, that I'll turn to the Sabres, who are probably in last place by that point, or some college basketball game while counting the days to spring training in my head. 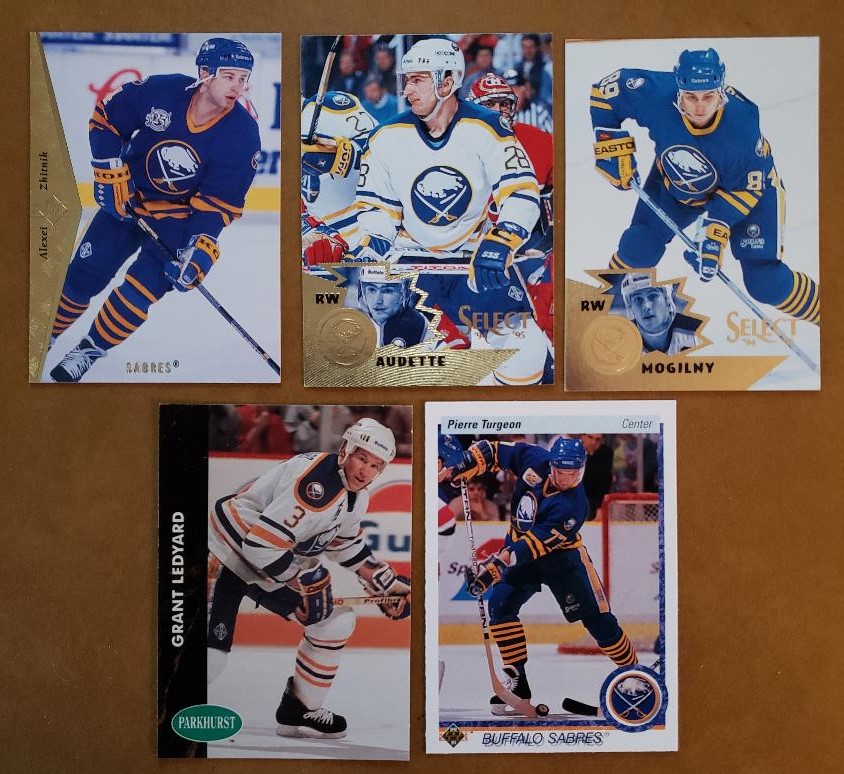 Older Sabres. I don't do any better job of putting these in the correct order in the Sabres binder. 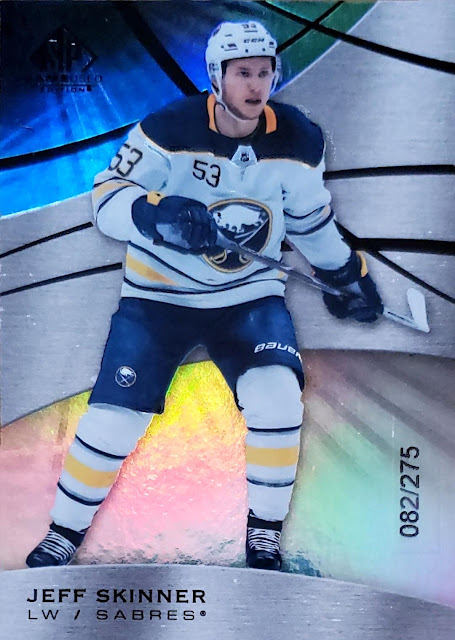 I scanned this separately because it's shiny. And it's a card of a player who has managed to stay with the Sabres for four whole years. That's not easy to do.

The best hockey cards, though, are of course those from the 1991-92 Pro Set ... set. Doug always sends some of these, probably in hopes that I'll someday get that want list up on my blog. But I still haven't ruled out just buying the whole thing for the 20 bucks or whatever it is.
Some of you are probably reading this and wincing at all the football and hockey, especially anyone who is a more hopeful Dodger fan than me.
I know, I need to have faith in the team. They did win the World Series last year, right? Snap out of it! They are one of only four teams left playing!
OK, let's get back to baseball: 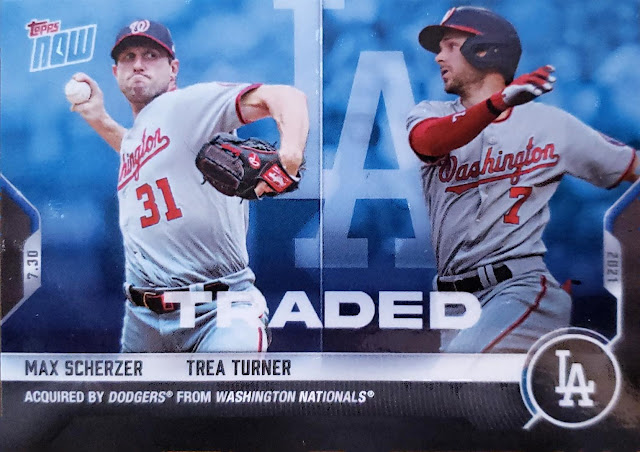 This is my first Dodgers card of both Scherzer and Turner! Max didn't last as long as we hoped last night, that Giants series took a lot out of the Dodgers. Turner has been hitting into some bad luck lately. He deserves better. 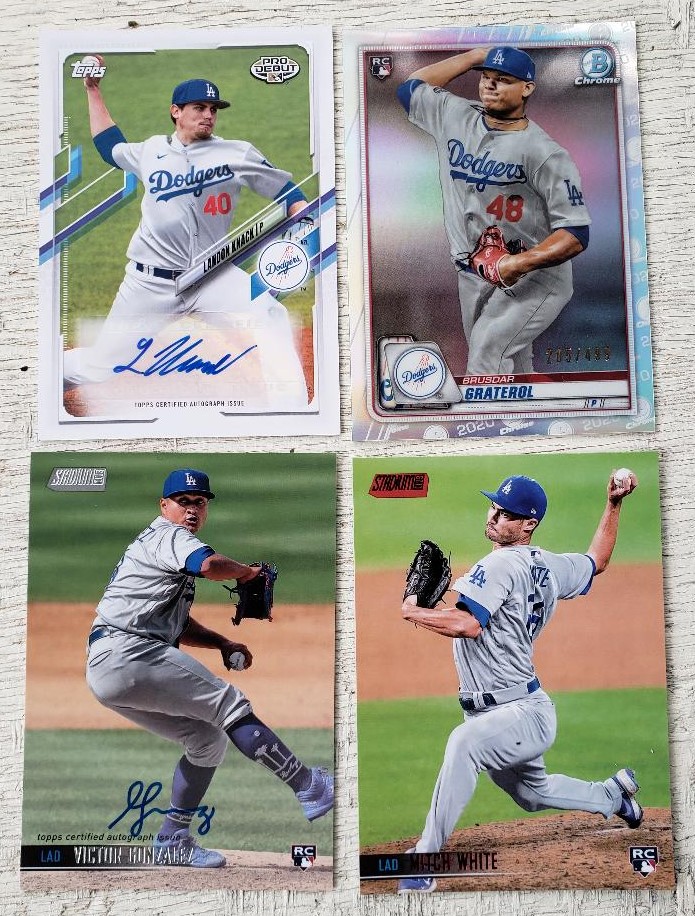 Ooh, fancy stuff. My first autograph cards of Victor Gonzalez and prospect Landon Knack. With Knack I am hoping I get his autograph early ahead of a superstar career, kind of like I did with Kershaw and Buehler. 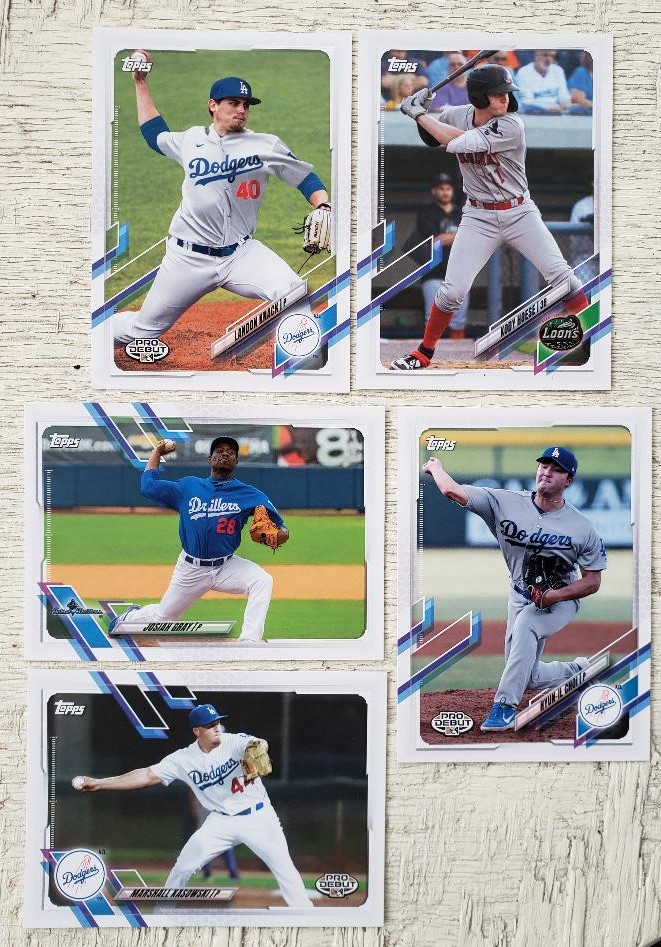 Finally from Doug, my first 2021 Pro Debut cards!
The future! (Well, not Josiah Gray).
There's a reason to look forward right there. Brighter days are ahead, too.
This gloomy weather and inside sports where the viruses grow are just temporary. We'll be back in the sunshine with a beer and a seat along the first base line in no time.
In the meantime, Go Bills.
And Go Dodgers.

Johnnys Trading Spot said…
Outdoors is great. Sunshine is awesome. And one way or the other your team or my team are moving on....at least for another week.
October 18, 2021 at 8:12 PM

bryan was here said…
I'm an outdoor sports guy myself. I do love me some hockey though. I have both the Penguins and Blue Jackets in my viewing area, and now that it's on ESPN and TNT, I'll be watching a lot more.

It is sad that there is a nip in the air, it reminds me that the days are getting shorter and it's time to put the Cadillac away for the winter...
October 18, 2021 at 9:31 PM

Matt said…
AT least your NY football team has a great shot. Other than the Tenn and PItt game they look pretty unstoppable.
October 20, 2021 at 8:23 AM