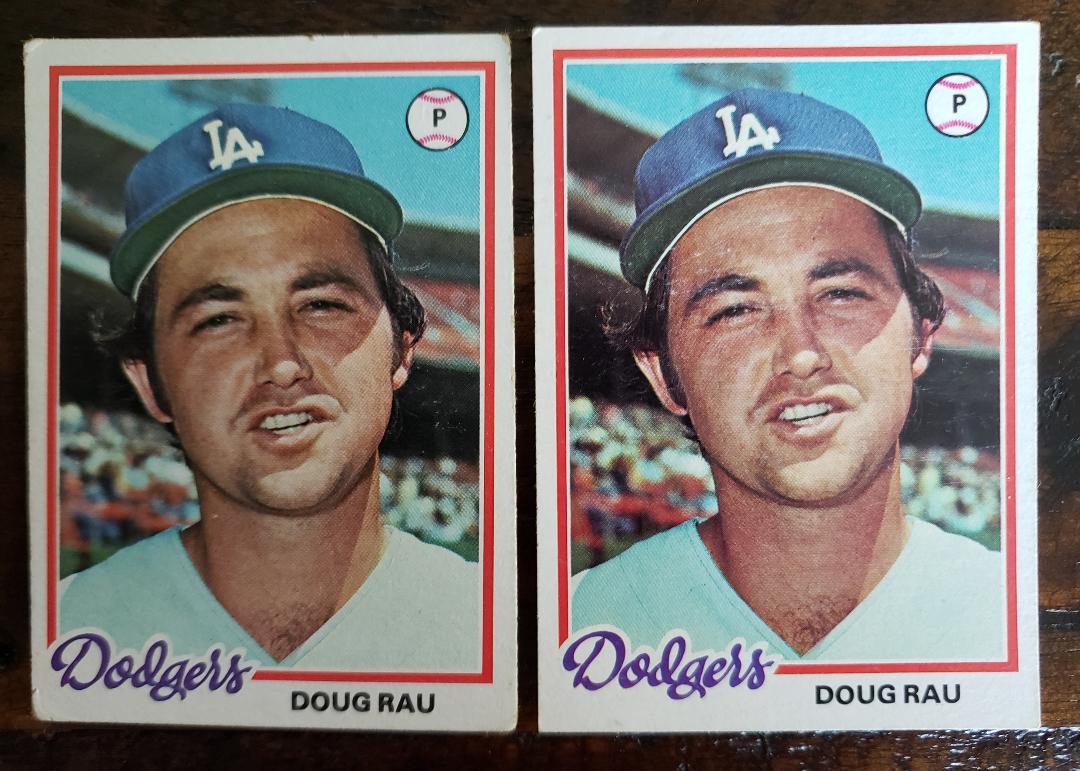 As much as I proudly wear my "kid in an adult body" badge everywhere I go, I cannot avoid that I am an adult -- one of advancing age.
I follow a kid's game, I pursue a kid's hobby. I've been known to watch cartoons, play video games and insist on dessert.
But it's a losing battle. I'm not a kid.
One of the best hobby examples I have is my compulsion to upgrade the sets I collected as a kid.
One of the first things I did when I re-entered the hobby in 2004 was pursue the first set I ever collected, the 1975 Topps set. I went about completing it. And because I was an adult, I upgraded the condition of the cards, too.
The kid part of me, who didn't think about card condition at all -- average wear and tear anyway, I never wrote on my cards -- was gone. I guess the ensuing years of shopping for clothes, cars, appliances, a fricking house, taught me that condition mattered. There was no going back.
So, my '75 set was completed and upgraded. I did that many years ago. The '76 Topps set followed. All upgraded. Then the '77 set.
Now it's time to upgrade that 1978 Topps set.
By 1978, I was 12. I was a lot more careful with my cards than I was two or three years prior. In fact, I thought I was super careful, which convinced me for years that I didn't need to think about upgrading it.
By '78, baseball and baseball cards meant the world to me. In 1975, I became acquainted with baseball cards and that there were some guys on those cards. In 1976, I made the connection between the guys on the cards and the guys playing baseball on TV. In 1977, I started regularly watching the guys play baseball on TV and collecting the cards.
In 1978, I wanted to do it all, all the time -- watch every baseball game I could, collect every baseball card I could, read every baseball story I could. I was immersed in the game, 1978 marks the beginning of that time in which I could tell you every player on every team, an era that lasted until 1983 or so.
With such care and interest in the game, surely those cards collected by a 12-year-old are pristine.
But not to this adult.
This is why recently I've posted a want list for upgraded 1978 Topps cards. Just the other day, reader Dave spotted my post about that list and sent me several of my upgrade needs.
Here are just a few, with the upgraded card and the original card side-by-side: 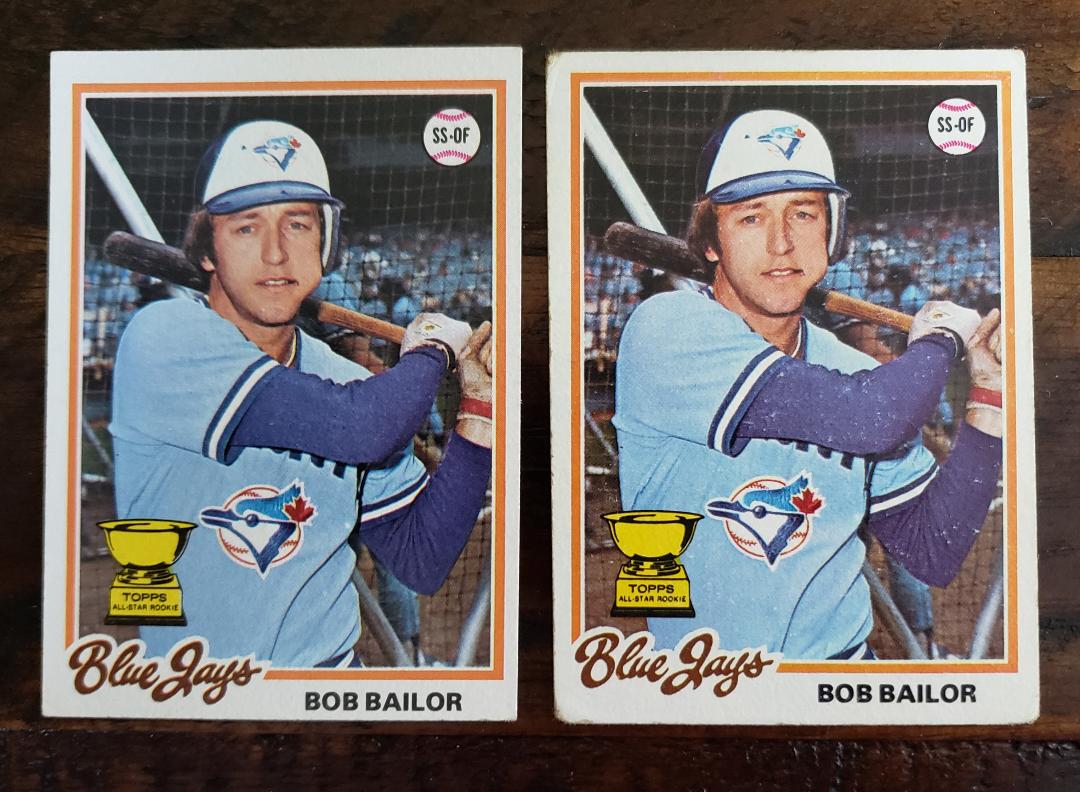 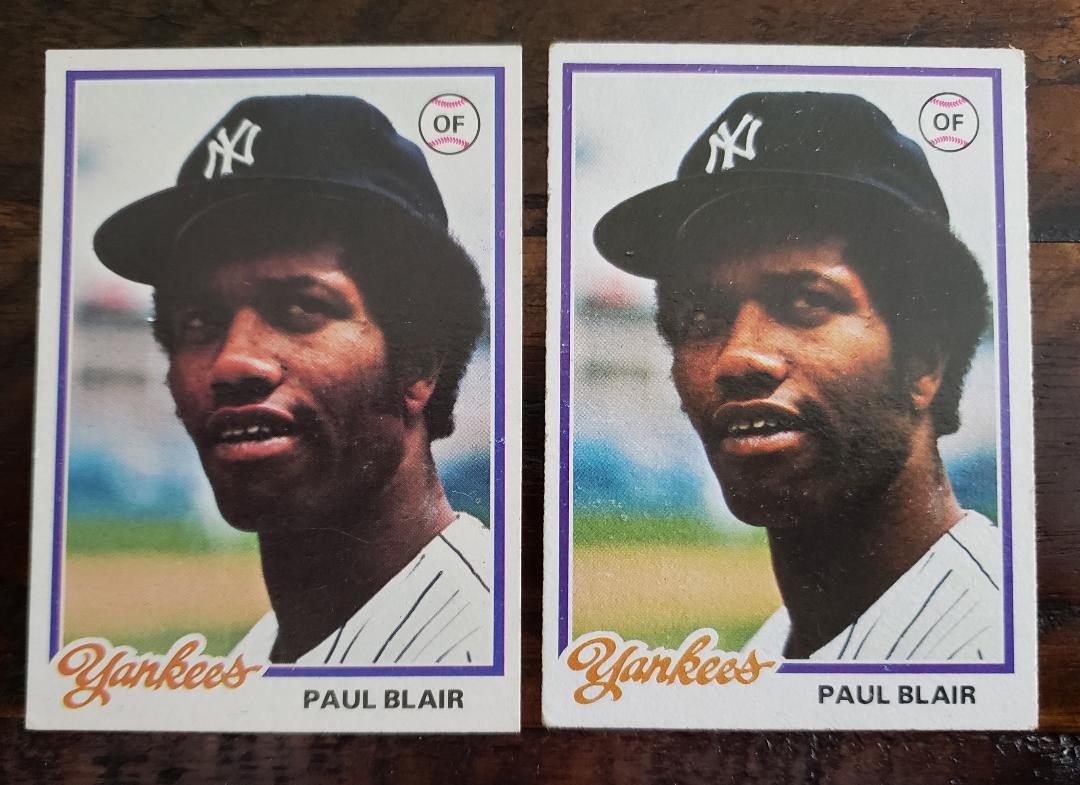 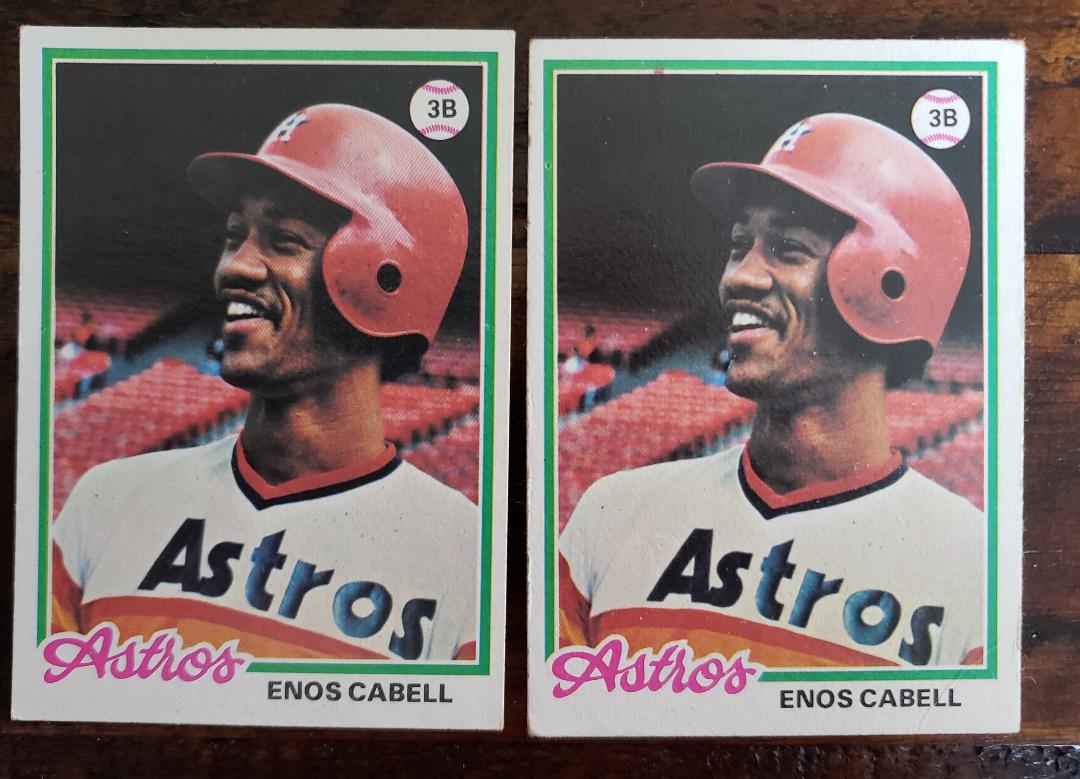 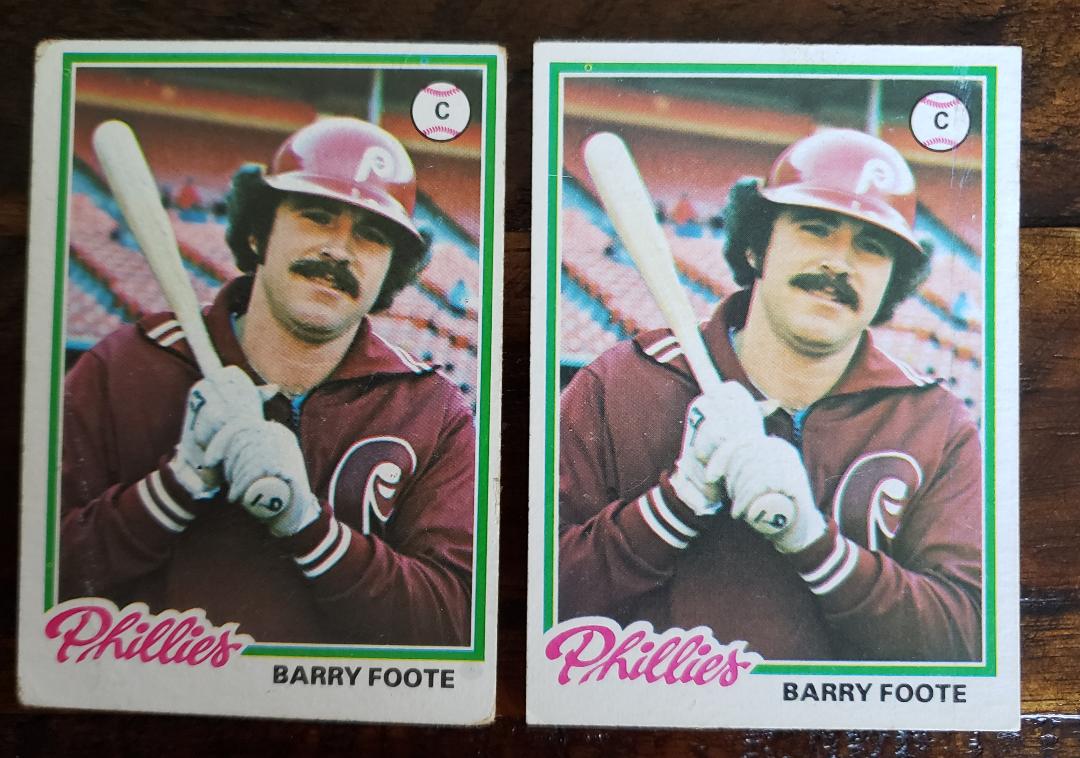 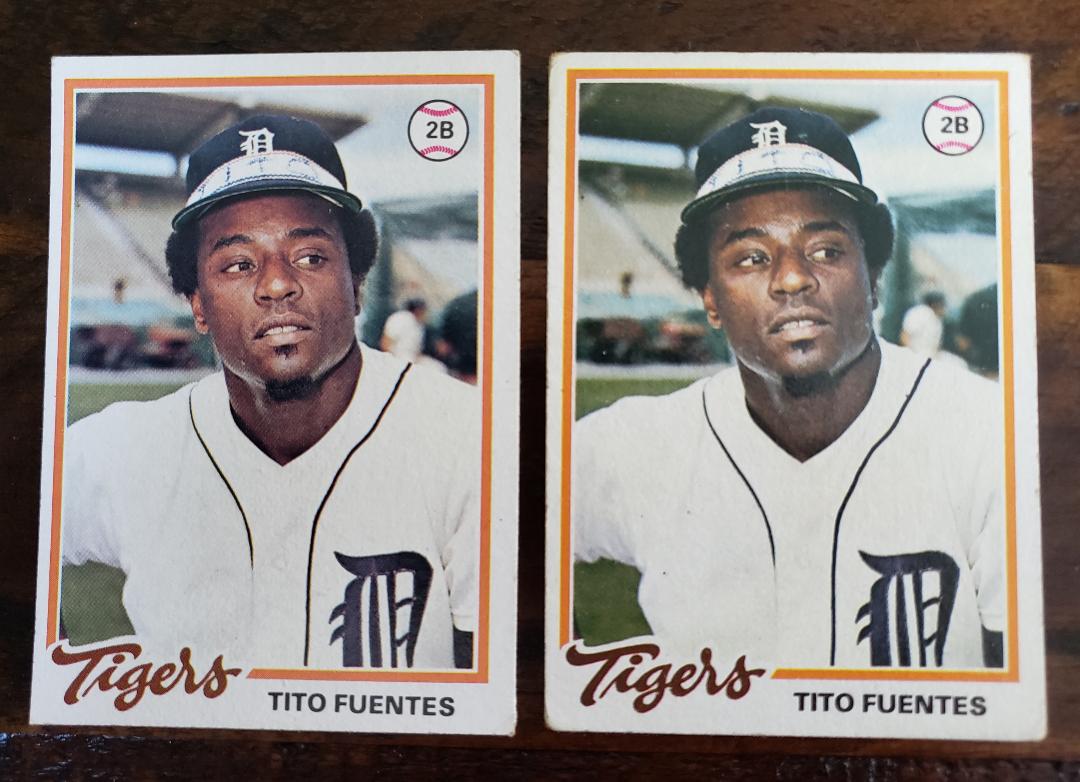 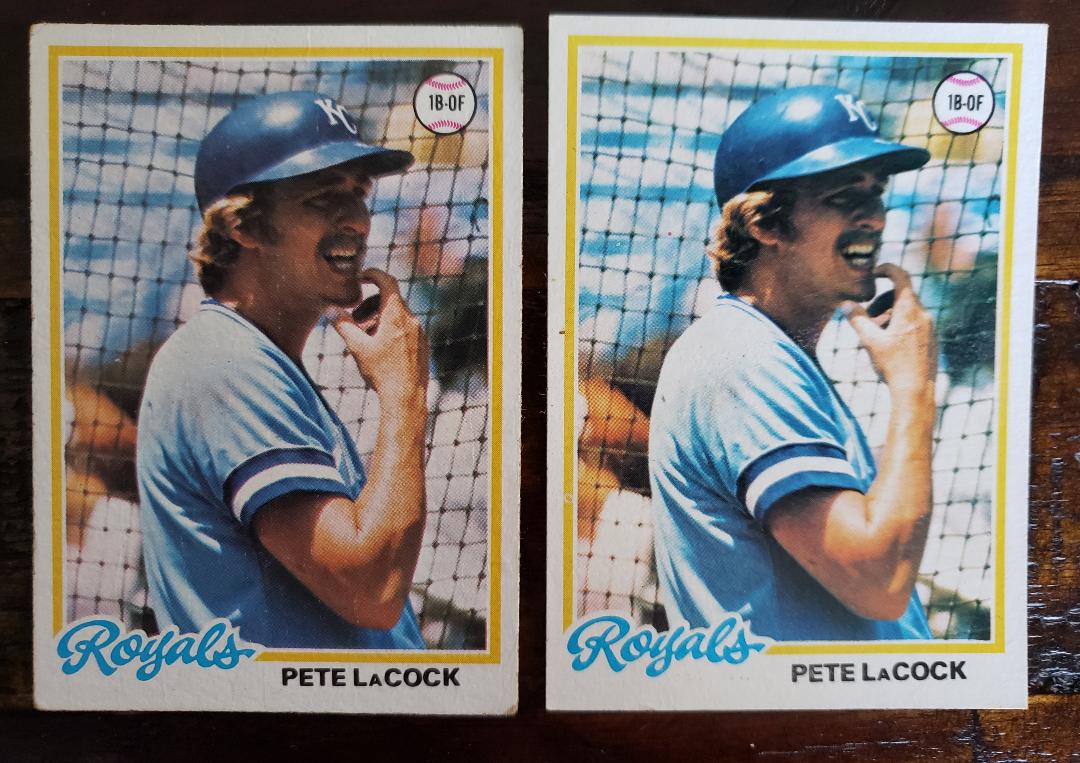 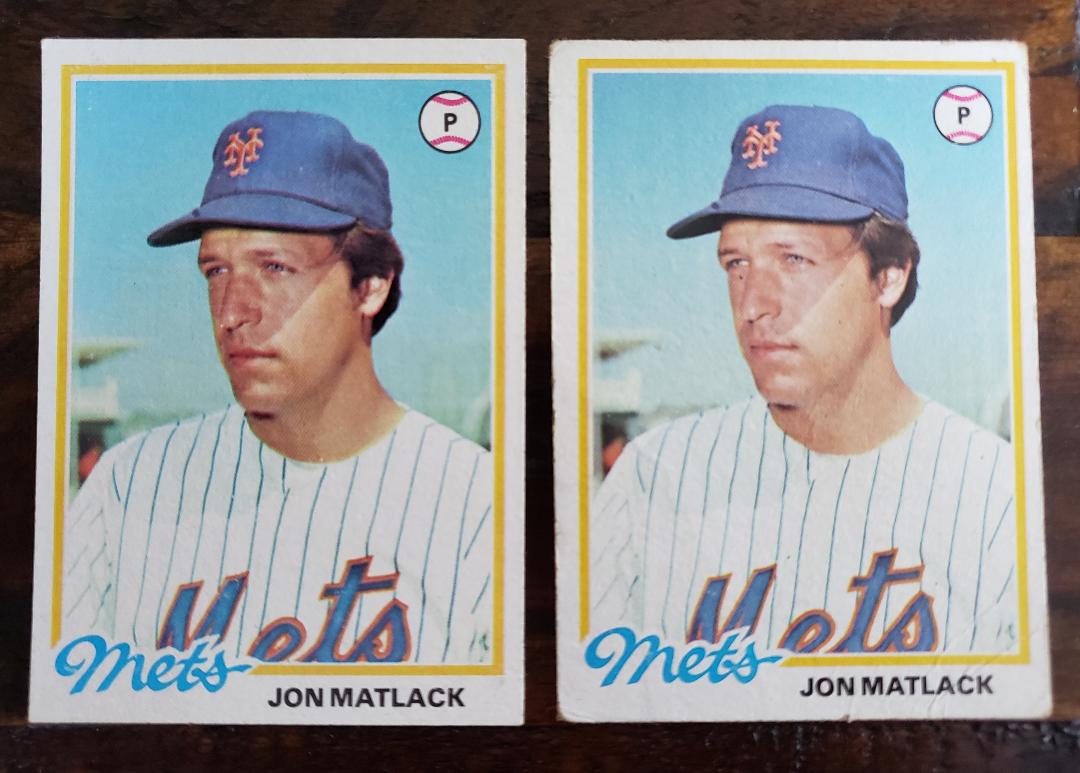 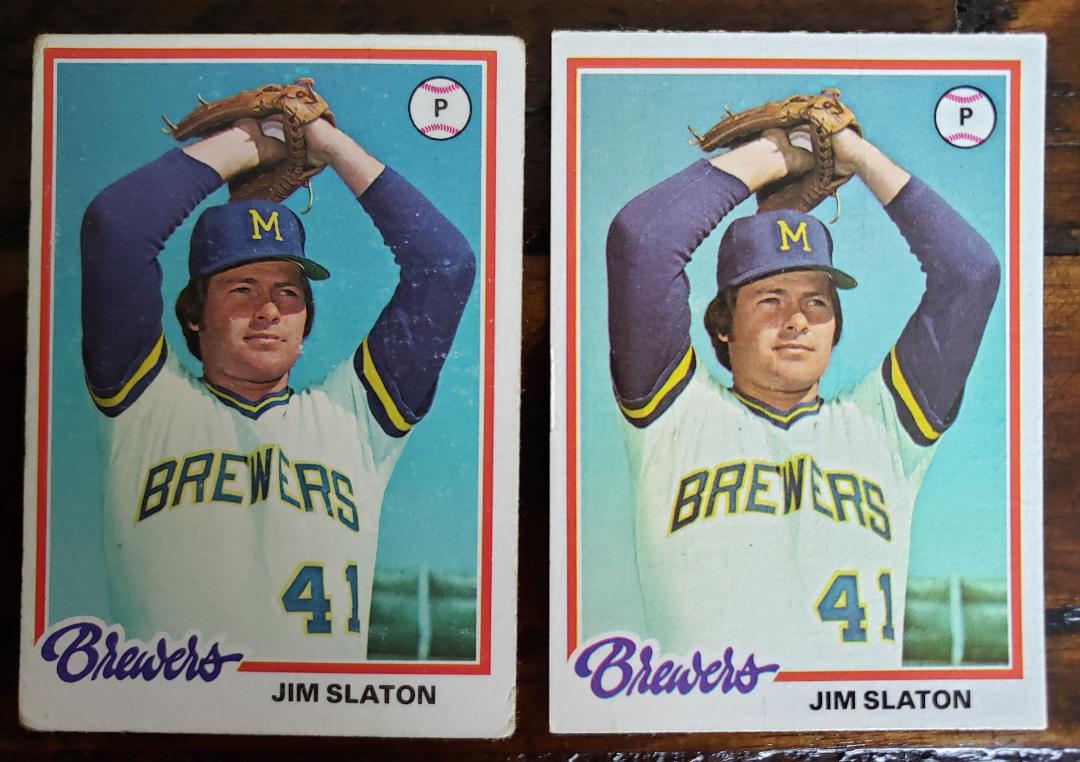 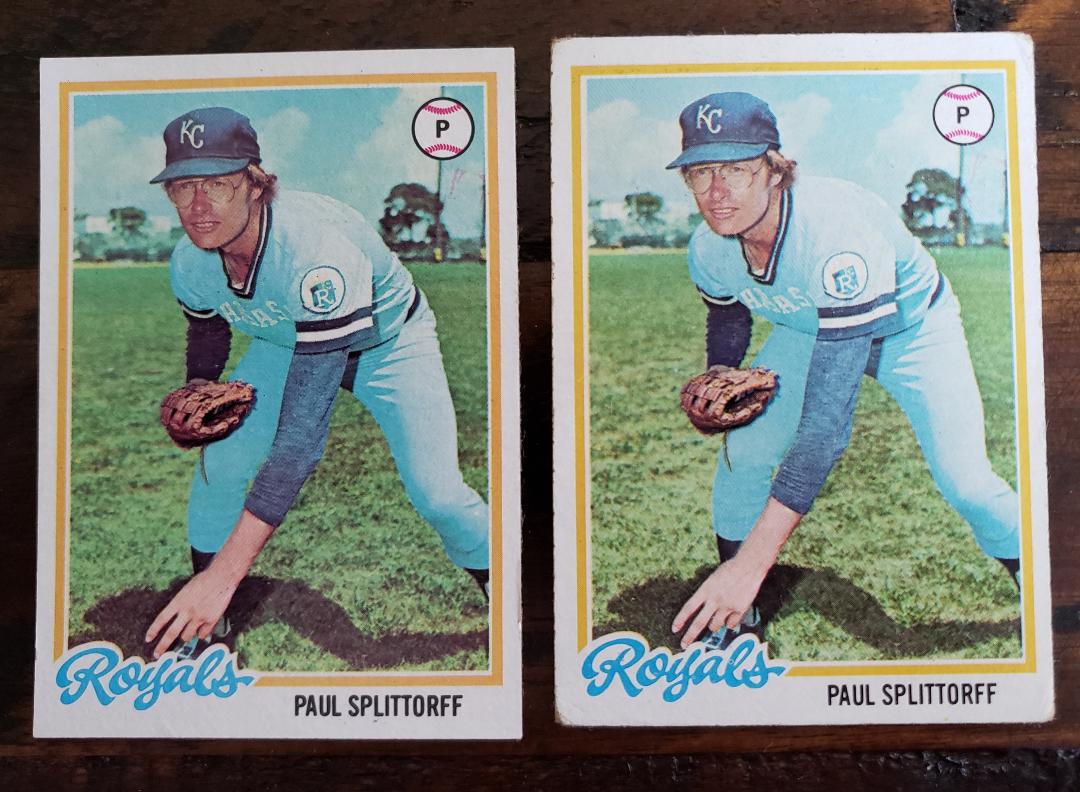 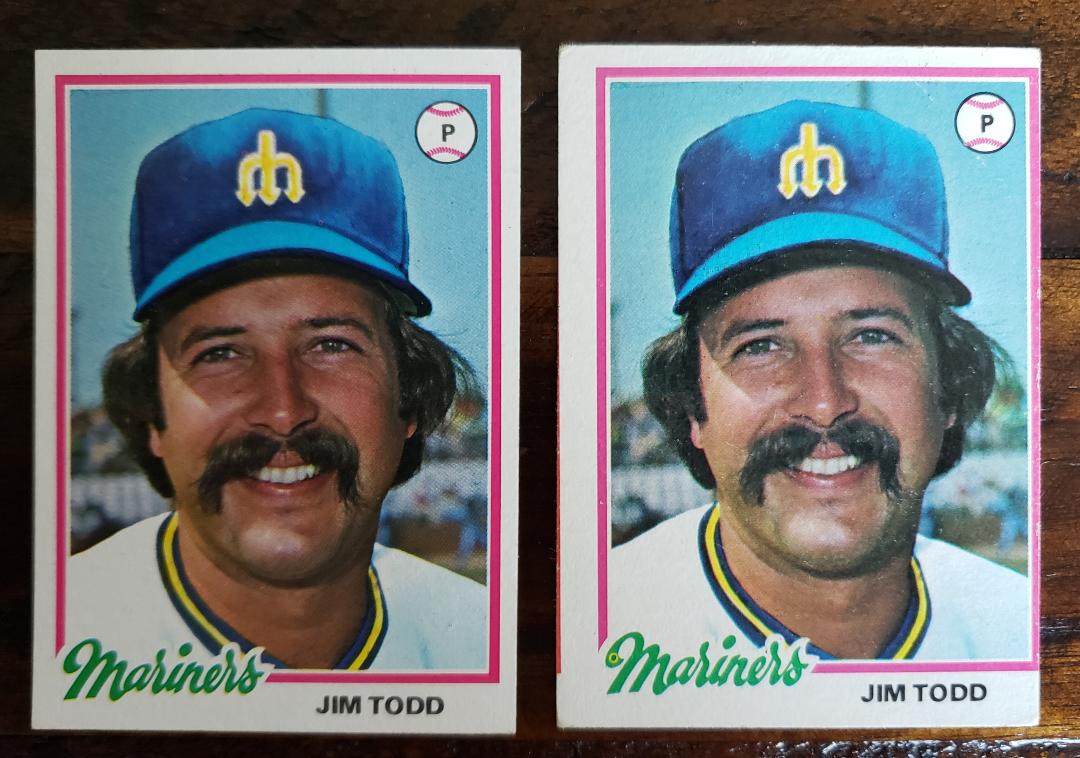 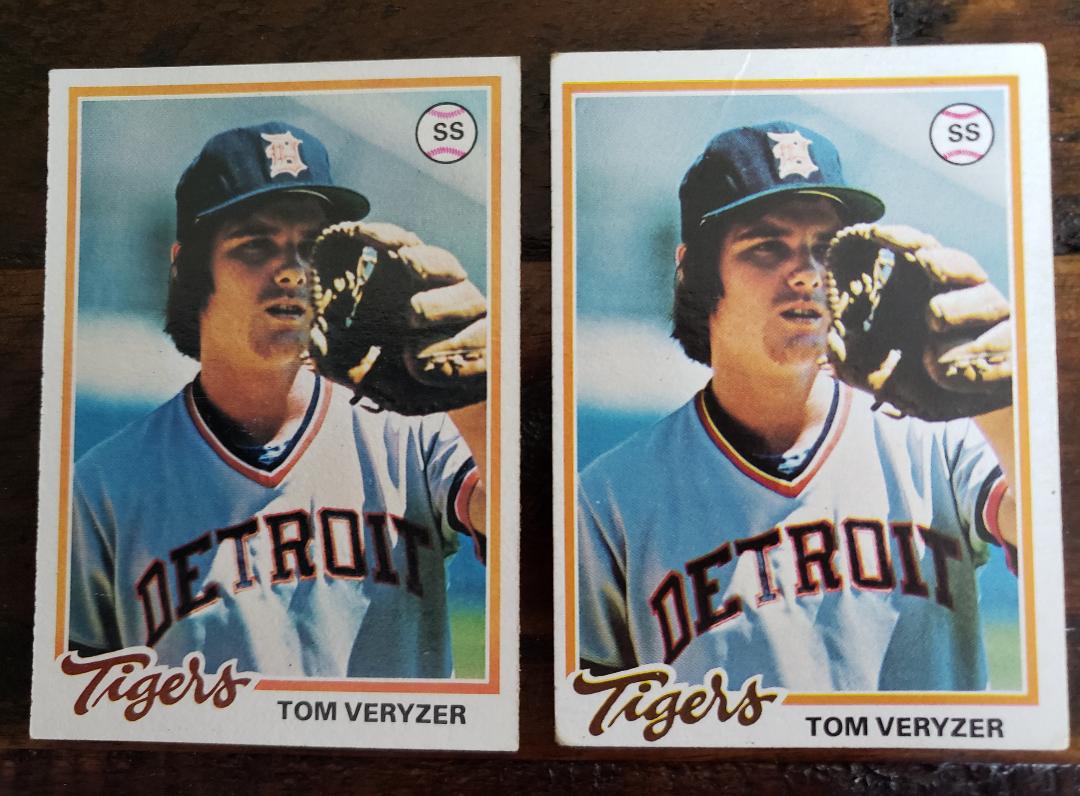 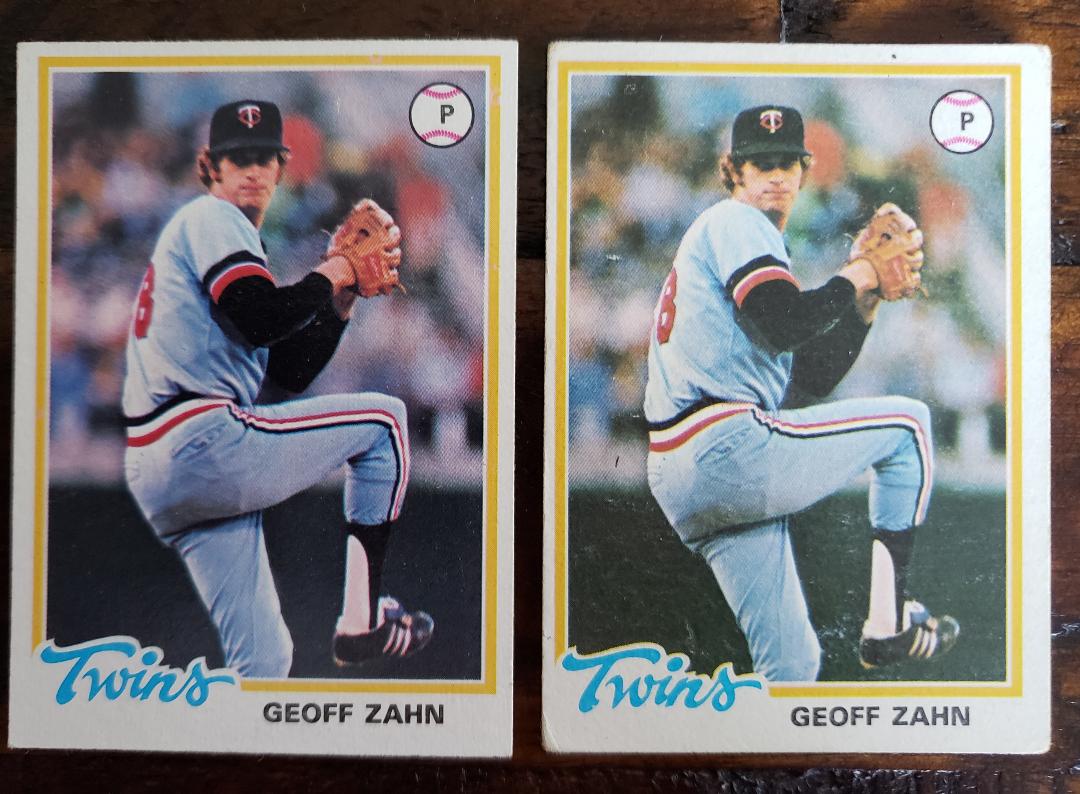 Some of what's "wrong" about the original cards may be tough to see, although I made the images as large as I could.
They aren't drastically off-condition. I'm sure they would fit nicely into somebody's collection (maybe another 12-year-old). In most cases, I am upgrading cards with rounded corners, tiny creases, scuffing and paper loss. 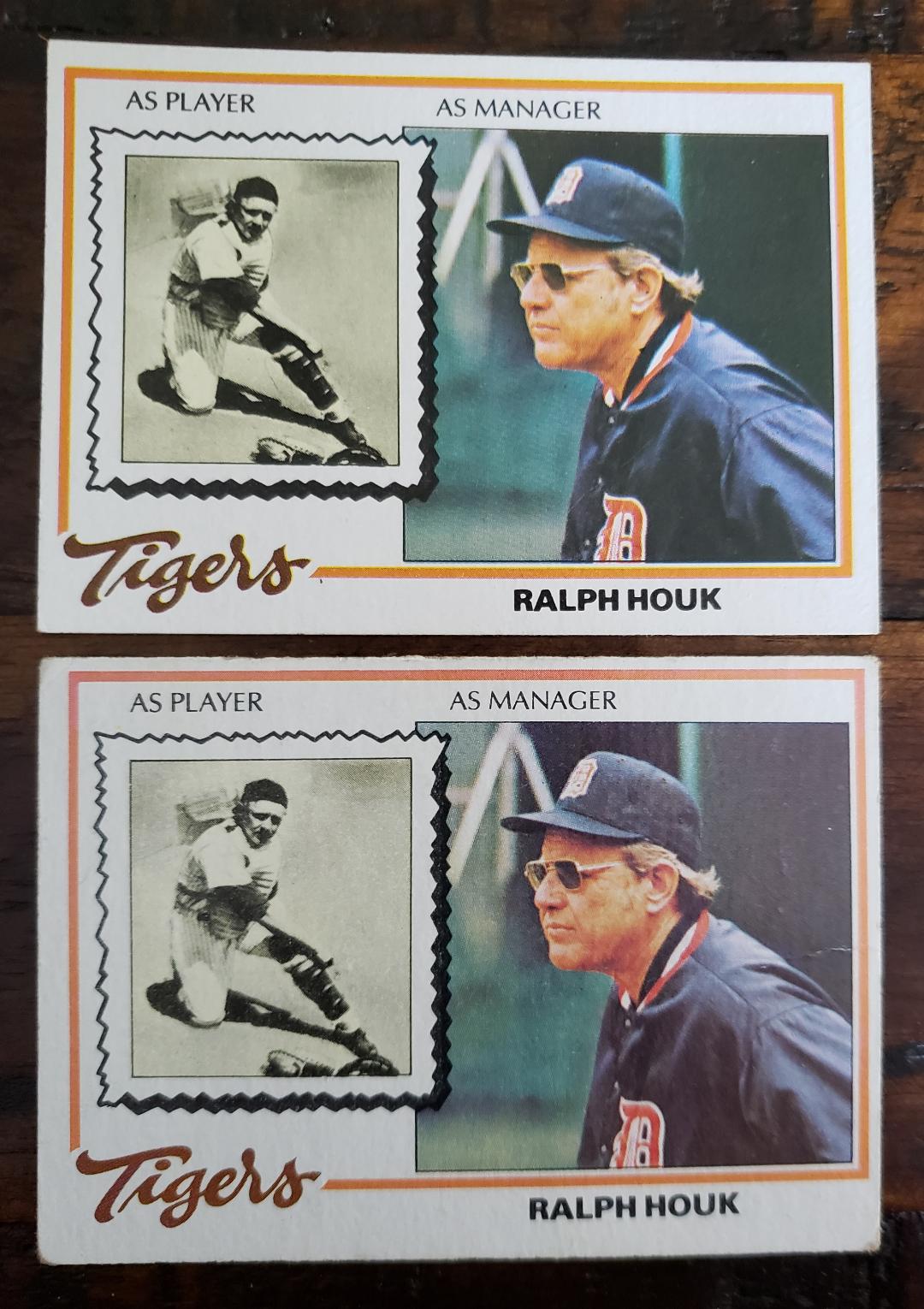 Upgrading these makes me happy. The replacements aren't perfect but they work by my standards. So in that way they are perfect.
Unlike the '75 set, where I have my originals -- in much more loved condition than these originals -- framed and hanging on the wall, these '78 originals don't speak to me. I don't have a lot of memories about collecting those first '78s.
Mostly what I think of when I look at my '78 binder is "man, I really played with those things still, huh?" 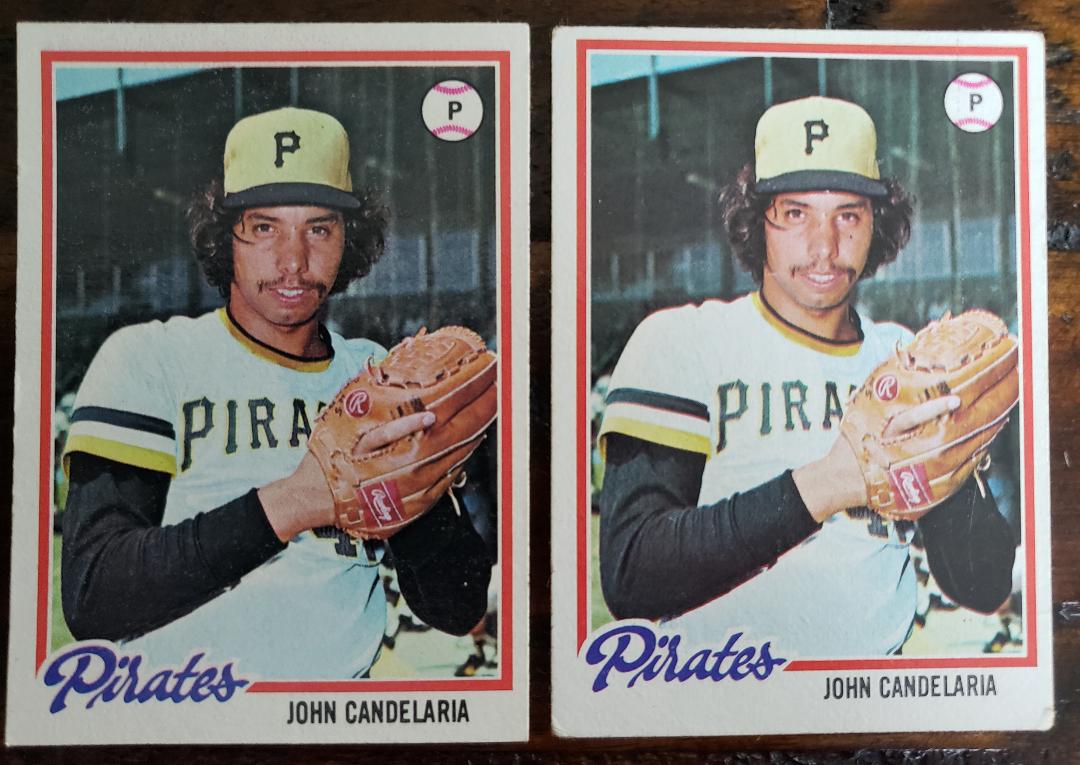 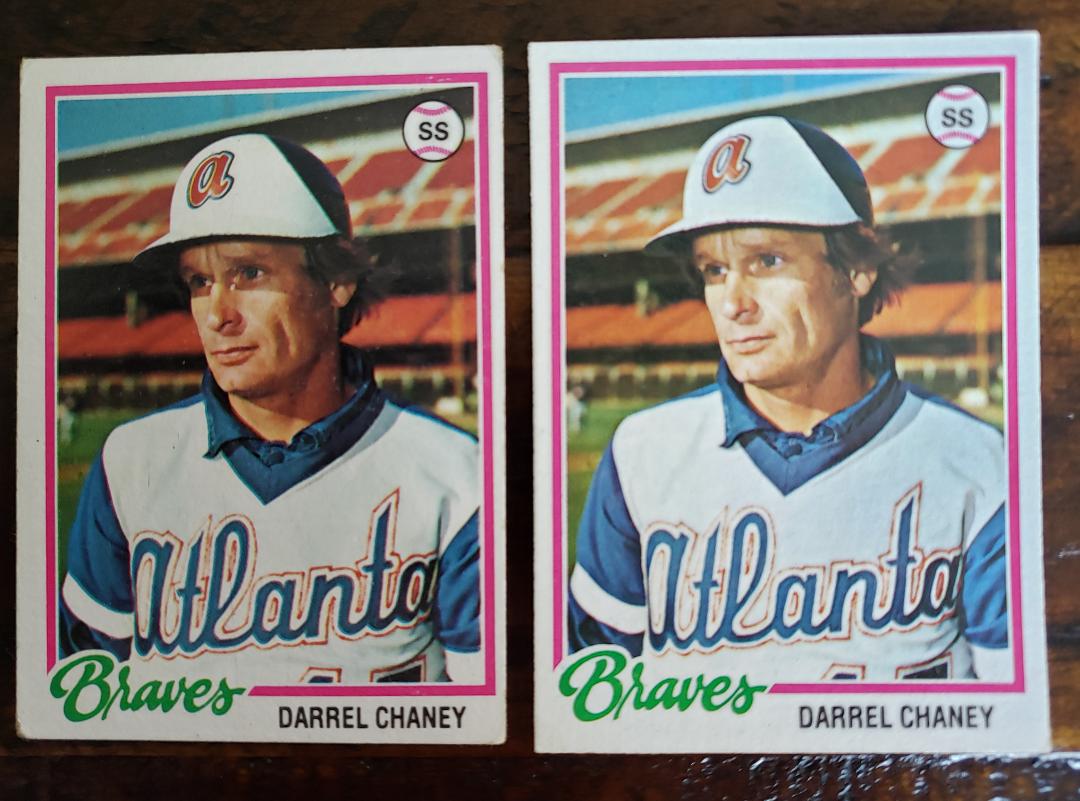 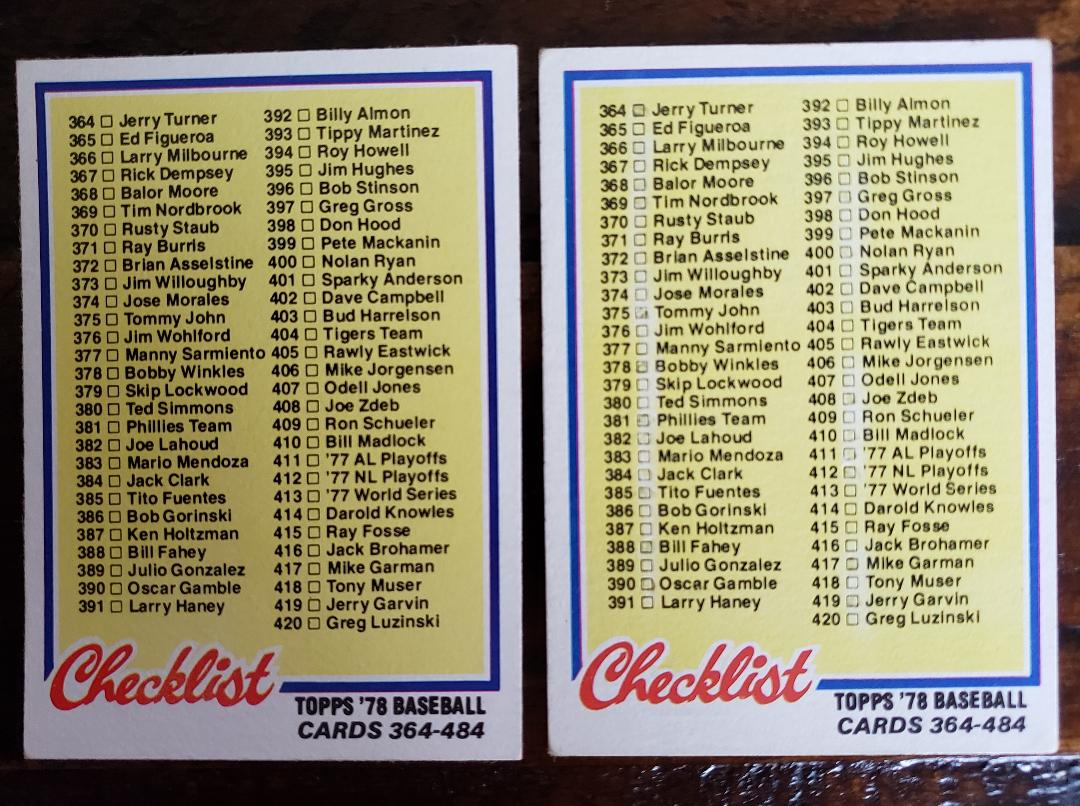 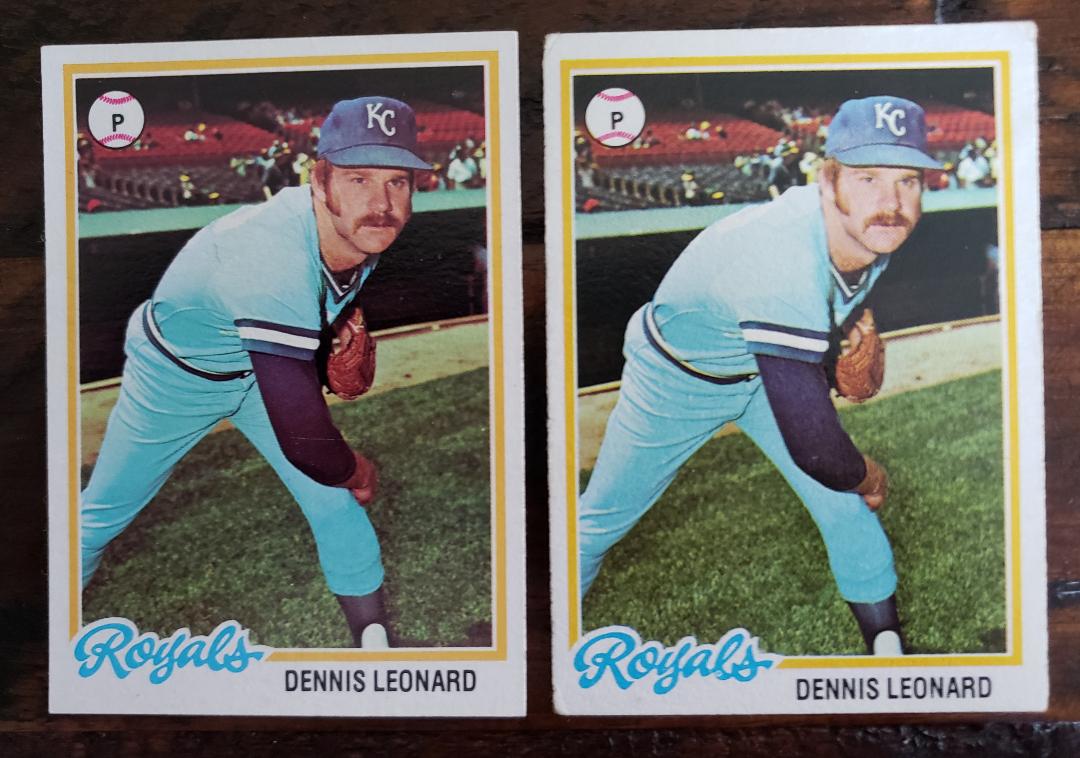 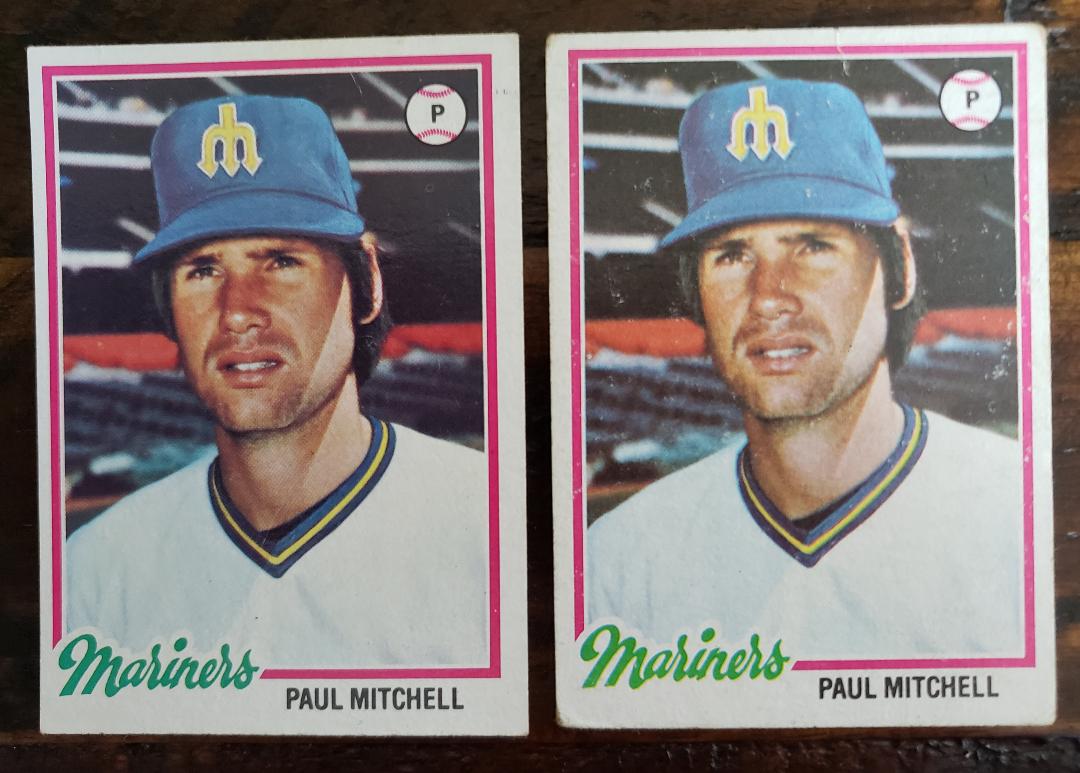 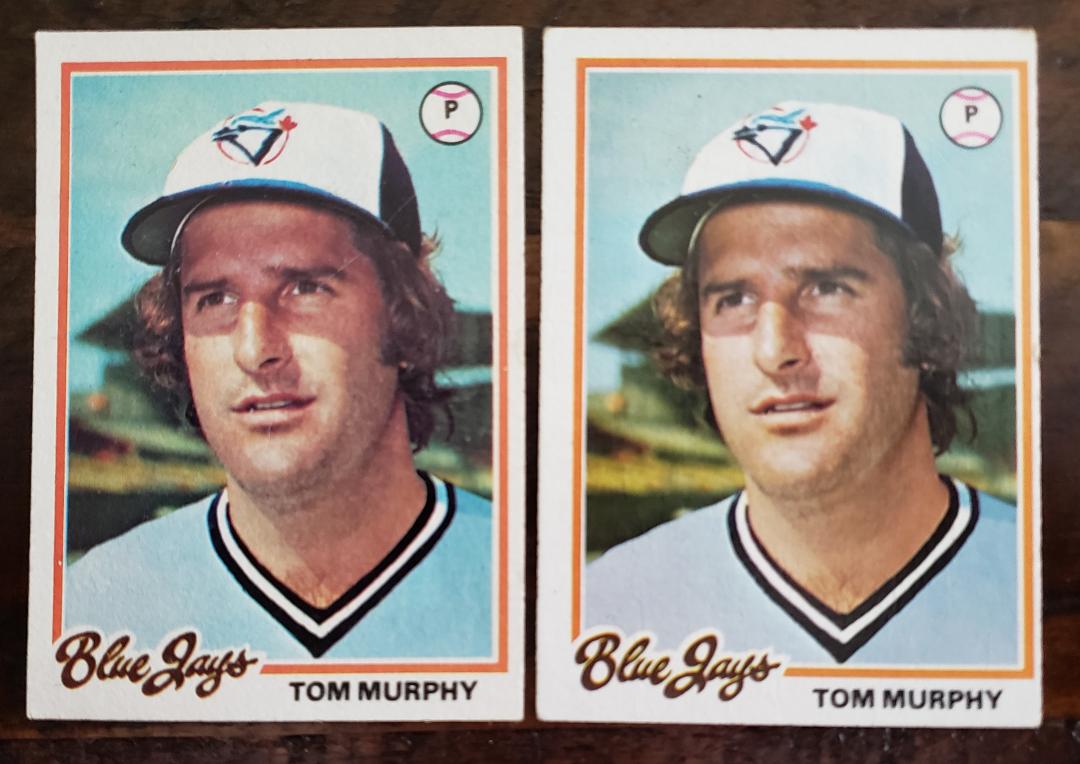 A few more.
And a bunch of others where I didn't pull out the original card: 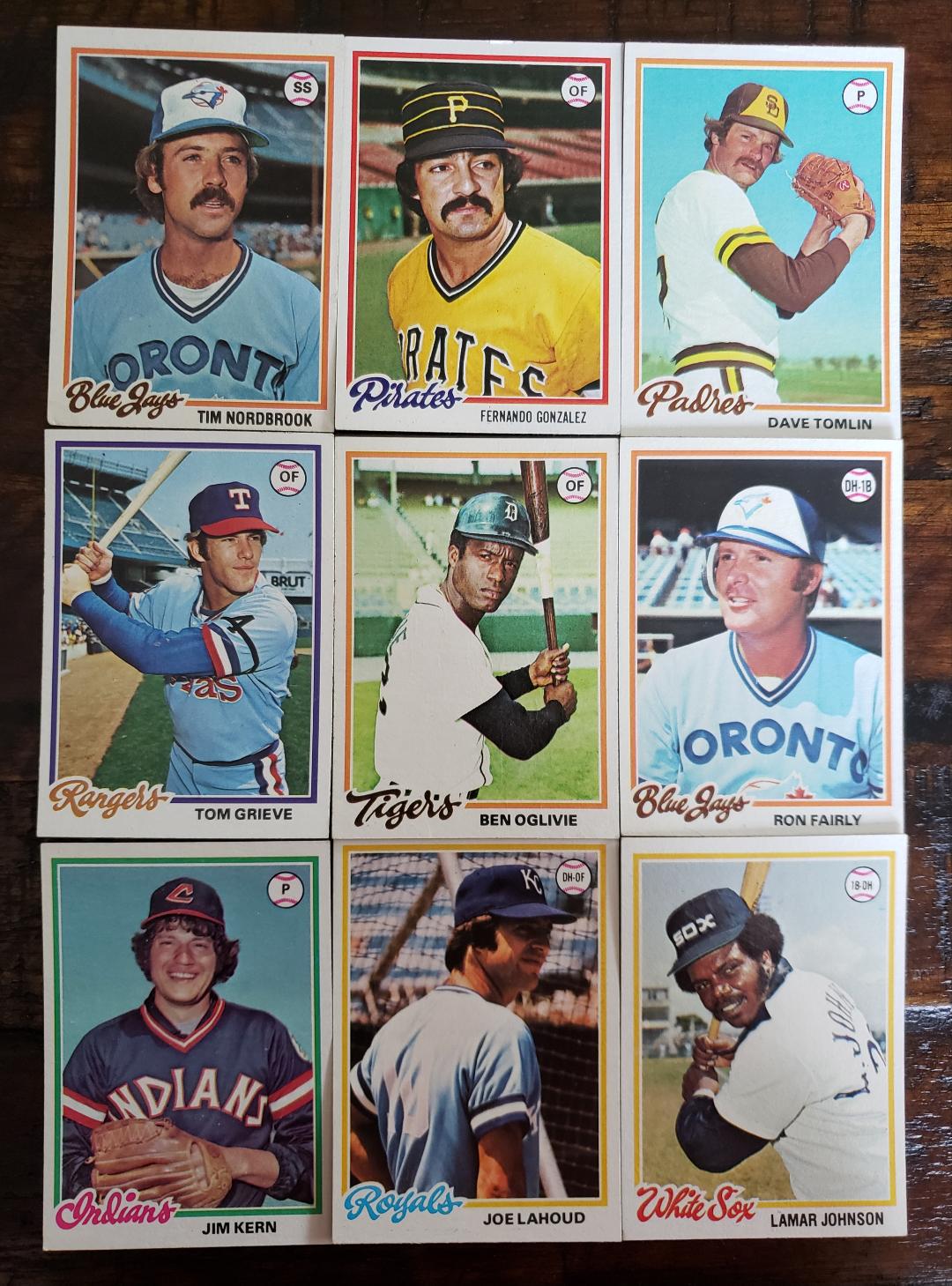 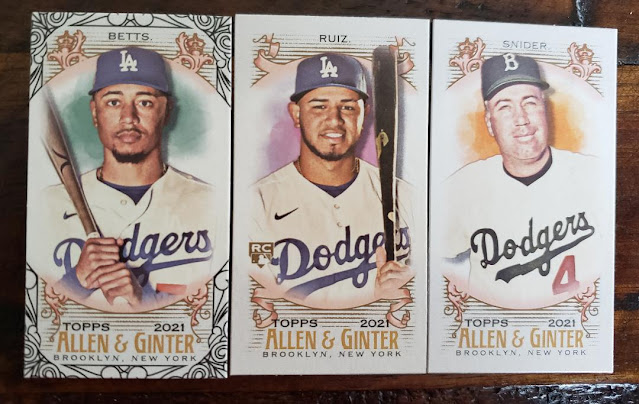 If you're bored by minis, too, I can't help you.
In some ways, I'd love to be one of those collectors who never thinks about condition and is fine with a card that contains a piece of crusted-on food from 50 years ago.
I'm not one those collectors. (But I'll never be the grading type either).
Sadly, I am an adult, who might be just a bit too discriminating.
That's OK. Do what makes you happy, you know?
The 12-year-old wouldn't care. He's probably just pleased I'm still watching baseball and collecting cards.
(P.S.: The replaced '78s are available for someone who isn't as condition sensitive).

Old Cards said…
I exited card collecting about the time you started, so I did not collect 78 topps. It is a good looking set, but I did notice there does not seem to be a lot of cards with action shots. Always thought of the 70's as the era of action shots.
October 21, 2021 at 8:41 PM

Chris said…
Like most collectors I've definitely been trained to keep/acquire cards in as close to mint condition as possible. I've also been working on upgrading older Topps singles for my set builds, but in this case it's 1986 & 1987 Topps Football.

bryan was here said…
I'm almost finished with my '78 set and I still have the cards I started out with, given to me by my one neighbour who was a couple years older than me, shortly after I started collecting. For the most part, they're in decent shape, maybe about 10 or so with creasing (nothing terrible, corners mostly). I can't bring myself to upgrade. Those cards helped shape my collecting to this day.
October 21, 2021 at 10:27 PM

Nick Vossbrink said…
I should look through my set and see what's so beat up I can't deal. It might just be he Ralph Houk card (mine has wood glue on the back) but I feel like I have a couple other beaters in there amidst the soft corners and off-center trims that have never bothrred me.
October 21, 2021 at 11:20 PM

Michael Ott said…
Nice! Guess I missed your post seeking upgrades, and I have mainly off-grade OPC from that era, but I can cross a couple more off your 78T upgrade list.
October 22, 2021 at 8:50 AM