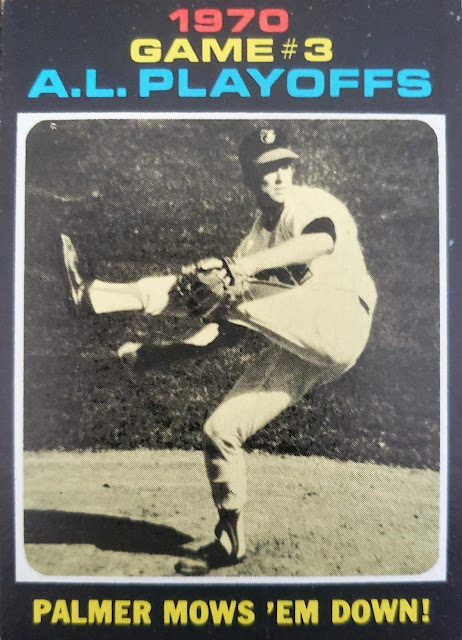 The Dodgers have made it to the LCS, even though I had prepared myself long ago for an Astros-Giants World Series.
Sure, call me a pessimist, but I lived through the '90s with virtually not a single rooting interest succeeding. Also, the Giants enjoyed that kind of charmed season that usually ends in a title. I had that "destined" tag on them since May (Darren Ruf? Come on).
Now that the Dodgers eliminated the one team I most wanted them to, I am relaxing a bit. Sure, I'll get riled up when the LCS against the Braves starts, but it won't bother me nearly as much if they advance. Yeah, an Astros-Dodgers repeat would be ugly (although I know folks with no dog in the fight will consider it great theater). But let's set that aside now.
Everyone is always overlooking the LCS.
No, not your local card shop.
The LCS! The League Championship Series!
Often the LCS contains more thrills and spills than the World Series. I can think of many a World Series that was a letdown after one or both of the LCSes. (LCSeses?). One of my favorite baseball-rooting memories as a kid were the 1977 and 1978 NLCS meetings between the Dodgers and Phillies. Lots of drama -- that down-to-their-last-out comeback in Game 3 of the '77 series contained more excitement than some entire World Series -- although I realize I am biased because the Dodgers won both.
Baseball cards haven't been all that interested in the LCS either, preferring to focus on the World Series, which I understand. But, geez, cards have downright ignored the LCS many times.
When the LCS first began in 1969, it was a novelty and Topps -- the only card company in the land at the time -- treated it as such. 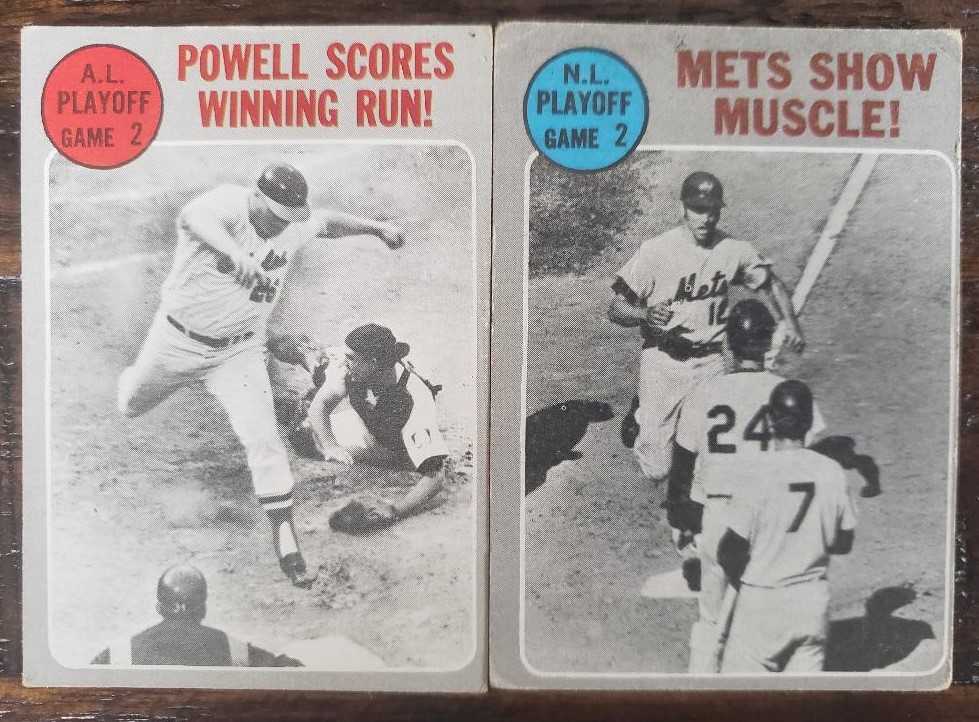 For 1970, Topps dedicated a card to every game in the 1969 ALCS and NLCS, plus a separate card celebrating each of the winning teams' celebrations! 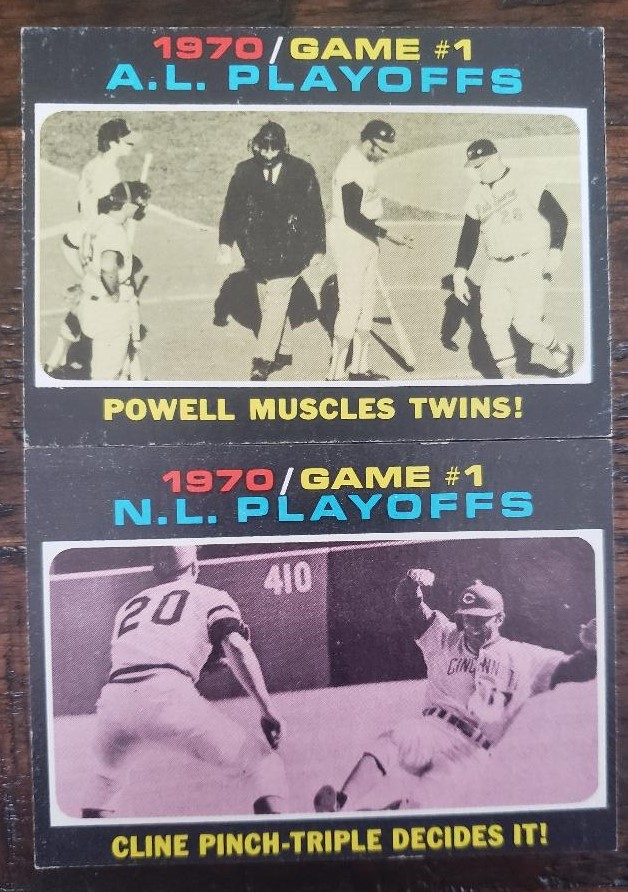 Topps stayed with that practice the following year with single cards for each LCS game. I appreciated this treatment as a kid as they were some of my favorite '71 cards. I loved the yellow filter with the AL series and the red with the NL. It pleased my synethesia although I didn't know it at the time. 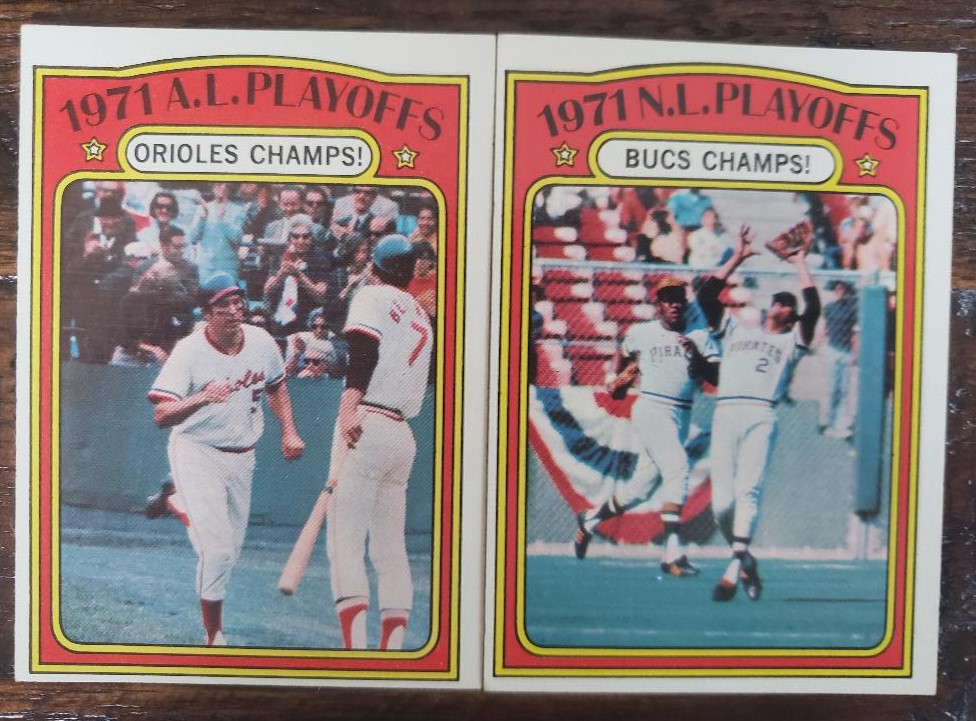 I guess the LCS stopped being "new" by 1972 as Topps confined each series to a single card. Interesting that the postseason cards were trimmed down when everything else about the '72 set was BIGGER and MORE. 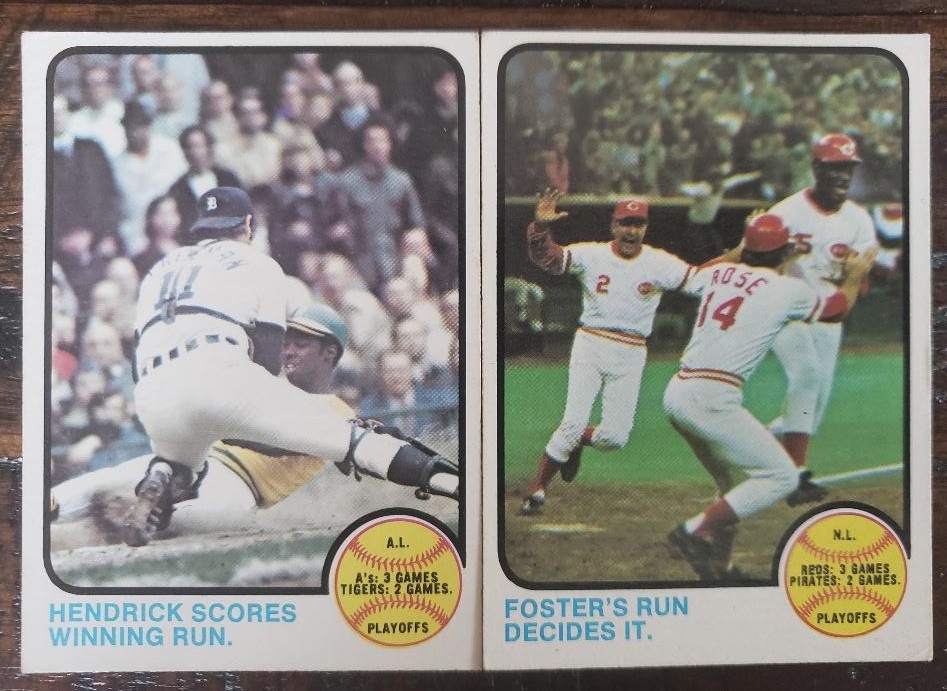 Same deal with 1973. One thing that I wished the '72 and '73 sets would have done is used a design element that distinguishes the LCS cards from the World Series cards. That's what Topps did in 1970 and 1971. 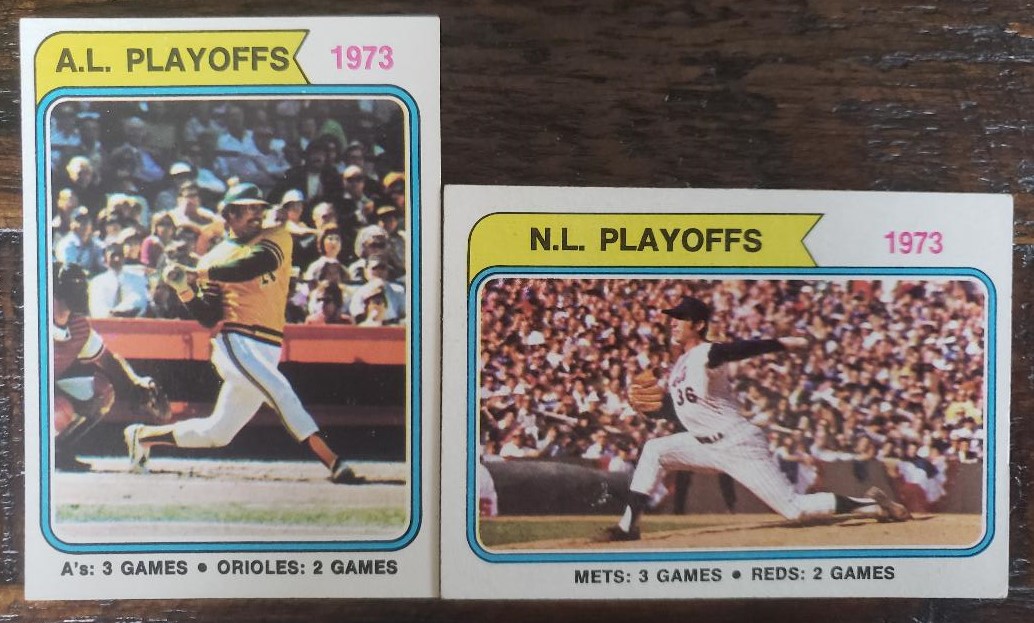 Topps stayed with the one-card per LCS model with the 1974 set but did make the LCS cards different from the World Series cards as the LCS features yellow flags while the Series cards display red-white-and-blue bunting flags. 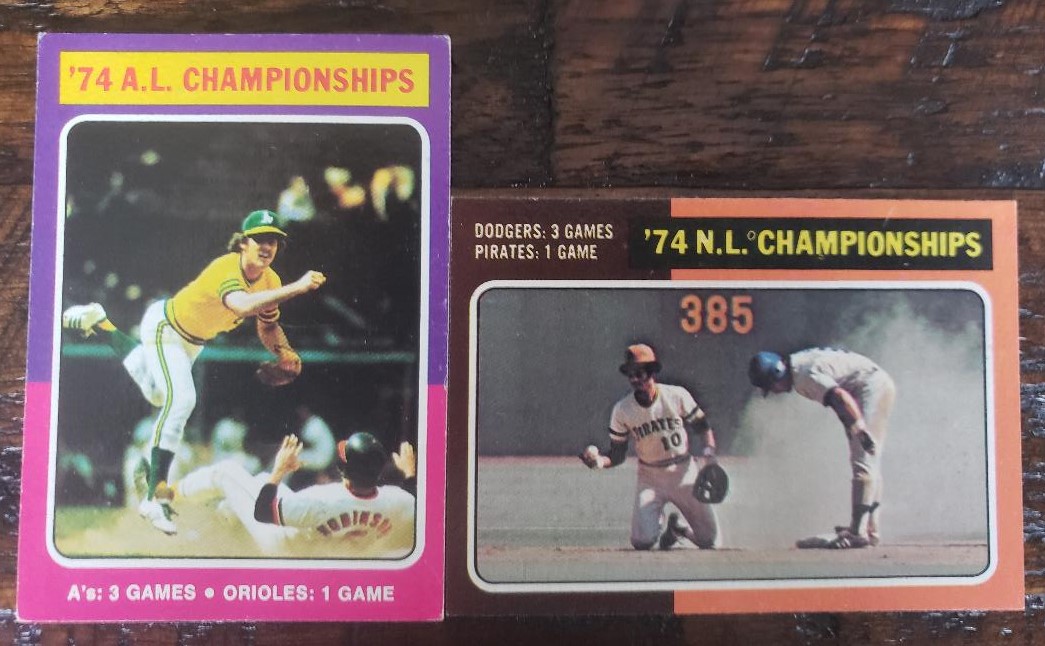 The 1975 cards -- again one-card-per-LCS -- are the first that I experienced as a collector. They're also the first to feature the Dodgers, which made the NLCS card automatically one of the most coveted for me.
The design of the LCS cards don't vary from the World Series cards. But with the fluctuating wild border colors would you really notice? 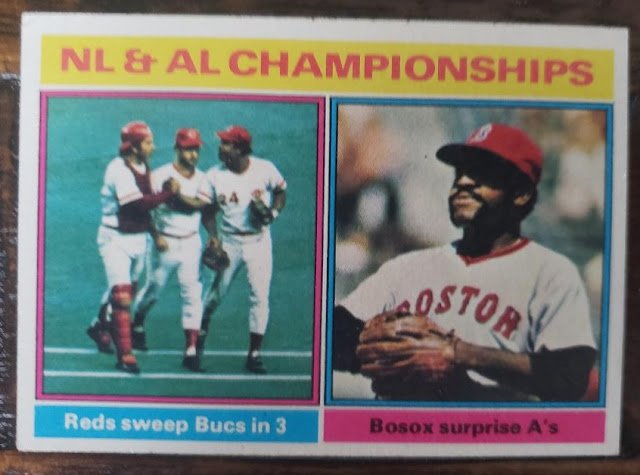 By 1976 the thrill was gone I guess. Just one card to show both League Championship Series. These are the first LCS games I remember viewing. Topps also used just one card to sum up the whole '75 World Series, too. One of the most epic World Series ever played. I would've loved to have a card for each game. 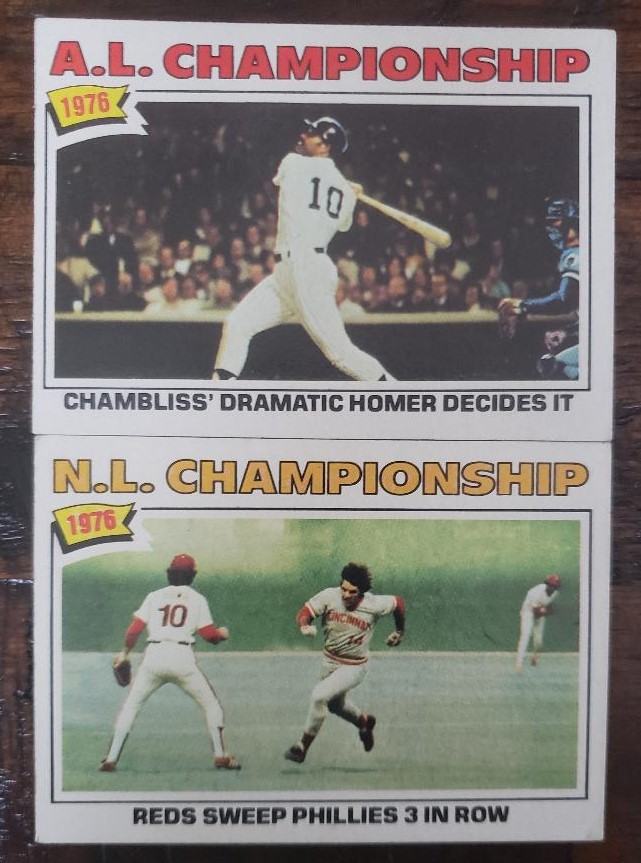 But we're talking about the LCS here! And here is where it landed in the consciousness of the general public. Chris Chambliss' home run in '76 I think converted the LCS into must-see TV, or at least more people realized this is where the action was (it certainly was more interesting than the '76 World Series -- to non-Reds fans anyway).
Topps thought enough of it that it went back to a card apiece for each LCS. 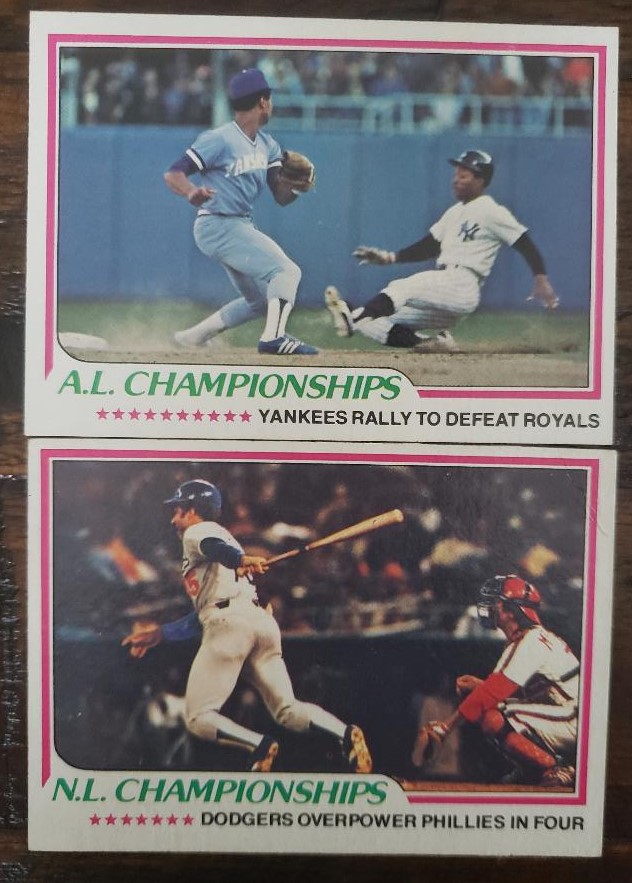 The 1978 set continued the practice of one card for each NLCS. The Dodgers were back for the 1977 NLCS and that made this card one of my favorites of the year. I want this to be Davey Lopes' single in the 9th-inning rally that scored the typing run. McCarver was the catcher for the back half of that game and it was in Philadelphia.
But even after two fairly exciting years of the LCS in '76 and '77, Topps didn't considered the next couple of LCS worth showing in its 1979 and 1980 sets. Not only that, it didn't bother with World Series cards either! 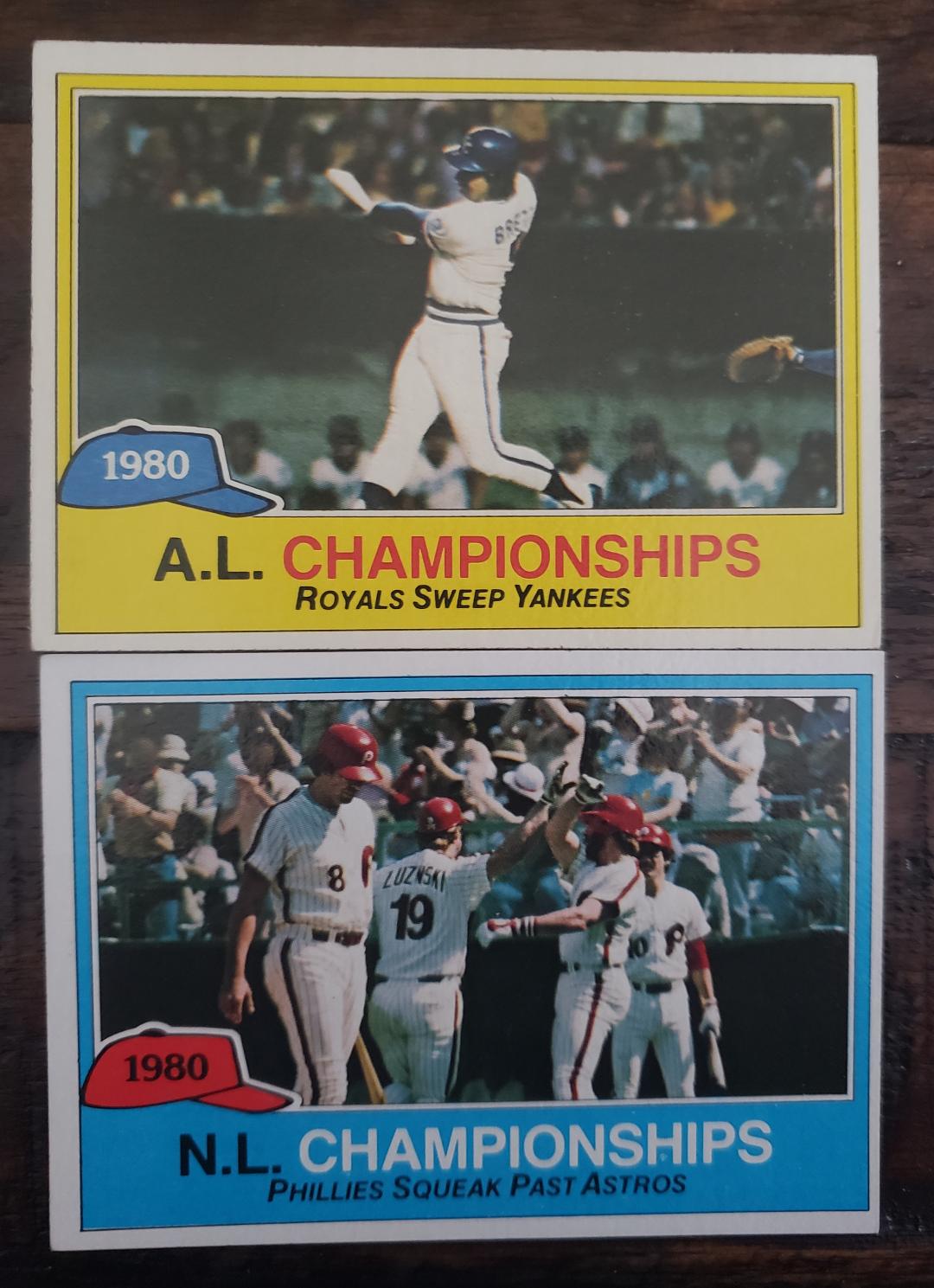 One last gasp in 1981 to recognize the 1980 postseason, and what a postseason it was. The 1980 NLCS between the Phillies and Astros was the most epic LCS I would see until 1986. Some of these LCS games are lodged in my brain much more firmly than several more recent World Series.
But that was it for Topps for 10 years. The 1980s was full of exciting playoff games, in the LCS and the World Series. Topps ignored all of it. Nothing on either of the epic 1986 LCS. Nothing on Ozzie Smith's HR in 1985 (not that I would want one of those). Nothing on the fascinating Padres-Cubs series in 1984. And just plain squat for the World Series.
Fleer stepped in and created some boxed-set cards for the late 1980s World Series. Upper Deck put World Series cards in its debut set in 1989 (grudgingly, I would add). And Score dedicated cards to the Series, too. 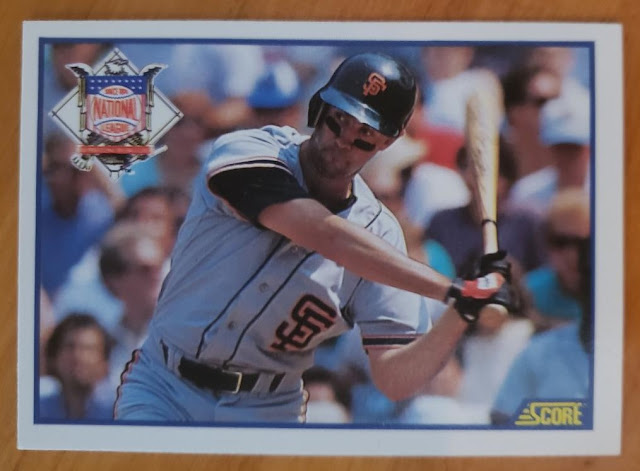 Score even returned the LCS to flagship sets in 1990 with a card of each series, Rickey Henderson for the 1989 ALCS and Will Clark for the '89 NLCS.
I admit I get hazy about the frequency of the LCS appearing in sets at this point, mostly because of the landslide of sets (the LCS could've been represented in Sportflics for all I know) and me exiting the hobby by the mid-1990s. 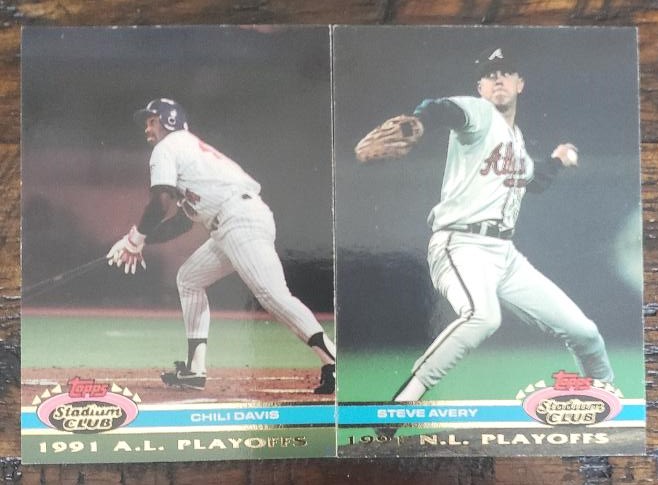 I do know that Topps returned to recognizing the LCS in its 1991 Stadium Skybox Dome sets. Not exactly displaying them in the base set, but after a decade of nothing, it was something!
The next heyday period for the LCS on cards, that I know of, is the mid-aughts of the 21st century. Topps went a bit wild during this time, including cards of the Division Series, too, and multiple cards for Division Series and Championship Series for the 2006 Update set in particular.
Some examples: 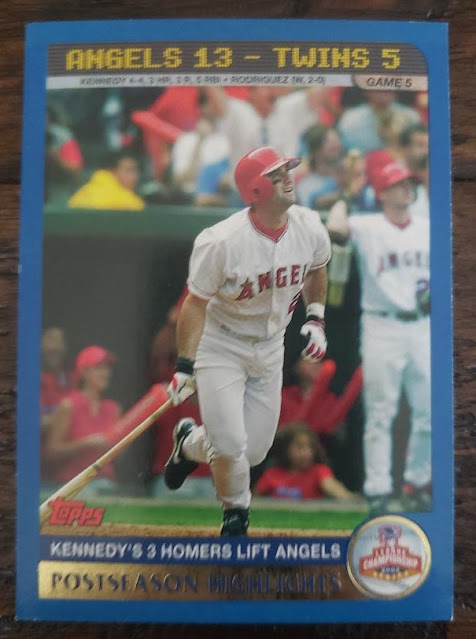 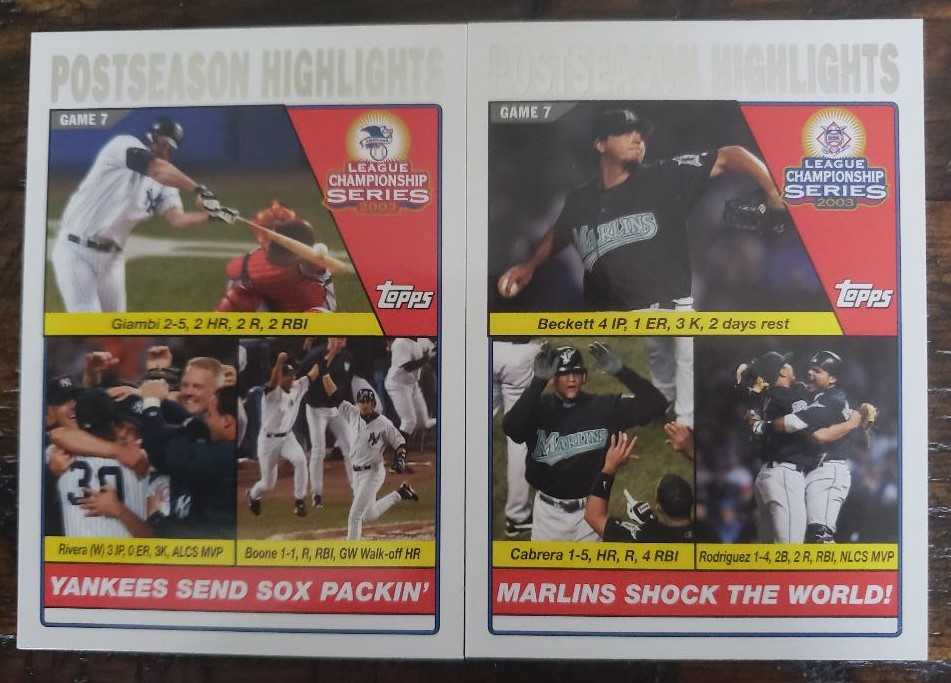 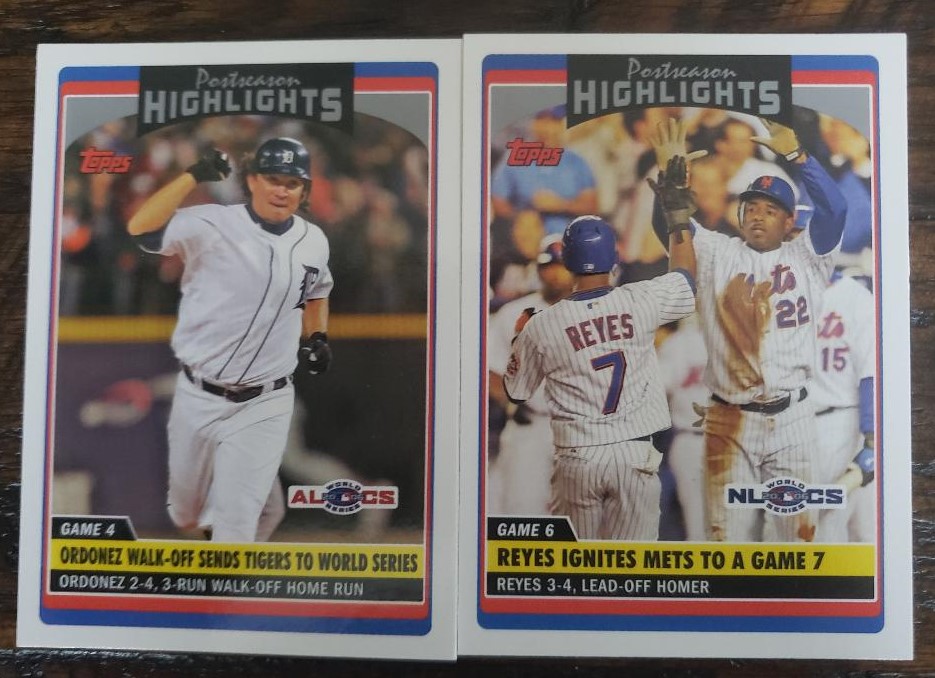 I still need to get the 2005 card(s) that recognize the Red Sox's epic 2004 LCS victory over the Yankees.
I think, after this point, Topps let Heritage do the job of bringing up the LCS. Topps still recognizes the World Series in its flagship set, but the LCS is confined to Heritage, using the model for whatever set it is replicating. 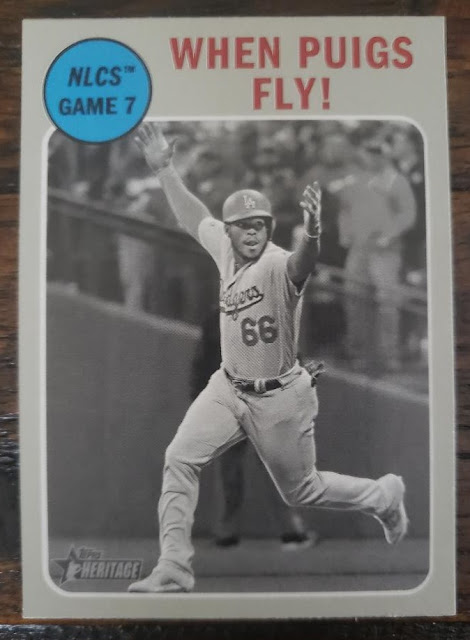 2019 Heritage dedicated individual cards for each LCS game. Well ... it had cards for each of the games won by the team that won the Series. It ignored the wins by the losing team, such as the Brewers in this case. That's pretty annoying. 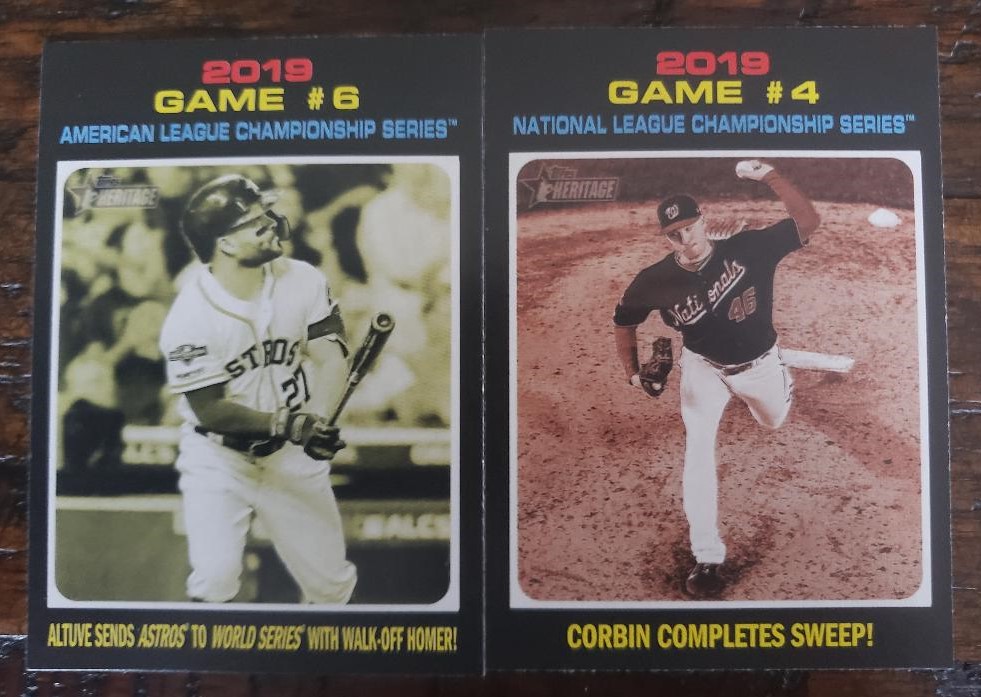 In 2020 Heritage, Topps replicated one of my favorite LCS subsets. Love the treatment and those "glow-in-the-dark" colorful letters at the top. I think there's a card for each game, too -- the Yankees wins are represented even though they ultimately lost. 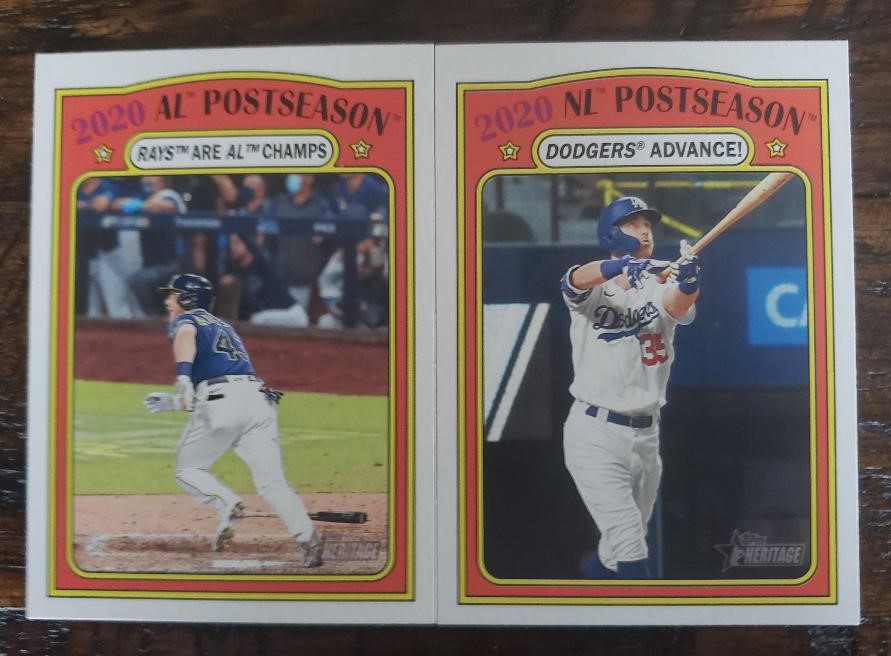 For 2021 Heritage, we are back to one card per LCS, just as the 1972 Topps set did.
I suppose we'll get the same for this year's LCS winners in next year's Heritage set, which will focus on the 1973 Topps set.
After that, who knows, there's something about Topps losing its license.
Maybe that will be the end of recognizing the LCS on cardboard. It would be a shame. Because sometimes -- a lot of the time -- that's the most interesting part of the postseason.

Old Cards said…
Nice cards and good article, but I don't like the LCS. In baseball, if we are honest with ourselves, we know that superiority is proven over the long haul. Even the worst teams beat the best teams during the season. The same thing happens in the LCS. If they get hot, receive some breaks and receive some favorable calls over the short series, the Braves with 88 wins could beat your Dodgers with 106 wins. It's just not right! The excitement of the World Series has been diminished by the LCS. Give me the teams in the AL and the NL with the best won/lost records in the World Series.
October 15, 2021 at 9:01 PM

John Bateman said…
I think it was a timing thing. As Topps tried to get cards in stores earlier they had to complete the checklist earlier. No room to wait to see who won
October 15, 2021 at 9:11 PM

Nick said…
Never realized how much the LCS was ignored in the '80s and '90s. It's a shame only the World Series seems to get the proper card airplay anymore.

Phil Abramowitz said…
The regular Topps 1982 set may not have had any LCS/World Series Cards for the Dodgers - but the Sticker set for that year did. Love the 1982 Topps Sticker set, with the foil all-stars and the post season cards.
October 16, 2021 at 3:35 PM

Bo said…
Echoing Phil's comment - we as card collectors in the 2020's forget that the trading card set was not the only, or even perhaps the primary, way that Topps recorded what was going on in baseball in the 1980s. As a kid in the '80s, the cards and stickers were collected simultaneously, and with a sticker album you had the whole season in one thin book. Those albums had a sticker for every LCS and WS game. And the record breakers, full team stats, top rookies at each position, etc. Those things were packed.