Not exactly taylor-made for baseball cards 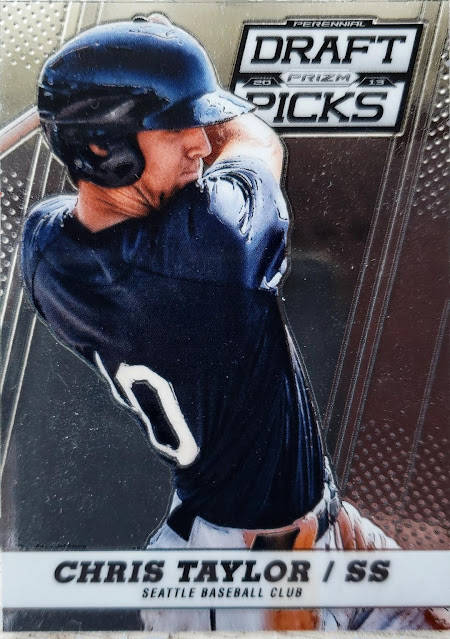 Chris Taylor last night became the 11th player to hit three home runs in an MLB postseason game and I'm pretty sure he's one of the most under-represented in terms of baseball cards.
Other players in that bad-ass Three-HR Club include Babe Ruth, Albert Pujols, Adrian Beltre, Reggie Jackson, George Brett and Jose Altuve.
Taylor probably has more cards than Bob Robertson and maybe Adam Kennedy, who are also members of the club. But I bet Enrique Hernandez and Pablo Sandoval boast more cards than Taylor, whose cause I have supported for years now -- you can find posts of me whining (because that's what I do) about Topps' inability to create cards of Taylor during his breakout 2017 season.
After missing Taylor's first home run, I was able to get away from work last night to see his last two live. It was something else. I didn't record this game (I was fairly certain the Dodgers would lose), but I still have Hernandez's three-HR game in the 2017 NLCS in Wrigley Field saved for viewing whenever I want.
Taylor, no doubt, will get a boost in cards now. Topps will probably create more cards of him in 2022 than they ever have. And card sellers have already boosted their prices on his cards. Not having any idea whether Taylor had an autograph card (I assumed he did), I looked quickly on COMC and found this. Yeah, I'm pretty sure no autographed card of Taylor was going for triple digits on Wednesday.
But as of 2021, Taylor's cards are in relatively short supply in comparison. It fits with his status as a utility player who does everything well and his humble nature ("I don't look good doing anything," he said after his three homer performance).
I have 46 cards of Taylor, which amazes me a little. If a player gets to 60 cards in my collection it means they've reached the higher echelon. Taylor isn't far off for having practically none five years ago.
My earliest cards of him are the 2013 Prizm card you saw at the top and this other Panini Mariners card. 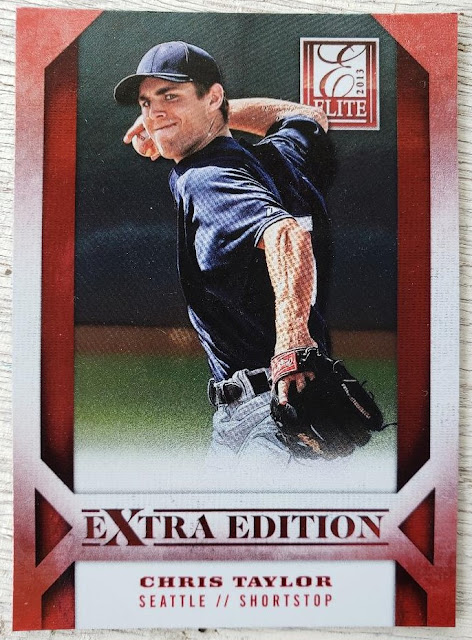 Looks weird without any facial hair.
His first Topps flagship card arrives in the 2015 set. His Topps rookie card is in 2014 Update and it's one of only a smattering of rookie cards that he has. 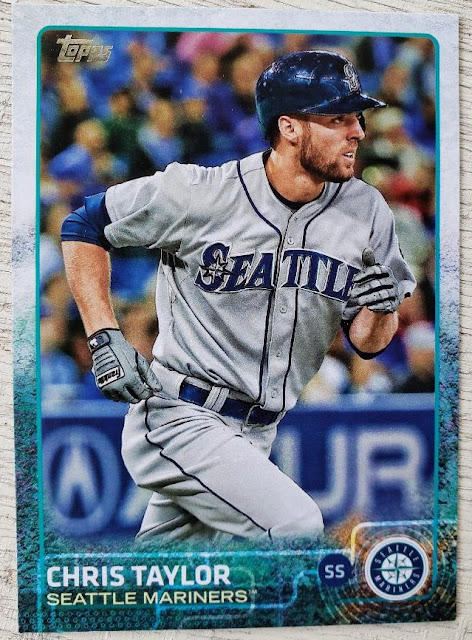 But after this 2015 card, good luck finding him in anything from 2016, which was a transition year for him, the year the Dodgers picked him for a steal. It's a running joke on Twitter to mention the transaction between the Dodgers and Mariners, in which L.A. sent pitcher Zach Lee to Seattle for Taylor, any time Taylor does anything grand, which often happens in the postseason. 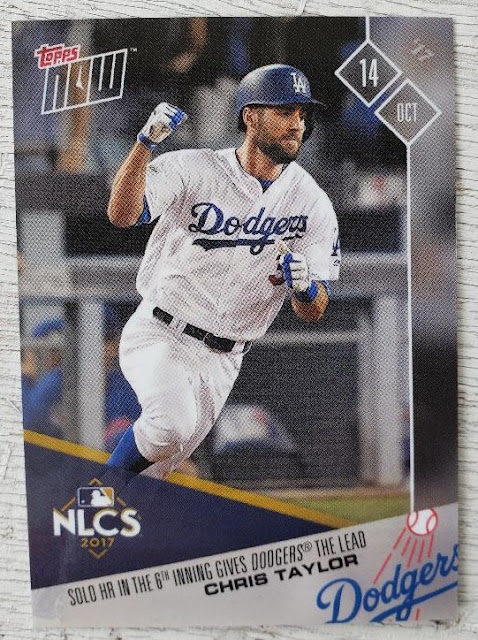 One of the first Dodgers cards of Taylor I have was issued after Taylor's key home run against the Cubs in Game 1 of the 2017 NLCS.
But pickings were slim for cards of him in 2017. Topps, like many others, was slow to realize his value. I assume Topps looks at the same scouting reports as everyone else does and then buries collectors in those prospects in Bowman products. But there are always players who slip through the cracks. Thank goodness they do. 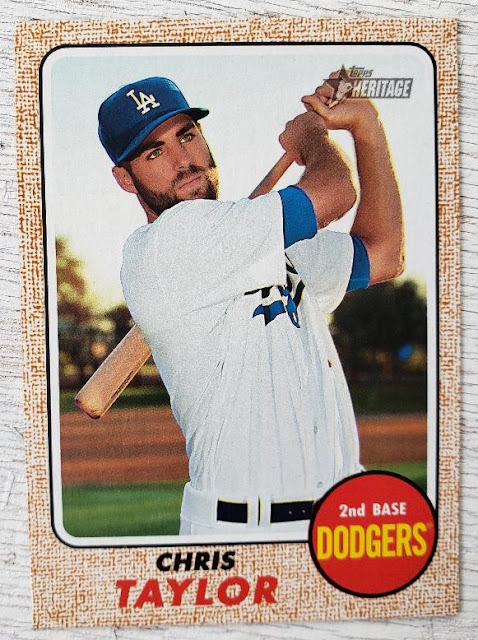 Taylor's first Dodgers appearance in a store-shelf product showed up in Heritage High Numbers in 2017. And then in typical "reactive-instead-of-proactive" form, Topps filled its 2018 sets with Chris Taylor cards. 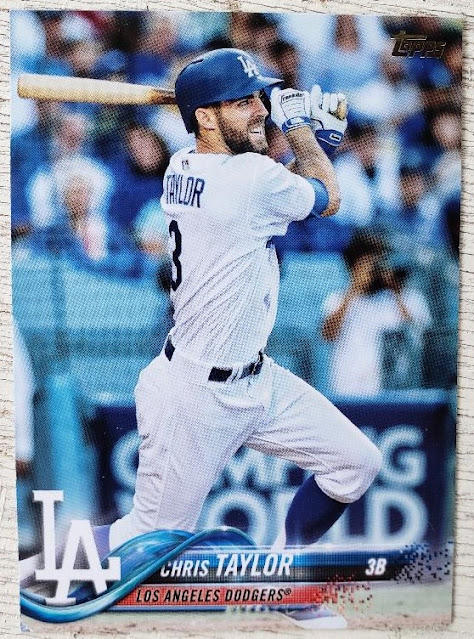 This 2018 card is Taylor's first Topps flagship card since 2015. And Taylor would show up in many of Topps' other sets that year, too, after basically being ignored all the previous years. 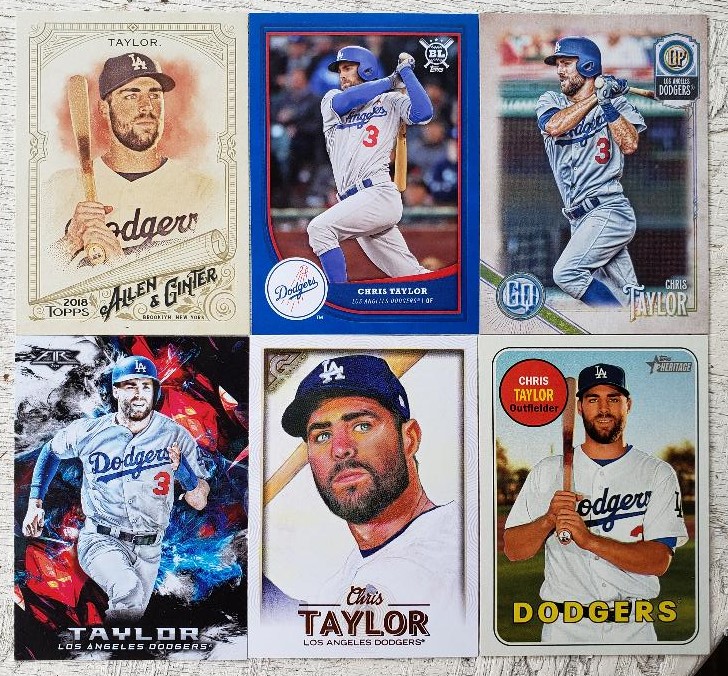 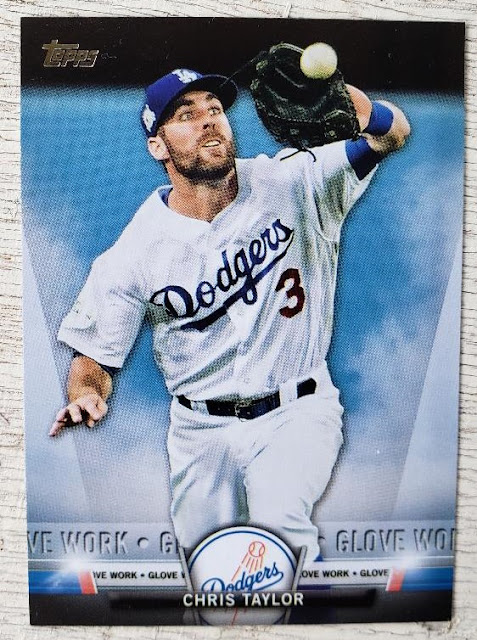 Heck, Taylor even showed up in an insert or two. People were realizing. Topps was realizing. (As noted last night, Taylor wears the same number that Ruth did).
In one of the best tributes to Taylor in 2018, the Dodgers' stadium giveaway that year included Taylor as one of the six Dodgers players the set featured through every design issued. 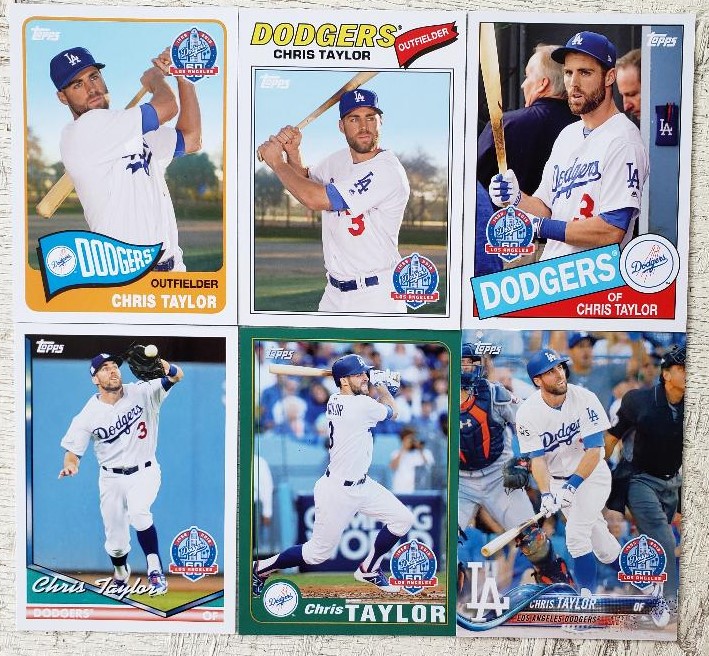 Taylor was included along with more-often displayed players like Corey Seager, Justin Turner and Kenley Jansen. It was pretty much a surprise (especially since Kershaw was one of the current players left out).
Note that two of the giveaway cards reused photos from Taylor's 2018 flagship card and the insert. Guess Topps hadn't exactly stockpiled images of Taylor.
So, he had finally arrived, right? Taylor had found his place with Topps and that was that.
But it wasn't. Taylor did stay in Topps flagship products. And he's there in Heritage, too. 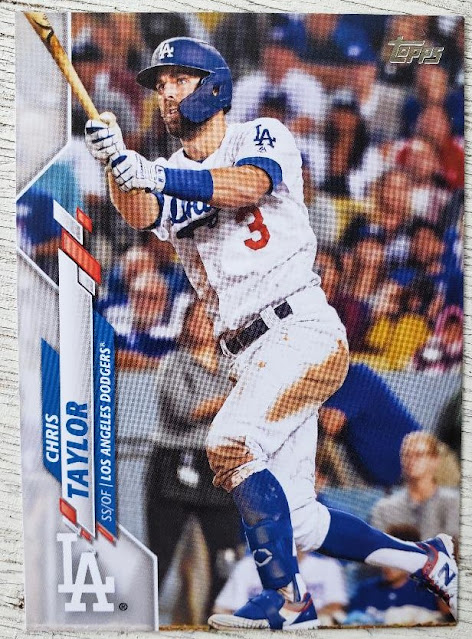 I think his 2020 flagship card is one of the better ones as far as that confining design (weird effect from my phone as it makes it appear as if he was shot from behind a batting screen).
But he disappeared just as quickly as he arrived from sets like Allen & Ginter and Gypsy Queen. And forget about those high-end sets.
I think this practice from the last 20-30 years of focusing on mostly stars and rookies is out of whack in baseball more than any other sport that's collected. It's clear that baseball relies on players like Taylor more than ever -- heck, look at the pitching weirdness that's going on, will all those relievers get cards next year? It's obvious that current baseball depends on those non-rookies and stars.
Anyway, my guess is Taylor doesn't mind that he's not the focus of attention. It was weird as heck last night when everyone was focused on him, of all people, to see if he would hit his fourth home run.
I do have a few favorite Taylor cards in my collection. They aren't much, because Taylor is Taylor and I am the collector that I am. 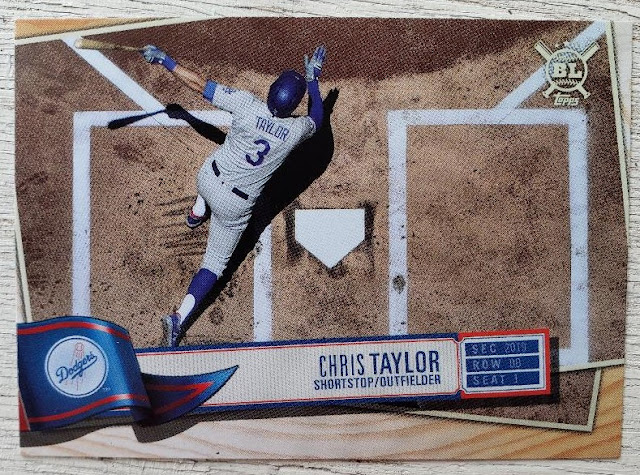 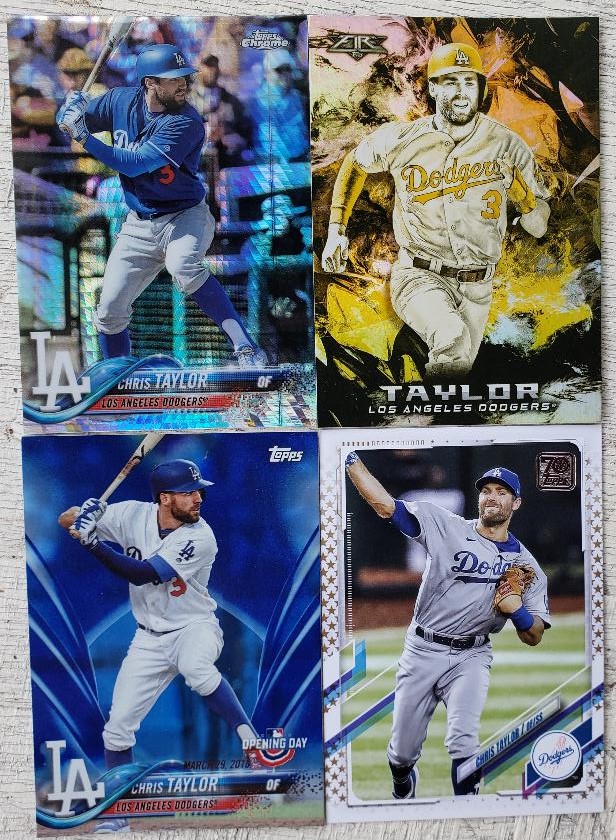 Some parallels that I've accumulated (The one on the bottom right I just received from a Braves fan, who probably likes Taylor as much right now as as I like Eddie Rosario). 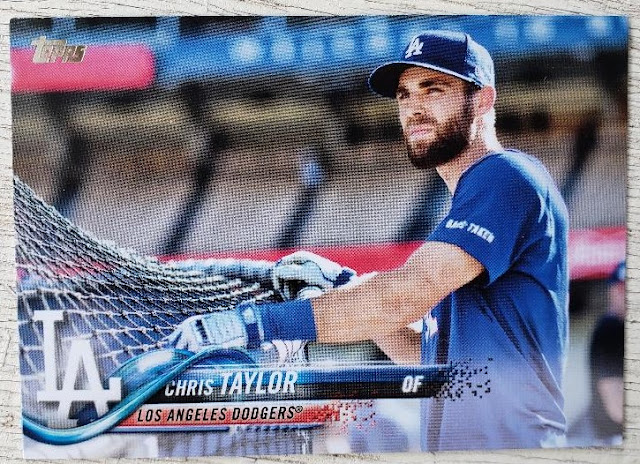 A 2018 SP that arrived cheaply because Chris Taylor. 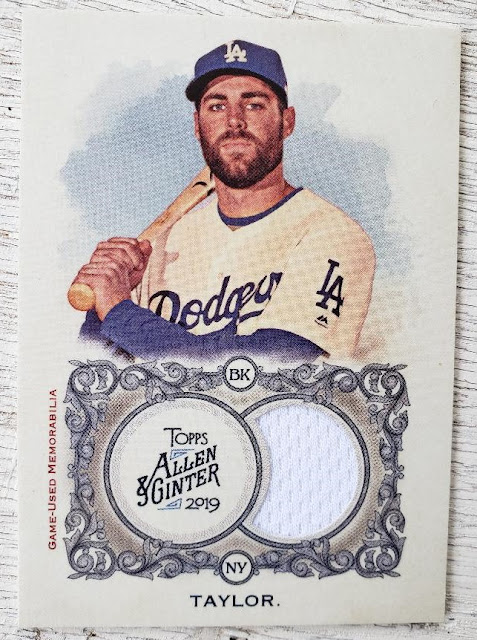 That's the only hit that I have of him, from 2019 A&G. I really need to get an autograph card of him, but obviously now is not the time. 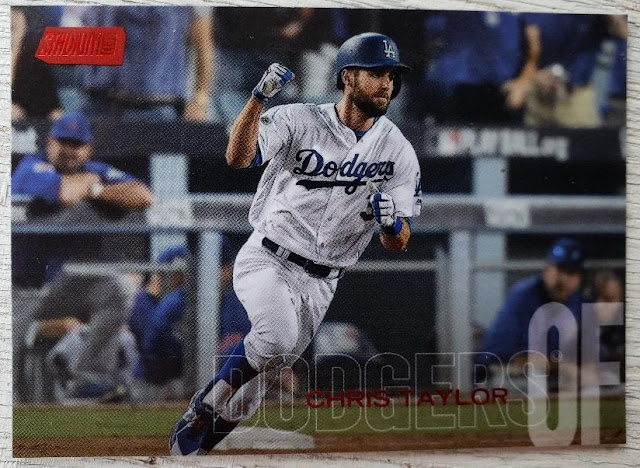 Last night was quite the rush, watching it on the big screen. I've been lucky enough to see my team do the three-HR thing in the postseason twice in the last four years.
I probably saw Altuve, Sandoval, Pujols and Beltre do it as well, but I don't care about those teams enough to remember what that was like. The George Brett 3-HR game was likely a big deal back when I was 13. And the less said about Reggie's performance the better, just to balance all of the talking about it I've heard over the years.
It's nice to see a Chris Taylor get some of the accolades (and now another Topps Now card) instead of someone like a Reggie Jackson.
Chris Taylor is a free agent after the season ends. There is a good possibility he goes elsewhere to find a permanent position with another team, especially since his stock has risen even more in the postseason. I imagine the Dodgers will try to keep him but only half-heartedly as they tend to have a stash of play-anywhere players.
If he exits, I guess I won't care whether he appears on any more products like I've cared the last four-plus years.
He will definitely get his due in 2022.
After the fact, of course.

Brett Alan said…
The George Brett 3-home run game was definitely a magical moment for me.

Look at it this way: when Babe Ruth hit his 3 home runs, there were probably a little over 100 cards of him in existence, based on a quick scan through TCDB. The same site say that Taylor has 787 cards. Of course, many of those are just parallels of the same thing--parallels of course didn't really exist when Ruth played (or much later than that), although there are a few cases where there are different-colored versions of his cards or something like that, so effectively they were parallels although it's doubtful anyone at the time cared.
October 22, 2021 at 8:56 PM

Nick Vossbrink said…
Is amazing to me how important these guys are to the modern game and how their versatility seems to be held against them by both the teams and Topps. Is he a "star"? Absolutely not. But guys like him and Kiké are kind of the glue that holds a team together yet teams will just let them go and take a chance on the next versatile shortstop that comes up from the minors.

I honestly hope the GIants take a shot at him this off season (especially if they can't resign Bryant) since he's totally the kind of player who'd fit in Kapler's rotation system.
October 23, 2021 at 12:51 PM

Matt said…
Go Wahoos! I think with that 3-HR game he has officially surpassed Ryan Zimmerman as the best University of Virginia alum to make the Majors.
October 25, 2021 at 10:10 AM