December 04, 2018
Against my better judgment I am entering Baseball Every Night's "Ugly Sweater/Ugly Baseball Card" contest.

It's not that I'm afraid of branding a baseball card ugly. I've done that many times on this blog. I even dedicated an entire post to what I thought were the ugliest baseball card sets at the time (Peter will happy to know that 1995 Fleer wound up first).

It's just that "ugly" comes in many forms. How do I decide which ugly?

I figured I'd let the dictionary help me arrive at a conclusion. As you know, a dictionary is incapable of settling on one definition of a word. It has to give you several options. By this means, I can address several different kinds of ugly before making a decision and delivering the final, devastating Ugliest blow.

For my dictionary of choice, I chose my red-covered, hard-bound Webster's ninth collegiate edition dictionary, published in 1983. This is your average, hefty, all-you-could-ever-need dictionary that was prevalent on every desk shelf before the internet thought it could explain words better but instead you're left with several confusing options and definitions, half of which you suspect have been arrived at by 30-somethings nostalgic for the days of Limp Bizkit's "Nookie" violating everyone's ear space.

No, this is better:

I'll go with each definition and try to find an appropriately ugly card. 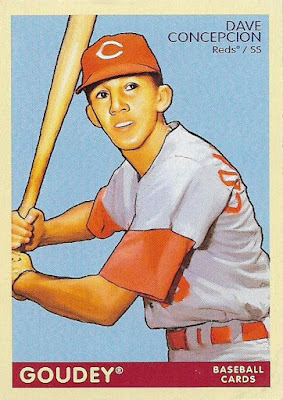 In 2009, Upper Deck's Goudey set, which had been a perfectly fine representation of the popular '30s cards, underwent a soul-extraction. That's the only way I can explain the cards. There is no better example of that phenomenon than the soul-less and downright creepy (and, yes, frightful) Dave Concepcion card. I don't even want to look at his eyes for too long. There is nothing in them. The card has freaked me out for years and it is ugly.

2. a) Offensive to the sight: hideous; b) offensive or unpleasing to any sense 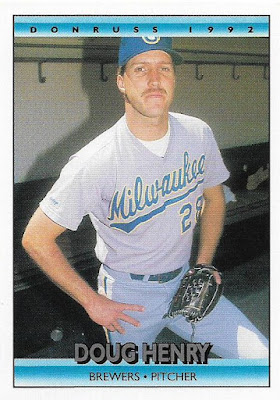 There is just one set that causes me to react in a way that is remotely similar to encountering maggots at the bottom of a garbage can and that is 1992 Donruss. I really can't explain why I feel that way. I tried to in a post a few years ago, but I have a feeling it's deeply personal and even may not be able to be explained with a trip to the psychiatrist. Just know that I definitely find it hideous and unpleasant to all my senses. 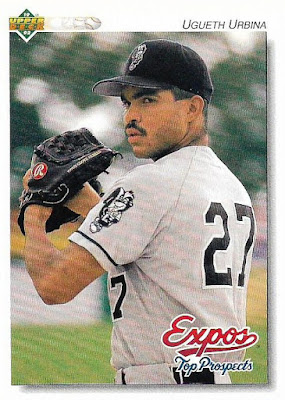 It's difficult for me to find baseball cards morally offensive or objectionable. I suppose there are some cards where the person on them causes me concern that I own their cards. O.J. Simpson for one. Here is another. Ugueth Urbina served seven years in prison for attempted murder. That's ugly. I have just one or two of his cards. Not thrilled about it.

4. a) Likely to cause inconvenience or discomfort (the "ugly" truth) 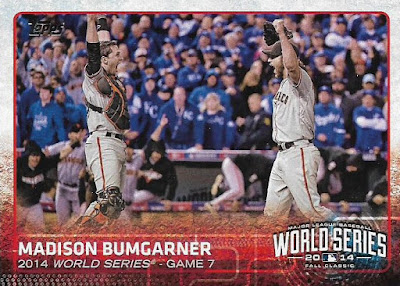 I loathe this card for its discomforting ugliness. Not only is it the Giants celebrating a third World Series title, closing off one of the darkest eras of baseball history, but they are doing so in front of a mass of hopeful Royals fans. The K.C. fan base is one, for me, that can do virtually no harm. They are cuddly poochie dogs. (Those who might not think so are probably fans of the Cardinals or Yankees, and they don't count for obvious reasons). This is inordinately sad and almost cruel. It's one of the ugliest moments I can find on a baseball card. 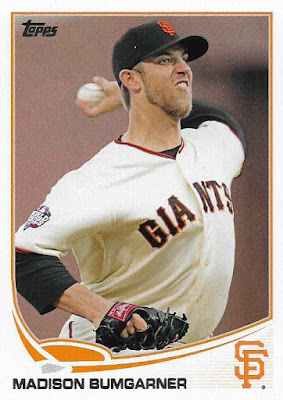 
So, this is where my dictionary's ugly definitions run out. But I still have some more ugly cards as I travel toward the ugliest. 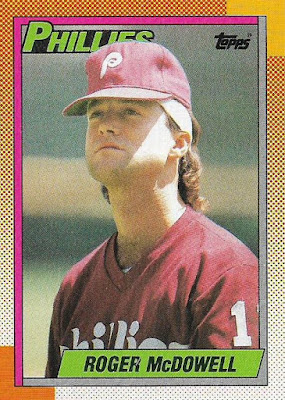 1990 Topps is a popular choice among the Ugliest Sets. I can't argue with a card like this, in which lime green clashes with burnt orange clashes with magenta clashes with Roger McDowell's goofiness. But I've come around on 1990 Topps a lot, especially since its connection to artist Roy Lichtenstein and comic books in general was made. 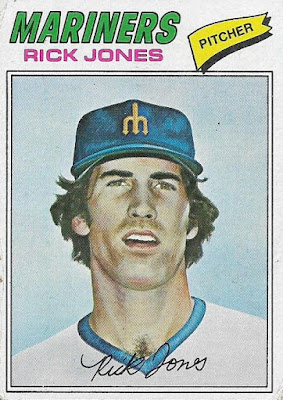 In terms of an ugly card creation, it doesn't get much worse than 1977 Topps' Rick Jones. This re-creation of what was surely a black-and-white picture in a publication is one of the weirdest, strangest happenings in all of 1970s card lore. I happen to think it's so ugly and bizarre that it's wonderful, so I would never seriously enter it under an Ugly category. 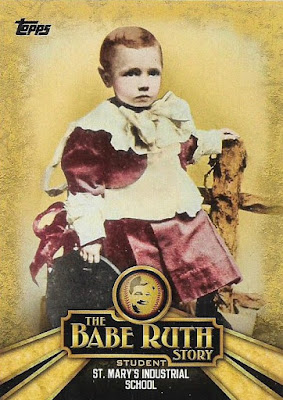 Another entry under ugly's first definition: "frightful." This card doesn't seem so alarming looking at it under the light of day. But if I woke up out of a deep sleep, so deep that I didn't know what day it was or even where I was. and this card blown up poster-size and hanging on the wall was the first thing I saw? Well, that would be so dire I would probably have a heart attack on the spot.

This card is probably the most appropriate lead-in to my official entry in the Ugly Sweater Card Contest, what I find the ugliest card in all of my collection: 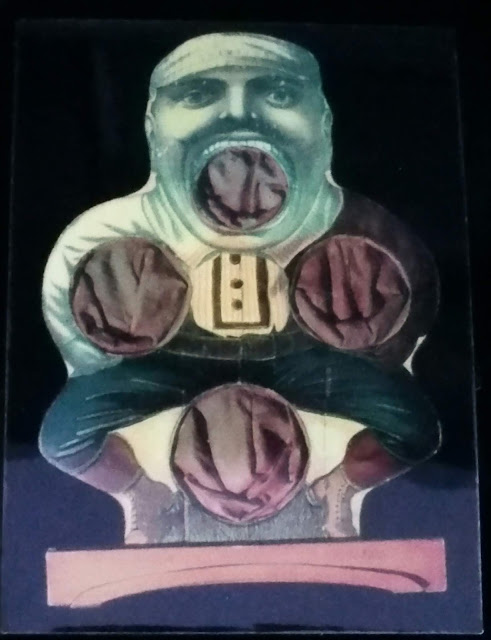 This very definition of the word "grotesque" is card No. 14 from the 1995 Comic Images Phil Rizzuto's Baseball: National Pastimes set (that's a mouthful). It features a number of baseball-related pictures from long ago, including this bean-bag game from the 1880s that probably scared the crap out of any kid who was handed a bag and asked to throw it at the beast. Just horrifying.

The card is also chromed-up which makes it look even more scary. I sure do feel sorry for children in the 1880s.

So, that's a look at some frightful, hideous, offensive, discomforting cards.

And, for what it's worth, that Limp Bizkit song is ugly, too.

Peter K Steinberg said…
I felt and still feel really uncomfortable looking at that last card, Greg. It's perfect for the competition, and I really enjoyed all the lead-ins and that you used a physical book. Bravo.
December 4, 2018 at 8:33 PM

Community Gum said…
Honestly the most disturbing part of that card is the sack in between his legs. There has to be some bar in some town that has taken inspiration from that "thing" in their bathroom.
December 4, 2018 at 10:40 PM

BaseSetCalling said…
Bumgarner sure seemed to have a lot of ill-timed / poorly chosen "Pitcher Face" cards from Topps over the years, starting with his very first baseball card. In 2018, he opted completely out of allowing Topps to issue new baseball cards with his picture on them.
December 5, 2018 at 12:20 AM

Chris said…
That bean bag card is horrifying. Why on Earth would they show us that?

Repulsive players have been on my mind lately, due to some recent (and ill-timed) purchases I've got a blog post on this subject warming up, but I need the cards in-had first-and I've posted enough recently anyway.

Also, BSC's comment has me wondering if MadBum got mad at Topps for the bad pitcher poses and opted out of his Topps deal because the photos didn't meet his standards?
December 5, 2018 at 7:58 AM

Fuji said…
Dang. That Concepcion and his beady black eyes are freaky. But the bean bag game card definitely takes the cake.
December 5, 2018 at 8:53 AM

Doc Samson said…
I vividly remember when '92 Donruss came out. Tons of hype because "Donruss was back!" Especially considering the abominations of the previous two years. Never before have so many card collectors (including myself) been so duped. Looking at that set with that freezer-blue stripe and all it's poorly cropped photos will give you a migraine. Oh well, at least '92 Leaf Black Gold is still a classic.
December 5, 2018 at 10:22 AM

AdamE said…
You blast Limp Bizkit for it's use of the slang word Nookie then you throw in Poochie? Surly nookie makes it into Webster's before Poochie does.
December 5, 2018 at 4:28 PM

AdamE said…
Sorry, I was going for snarky yet funny.

More importantly I actually wrote a blog post today instead of hijacking one of your comments again.
December 6, 2018 at 12:35 PM

Ana Lu said…
First of all: AHAHAHAHAHAHAHAHAH
Ok..moving on =D
What a great idea! Think I'll give it a try when I get some vacations on Christmas.

I have that Concepcion card and it really is a sight..frightening sight.
I like Bumgarner so I like that card. But I also dislike it for the motive you mentioned because in that year I was playing on the playoffs fantasy and got ALL the results right until the last one..the one where Royals lost to Giants =(
As I said I like Bumgarner. Even the beaver cards. I also have that one.
I also have the 995 Comic Images Phil Rizzuto's Baseball: National Pastimes set (which I quite love) but you are right again..that special card is quite the weird bloody-effin-hell-is-going-on-here-? card
December 10, 2018 at 8:39 AM