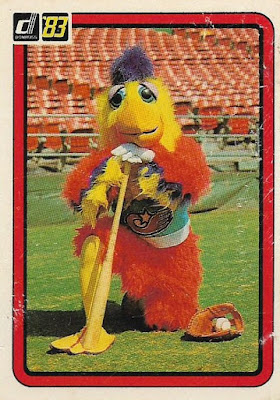 It took me awhile to pick up on the signals that I need to pull back on trying to accumulate every Dodgers card in existence.

The signals were there. They were in every complaint about variations. Every squawk about short-printed base cards. Every lament about the growing number of parallels. Every screed about online-only sets. Each one of these modern-card features made team-collecting infinitely more difficult than it was 20, 30, 40 years ago.

But something else told me to let go, too.

When I get packages now, often the cards that interest me most are not the Dodgers cards. They are usually either set needs or maybe a non-sports card or -- and this is especially true -- a card of The Chicken.

This exquisitely scuffed-up sample of The Chicken's card in 1983 Donruss arrived in a PWE from Matt of Sports Card Collectors. Every other card in the PWE was a Dodgers card. I threw those Dodgers card down on the floor in disgust, spat on them and looked lovingly at my chicken card.

OK, no, I didn't do that to the poor Dodgers cards. I only do that for Giants and Marlins cards. But the card of The Chicken was the only one that came with heavenly sound effects as I pulled it out of the envelope. That's what tells me where my collecting heart lies -- in cards from the '70s and '80s and earlier. This is what I must collect. Modern Dodgers cards, quite frankly, are getting in the way. There's only so much money to go around.

This Chicken card speaks to me as only a card issued during my teens can. I can spell "Ted Giannoulas" without looking it up. This is where mascots begin and end, sorry, Opening Day insert set. 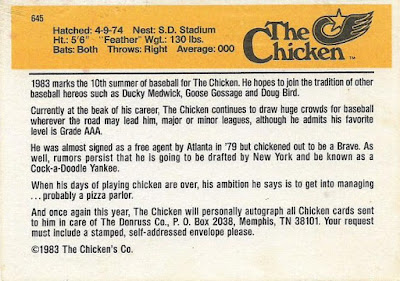 The 1983 Donruss Chicken card is the middle card in a trilogy of Chicken cards issued in the 1982, 1983 and 1984 Donruss sets. I now own the latter two Chicken cards and I will complete that trio.

For me, Donruss including The Chicken in its base set was the first indication that Donruss was worthy of collecting. I considered Donruss a lightweight when it first came out in 1981, with its paper-thin cardboard and its abundant mistakes. It was clearly inferior to Topps and Fleer.

The '82 set didn't do much to shake me from that opinion but when I found out The Chicken mascot was included in the set, I was impressed. For the first time, I desired a Donruss card. I guarantee that card will show up in the 100 Greatest '80s Cards when I conduct that countdown.

The writeup on the back of the '83 card is tremendous and filled with painful word play. Send in those autograph requests!

This likely will not make me want to collect the 1983 Donruss set. But I do see it as more of a possibility than getting every Dodger card ever made.

By the way, here are those Dodger cards SCC sent: 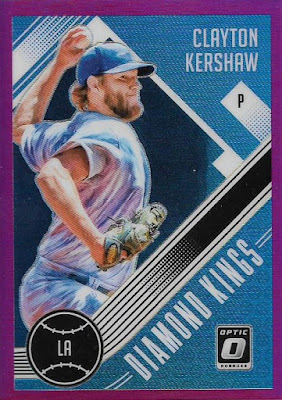 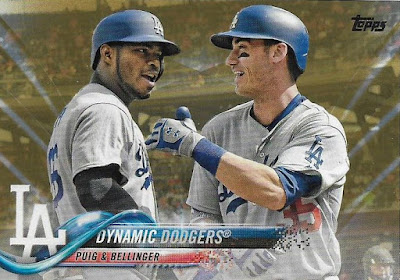 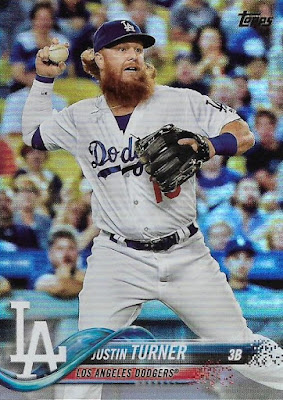 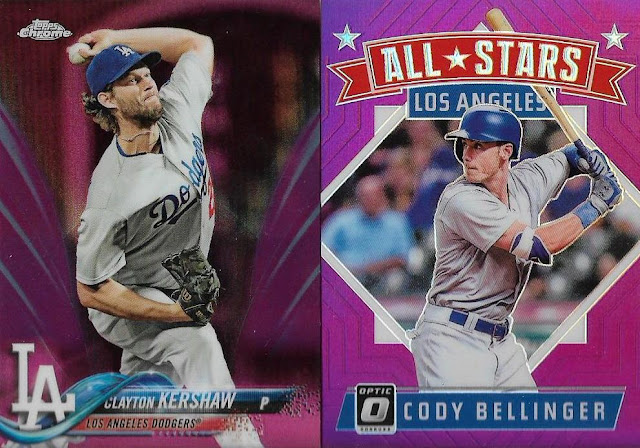 And a couple of pink parallels that I own already but will go to some other happy collector.

I do still enjoy getting Dodger cards I don't have. But the fact that I wrote much more about a regular base card than a bunch of more exclusive parallels is another signal.

A dude in a bird costume is a sign.

Focus on what really makes you happy in this hobby.

This is hopefully the last of the 10th Anniversary Giveaway Updates.

I have now sent out every giveaway prize except for two -- well, except for one, but the post office is going to make me work a little more for one of them.

The PWE I sent to mr haverkamp came back to me with a "postage due" label. This is odd because I sent several other cards of the exact same number and weight in the exact same type PWE and those arrived with their recipients. Some sort of weird northern California regulation I'm assuming.

The other card I haven't sent out is for Jeff at Cardboard Catastrophes. That is because I'm vainly trying to include some other cards to account for the goodies he has sent me lately.

Hopefully those will all be out by the end of the week and they won't get lost amid all the Christmas packages.

Mark Hoyle said…
I just got that Chicken card for the 84 Donruss Set. Grabbed complete set yesterday at show for 30 bucks
December 17, 2018 at 7:44 PM

Nick Vossbrink said…
Focus on what makes you happy is good advice for all hobbies. Is funny. I somehow had the 1982 Chicken card in my collection—which means I might've pulled it in my one pack of 82 Donruss that I bought way back when. I was in a break last month and got randomed the Padres and when my stack came I found a 2016 Donruss Chicken card in the stack. Was it my favorite card from the break? No. But I did get a goofy smile when I saw it.
December 17, 2018 at 8:08 PM

Billy Kingsley said…
Any day you can add a six foot tall chicken to your collection is a good day.
December 17, 2018 at 8:18 PM

bbcardz said…
I do love that Chicken card. I even sent it in to get autographed by the Chicken back in '83. It came back with his trademark beautiful signature, too. I also saw him at an event a few years ago and he still signs the same way.
December 17, 2018 at 8:27 PM

Johnnys Trading Spot said…
I have yet to complete a "modern day" year of Braves. It is impossible for sure. I'm not even sure if I've completed a vintage year of Braves either. It is tough. I still want them all, but know it will never happen.
December 17, 2018 at 10:32 PM

Matt said…
I will have to make sure next time I send some oddball stuff then :) I bet I was the one who sent you the pink parallels of those already now that I think about it lol. This is what it does to me around this time of year haha
December 18, 2018 at 6:23 AM

carlsonjok said…
Dude, this idea you have about reciprocity is all backwards. You don't need to send anything. I get immense pleasure from reading your blog (the combination of good writing and a topic I'm emotionally invested in is all too rare) and anything I send is my way of expressing appreciation for what you do here.
December 19, 2018 at 7:36 PM