My irrational hatred for a completely innocent baseball card set 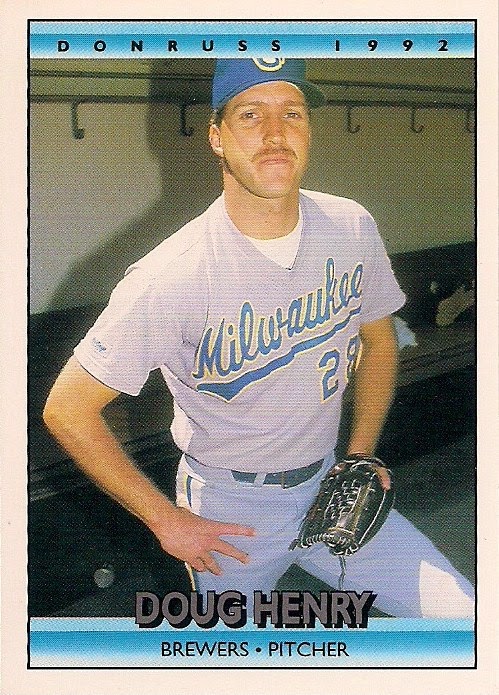 Sometimes I think I need a psychiatrist.

Well, not about the usual stuff. But sometimes I think I need a psychiatrist when it comes to baseball cards.

Yep, I'm doing one of those introspective posts in which some readers are going to want to shake me and say "get off it, man! Like what you want to like, hate what you want to hate! It's a hobby!" But introspection has served me well these 40-plus years. It's what I know and how I deal.

I've mentioned this before on various posts, and people probably laugh it off when they read it. "Hatred for a card set! Ha, ha! That Night Owl! Ho, ho!"

I'm not joking. I wish the set was dead.

I HATE it. Spit on your grave hate. Curse your children's children and their children's children hate. The kind of wild, absurd hatred that you see on Twitter every day. Only more wild. And more absurd. If I could, and had almost no sanity left, I would nail each '92 Donruss card to a different tree with an accompanying note for each that said, "NEVER DO THIS AGAIN!"

Given my feelings, it's shocking that I own any '92 Donruss cards. I should have burned them in the fireplace and buried the ashes by now. The only reason that I haven't disposed of them is that I know that how I feel is completely bizarre and nonsensical. This is an innocent baseball card set! It's done nothing wrong.

But, seeing those cards in a box in my house? Oh, yes they have done wrong by BEING IN MY HOUSE. How I wish they never existed.

Those who were young in the early '90s probably will offer the Elite Series cards as proof that '92 Donruss is worth having and existing. Amusing children. By 1992, I had operated on the "base card is king" formula for more than 15 years. Inserts meant nothing to me then and I'm pretty sure I wasn't even aware that the Elite cards existed.

No, all I knew was that sickly-looking design on the base cards. It made me want to throw up.

But I will hold back the urge to hurl and look at a '92 Donruss card to see if I can make sense of this after all these years. 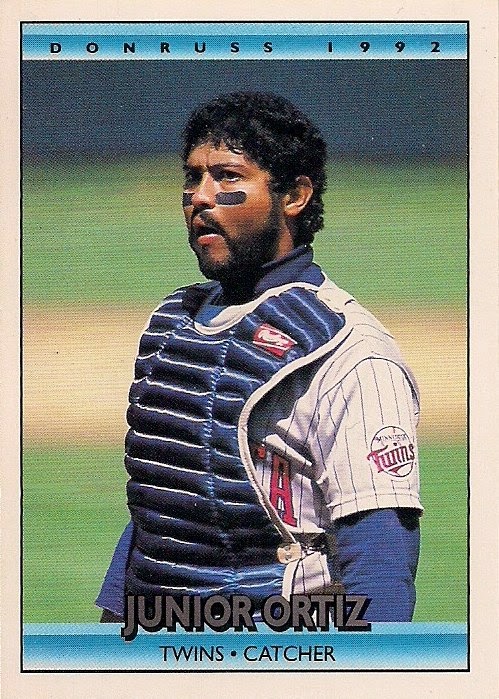 OK, there it is. I can barely stand it, but I'm doing OK. I'm working on some feelings here.

Scanned, the card doesn't look all that bad. On a scanned card, photos tend to drown out design (unless the design is particularly loud). So I notice the picture more than the card as a whole here.

I know that, in person, looking at the card, the problem that I have with '92 Donruss is the light blue stripes at the top and bottom of the card. There is something about it that makes me nauseous.

This is what puzzles me though. Normally, I like light blue -- what is often called baby blue or powdered blue. I like it a lot.

The blue road uniforms of the late '70s and early '80s hold a nostalgic pull. I was a Houston Oilers fan as a kid because of Luv Ya Blue. And who doesn't love a brilliant blue sky?

But I know it's the color that's causing my outward disgust with these cards because I don't have the same disdain for this card: 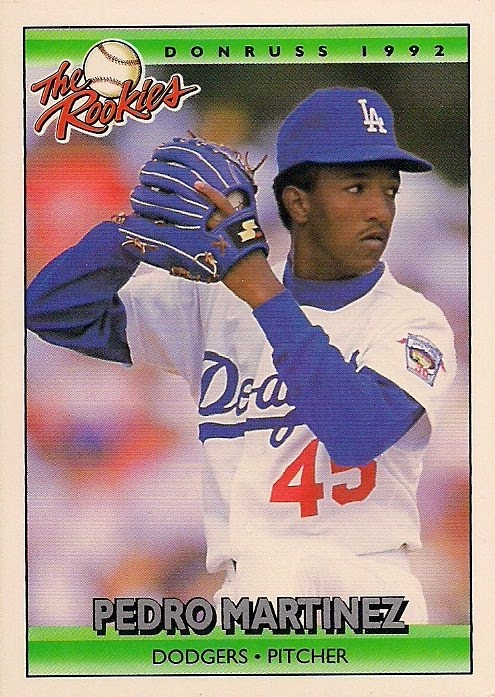 This looks fine to me. I like it. The green -- even though it looks like slime -- is not nearly as repulsive as the blue.

Of course, I might be biased because of the player on the card. 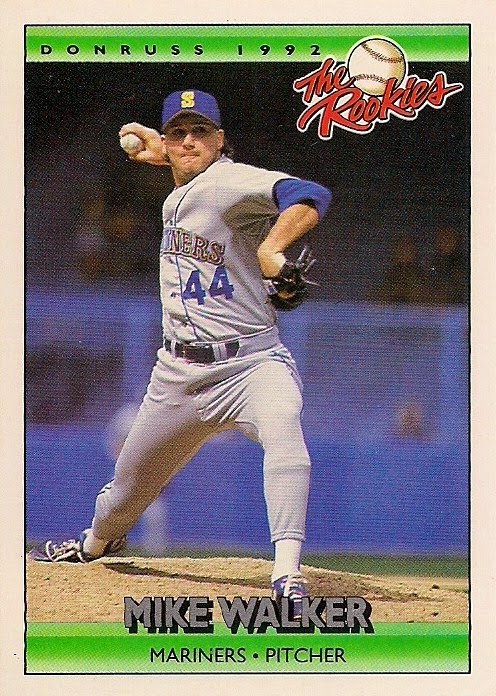 But no, even with this card of this Mariner person, it's still not bothering me.

Now, it might be because I haven't seen the green-bordered Donruss rookie cards nearly as much as the sickening blue-bordered ones. Or maybe it's the "The Rookies" logo that is off-setting my rage.

Maybe if I had a whole bunch of green-bordered '92 Donruss base cards, I wouldn't like that either. I mean Donruss always seems to make the wrong choice. Those 1990 cards should have been blue bordered, damn it. (Yup, those blue borders wouldn't make me sick -- I definitely need a psychiatrist).

I think light blue is too weak for this design and that's why it's bothered me so much. I credit Donruss for trying to go understated after the pre-school disaster of 1991 Donruss, but it went to the other extreme and turned my derision into disgust.

The other fact is I have an issue with almost all of the sets from 1992. The '92 Score set is almost as awful as '92 Donruss. And '92 Fleer is an example of what not to do with green. The only redeeming set issued that year was the debut of black beauty Pinnacle.

And to top it off, I was not having a very good time in life in '92, and I think I took it out on the cards, and made '92 Donruss my personal whipping boy.

Because when you look at the photos, there's something worth looking at there: 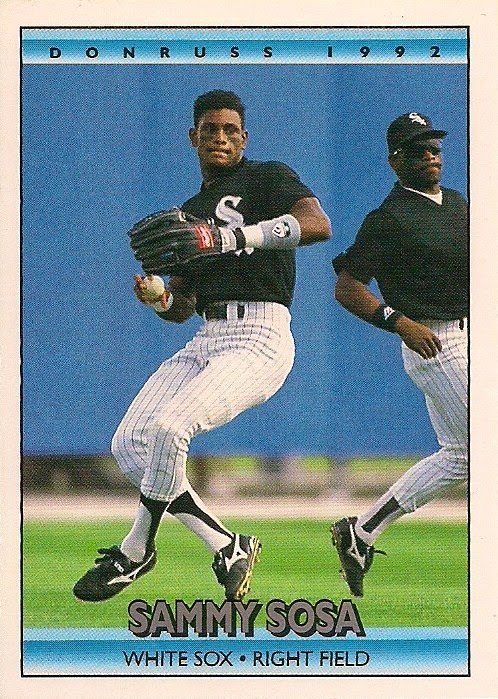 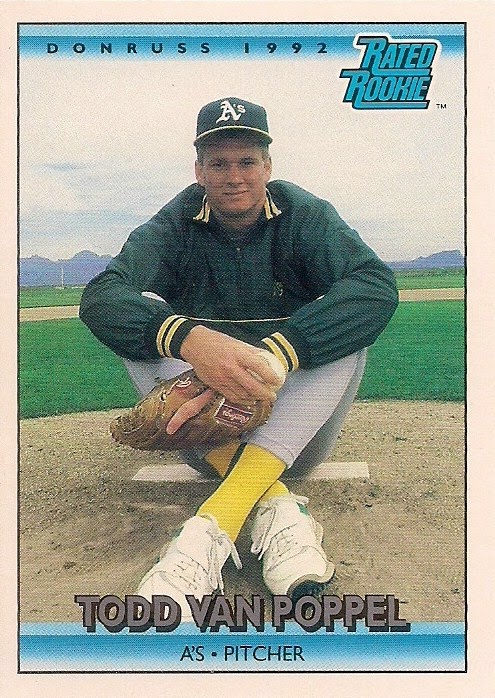 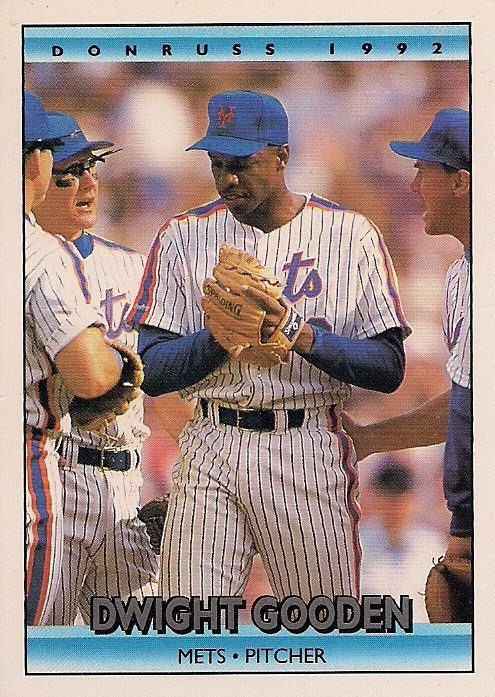 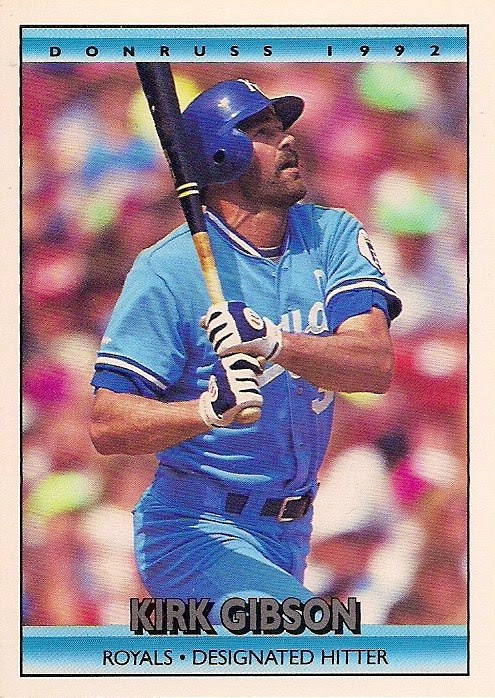 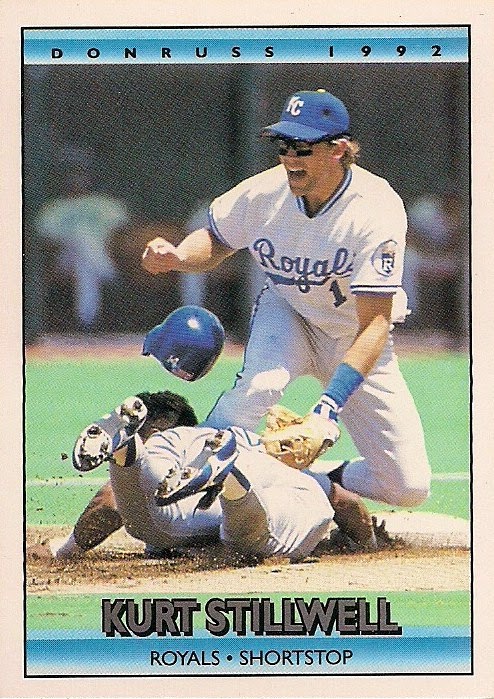 Except that now I'm overcome with revulsion for showing so many 1992 Donruss at one time. Someone get me a bucket.

The funny thing is that while writing this post, I could hear my mother say to me, "Hate is a terrible word. We don't use 'hate'".

JediJeff said…
(Note to passive aggressive self: do not send all 92 Donruss to the Owl because you will get a good laugh out of it.)
September 4, 2014 at 7:51 PM

BobWalkthePlank said…
Now I have two memories of this set. My mom picking me up packs at the local drug store growing up and your extreme hatred of this set.
September 4, 2014 at 9:09 PM

Laurens said…
When I first saw these cards and may have bought several packs, I thought Donruss had made some sort of leap towards being a premium product - the quality was decidedly not like the ones in prior years and these cards were going to be worth more than your junk wax drivel.
September 4, 2014 at 11:20 PM

Stubby said…
Well, Night Owl, I'm with you 100% on this. When I go through my cards, '92 Donruss makes me feel the same way and I think I, too, need a shrink (group therapy perhaps?). And, just as with you, its the blue ones that disgust me. And, like you, I'm a big fan of blue, normally. And, just like you, the green ones don't bother me at all. In fact, if I'm going through a box with both, I can feel my body go from intense dislike (blue) to warm nostalgia (green) and then back again (blue). I feel like a sour patch kid or something. And I bought and have a TON of the green ones, so its not just that the blue ones are more ubiquitous. I say we just blame Donruss and stop second guessing our revulsion. Besides, I can't afford a shrink.

Swing And A Pop-up said…
At first I was going to ask you if you had ever considered decaf, but then I ended up agreeing with the majority of your past. As far as baseball cards go (and most other things), 1992 did suck.
September 5, 2014 at 12:11 PM