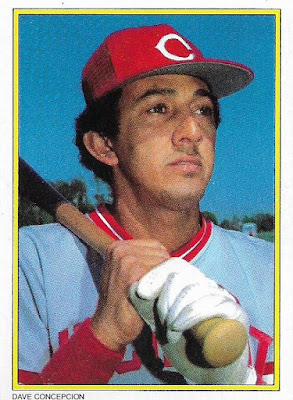 I wanted to write about the 1983 Topps glossy send-ins because I had recently decided I need to complete the 40-card set.

So last night after work (and driving through a foot of snow), I wrote up a whole post on my love for the very first of the glossy send-in sets and just before hitting "publish," realized that I had basically written the entire post seven years ago.

Well, the cards are scanned already, now what?

My curiosity is always buzzing so it wouldn't allow me to let go of the 1983 glossies that easily. I looked at the ones that I owned -- all of them obtained back in 1983 from sending in those "runs" cards that allowed you to pick a group of five glossy cards. I wondered if I could figure out which groups I ordered back then and why.

I have 19 of the cards, which is interesting because there were eight groups of five cards each for 40 cards. Nineteen cards means I ordered my five cards four separate times, but somehow lost one of the cards. How'd that happen?

Fortunately, the numbered checklist pointed it out for me. 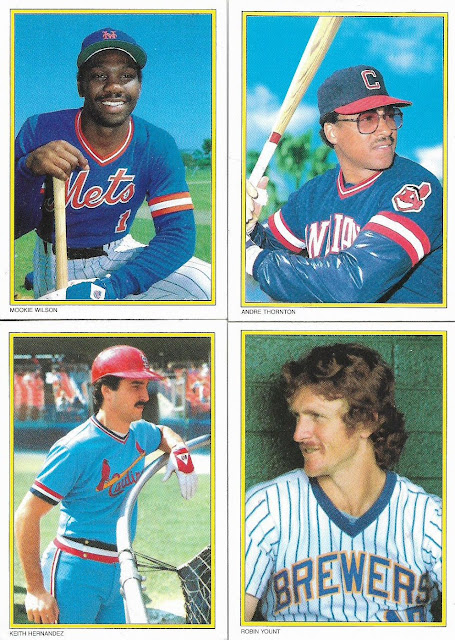 I have just four from that group, Wilson, Thornton, Hernandez and Yount.

That means Yaz is missing. Why is Yaz missing?

I took an online peak at the Yaz '83 glossy. It didn't look familiar at all. That probably means only one thing: I had traded it immediately to my brother upon receiving the five cards in the mail from Topps.

This was the rule of law in our house among my brothers and I. If we were to obtain a card of a player from the others' favorite team, we MUST trade it to that brother. Yaz was as good as gone when I ordered the five-card group.

So, which other groups did I order? 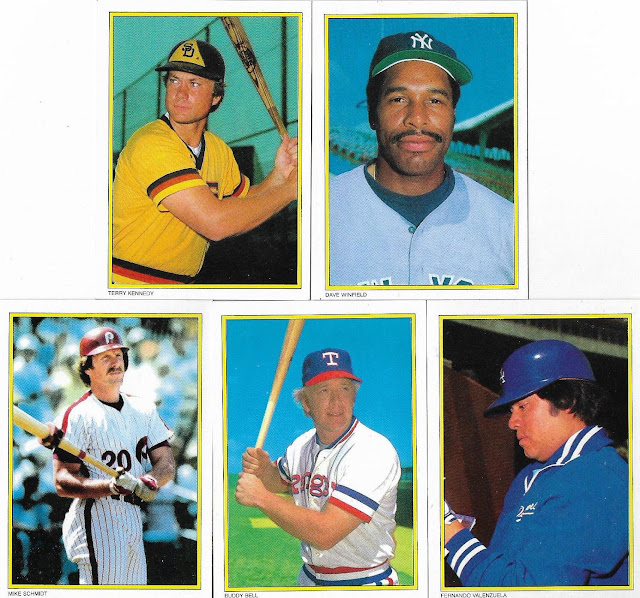 I ordered the second group, cards 6 through 10.

This is likely the first group that I ordered, as soon as I accumulated the "25 runs" I needed, because of the Fernando Valenzuela card. I don't remember actually receiving this card, but I'm sure it was a treat.

The next two groups I skipped. The third group, cards 11-15 contain Rich Gossage, Bob Horner, Toby Harrah, Pete Rose and Cecil Cooper. Even with the childhood favorites of Harrah and Cooper there was no need to choose that one. The fourth group, cards 16-20, featured Dale Murphy, Carlton Fisk, Ray Knight, Jim Palmer and Gary Carter. That is a lot of star power, but I ignored it. Nothing there fit in my collection.

The fifth group, meanwhile, contained another Dodger, and I'm assuming I snapped up this one next. 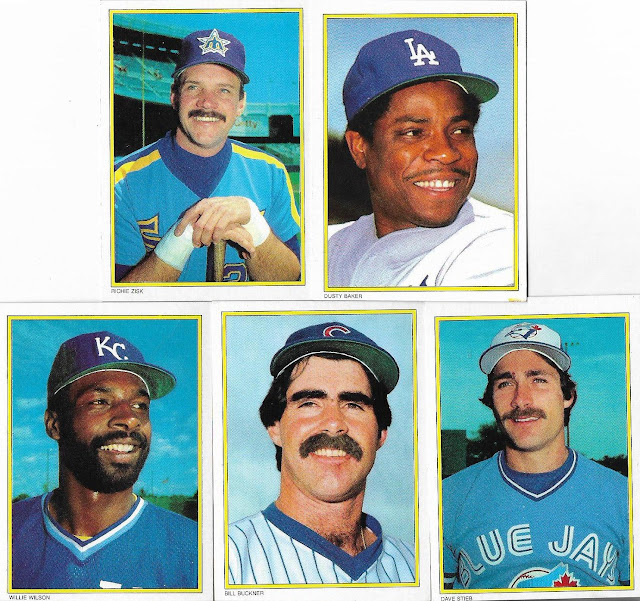 This selection, of cards 21-25, may be the lightest on star power but when I see a Dodger, nothing else matters. Sure I'll add a Mariner and a Blue Jay. DUSTY!

This also explains why I skipped the sixth group, cards 26-30, which is packed with key players and now I need them all. Those fellows are: Bill Madlock, Lance Parrish, Nolan Ryan, Rod Carew and Al Oliver. Bummer.

I did order the seventh group, cards 31-35. It contains no Dodgers. It doesn't contain any cards from my brothers' favorite teams either. 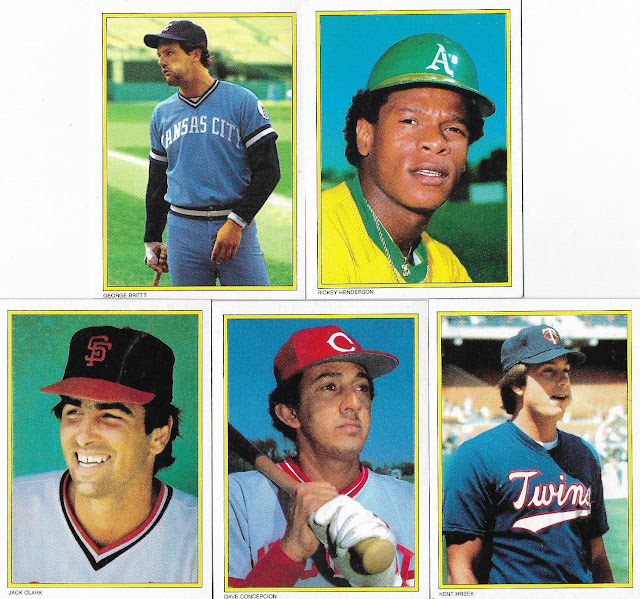 My guess is I ordered this one because George Brett was a favorite and also it contained two young stars from that period, Rickey Henderson and Kent Hrbek. The other two, both from teams I disliked quite a bit at the time, came along for the ride.

The eighth-and-final group that I skipped also contains a number of notables. In cards No. 36-40 you'll find Steve Carlton, Eddie Murray, Ruppert Jones, Reggie Jackson and Bruce Sutter. Four Hall of Famers, that's all. Sheesh, why didn't I pick that one?

So maybe I didn't do the best with my send-in selections, but it served my collecting needs all the way up until now when I'm looking to complete the set.

This set won't be tough to complete. Each of the missing cards are around a dollar apiece. This would've surprised me way back in 1983 because sending away for cards that you couldn't find anywhere else seemed pretty exclusive at the time (then again, a dollar per card would've sounded enormous).

Anyway, here is how the cards were grouped together in checklist form: 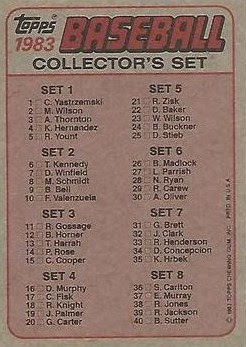 I don't remember seeing this checklist. And neither version of the fronts are familiar: 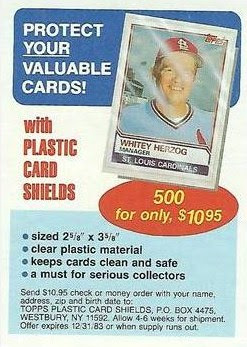 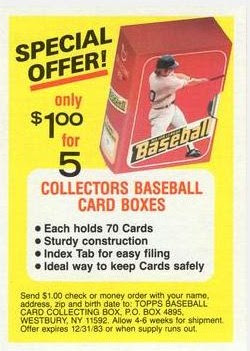 So that's a lot of digging into something that is of interest to only me. But at least it got me to put up a 1983 Topps glossy send-in want list on my main want list page.

To me, this is the only glossy send-in set that matters. The ones that came after, with the green borders and orange borders and blue borders and especially those that you didn't send away for but appeared in rack packs, just don't seem as special as the yellow-bordered beauties.

I mean if I can write about them in two separate posts seven years apart with the same amount of passion, they must be special. Either that or they're so forgettable that I can't remember writing about them the first time.

Peter K Steinberg said…
It's one of my biggest fears, writing the same thing more than once. But seven years in blog terms is beyond the statute of limitations so it's like the first one almost never happened. Good luck completing the set!
December 7, 2018 at 7:37 PM

Commishbob said…
1983 was right near the end of my 'buy two of everything' phase of collecting. There were shows every weekend and card shops on seemingly every corner. One of the dealers I frequented put these sets together and sold me one. I recall that Fernando card very well. All that's left now are the Palmer and Murray in my O's star binder.
December 8, 2018 at 12:55 AM

Baltmoss68 said…
I ordered a lot of these like you did. I have the full set... no brothers to trade with... and a few random singles usually found in dime boxes. Kind of forgotten treasures from that era.
December 8, 2018 at 10:46 AM