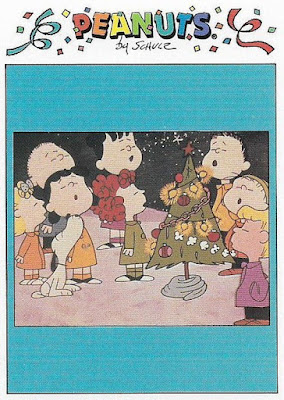 An advantage to living in the north country is that it snows at this time of year. As I write this, I can see snow falling gently in the backyard. ... The key part of that last sentence is "gently". There is no wind-whipped, sideways snow that will lead to two feet in the street -- as is often the case. Instead, there is just what weather forecasters would describe as "a coating" on the ground.

In the mailbox today, I found two card packages that I will showcase after the holiday. It is incredibly pleasant to receive cards in the mail on Christmas Eve.

Best of all, the kid is back safely from college.

So the holiday is lining up fairly well, which I appreciate because I've always enjoyed this time of year. Too often in the online world I'm left to feel somehow uncool because I enjoy Christmas. I don't think all Christmas music is dreadful, I don't despise my family members, I don't believe the holiday period is an excuse to foist my political thoughts on unsuspecting merry wishers. I like Christmas and the season mostly because it's happy. I like happy. I believe in being happy even when faced with a difficult situation or in difficult times -- and I've had a lot of experience with that this past year.

I was born the same year that "A Charlie Brown Christmas" made its television debut. That means for every year I have been alive, and only the years that I have been alive, that famous special has aired. It is my favorite Christmas special (not going out on a limb there) because it is simple, yet sophisticated and tells the tale of someone trying to keep it together while Christmas spins out of control all around him. Charlie Brown refuses to get cynical about the holiday. And it's nice to have one day on the calendar that is cynicism-free.

The above card is from a small 1991 card set issued by Tuff Stuff Magazine. It is a 33-card set called "Peanuts Preview" that features cards of Peanuts characters and notable Peanuts storylines (mostly having to do with Snoopy), and focuses on some of the famous Peanuts TV specials, like the Christmas special card, which is the last card in the set. Peanuts creator Charles Schulz autographed one of each card in the set, which makes them very coveted. 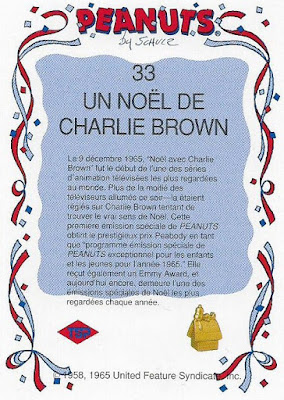 The card back that I have is written in French. Apparently there is a French version of this set. The backs are quite interesting for any Peanuts lover as they list certain factoids such as the date when a specific character made its debut in the comic strip.

I don't have much other knowledge about the set, like why it's called "Peanuts Preview" or why it was issued. I didn't even know Tuff Stuff made card sets. Tuff Stuff also issued a set recalling the 50th anniversary of Pearl Harbor that year. Now that's two polar-opposite card sets!

Anyway, the heyday of Tuff Stuff is exactly when I stopped paying attention to hobby news and even collecting. But I sure do like that I own a card recognizing the Christmas special, which became the standard for the glory days of animated Christmas specials that followed in the '70s and '80s.

As a child, I sat watching the special in rapt attention, cookies and milk in front of me, and I recall all my favorite parts back then: Charlie Brown and Linus shopping amid metallic Christmas trees, the kids dancing in the auditorium, Snoopy's lights and display contest-winning doghouse (Unlike his owner, I never had a problem with Snoopy's lights).

It is the only Christmas special that I make sure I see every year.

A very happy holiday season everyone.

Billy Kingsley said…
Merry Christmas Greg, I hope for a better year for you next year, I know you've mentioned that it's been a trying year for you. I believe the Christmas Special also has a card in 2011's Topps American Pie set, although it pictures Shultz himself and not the show.
December 24, 2018 at 10:05 PM

Mark Hoyle said…
Merry Christmas Greg. Last yr a local movie theater was showing all the old tv Christmas specials on their big screen. I brought one of my granddaughters. One of the movies they showed was the Peanuts Special.
December 24, 2018 at 10:17 PM

Nachos Grande said…
Merry Christmas! I also love that movie - and the soundtrack is a "must play" each holiday season.
December 25, 2018 at 6:16 PM