'56 of the month: Bobby Shantz 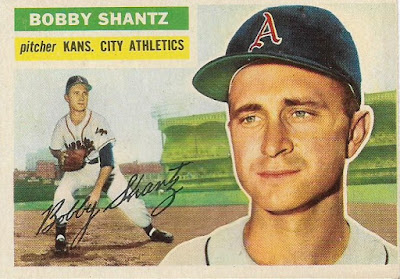 Bobby Shantz is a familar player from my childhood.

No, I'm not 72 years old. But I did collect baseball cards in 1975 and as you know that was one of the first Topps flagship sets to feature players of the past in a current set.

The '75 MVP subset, as Topps congratulated itself for making it through 25 of years of creating baseball cards, displayed a card of the AL and NL MVP for each year between 1951 and 1974.

This is one of the cards I pulled during my first collecting year in '75: 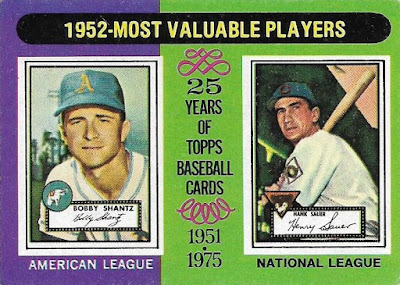 THIS is one of the card I pulled during my first collectin year in '75: 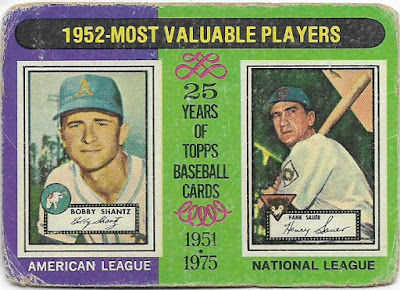 Even with the thoroughly rounded corners, you can see Bobby Shantz on the left. He was named the MVP after winning 24 games for the Philadelphia A's in 1952.

This is what the card said about that season: 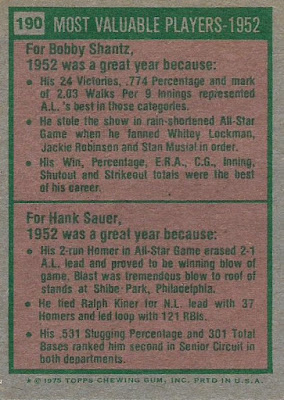 I am impressed with the mention of the walks-per-inning on a card from 43 years ago.

All in all, certainly a great year for Bobby Shantz. But it doesn't mention another impressive stat that I found on the back of another card -- the 1956 Bobby Shantz card. 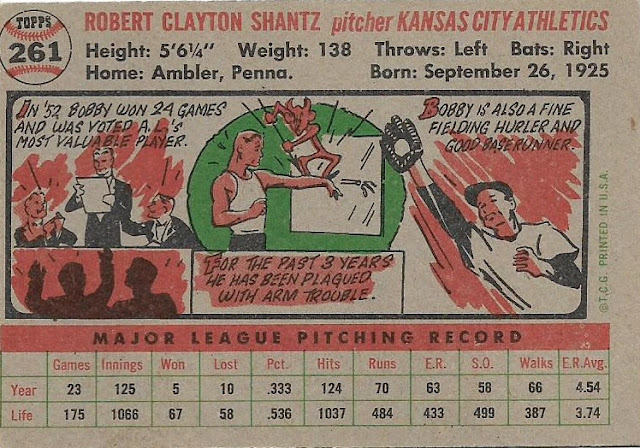 There is mention of Shantz' MVP season again and it wouldn't be '56 Topps without a cartoon demonstrating arm pain by having a tiny devil poke the poor pitcher's forearm with a pitchfork. Awesome.

Move a little higher on the card and you'll see Shantz's height: a mere 5-foot-6 (AND one-quarter, don't forget the one-quarter!). Shantz's diminutive stature is well-known, it's a running theme in his SABR biography.

But what intrigues me most is Shantz's listed weight. 138 pounds!

I have never seen such a light weight for a major league baseball player.

Then there are the notable flea-flickers of the distant past. Rabbit Maranville is listed at a healthy 155. So is Joe Sewell. Then there is Wee Willie Keeler. His nickname is "Wee Willie" for crying out loud! But he weighs in at 140, at least two pounds more than Bobby Shantz.

So the question remains, is Shantz's weight one of the smallest to appear on baseball cards?

It's just one of the smallest because of Eddie Gaedel, whose cards list him as weighing 65 pounds, because that's what 3-foot-7 people weigh. But aside from him, there can't be many players who were more of lightweight than Shantz.

Shantz, who is still clicking along at 93 years of age, is actually listed as weighing 153 pounds on his 1952 Topps card, the one that appears on the 1975 Topps subset. Then, on Shantz's 1953 card, his 138-pound weight debuts and it remains there until his 1958 Topps card when he's listed at 151 pounds. The cards for the rest of his career list him around 150 pounds.

It boggles my mind that a 5-foot-6, 138-pound guy could win 24 games and strike out 152 batters in one season. Sure, it was a different time, but the size of players isn't that different than it was then. That is one of the reasons I like baseball -- it's not a freak show like some other sports.

And even the height isn't that mystifying to me, having seen so many short players excel over the years.

Guess I should've worked more on that curve ball.

Johnnys Trading Spot said…
definitely a middle infielder stature. rebel and didn't know it or did he?
December 2, 2018 at 7:56 PM

Brett Alan said…
It will be interesting to see how they handle the MVP subset in 2024 Heritage. There was no 2000 Heritage with 1951 style cards, so it actually won't be 25 years. But not having the subset would be really weak sauce, and waiting to put it with the 1976 style cards would be weird. They could also make it a celebration of Topps' entire history, but it would not be a round number (it would be their 74th year).

One thing I'd like to see is parallels which so the flagship cards instead of the Heritage card. But showing old a Heritage designs is suitably meta.

RunForeKelloggs said…
Great post. I found only one player after 1929 whose listed weight was less than 140 - Pat Ankenman. Thanks for getting me to learn about another player I'd never heard of before. You might have heard of him since some of his 15 games were as a Dodger.
December 2, 2018 at 9:59 PM

Mike the History Teacher said…
I've often wondered how often card companies updated the players' vitals since a player with a lot of cards from different companies often has various weights given. The go-to baseball sites add to the uncertanty on Shantz. MLB.com, Fangraphs and Baseball Almanac and Baseball Cube all list him at 142, but B-R says 139.

Thank you for helping me appreciate the 56 set more and more. Like you I really like vintage cards over most of the stuff from the last 25 years. All of my 56's would fit on one side of an eight-pocket sheet, but at least once a month I get to enjoy your set from afar.
December 2, 2018 at 10:06 PM

Matt said…
That cartoon has to to be among the all-time best! Extra credit for the bony X-ray behind the devil!
December 3, 2018 at 11:12 AM

Fuji said…
Wow. He's a lightweight. Love that you kept your original 75' Shantz/Sauer. I regret no holding onto more of my childhood cards over the years.
December 3, 2018 at 4:05 PM

Michael Ott said…
I was confident Tom and/or Dee Gordon were of comparable stature, but the vitals on their cards say both had a couple of inches and at least 10lbs on Shantz!