Thanks, mom, for not throwing out this card 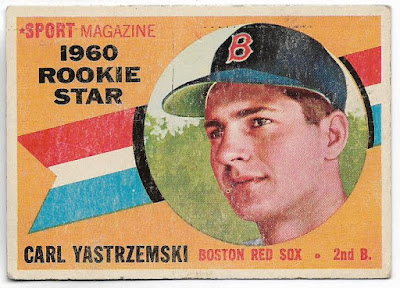 I had no plans to participate in the Big Fun Game over at Willinghammer Rising. I remember when Napkin Doon was running the BFG and it seemed like a lot of strategizing and paying attention. Nope, I didn't have time for that.

But Breakdown Cards volunteered me for the BFG and I was officially in, so, heck, I guess I had to pay attention now! And then, JBF randomized the names and I came up as selecting last. That's the perfect spot for someone who's no good at strategy (see: my fantasy baseball teams). I could sit and wait and watch while everyone else selected, and without worrying whether someone was going to steal the card I wanted.

When my turn came, the best card of all the really nice cards offered up by JBF in the BFG was up for grabs. And I grabbed.

The glorious Carl Yastrzemski rookie card from 1960 Topps -- one of the most notable cards of the '60s -- is now mine.

The card is so notable that it has been a topic of numerous Topps reprints over the years. I happen to own one from the 2010 Cards Your Mom Threw Out series. 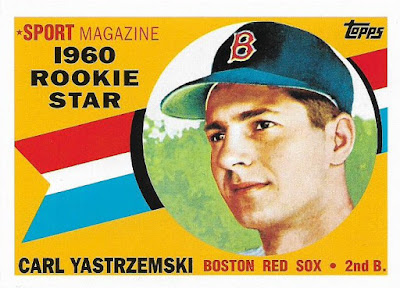 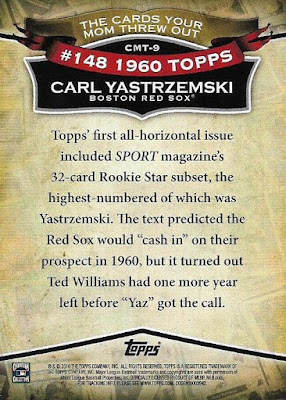 Moms get a bad rap in this hobby, always being accused of throwing out their kids' cards. On Mother's Day, I'm here to tell you that I believe this was a scurrilous lie concocted by hobby dealers and card companies to proclaim the rarity of old cards.

Well, I'm happy that at least one 1960 Topps Carl Yastrzemski card was not thrown out by mom. It now resides in my collection. 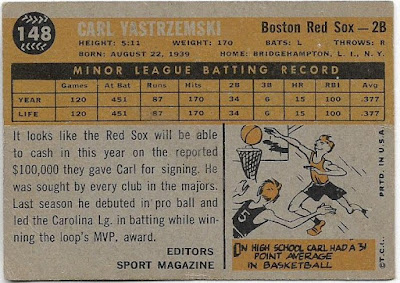 There were lots of fine cards offered up in the Big Fun Game -- an '89 Upper Deck Griffey, a rookie Ichiro, a real interesting mystery box. But my heart is set on vintage and cards like the Yaz will always be in demand (thanks a lot, Mom!).

JBF also threw in some other cards to keep the Yaz rookie company: 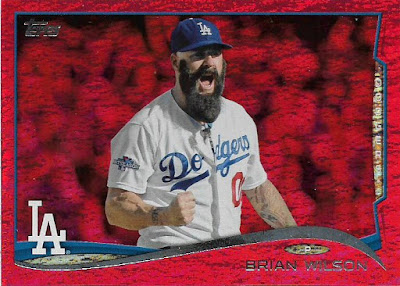 Let's scratch this one off the want list and never speak of it again. 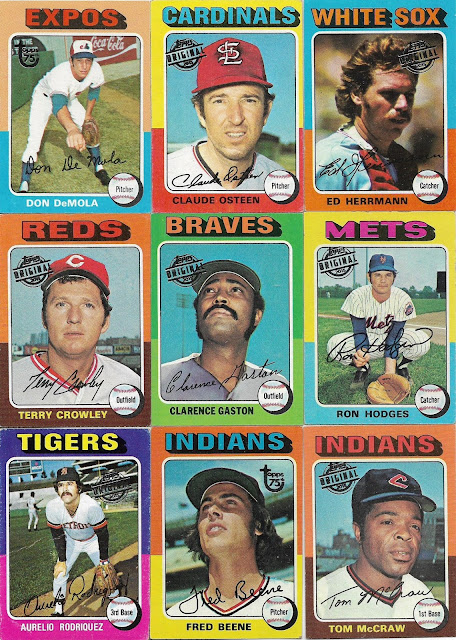 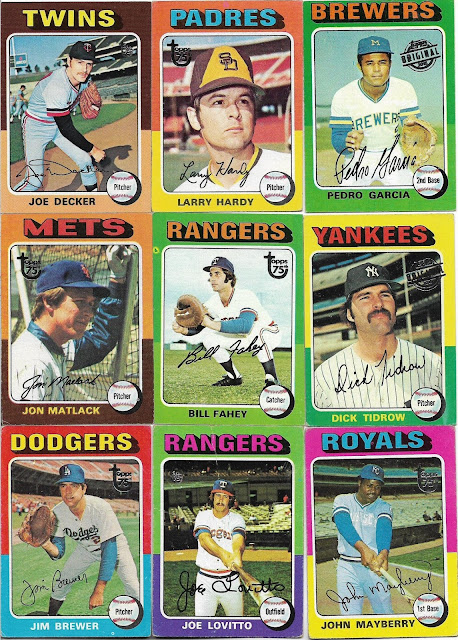 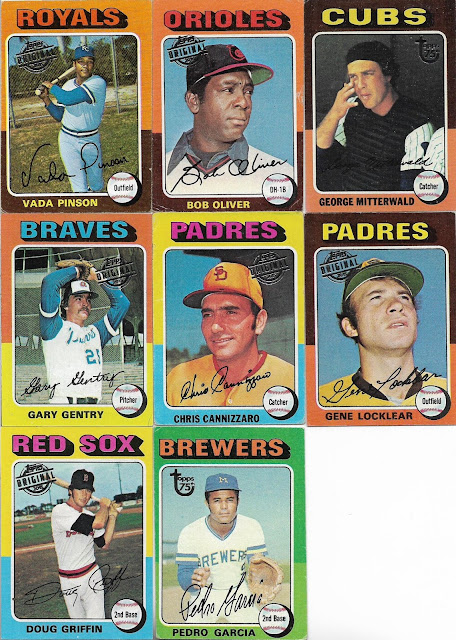 I have some of these already but the vast majority I do not. In fact, I took the Hodges and Pinson out of my online cart thanks to Wes. And also thanks to him, I now have 162 buyback cards from the set! Come on, 200!

As I've mentioned many times before, my mom has never been a baseball fan, but she was the one to get me started on this hobby when she bought some Topps cello packs for my brother and I at the grocery store in 1974.

That single act led me to everything that you now see on this blog, including the Carl Yastrzemski rookie card.

And for the record my mom never, ever, ever threw out my cards.

You may not want to talk about it, but the Blood Red parallels are my favorite parallels. I think I may be up to a little over half the set. I may never complete it, but that won't stop me from trying.
May 14, 2017 at 8:04 PM

Mike Matson said…
Nice cards..
That Wilson card though, with the effect on it makes his beard look like it's glued onto his face..

Fuji said…
Sweet Yaz rookie. That was one heckuva contest. Glad to hear your mom didn't throw out your childhood collection. Mine didn't either and I'm super grateful for that. Heck... my parents still store more than half of my collection in their garage. ;)
May 14, 2017 at 11:36 PM

steelehere said…
I've seen enough of these on this blog to ask, "Do 75 Buybacks exists for the stars and rookie cards in the set?" I've never seen a big card
Iike Pete Rose, Nolan Ryan, Robin Yount or George Brett as a 75 buyback anywhere online yet.
May 15, 2017 at 12:20 AM