May 13, 2017
(Welcome back. I've just been informed that today is Blame Someone Else Day. That's right, social media, you've got just ONE DAY to blame someone else. Not 365. It's time for Cardboard Appreciation, this is the 256th in series): 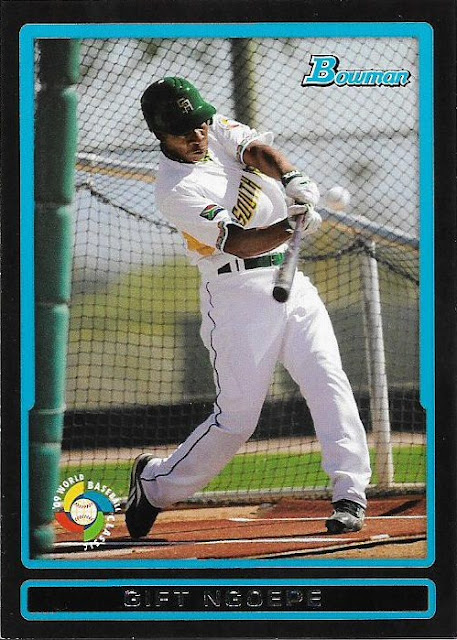 OK, now that everyone has dug out their Eric Thames cards, have you done the same for Gift Ngoepe?

When I heard a couple of weeks ago that the Pirates were calling up Ngoepe, thereby making the South African-born player the first African to play in the major leagues, it made me even happier than the re-emergence of Thames.

Yeah, sure, there's the whole thing about MLB conquering another continent and "growing the game" and all that, but the big news is that my World Baseball cards from several years ago now had meaning!

I don't follow the World Baseball Classic. I know that makes me shallow and narrow-minded and a social outcast. But I have all I can do to keep up with baseball happening here. Don't make me feel guilty about not following baseball in Italy. I've already got guilt about not knowing all the prospects in the minor leagues.

However, I did remember that I had a card of Ngoepe. I couldn't recall what it looked like or what year it was from, but I remembered the name. I dug it up and rejoiced.

Yay! A WBC card that has graduated to the major leagues!

The story of Ngoepe is pretty cool -- he was actually born on a baseball field. And although interest in him has cooled a bit as his stats have slid and the Pirates have struggled, it's still apparent that his cards are in high demand.

I just conducted a COMC search for Ngoepe cards.

This is what I found: 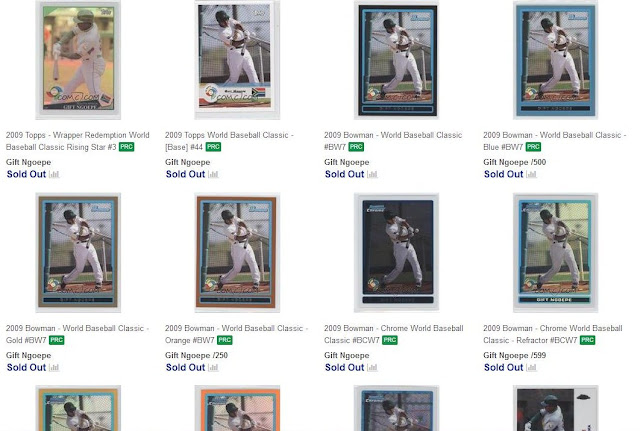 A whole bunch of Sold Out Ngoepes.

Then I filtered out the sold-out cards and this is what I found:

That made me very happy I owned a Ngoepe card.

His cards are going for the usual inflated prices on ebay. And you can buy a ToppsNow card of Ngoepe in an actual Pirates uniform for too much cash. But all of the hype will fade soon and his card prices will come down and the Ngoepes will return to the COMC queue.

All I know is I have taken my one Ngoepe out of the box of "what am I going to do with these" cards, slipped it into a top loader and set it in a place of honor in my card area, so I can admire it for a little while.

I hope he sticks around for a good while.

Zippy Zappy said…
Gift Ngoepe's callup was after the Pirates had promoted the very first Lithuanian born MLB player too (Dovydas Neverauskas). I love it when people who aren't from traditional baseball countries make it to the big leagues. I want to see even more. Holding out a lot of hope to see even more big leaguers from places like India and the former-Ottoman Empire to join the fun in my lifetime.
May 13, 2017 at 8:26 PM