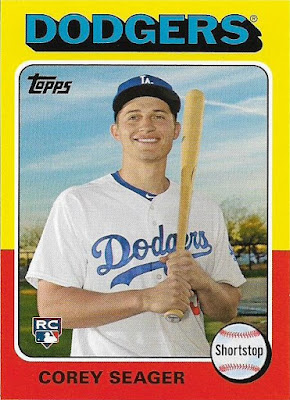 Yup, I've got another online-only set for you today. But at least I wasn't the one who bought the cards this time.

This delightful Corey Seager 1975-style mini, issued last year, arrived from R.C. He's the one who sent the '75 mini Kershaw previously. That one came from a 10-card set that accompanied the 2015 Topps mini set. I'm not sure if Seager here was packaged the same way.

I have a hunch that it was though, because Seager came with six buddies! 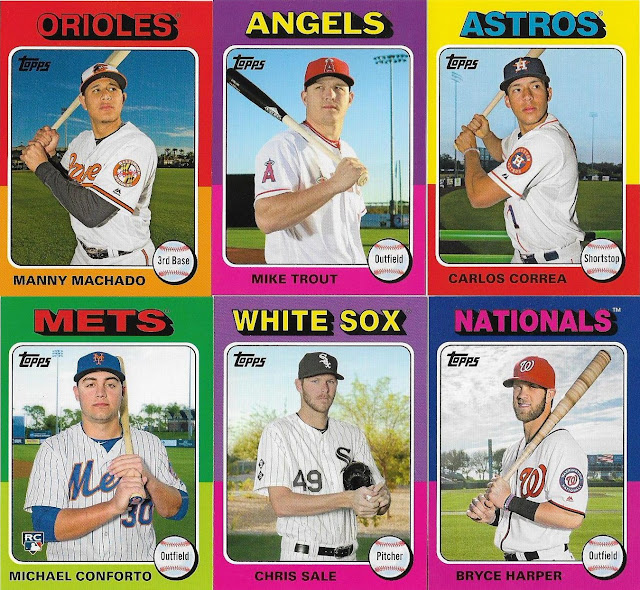 Good gosh, I sure do love those bright '75 colors. The color schemes are fairly accurate here, except for the Harper, which is way off. There was no such color combination in 1975 Topps. Also, the red-orange combo, featured on the Machado, should have blue team letters, not red.

You may have noticed that adds up to only seven cards. That's because R.C. paid attention to my directive and took the three Cubs out of there!

OK, well, actually, he's a Cubs fan and wanted Arrieta, Bryant and some other guy for himself. Fine by me.

In fact, as pretty as the above cards are, I don't plan to keep any besides the Seager. You'll probably see these in future trade packages.

But before I get rid of them, I'd like the explore the backs. 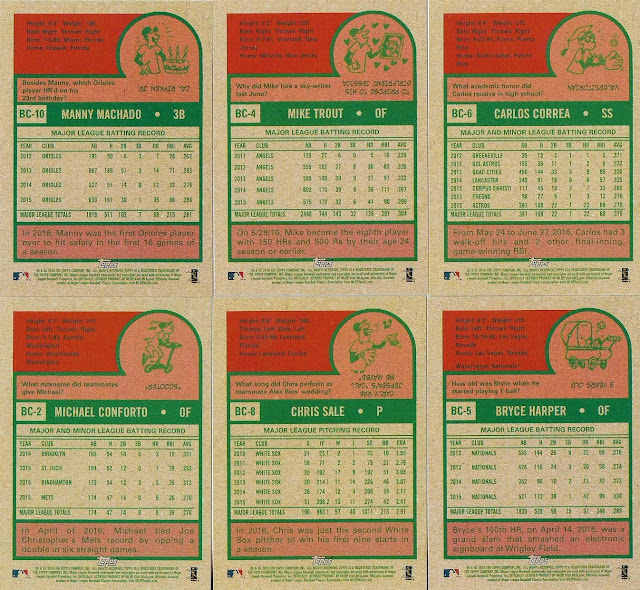 You can see that unlike the previous year's '75 mini exclusive, which featured no stats and just a write-up, the full stats do appear. Yay! There's some weird spacing with Machado and Conforto, though.

Also, Topps took the cartoon images straight from 1975 Topps cards. The questions are specific to the player featured on the card, but the cartoons are more than 40 years old.

I fished out the actual 1975 Topps card backs with the above cartoons, including Seager. 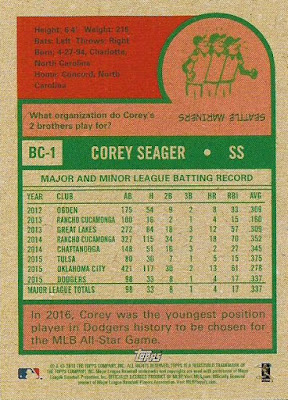 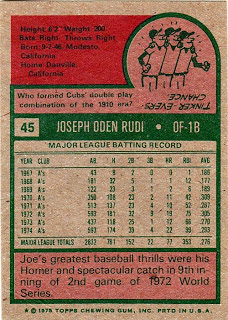 Corey Seager goes with Joe Rudi. The drawing was originally about Tinkers, Evers and Chance. The Seager trivia question is no longer correct as Justin Seager is now in the Texas Rangers organization. 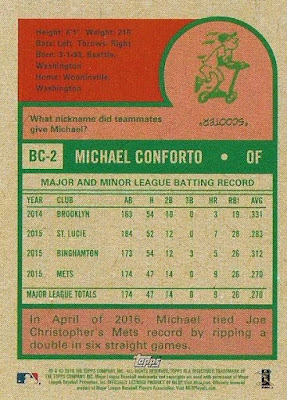 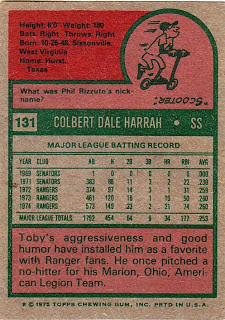 Michael Conforto's cartoon goes with Toby Harrah. To me there is only one Scooter and they should have given Michael a different nickname. 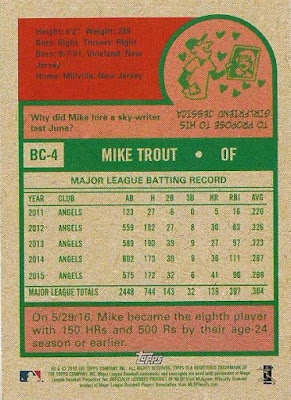 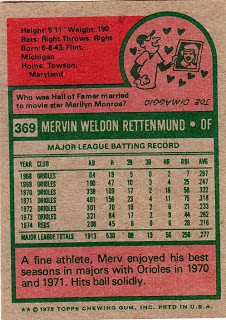 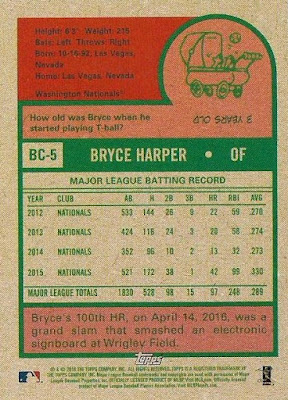 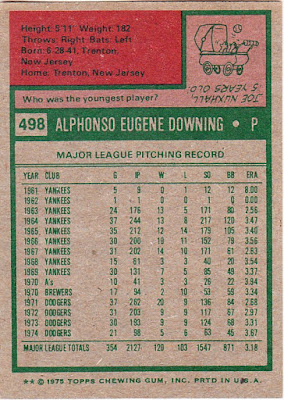 Bryce Harper goes with Al Downing. (There's a cartoon drawing on the back of J.R. Richard's card that is very similar). The cartoon originally cited Joe Nuxhall playing in the majors at age 15. 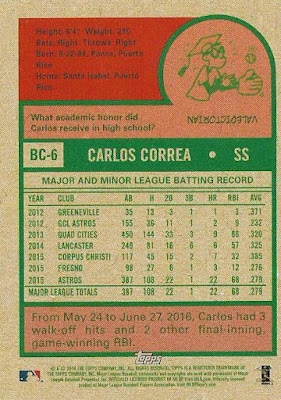 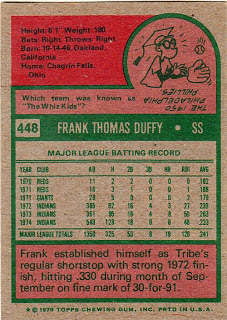 Carlos Correa's cartoon goes with Frank Duffy. I remembered the Duffy cartoon instantly when I saw it on the back of Correa's card. Duffy's cartoon was written for the 1950 Phillies Whiz Kids. 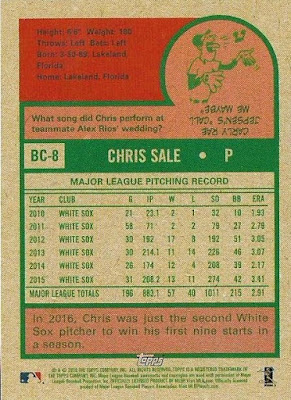 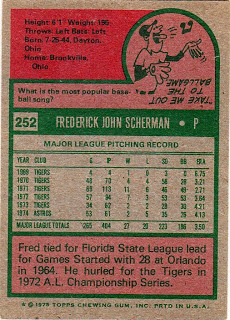 Chris Sale's cartoon goes with Fred Scherman. I think you have the entire range of music here between "Take Me Out to the Ballgame" and "Call Me Maybe". 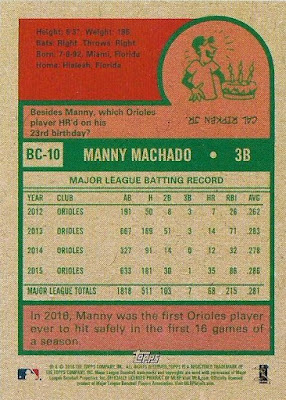 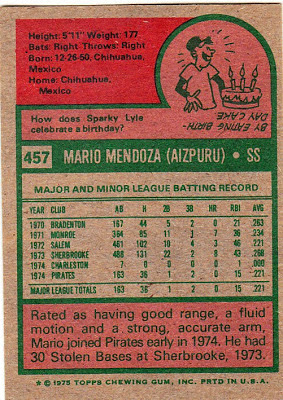 And, finally, Manny Machado's cartoon goes with Mario Mendoza. The famed birthday cake cartoon that originally cited Sparky Lyle's "fondness" for birthday cake (actually a fondness for sitting bare-assed on birthday cakes) has been transformed to Orioles who hit home runs on their 23rd birthday.

You can tell that the cartoon images on the current minis appear much more faded than the originals. I'm going to say they suffered from all the glossiness on the current cards.

Anyway, that's far more information than you wanted about cartoons, but it certainly satisfied my curiosity.

Laurens said…
Justin Seager plays in the Texas League, but it looks like he is still in the Mariners organization.
May 4, 2017 at 9:24 PM

night owl said…
Looks like you're right. I looked at a different site besides baseball-reference to save some time and must've got confused.
May 4, 2017 at 9:28 PM

BobWalkthePlank said…
Once this wave of Seager's start having kids they will be signed to contracts at birth. Good genes!
May 5, 2017 at 9:26 AM

deal said…
This is NOT more than I wanted to know about -toons. Cool research, I guess I need to add Frank Duffy to my Phils connection. and Thanks for the Sparky Lyle reminder.
May 6, 2017 at 9:12 AM